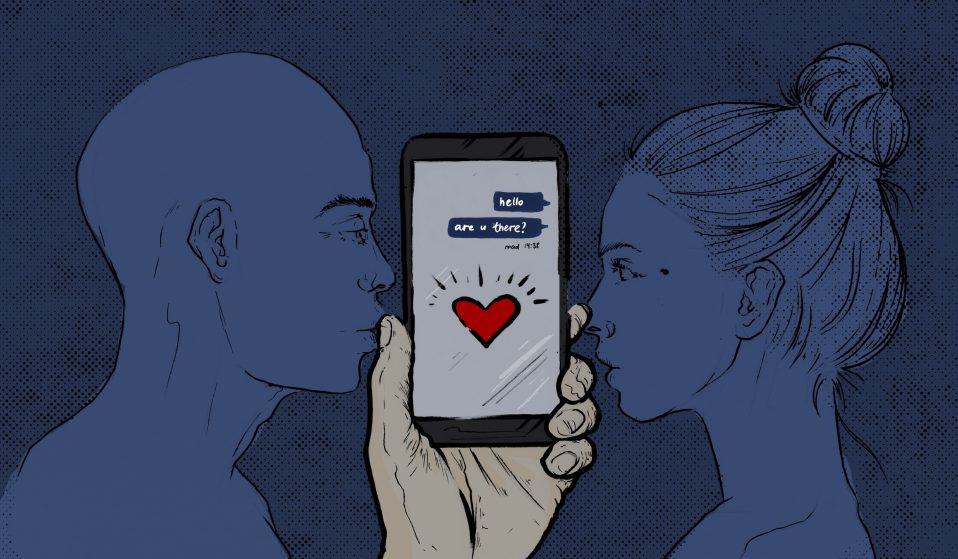 We’ve all been there: someone you’re talking to suddenly drops off the face of the earth. In the age of ghosting, it’s the not knowing that hurts the most.

We’ve all been there: someone you’re talking to suddenly goes quiet, dropping off the face of the earth. For journalist and author Emily Reynolds, it’s the waiting that hurts the most.

When you realise you’re being ignored, the world feels as if it’s warping somehow: an expansion. Everything takes a different tone; your vision swims with unfulfilled opportunity, sometimes with shame. Everything gets bigger. But you don’t expand with it; you stay the same size, a tiny Alice in Wonderland the size of a mouse, ready to be crushed. Your whole being shrinks: you wait, and that’s all.

We talk a lot about ghosting now; it’s one of the cardinal sins of modern dating. It’s happened to us all: someone we’ve been talking to on Tinder suddenly goes quiet, someone we’ve been dating for months decides they no longer want to speak to us. We even hear about people ghosted after years and years – friends of mine ghosted by people they live with, serious relationships. One friend’s partner moved out without a word; she never got an explanation.

We say we hate ghosting because it’s rude, as if it’s merely a matter of etiquette. It’s not. That’s not to say it isn’t rude: it is, deeply. But, at its core, our fear and hatred of ghosting comes down less to good manners and more to our desperate longing not to be made small by someone else, no matter how inconsequential they are to our lives in the long run.

This can seep into our attitudes to communication: we sometimes forget that people have their own lives, their own autonomy, their own reasons for doing things. It’s often as if we expect someone to drop everything they’re doing, feeling or thinking in order to text us back at a speed that makes us feel safe. But how many times have you chosen not to open a message to avoid someone seeing those dreaded blue ticks? How often have you thought, “I’ll reply to that later” and, busy with work or friends, resolutely failed to do that? How many awkward conversations have been avoided by your failing to have a conversation at all? But often we don’t extend this courtesy to others: so preoccupied with our own inner lives, we forget other people have them too.

But sometimes you really are being ignored, and you start to panic. They’re ignoring you because they’re busy, maybe: working, with friends, cooking, having a shower, on the phone, taking a piss. Maybe it’s because they’re stressed or sad or overwhelmed; maybe they just can’t face a conversation right now. Or they’ve lost their phone, their phone isn’t working; they’ve lost your number! Maybe your phone isn’t working (you text yourself: it is). So, obviously, they’ve been hit by a car; they’re dead; or, worse, they’re having sex with someone else right now. What they’re doing or why they’re ignoring you is sort of moot: the point is that in doing so they’ve invaded your brain like a parasite.

Sat waiting, I’m reminded of the urban myths that spread through my school when everyone first got the internet: whispers of videos of women in heels stepping on puppies. I feel like one of those puppies, heel poised above my person, ready to be crushed by a stiletto to the face. If only the pain of rejection would only come, though; if only I had something concrete to deal with. A kitten heel lodged in my brain; a broken heart; a bruise. But I don’t: I have nothing but my shrunken self, waiting in the palm of somebody else’s hand.

And it’s worse. It’s worse than a heartbreak because it’s so uncertain; it’s worse than a heartbreak because to wait is to lose sight of yourself, locked as you are in the shadow of another person’s apathy. It’s worse because you know the pain will come at some point but you don’t know when; it’s worse because each relief, each hastily composed and uninterested response, simply strengthens your resolve to wait longer, a new pathetic low.

And it hurts because you’re just not sure what’s happening, because you don’t know who you are to someone, because the anticipation of pain is sometimes so much worse than pain itself.

Linkedin
RELATED ARTICLES
OTHER ARTICLES
A new law change is enabling Britain’s donor-conceived children to know the truth about their origins – but campaigners say the fertility industry must do more to protect people.
A recent High Court ruling against the right to wild camp in Dartmoor National Park sparked the largest land protest in history – and campaigners say their fight is not over yet.
David 'Dee' Delgado’s photo project is about honouring and uplifting the city of his youth, and a world rapidly disappearing under the relentless onslaught of gentrification.
Filmmaker Laura Poitras discusses her new documentary which traces the remarkable life of the artist-activist and the impact of her battle against the US opioid crisis.
Since 2007, Gideon Mendel has made 20 trips to document floods in 13 countries. The result is an alarming record of what has already been lost to the climate emergency.
A new podcast is opening up the conversation between trans women and trans amorous men in the hope of building coalitions.