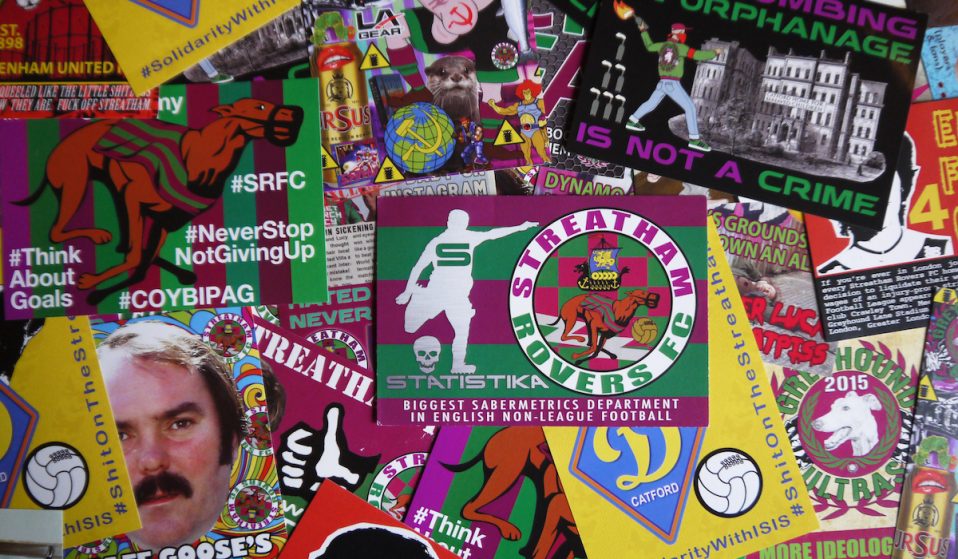 Caught up in a purge of parody Twitter accounts after fake news barged onto the general election agenda, beloved (and imaginary) non-league side Streatham Rovers now face an existential threat.

Streatham Rovers are not like other non-league football clubs. Once sponsored by Herod Eviction Services, their shirts are now emblazoned with the logo of a shady Russian public relations firm called the Internet Research Agency (or ‘IRA’ for short). The Greyhounds, to use the club’s nickname, have a supporters’ association called the Streatham Hardline Independent Trust (or ‘SHIT’), while their hardcore fan group, the Greyhound Ultras, have alternatively been described as “anarchist” or “hard left” and have been known to paste south London with stickers bearing slogans like “Marx woz a Rover”. They have a fierce rivalry with Dynamo Catford in the Xtermin8 Rat Poison Football League, while the club’s motivational hashtag, #NeverStopNotGivingUp, epitomises their philosophy on the game.

The only thing is, in case it isn’t already obvious, Streatham Rovers do not exist. Well, at least, they do not exist in the traditional sense. While they have received support from such political luminaries as former England goalkeeper Peter Shilton and soon-to-be failed London mayoral candidate Rory Stewart – the latter offered to help with their ground’s dog poo epidemic, before belatedly attempting to get in on the joke – Rovers are the brainchild of a demented Twitter mastermind who goes by the alias of Trevor Bastard. That didn’t stop them from featuring on Have I Got News For You, where the researchers were either too careless or too lazy to note that a team sheet on which the opposition players’ names were arranged into an acrostic which read ‘SRFC ARE SHIT’ was not, in fact, real.

The fact that Streatham Rovers reside outside of our reality hasn’t stopped them from amassing a bigger fanbase than many actual non-league sides. What’s more, like a many-tentacled demonic entity from the darker reaches of science fiction, the club has manifested itself, thrashing and screaming, in the real world. The club’s lurid green-and-purple kit has been made to order as have scarves, badges, stickers and other merchandise, all of which can be seen dotted around actual non-league grounds on weekends. There is even an unofficial supporters’ team which has contested everything from five-a-side kickabouts to fully meta 11-a-side games.

With such a committed cult following, many were genuinely devastated when Streatham Rovers were suspended from Twitter last week. Caught up in what appeared to be an aggressive sweep of ironic left-wing parody accounts after fake news chuntered onto the general election agenda, the Greyhounds looked like an innocent casualty of the factcheckUK debacle and Jo Swinson being forced to deny that she tortures and kills squirrels.

While it should be obvious enough that Streatham Rovers fall under the banner of parody (the club’s pinned tweet is a video of a robot going on a murderous rampage at their kit launch), the Twitter authorities clearly felt otherwise. After widespread outcry, the main account was restored, but several connected character accounts within the TBEU (or ‘Trevor Bastard Extended Universe’) remained suspended, including the Greyhounds’ inept manager Taff Goose.

The club’s view on the suspension is clear, with a resurrected Streatham Rovers tweeting: “The Club has become embroiled in completely false allegations that SRFC does not exist and is, in fact, an elaborate online prank… this club will not die just because of false and damaging rumours.” Trevor is not so sure about the club’s future, however, and fears a permanent ban may be imminent. “I never created it to trick people,” he says. “I created it to give people a moment of foolery, so they’d get that nice little shudder: ‘This ridiculous thing might be real. Ah, no, it’s not.’ If I really wanted to trick people I would have made it more realistic.”

It was only last week that the Conservative Party Press Office renamed itself ‘factcheckUK’ on Twitter in an attempt to deliberately mislead voters during a televised debate between Boris Johnson and Jeremy Corbyn. Yet CCHQ has retained its blue tick and received little more than a mild telling-off from a Twitter spokesperson. The fact that Twitter has gone after Streatham Rovers as opposed to the many serial liars with actual power is telling. Twitter routinely fails to respond to easily identifiable incidences of racial abuse, while it has been accused of tolerating violent ideologies like white nationalism. It feels like a surreal summary of everything wrong with the platform, however, that Twitter holds imaginary non-league football clubs to a higher standard over disinformation than the Conservative Party.

#OnThisDay Tony Blair is presented with a SRFC shirt as he launches his Millennium Vision to replace every council flat with a Pizza Express pic.twitter.com/VKaUcm31EM

The existential threat facing Streatham Rovers is also a sad reminder that many online creators don’t own their own output. Having started the Twitter account in 2016, Trevor finds the idea of losing almost four years’ worth of satirical endeavour immensely frustrating. “Half of me is furious at being wronged, half of me is like: ‘You idiot. This is a private company which doesn’t like its users and wants more normal people to buy things off adverts, and you’ve been using that as your canvas. Of course this was going to happen.’” That said, he’d still rather not lose his main medium. “It’s like a TV channel, Netflix or something, having a moderately popular series that costs them no money, because someone else is making it for free, and booting it off for no reason.”

While Streatham Rovers have caught out credulous Tories and complacent television researchers, they are not the only targets of the account’s humour. Born out of Trevor’s own experiences as a non-league football fan, he admits that it is also “self-satirising”. The Greyhound ultras are “an affectionate piss-take of left-wing fan groups”, an exaggerated blend of anti-populist ideology, casual vandalism and spontaneous violence. The Streatham Rovers account is sporadically hijacked by a protest group called Enya Fans 4 Communism, whose niche political message was at one point retweeted onto Rory Stewart’s timeline. Trevor admits that the imaginary group “are a bit like protests and actions that I’ve been involved in.”

JOIN US ON SATURDAY AS WE PROTEST THE CLUB’S APPALLING HUMAN RIGHTS RECORD. WE ESTIMATE 12 PEOPLE HAVE DIED OVER THE LAST 42 MONTHS AT GAMES INVOLVING STREATHAM ROVERS. pic.twitter.com/Y0Cqso8vwL

For the moment, while the Twitter account remains, Streatham Rovers have migrated to Instagram, Facebook and a club mailing list, while shirt sales and merch underpin the whole enterprise. Some have suggested that Trevor should reverse engineer a club from the Twitter account, though he’s not convinced. “I think that would be one sure-fire way to kill the fun,” he says. “There’s a lot of bureaucracy, even in the lower levels of football.”

Were Streatham Rovers to be removed from Twitter permanently, the club would be sorely missed. Alex Crane, who has played for the supporters’ team, explains what gives the club its strange appeal. “I think the attention to detail, however spurious it may seem at times, has helped to fuel a desire for people to want to believe and to want more. Twitter is such a vacuum of hate-filled rubbish sometimes that accounts like Streatham Rovers provide welcome relief and, as part of the TBEU empire, it forms perhaps one of the most innovative uses of the site.”

With subversive humour so often dependent on irony and double meaning, on things not being quite as they seem, the powers that be at Twitter should be able to tell the difference between a fond piss-take and genuine disinformation. When so much harmful material escapes their notice, it’s hard not to question their motives. Whatever happens, the Greyhounds will #NeverStopNotGivingUp. Meanwhile, if Twitter really doesn’t have room for an institution like Streatham Rovers, it can only become that little bit more obsolete.

Linkedin
RELATED ARTICLES
OTHER ARTICLES
The situation in Afghanistan remains dire, with many groups facing persecution at the hands of the Taliban.
With their latest capsule collection, SCRT have constructed their own mythology, based on the story of a fictional meteor shower that hit a small Scottish town.
Photographer Phyllis Christopher recalls capturing sex and protest at a time when the city had become a haven for the queer community.
Following the release of his newly republished 1991 book, Redheads, the American photographer reflects on his celebration of ginger people and their magnetic power.
Over the weekend, London locals came together to resist a pre-planned police raid targeting delivery drivers.
After news broke last week around an expected reversal of the 1973 landmark law that made abortion legal in the US, protestors gathered in the UK in support of American women.