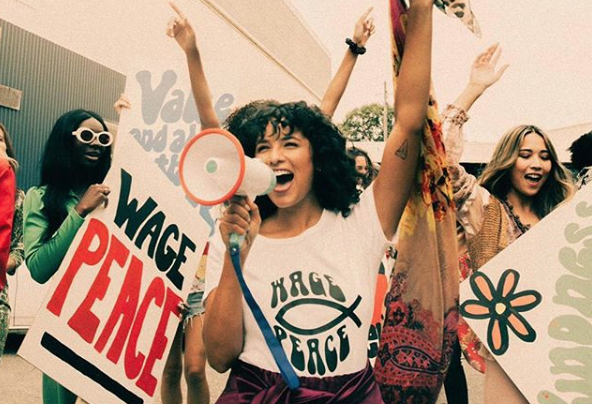 At a time when fewer young people are religious than ever before, we talk to millennial worshippers about what draws them to church, and whether faith and progressiveness are mutually exclusive.

At a time when fewer young people are religious than ever before, we talk to millennial worshippers about what draws them to church, and whether faith and progressiveness are mutually exclusive.

Christianity has long adopted the medium of the moment. It has mastered the printing press, TV, and multiple genres of inspirational music. Now, a cohort of churches has set its sights on social media. Granted, you might not have noticed: their aesthetic is so tuned into the visual zeitgeist that it’s hard to distinguish from the rest of your timeline.

Celebrity-endorsed mega-church Hillsong, with offshoots in London, Paris, LA and beyond, is one of these organisations. It shares everything online, from inspirational quotes on millennial pink backdrops, to event invitations for a “Good Friday Redemption Fashion Show”. Its global women’s conference, “Colour,” evokes a sort of Christian Coachella, advocating for “sisterhood”, “justice” and “change” in a font that could be directly lifted from Taylor Swift’s Reputation album cover.

Essentially, it’s a church that’s acting like a brand. “Lego was around for our parents and grandparents, I had Legoland and now kids have The Lego Movie,” says Hillsong pastor and UK creative director Dan Blythe. “They’ve innovated to remain relevant and that’s what we try to do.”

Smaller churches, too, are taking a page from the millennial marketing handbook. XØ Young Adults, a community for 17 to 30-year-olds in Australia’s Suncoast Church, invites followers to a Tropical Fiesta (complete with Tiki bar!) via a website that includes a neon sign, palm trees, a flamingo and a golden pineapple.

All of this is to say: we are not your nan’s church. And the message is hitting home. KXC’s largely millennial congregation has jumped from 40 to more than 500 since it opened in 2010. Hillsong, which started out with 30 people meeting in a school in Sydney now spans 23 nations and sees 130,000 people attending its weekly services – 14,000 of which are in the UK. 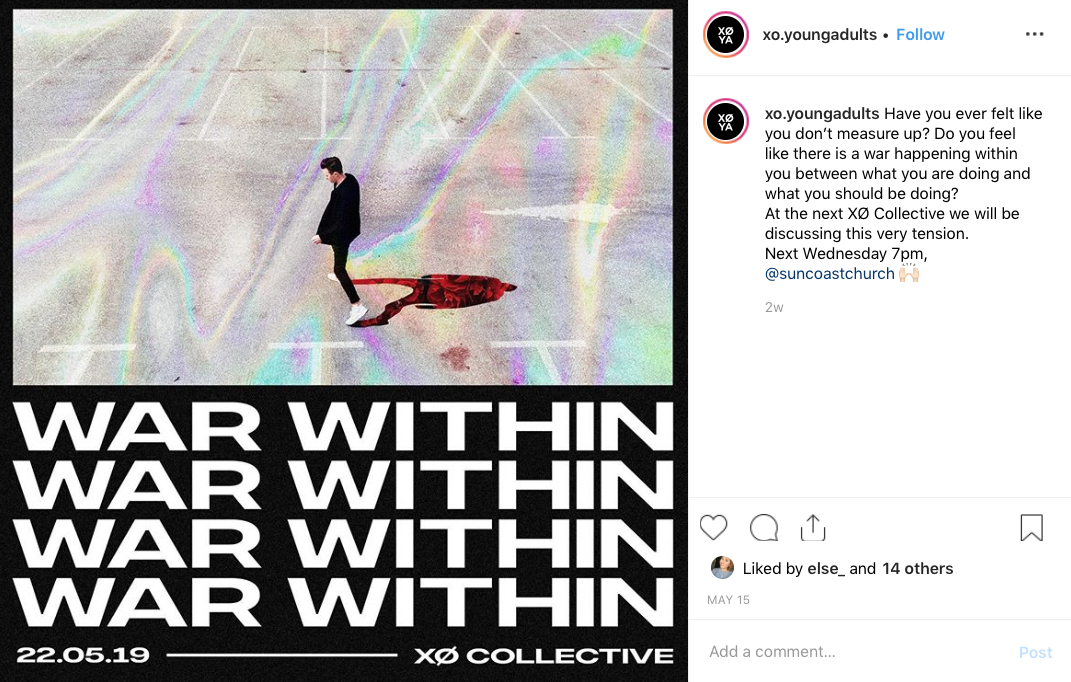 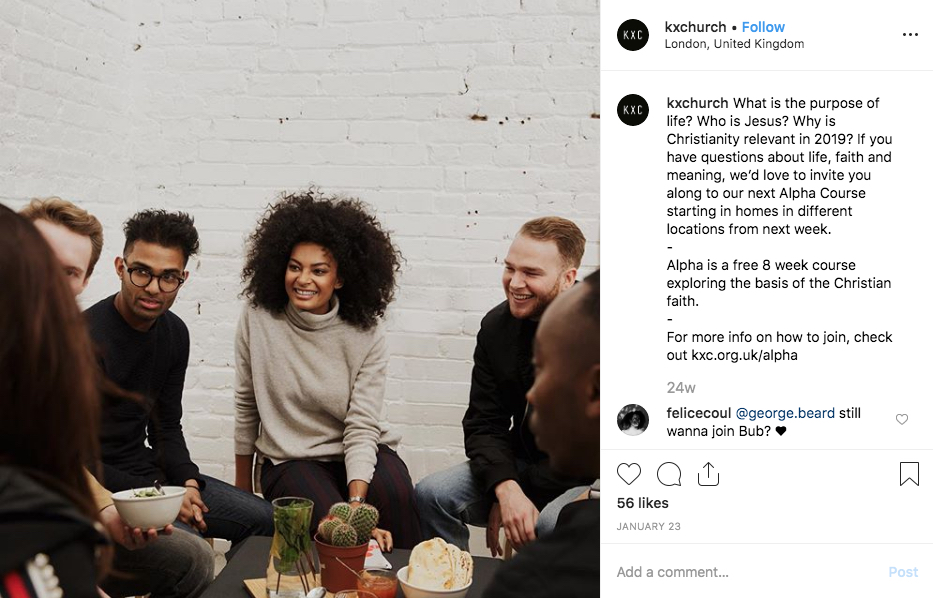 At the same time, unprecedented numbers of young people have turned away from Christianity and institutional religion. In last year’s British Social Attitudes Survey, 70 per cent of 18 to 24-year-olds say they have no religion. That’s up from 56 per cent in 2002.

“Young people are rejecting patriarchal institutions and sexual ethics that aren’t open to all forms of sexual or gender expression,” explains Linda Woodhead, a professor of Theology and Religious Studies at Lancaster University. “They don’t want authority figures telling them what to believe, how to feel or behave. Big Christian churches are particularly bad at all those things.”

So are these churches – as their carefully curated social media image seems to imply – succeeding by offering a more open and inclusive version of Christianity?

Beyond swapping ancient hymns for praise and worship music (rousing pop songs that sound like Coldplay’s “Fix You”), most of these churches are evangelical and emphasise a personal connection to God. It’s a more palatable approach to Christianity for a generation hell bent on self-determination, and maps onto a wider shift among young people, who now see religious identity as elective, rather than something you are born into.

“These days, even if you were raised religiously, you have to own it,” says Woodhead. “There’s none of this casual: ‘I’m Church of England but I never go’ which used to be common. Young people have to make it part of their identity.”

Lois Wright is one of those people. She grew up going to an African church in South London – one of the few Christian communities that is #thriving. Now, at 25, she attends Hillsong’s service in New Bermondsey every Sunday. “When I was younger I went because I had to,” she says. “We were taught to fear God and respect him but we weren’t taught to love him. That’s the difference between being brought up in a religious family and actually coming to the faith yourself.” 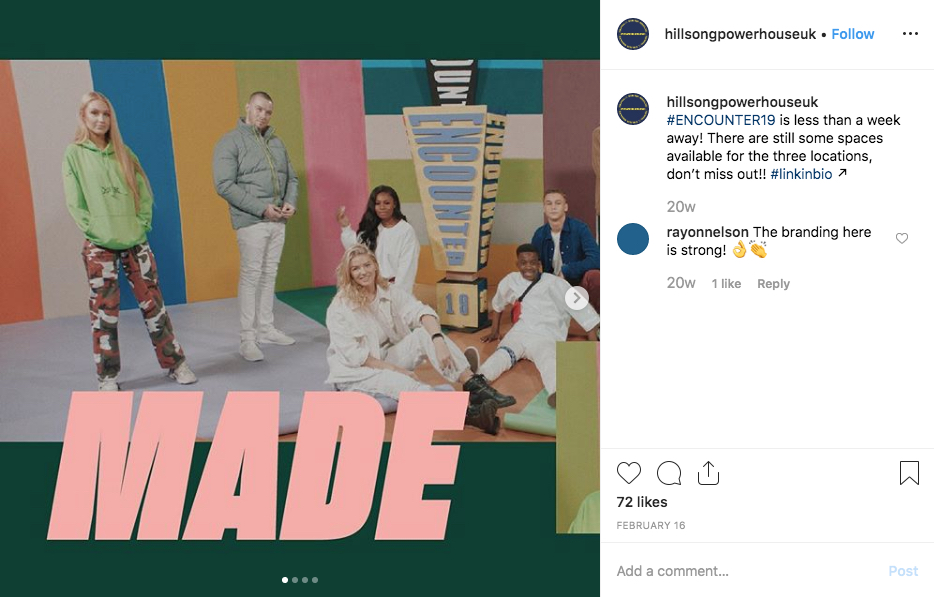 For Lois, that transition happened when she was 17. She was at her lowest point, post-two miscarriages and an abortion. “That’s when I came to realise God’s love – and you can’t be taught that. I came to see Christianity not as set of rules but as a kind of freedom.”

In some ways, KXC’s associate leader Pete James explains, Christian values can even be progressive. “Where there is an increasingly individualistic culture in society at large, we believe in community,” he says. “We offer a different story around what success looks like, how we might use our money. Jesus and Christianity is about what you can give to others.”

This is what drove Elisabeth Martens to convert. She was born and raised an atheist in Berlin, seeing Christians as gullible, “weird religious geeks”. Then, working as an au pair in Australia, where her host family attended Suncoast Church, she was drawn in by a world view she saw as radically different from the norm.

“I work at a huge company where profit and efficiency is everything,” she says. “All that matters is climbing the ladder. You connect with people because you’re trying to get somewhere and expect something in return. But Christianity is the opposite. To me, it means being kind to each other. It’s what motivates me to be a better person.”

Since retuning to Berlin, Elisabeth has been auditioning different churches – including Hillsong – to find one that reflects her values. “I don’t agree with celibacy,” she says. “As far as I know it’s not written in the bible, it’s just made up and I believe it’s the reason for so much sexual abuse in the Catholic church.”

Sadly, Hillsong is not exempt from similar scandals. Last year, it was revealed that founder Brian Houston failed to report nine child sexual abuse cases perpetuated by his father and fellow pastor Frank in the 1960s and ’70s. 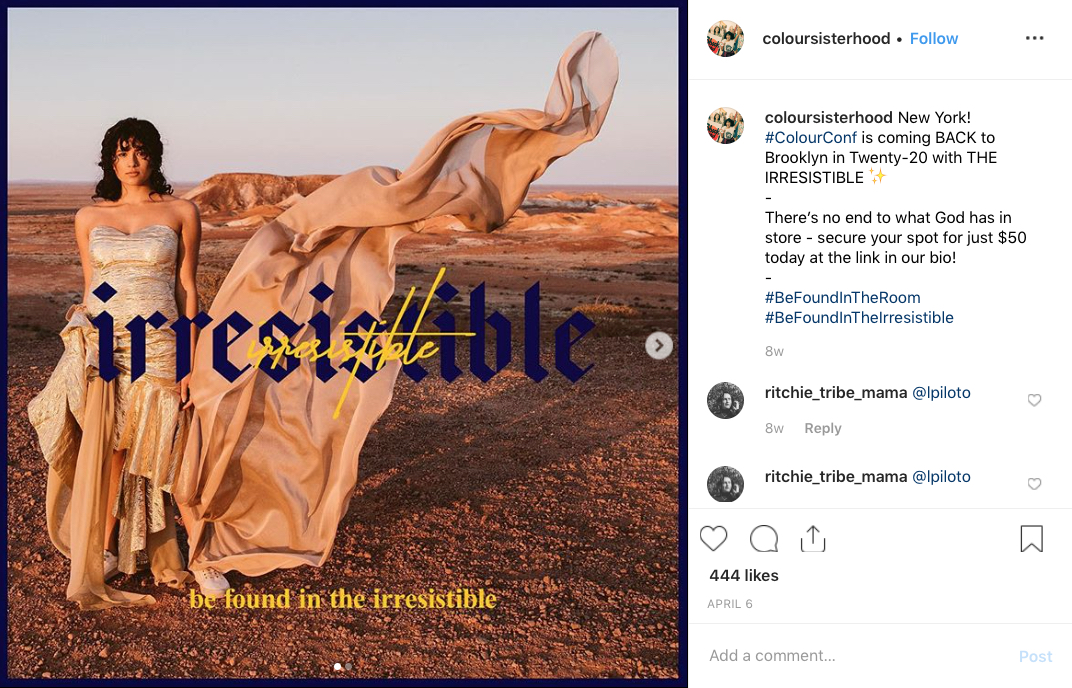 But even in the face of man-made institutions’ fallibility, Elisabeth is certain she’ll find a church that’s right for her. “Everyone should have a choice,” she says, “I think people who are gay are born that way and should have the right to live that out. The same goes with abortion.”

As a passionate feminist, Lois was also looking for a church that shared her views. “We have Colour Sisterhood gatherings, talking about how to deal with misogyny and help other women,” she says. “No one here thinks that because you’re a woman you can’t be a leader – this ain’t the Catholic church!”

While historically, churches were often ghettoised by race or nationality, places such as Hillsong are attempting to reflect the globalised sensibilities of a millennial generation.  After being brought up in an African church, this was especially important to Lois: “When you’re surrounded by a group of people with the same opinions and prejudices, your perception of things gets skewed. It used to baffle me when I was younger when I met a white Christian because all the Christians around me were black. But at Hillsong, there are people from everywhere in the world.”

KXC is currently “going on a journey towards increased diversity”. As pastor Pete James explains: “Two years ago we formed a group with people from different ethnic backgrounds. They have helped us see our blind spots and to reconsider certain words or songs we use. Being a white, middle-class church is certainly not an aspiration. The fact is: all are welcome.”

The issue with casting as wide a net as possible, is that invariably someone will fall through the cracks. And, as is so often the case, one of the factions left by the wayside is the LGBTQ+ community.

“Evangelical preachers are very heteronormative, speaking about their marriage and children,” explains Philip Baldwin, a gay rights activist and devout Christian. “As a straight member of the congregation you might be completely unaware of these nuances, but if you’re an LGBTQ worshipper, the silence around issues of sexuality is deafening.” 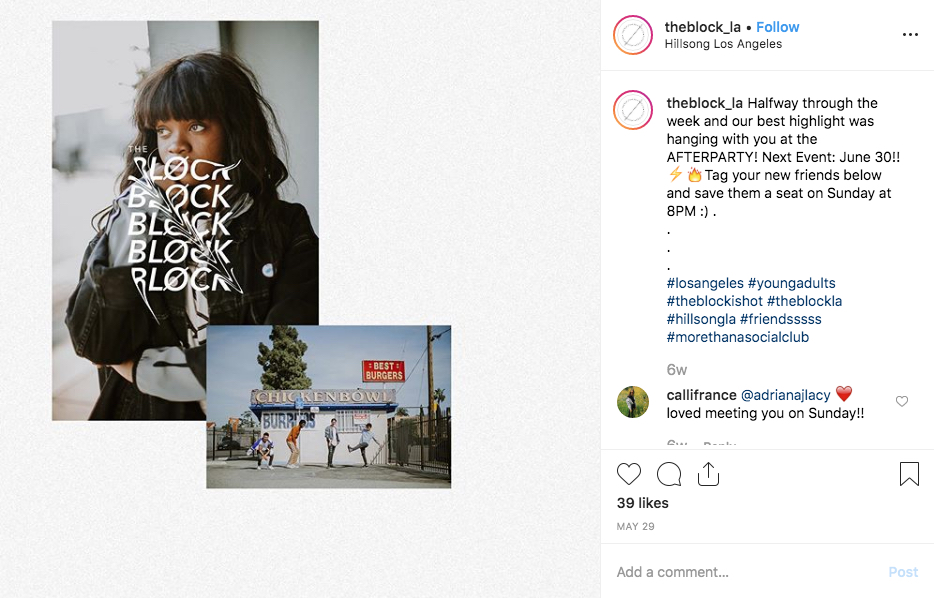 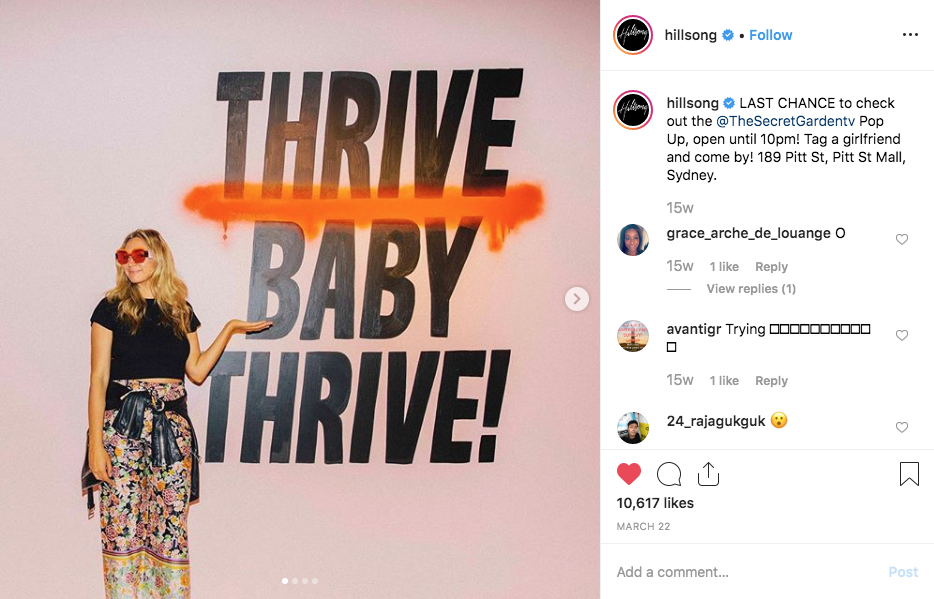 Pete James of KXC admits that, although there are people from the LGBTQ community within his congregation, he cannot say definitively that the church supports gay marriage: “I really believe in a church that brings together people from all different viewpoints so I navigate a lot of sensitive things within our congregation.”

Things look similar at Hillsong. In 2015, senior pastor Brian Houston released a statement explaining that, although gay people are welcome to worship at his church, “God’s word is clear that marriage is between a man and a woman” and that “we do not knowingly have actively gay people in positions of leadership”. This was in response to the news that Hillsong NYC’s choir director was being forced to step down after it became public that he was gay.

This kind of mixed messaging can be harmful for young LGBTQ people, Philip explains: “A quarter of young homeless people are LGBTQ. That’s what happens when you reveal your sexuality to a family with a strong faith background. It would make a massive difference if influential leaders in places like Hillsong or Holy Trinity Brompton actively spoke out in support of LGBTQ rights.”

And so these churches (as many brands before them) co-opt the aesthetics of the young – the visual language of progress and inclusivity on social media – without always backing it up with meaningful change. To bring more people into the faith, they’ve attempt to please everyone through a catch-all version of Christianity, which makes it impossible to take a definitive stand on polarising issues.

Despite all of this, Philip remains optimistic. “Christianity for me is all about equality, acceptance, respect for the individual, charity, empathy and I believe that Jesus would have been at the front of every pride or human rights march. We need to change the institution from within. And I think it’s a battle we can win.”

Linkedin
RELATED ARTICLES
OTHER ARTICLES
Photographer Bruce Gilden discusses his series documenting the overlooked factory workers, labourers and other people residing on the margins of English society.
50 years since its inception, and the campaign calling for recognition that capitalism depends on domestic labour is as pertinent as ever.
Photographer Matthew Brookes recalls following a group of young people in Venice Beach living in search of the perfect wave.
Yesterday queer activist group Lesbians and Gays support the Migrants staged a die-in at the Pride in London parade to protest the inclusion of police in the march reports Huck politics editor Ben Smoke.
For decades, an area of East London has served as a community hub for Vietnamese people looking for a taste of home.
In the latest instalment of Photographers in Conversation, the chronicler of raves, protests and beyond explains why he’s drawn to such specifically visceral environments.