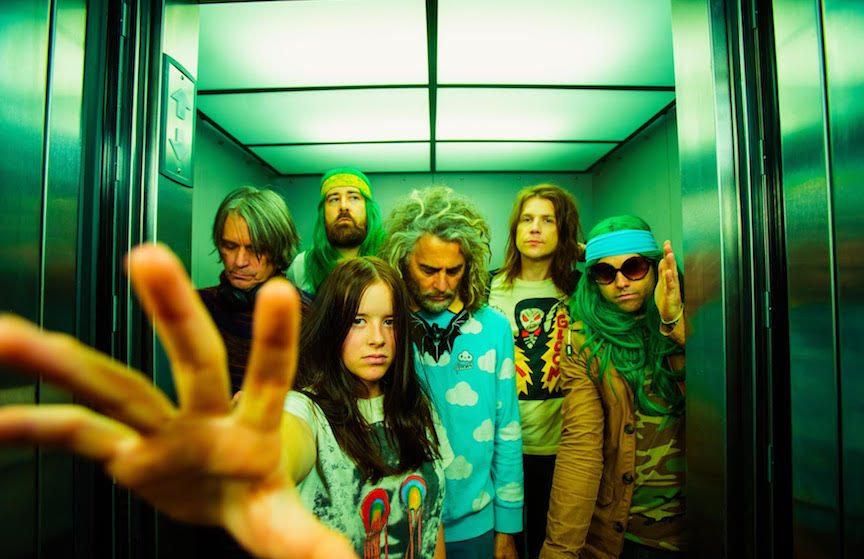 The teenager reflects on the remarkable turn of events that led her to record an album remotely with the iconic rock bad during the pandemic.

The teenager reflects on the remarkable turn of events that led her to record an album remotely with the iconic rock bad during the pandemic.

Nell Smith could never have known how important picking out a parrot costume would turn out to be. As the 14-year-old prepared to go to see The Flaming Lips, one of her favourite bands, play in Calgary, she’d just wanted to be part of the regular explosion of colour and mayhem that the Oklahoma band bring to every performance.

This wasn’t Nell’s first time watching The Flaming Lips: she had been attending their shows with her parents regularly since the age of ten and had worn this particular parrot costume once or twice before. Usually, she’d find her way down to the front row and sing every word. As the band’s frontman Wayne Coyne took to the stage for the soundcheck this particular night, however, the girl in the parrot costume happened to catch his eye.

“He came over to us and said, ‘I recognise you because of your costume!’” Nell recalls. “I couldn’t believe it.” Evidently, Nell’s exuberance left an impression on Coyne. After a brief chat, she wrote him a letter and was surprised to receive a swift reply along with a phone number and note requesting that they stay in touch. “He just gave us his number!” says Nell. “We thought it would be one of his agents’ numbers or something, but it was his actual phone number.”

It was the start of an extraordinary string of events that now culminates in Where the Viaduct Looms – a full-blown collaborative album between the two parties, out now on Bella Union. The record features nine covers of Nick Cave songs sung by Nell and backed by the band’s elegant, understated arrangements.

The teenager’s delicate, mysterious vocal performances demonstrate a knack for storytelling that far belies her years – let alone her experience level. One person who happens to agree is Cave himself, who wrote on his site: “Nell shows a remarkable understanding of [Girl in Amber], a sense of dispassion that is both beautiful and chilling. I just love it.”

Even more remarkable, then, that at the time of her first interaction with Coyne, she had only very recently begun playing guitar and writing her first songs. Through their correspondences, Coyne learned of Nell’s own musical creativity and encouraged her to send over a handful of Flaming Lips covers, including ‘Yoshimi Battles the Pink Robots’ and ‘She Don’t Use Jelly’, as a trial run for a possible project together. “He said he loved my voice,” Nell remembers, and before long, plans were drawn up for her to spend studio time with the band.

“If I sit down and think about it, it’s definitely mad,” Nell now admits. “It’s just confusing. I feel like I’ve got sort of used to it, but when I stand back and try to take it all in, it’s like, ‘OK… what?’”

If this is all a little strange for her, then one can only imagine how surreal the experience is for Nell’s father, Jude. A fan of The Flaming Lips since his teenage years, he has been playing his daughter the band’s music on road trips from early on in her life, with Nell naming ‘The Soft Bulletin’ as one of her earliest memories. By the time Nell moved with her parents to Canada at the age of five from her native Leeds, she could already have been considered a Lips fan – thanks to her dad’s encouragement.

“My dad can’t wrap his head around it, he’s definitely mind-blown,” she says. “He gets excited to be hanging out with Wayne. I feel like it’s easier for me to understand as a younger person and to deal with it.”

The original plan for Nell to travel to the Lips’ home studio in Oklahoma City to record a set of her original compositions was scuppered by Covid. Both sides were determined not to let the moment pass entirely, though, and the final concept was eventually settled on last summer. “Wayne said, ‘I really like this song by this artist Nick Cave, it’s called ‘Into My Arms’, do you want to try it?’ So I learned it and recorded it and sent it with the raw vocal down to Wayne and a couple of weeks later, he sent it back and he had completely put a twist on it and it sounded so cool. It was like, ‘Woah, is that actually me singing? How did this happen?!’”

Nell admits that she’d never listened to any of Cave’s music before Coyne made the first suggestion, but they were soon going back and forth with song suggestions, with ‘The Ship Song’ in particular capturing Nell’s attention early on. “When I first listened to Nick Cave, it was definitely not the music that I would usually listen to,” she explains. “It was really deep and dark, but there were a few songs that stood out to me more than others.”

The Flaming Lips have previously delved through other artist’s songbooks before, including entire cover albums of The Dark Side of the Moon and Sgt. Pepper’s Lonely Hearts Club Band. But Coyne’s choice of Nick Cave as an artist to explore with her is particularly intriguing, with Nell bringing a set of experiences and perspectives that diverge wildly from the distinct authorial voice that Cave has been refining for the last four decades.

It is a dichotomy not lost on Nell herself. “I relate to some of his lyrics, I know lots of them are from life experiences where he can say stuff that I probably wouldn’t understand. But I can relate to a decent amount of his lyrics.”

Writing on his site The Red Hand Files, Cave noted that, “I was going to say Nell Smith inhabits the song, but that’s wrong, rather she vacates the song, in a way that I could never do.” It is true that her touch lends a degree of pathos and human vulnerability that these songs may previously have lacked, trading in Cave’s imposing towers of mortality and grief for a more reflective, oddly eerie effect.

Nell’s own musical preferences take in artists as diverse as Arcade Fire and M.I.A., alongside what she describes as the “normal pop stuff”, although she credits her dad for diversifying her taste to include “a bunch of cooler music”. If there was any danger of her developing a big head as a result of her exploits with one of alternative rock’s most beloved bands, then her classmates are on hand to bring her back down to earth, too. “In school, my friends are like, ‘Oh, who are they? We don’t know who they are!’ They’re not amazed by it because it’s not a huge thing to them.”

Nell managed to finally meet up again with the Lips recently to record a set of music videos, before joining them on a tour of the Midwest, where her contacts list got even starrier after getting the chance to meet Miley Cyrus – another former Wayne Coyne collaborator. Thoughts inevitably will now turn to the possibility of putting together live shows for Nell and The Flaming Lips, as they are credited on the album. “That’s definitely something that I want to do and I think Wayne wants to do it as well,” says Nell.

With the way things have been going for her, she can be forgiven for dreaming big. Who knows what could be next.

Where the Viaduct Looms is available on most major streaming platforms.

Linkedin
RELATED ARTICLES
OTHER ARTICLES
As she gears up for the release of her first book, the 24-year-old climate activist talks standing up to authority and building a more inclusive movement.
AI companies that develop image-generators using copyrighted artwork from the internet are coming under fire from artists who say that it amounts to theft.
Activists and campaigners are fighting back against new laws that would seriously undermine the ability to take industrial action, calling it an attack on fundamental workers' rights.
A new law change is enabling Britain’s donor-conceived children to know the truth about their origins – but campaigners say the fertility industry must do more to protect people.
Tristan O’Neill’s shots of dancers caught in moments of reverie at the height of rave’s golden age are a testament to the UK’s legendary club culture.
A recent High Court ruling against the right to wild camp in Dartmoor National Park sparked the largest land protest in history – and campaigners say their fight is not over yet.