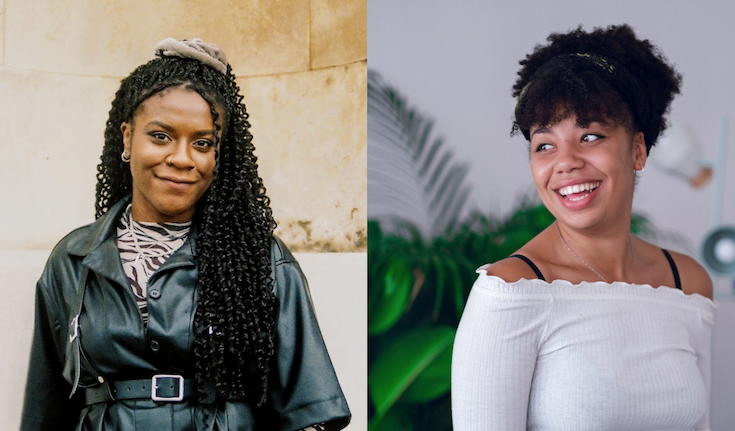 Charlie Brinkhurst-Cuff and Timi Sotire discuss their new book featuring 28 inspirational Black British voices on the experience of joy and what it means to them.

Speaking over Zoom, the writer-journalist duo and close friends are sat together round a dining room table in Charlie’s flat at the end of a busy week. “We’re going to bake a cake together,” Charlie says. “I called Timi around because I felt lonely.” The pair met through a call-out organised by Penguin for a co-editor and mentee to join Charlie in commissioning essays from younger writers, for which Timi was selected. “Initially, the co-editor role was going to be almost confined to commissioning and working on five essays,” explains Charlie. “But it’s evolved, and Timi has gotten involved with so much of the project. So it’s been wonderful.”

Huck spoke to Charlie and Timi about putting the anthology together, the need for more representations of Black joy in the media and stanning One Direction.

How did the idea for the book come about?

CBC: So Black Joy kind of came about in summer 2020 after having a conversation with Penguin, and they had this broad idea for an anthology about Black people. For a lot of us, 2020 was a very difficult period of time, and there was a lot of fake solidarity. A lot of brands and companies, and even friends, were rushing around trying to ‘fix’ white supremacy. I wanted to make sure that if I was going to work on something that it was going to have meaning beyond that moment. I always try to make sure that everything I work on is purposeful and I think ‘joy’ as a purpose, that’s the dream, right?

When I was sitting around doing research right at the beginning – this was after we had the concept – I came across The Black Joy Project by Kleaver Cruz, and his work is brilliant. He interviewed over 1000 people in the African diaspora about what joy means, and he took some really beautiful photography. He essentially made the point that this conversation about joy’s potential will never be over, it’s ongoing. As Black people, we need to continue embodying it as praxis and adding to it with our own unique interpretations.

What was the commissioning process like and everything else in the lead up to finalising the anthology?

CBH: At the start, there was something like 40 essays that Penguin were thinking of commissioning but in the end, we landed on 28 for this book. So, I’d say we wanted a kind of a commitment – again, beyond that ‘moment’. I wanted there to be meaningful support and action behind getting Black people into the publishing world.

TM: I wanted to make sure that there were people included that hadn’t really been given the chance to do something like this, but that I knew had the talent, and who I was personally quite a big fan of. You’ll see quite a few familiar names in there but hopefully some new writers, as well. And it definitely skews young – with the exception of Auntie Diane.

Did you feel the need to leave anything out of the anthology in the early stages of commissioning?

TS: One thing that I noticed was that a lot of the contributors naturally skewed more towards talking about pain when we were putting together this anthology. And it was kind of a thing where me and Charlie would give them a nudge to be like: ‘It’s joy! The book’s about our joy!’ So that was definitely a very big learning experience, I think for myself and for the writers, just kind of trying to encourage everyone to focus on the celebration of Blackness.

CBC: I think it’s a really important point and it’s one that I’ve thought about a lot while editing, commissioning and working with people on this. I’m naturally quite a melancholic person, and both of us are in our feelings a lot. We have an essay on being intentional about your joy in the book by Lavinya Stennett, but that idea came up quite a lot in the editing process. You definitely have to be sensitive because you can’t tell someone that writing about their pain isn’t valid. Equally, it’s not about ignoring or passing over people’s pain, because that is as much a part of life as joy is.

I don’t know if either of you have memories of this, but growing up and seeing that TV set being rolled into the classroom on wheels and knowing it could be one of two things: a Christmas film or Roots…

TS: Oh my god, and being the only Black person and everyone’s looking at you!

CBC: That bit where Kizzy gets taken away? Breaks my heart man.

TS: No, I’ve actually blocked out Roots. I think as a kid I was so traumatised by it, I couldn’t. 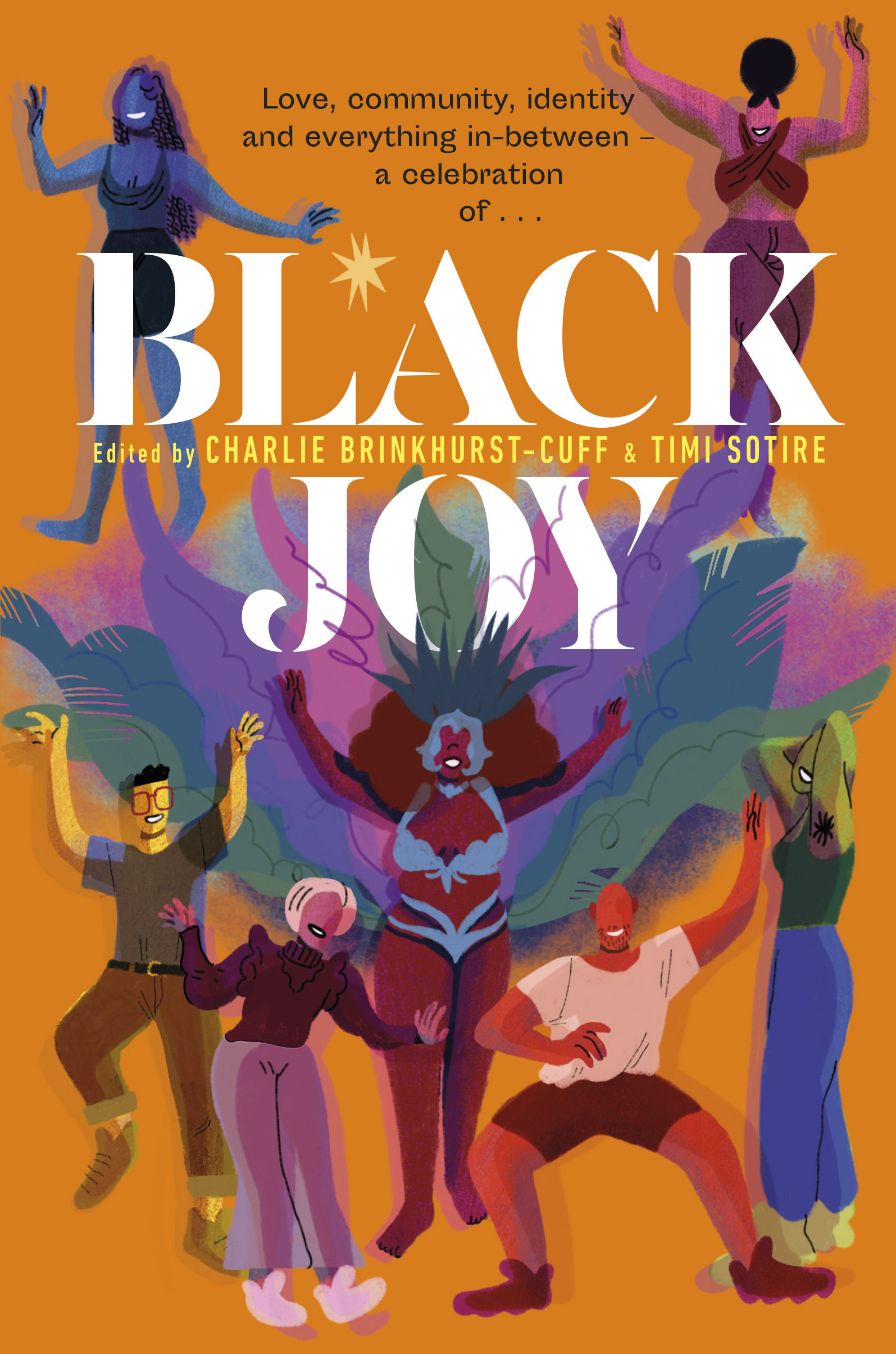 Earlier you touched on the response to George Floyd’s killing. I get the sense this anthology is less about providing an antidote to trauma, but rather about opening up a space for Black people to express themselves?

CBH: Of course, it’s about creating space for joy, which is important in its own right and something I feel we’re not asked to do very often as Black people. It’s such a sensitive topic, but there are some really interesting conversations happening around Black trauma and the kind of films, the literature and creative output around Black trauma at the moment. I used to think: ‘We don’t need any more songs about X-thing, because there’s already been this, this and this’. Whereas now, I have a more holistic take, which is that those stories are needed, and we can have this other thing, too. We’re expansive.

TS: Totally agree with Charlie. I see it not really as an antidote, but more of a balancing of the scales. I really don’t want people to think that we’re trying to solve racism, but I’m interested in trying to introduce something else, in trying to lift the collective spirit. I feel like we need that. Reading Munya [Chawawa]’s essay on workplace banter between co-workers, for example, and Travis [Alabanza]’s essay on Prince. It just makes you happy and makes you smile and that’s what I want people to get from this.

Timi – your chapter on ‘Stranger Communities’ was so interesting, you were fully invested in this world of stan culture! Why did you highlight your stanning of One Direction as being a source of joy?

TS: I wanted to write about something that brought me joy but also something we wouldn’t necessarily think of as constituting Black joy. There are obvious things we think about when it comes to that. You’ve got Black music, food and all the other things that are addressed in the anthology.

Growing up, I did feel a bit insecure about my Blackness, I felt that I wasn’t Black ‘enough’ because the things I loved weren’t seen as ‘Black things’. So, when I was thinking about things to write about, I was crossing loads of ideas off, thinking: ‘No, you can’t write about that,’ but I had to shift my perspective. If I find joy in this, as a Black person, then it matters.

It was such a big part of my teenage years but it’s not something I speak about often because I didn’t want people to think I was weird, and I didn’t know many Black girls that were interested in [One Direction]. But interestingly enough, since writing and talking about it, I’ve had a lot of other Black people reach out to me who were in fandoms or fandom-adjacent communities, whether it be B2k, The Wanted, Little Mix, The Spice Girls. I’m glad that I wrote it now because I think it is something people don’t consider when they try to conceptualise Blackness, but this proves it can be, and is, a big part of all of our lives.

CBC: I was never in a fandom myself, but I was in my own weird spaces online. You guys are a bit younger than me, but back in the day I was heavy on Bebo. And at the time, I set up this weird atheist Bebo group.

TS: I did not know this.

CBC: It had a lot of followers! [Laughs] So that was my ‘thing’ I guess. That’s what drew me to Timi’s piece – aside from it being beautifully written. I feel as though a lot of people can relate to the idea of being in a stranger community: that notion of being in a crowd and still feeling held, it’s really special.

VM: You definitely get a real sense of everyone’s inner child in this book, how are you nurturing yours?

CBC: I think I can say for both of us, when we were younger, it wasn’t necessarily journalism that we were interested in, it was fiction writing. And so, although the pandemic has been awful in many ways, having that space to dedicate to exploring creative writing has been really lovely.

TS: My younger self was very confident and I’m doing a lot of things to come back to her right now, like doing the things that made me scared as a teenager. A lot of that insecurity was tied to my race and sexuality. When I wrote my chapter on ‘Stranger Communities’, I was having therapy. It’s a thing called ‘schema therapy’ which is about your inner child and having a healthy relationship to it. So that’s probably why it came up in my essay.

I feel as though we come into the world loving ourselves and the world tries to like mould you into something and bring you down a peg, especially as a Black person, we feel that a lot. You spend your adult years almost ripping off this mould and trying to come back to the self that you were when you first came into the world.

Being open about my love of One Direction was a part of the process. I’m officially out as well, which is another step! But generally, just getting back into certain genres of music, TV shows and reading again. When it came to this book, I was nervous about my style of writing because I’d tucked away that part of myself that wanted to be Jaqueline Wilson when I went away to university. Seeing my name on the back of this book is like, ‘Wow.’ I’m letting my younger self sit with that.

Linkedin
RELATED ARTICLES
OTHER ARTICLES
After building his reputation covering the US civil rights movement in the 1960s, the photographer went on to produce some of the most enduring images of the past century.
A new film from Berghaus traces the story of Adam Raja, who left behind a turbulent upbringing to discover the healing power of climbing.
A new podcast is opening up the conversation between trans women and trans amorous men in the hope of building coalitions.
From snake handlers to mardi-gras revellers, Tom “TBow” Bowden’s photos provide a snapshot of the wonderful and weird people who make up America.
After fleeing the war in Ukraine, people are finding it impossible to secure affordable and decent housing in the UK.
Zsófia Sivák’s ongoing project documents the country’s tavern culture, preserving a once defining part of rural life.