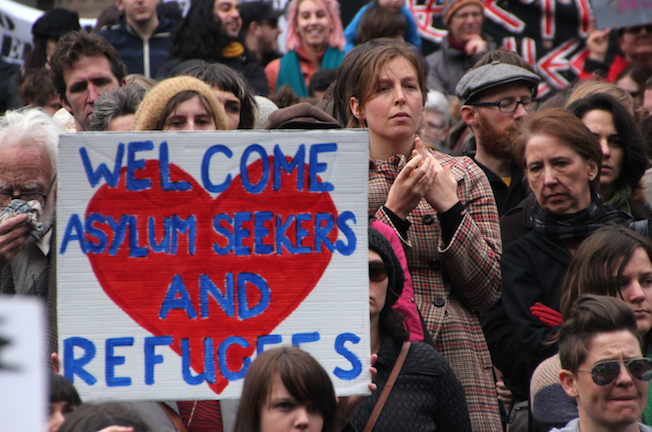 A Home Office error over a new chard changeover has left thousands of asylum seekers penniless, as well as placing huge strain on migrant charities forced to step in where the Government has failed to.

A Home Office error over a new card changeover has left thousands of asylum seekers penniless, as well as placing a huge strain on migrant charities forced to step in where the Government has failed to.

In 2011, Syria was just on the brink of a war that would descend with stunning velocity. What started as peaceful protests against the Syrian government expanded to civil war and an international crisis.

President Assad launched some of the first assaults – sending in 250 tanks in one day, cutting the city off, arresting, torturing and systematically killing people in their own homes – on Nabil’s* hometown of Deir Ez-Zor. Nabil, who is 33, along with 5.6 million others – nearly a quarter of Syria’s prewar population – fled abroad.

After a harrowing 18-month journey from Saudi Arabia, Nabil finally ended up in the UK ten months ago, where he hoped to be met with safety and food on his plate. But for the last 22 days, Nabil has been left with nothing. Thousands of asylum seekers have been unable to afford food or any provisions after their financial support from the Home Office was cut off.

Asylum seekers get a paltry £39.63 a week on a type of debit card called an ‘Aspen card’. These were governed by a private company called Sodexo, until a new contract was taken over on May 21 2020 by Prepaid Financial Services (PFS), meaning all cards had to be replaced.

It was during this changeover period that cards were not turning up, could not be activated, had wrong names printed or had zero funds. And close to three weeks later, the situation has still not been resolved, nor have the Home Office publicly acknowledged what charities are now calling a crisis.

Around 61,000 asylum seekers receive Home Office financial support and more than 55,000 use Aspen cards. Asylum seekers are banned from working to supplement the Home Office money and they cannot open UK bank accounts so can only receive extra money from friends, family or charities as cash-in-hand. The botched rollout has left people penniless and hungry.

Charities have been firefighting the fall-out of this and stumping up the money to ensure everyone has some food.  “Although this situation is unique because it’s happened all at once, we have seen The Home Office failing time and time again. We are quite used to stepping in and having to rally the troops of volunteers,” says Imogen McIntosh, founder and director of Bristol-based humanitarian organisation, Aid Box Community (ABC).

Many are asking why this was allowed to happen. The government knew there would be a changeover period, so surely some technical issues were foreseen. A Home Office spokesperson said to Huck: “We have worked closely to develop customer services processes and plan for a number of eventualities.” It’s a statement at odds with reality.

Clare Moseley, the founder of charity Care4Calais, says that this situation was absolutely preventable. “The obvious answer would have been sending out letters to everybody saying that it was going to happen, or sending small payments in advance. That would have been the humane thing to do.”

Worryingly, PFS is one of five companies that the consumer group has provisionally found to be involved in engaging in cartel behaviour for public sector welfare payments. While Imogen can’t yet predict the monetary cost of this crisis, she says it has taken up hours of resources supplying food vouchers, keeping the free shop open (where they provide free essential living items), delivering food and emailing the Home Office.

One organisation that asked to remain anonymous has issued over £2,000 in hardship payments for families who have not received emergency vouchers. This is outside of their usual service and staff members had to push aside all their casework to prioritise people’s access to food.

It’s a problem many others have voiced concern over, too. Leyla Williams, deputy director of West London Welcome, says: “The Aspen card crisis has taken over my time and we’re going to have to work extra hours to make sure that other people get the extra support needed too.” Imogen says less time has now been spent on more sustainable staff, such as their wellbeing groups.

The charity Migrant Help, contracted by the Home Office to provide support to asylum seekers, has been inundated with phone calls from Aspen card users, “to the point of collapse”, says Tim Naor Hilton, CEO of Refugee Action. Tia Bush, a policy officer at Care4Calais is concerned about the congestion on the phone lines, “because if there are other issues like urgent safeguarding issues, it’s the same helpline”.

Some asylum seekers may live near charities, but others could be very isolated where the social infrastructure has not been set up to support migrant communities. In that situation, especially if you are new to an area, you have to lean on whoever you can. One couple with two children, who asked to remain anonymous, have neighbours on their street – who they have never met before – supporting their family. One neighbour provided them with food and another neighbour lent them £30.

Another anonymous asylum seeker walked to a bus station to get wifi (he had no credit on his phone) to send a WhatsApp message to a charity saying he hadn’t eaten in days and was hungry. He is new to the area, unaware of food banks and doesn’t know anyone.

While stories of community spirit and charity efforts are heartwarming, clearly, it is the responsibility of the Government – not ordinary people – to provide for asylum seekers. “It’s impossible for small charities like us to make sure that everybody is okay and fed,” says Leyla.

It is common for people to stay silent or wish to protect their identity, as many are concerned that speaking out will impact their asylum application, or because of feelings of shame. “We are used to working and having money to spend on ourselves. We don’t want to live on benefits,” says Nabil. “We hate to be reliant on other people’s support – it’s a common feeling among people from Syria, who are very generous.”

While Nabil yearns to see his family again, he says that he never wants them to come to the UK. “I hate to think about them being treated how I have. I have been humiliated. I wouldn’t even be surprised at this stage if I was sent back to Syria.”

Depression and anxiety are a common occurrence among the asylum seekers who have been affected by the Aspen card scandal, but sadly most don’t trust the British government to seek help. Naima* says through tears over the phone how she just wishes to “feel like a normal person”. Separated from her daughter in Kenya, Naima has been living in multiple hotels throughout the years. With no funds on her Aspen card, she has been unable to buy sanitary products, cream for her skin or supplementary nutritious food. The hotel provides the same chicken and rice meal, with no fruit or vegetables, every day. This has given her constipation and she is in agony daily. “It’s traumatising,” she says.

Immigration stats for the year ending March 2021 showed that asylum claims were down 24 per cent on the previous year, proving that any migration ‘crisis’ spoken about in the press is merely manufactured, right-wing scaremongering. The excuse for lack of resources with the Aspen card scandal cannot be deployed when numbers are down.

Clare emphasises it really is a tiny number of migrants in the UK – especially compared to our European counterparts. “Most of us are going to go through our lives without having met one of these people, ever. It’s crazy, there are the resources. So, there’s no reason for it. It’s a mismanagement of resources.”

Nabil still has no funds on his card, and his home country is in ruins – but his hopes for the future aren’t. There is a moment of light amid heavy discussions about this scandal, as he says the only thing keeping him going is his hope to be “One day, at Oxford, studying Biology”.

*Names have been changed to protect anonymity

Linkedin
RELATED ARTICLES
OTHER ARTICLES
Rhiannon Adam spent three months capturing an ageing society wracked by division, isolation, and the aftermath of scandal.
Sean Maung’s photos are a love letter to the Black and brown communities that make up New York.
A 37-year-old woman shares how her abortion led her to become a clinic worker, and the abuse she’s received in that role.
Following the announcement of an 80% hike in the energy price cap from 1st October, crowds gathered outside the offices of energy regulator Ofgem to protest and declare their intention to undertake a payment strike.
In his 2008 series, the photographer pictured himself as Angela Davis, Martin Luther King Jr., Malcolm X, and other prominent figures.
As the Scottish government announces a rent freeze, an activist with Living Rent who fought and won shares how they did it, and what must come next.