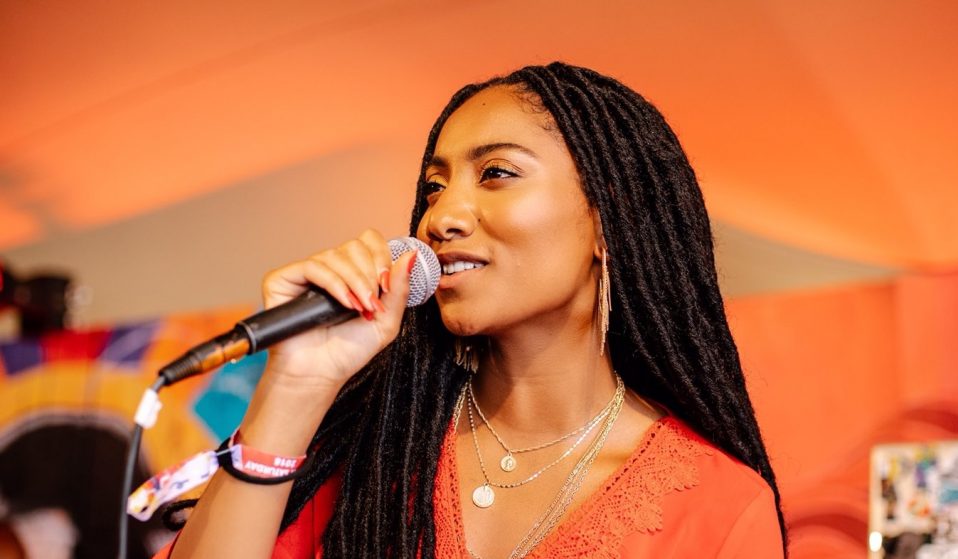 In the Black British poetry scene, a new generation of young voices are making sure their experiences are heard.

Lola Christina Alao explores the Black British poetry scene, looking at how a generation of young voices are making sure their experiences are heard.

In his poem ‘Gangland’, George the Poet retells and reimagines the story of his life as a young boy attending a grammar school far removed from the life he was accustomed to. ‘Gangland’ confronts the socio-economic issues that come with growing up in a social housing estate and navigating life as a young Black boy trying to make a name for himself.

“Every morning I left the ends for the suburbs with mansions where everyone was driving a Range,” George says. His words are delivered over dramatic classical music, the instruments work to complement the sounds of George’s words. He describes north west London as a “big place”, his “section” always the one with the problems, a vast expanse of city split into two worlds – the haves and the have nots, places where people were living their lives, and others where people were losing them.

“The gang movement came with very different energies and inevitably it came with enemies,” he writes. Killings linked to gang violence have doubled between 2017 and 2019 but it’s rare we hear from people who live it, next to it, around and inside it. Often, we hear about the realities of gang violence through clinical police reports and TV news briefings. To hear it through the lens of someone who experienced life in a deprived area gives vital voice and insight to a world normally forgotten.

Both George and Caleb Femi, a director and poet, dedicate poetry to areas they know and love. While George speaks on how the area he grew up in informed and shaped his aspirations, Caleb writes on the violence of gentrification.

In his poem ‘Coconut Oil’, Caleb combines spoken word and poetry, and explores the effect London gentrification has on its communities. “Ponytails of community buildings snipped away like it was infested with lice” Femi writes.

Across London, close-knit communities watch their homes and areas stripped away of all life and familiarity. They’re sliced away, their relative communal worth dismissed and discarded. For young Black Londoners gentrification is yet another spectre casting a shadow over their lives. In ‘Coconut Oil’ we get a rare insight into what that looks and feels like.

The first anniversary of #HaveYouHeardGeorgesPodcast is coming up and I’m feeling nostalgic, so over the next couple of days, we’re going to be recapping each episode. Vote #HYHGP to win this year’s #ListenersChoiceAward here: https://t.co/SL8MU7xgqz @britpodawards pic.twitter.com/EedHo9yrmU

To be Black in London often means gravitating towards people who look like you, to feel a sense of home and comfort. Things like Black British slang, foods from our native countries and music created for us and by us are all things that unite the diaspora.

It is through the medium of slang, present in much of George’s work, that Black Brits can relate to each other. The slang in George’s poetry, such as the lines – “I messed about / rejected their whole ideology / two middle fingers up / that was my philosophy / coz obviously I’m coming from the ends” – create an authenticity and warmth that things like news reports often miss the mark on.

In her ‘Celebrating Blackness’ piece, which was performed on BBC Newsnight, spoken word artist and storyteller Sophia Thakur effortlessly ties together different colloquialisms and dialects, such as the lines, “Etesen / Nagadef / Wargwun / What you saying?”, while reflecting on the beauty of our culture and its creations. Historically, the use of slang has been demonised and been referred to as “bad English” by ignorant people in positions of power.

But Black poets are now reimagining the poetry space through a different lens. Though stories of our trauma, activism and suffering are needed to remind Black people of what they have been through and overcome, expressions of Black positivity and joy are vital. It is important for Black people to bond over their love, hobbies and success.

‘Celebrating Blackness’ pushes boundaries in terms of the types of language we have become accustomed to hearing in poetry. “I hope that any Black person listening to the poem remembers that joy is a form of resistance. That they should never feel guilty about celebrating themselves and their culture,” Sophia tells me. “I hope that Black people are reminded of how essential their jubilation is to a balanced existence.” She adds that the poem was born out of “an abundance of negative press surrounding Blackness”.

“I saw it as essential to also lend a voice to celebrating Black stories, Black contribution and Black excellence,” she says. “It still prevails in our community, despite the mainstream desire to only show and aggressively highlight one side of the truth and story.”

‘Celebrating Blackness’ pays tributes to contemporaries such as Marcus Rashford and Melissa’s Wardrobe during Black History Month, which typically spotlights more traditional figures. It’s part of what makes the poem feel unique: “Oftentimes, the black figures we recognise attach blackness to slavery,” Thakur says. “Our story does not always need to be centred around oppression, despite it being a constant reality. Black people are doing incredible things beyond the scope of activism. In fashion, sports and climate change.”

Poetry is a powerful art form and can also be used as a way to understand our world – a sentiment that poet and playwright Eno Mfon echoes. “I love how poetry encourages you to get personal,” she explains to me. “It’s about you finding your own rhythm, your own pace, your own way of understanding the world before inviting others into yours.”

“It forces you to sit down with your thoughts and feelings, even if it’s uncomfortable. You learn how to listen to yourself and trust that your voice has power, even in a world that often silences Black women and tells us our feelings are invalid.”

Contemporary young Black poets are utilising the opportunity poetry provides to create and speak with a freedom they may not otherwise get in predominantly white spaces or other spaces they may not feel welcomed. Leighan Renaud, a Lecturer in English at the University of Bristol says that poetry is a necessary form of self-expression that has historically given Black people the “opportunity to explore the rhythms and timbres that best approximate their own experience.”

“It has given us the opportunity to express the beauty and the pain of our experiences – poetry is an opportunity for self-definition,” she continues. She references Edward Kamau Brathwaite’s essay ‘Nation Language’, which addresses how expression through poetry is necessary, while sometimes difficult, too. In the essay, he writes, “Pentameter remained, and it carries with it a certain kind of experience, which is not the experience of the hurricane. The hurricane does not roar in pentameter. And that’s the problem: how do you get a rhythm that approximates the natural experience, the environmental experience.”

“Our culture’s replaying across all of the globe
Whether it’s denied or unknown, we know what we hold
So I believe it should be told”

Poetry has always been a vital expression of emotion, trauma and lived experiences – particularly the Black experience. Poet and civil rights activist Audre Lorde used her poetry to address issues and injustices from racism, to sexism and homophobia. Maya Angelou celebrated the resilience of marginalised women, declaring: “I’m a woman / Phenomenally / Phenomenal woman / That’s me.”

This year, the global Black Lives matter movement saw the racism that Black people experience every day thrust centre stage. As loud and as powerful as the demos were, much of the national conversation was diluted down into news bulletins or endless statistics. But young poets of the now are breathing life into those experiences, painting a picture of what it means to be young and Black.

When the world seems disinterested, Black poets giving voice to those in society who have been violently silenced, ridiculed and shamed is powerful, is necessary and vital. Long may it continue.

Linkedin
RELATED ARTICLES
OTHER ARTICLES
Following the announcement of an 80% hike in the energy price cap from 1st October, crowds gathered outside the offices of energy regulator Ofgem to protest and declare their intention to undertake a payment strike.
The two-day long event returned to London this year, showcasing a spectacular parade, steel bands and Caribbean food.
A new project is documenting formerly incarcerated people as they transition back into civilian life.
By turning a real-life crisis into daytime television fodder, TV bosses have once again shown themselves to be completely out of touch with audiences.
Birdy Chu reflects on documenting the historic moment in which the territory was formally passed back from the UK to China.
Thousands attended the annual event this year to wheelie through the city and call for ‘knives down, bikes up’.