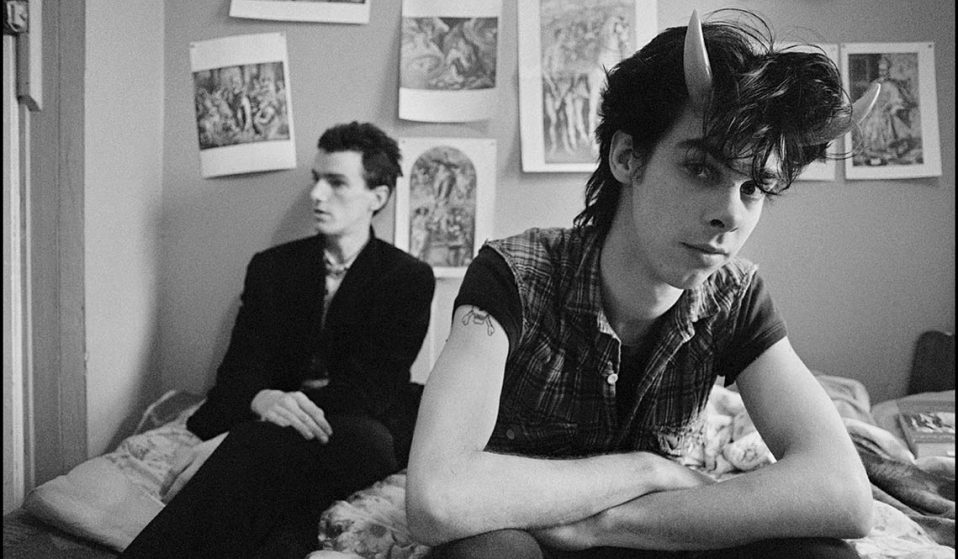 Photographer David Corio remembers shooting Nick Cave and his band, the Birthday Party, during their much-hated, turbulent period of living in London.

Photographer David Corio remembers shooting Nick Cave and his band, the Birthday Party, in the early 80s, during their much-hated, turbulent period of living in London.

When Nick Cave’s band the Birthday Party landed in London in 1980, they did so with a thud of bitter disappointment. The thriving UK music scene the NME had promised them when reading the magazine back home in Melbourne left them cold and bewildered. The feral post-punk outfit struggled to fit in and were living in squalor, with spiralling drug addiction an issue for some members.

The band’s ferocious live performances soon built them an avid and rabid following in their new home, but within a few years they had imploded, with Cave going on to form the Bad Seeds. During this turbulent period, photographer David Corio was assigned to photograph them, and a collection of his work has been collected in a limited edition book, Australian Gothic: The Birthday Party 1981/82.

“I was working for NME and they just said, ‘can you go and photograph this band’,” he recalls. “I’d never heard of them. I went to their address, which was a huge squat in Bayswater. It was this big old dilapidated house. I started taking pictures in Nick’s bedroom, which was covered in William Blake images that he’d torn out of a book.”

Initially, it was just Cave and bandmate Mick Harvey present and then Corio went to photograph the full band the next day. “I got on best with Nick,” he says. “He was more chatty and easy to deal with. He had a snide and sarcastic sense of humour – although they all did – and felt like the leader.” 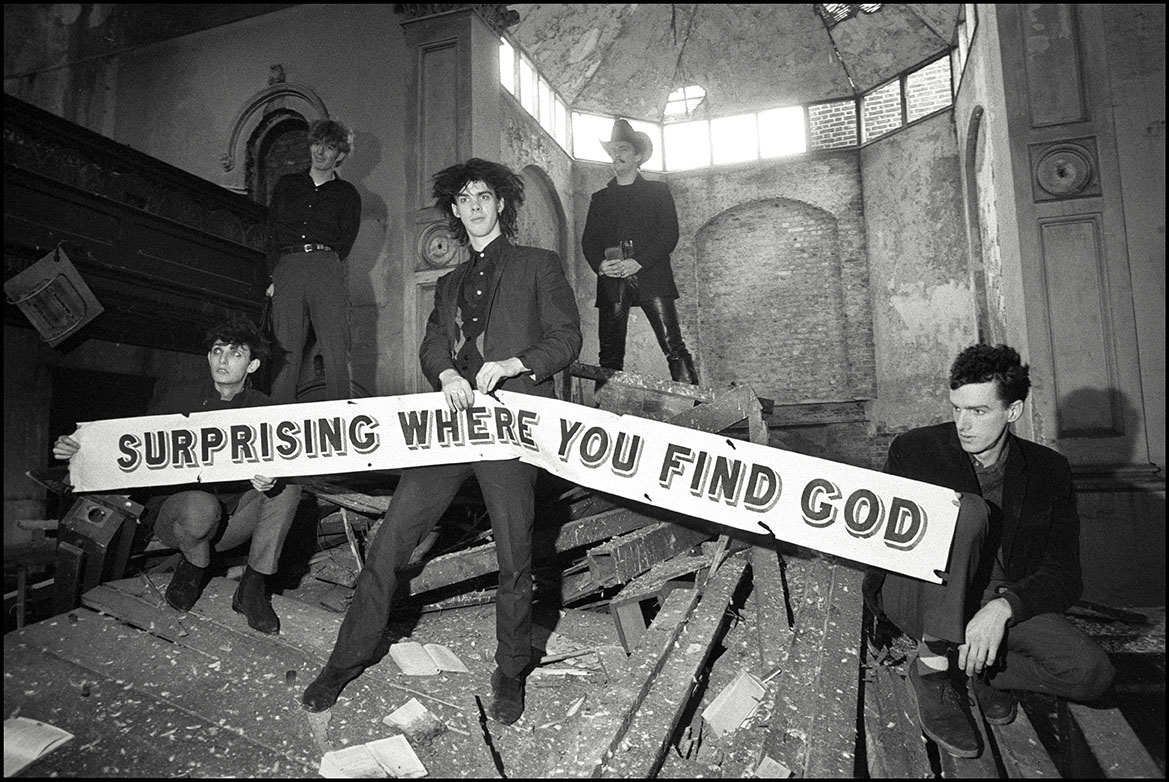 Nick Cave and the Birthday Party in a disused church in Kilburn, London on 22 October 1981

Corio was also able to pick up on some of the chaotic tension that throbbed at the heart of the band. “There was a lot of bickering going on,” he recalls. “This undercurrent of back-biting. But I guess that’s what made their music so good – there was a lot of tension in it. The energy felt very wired and there was a real buzz. It’s not surprising they didn’t last long as a band.”

After getting on well with the band, Corio was hired for publicity shots. “I like to ask people if they have any ideas and to welcome their input but with them it was always, ‘let’s do the pictures in the pub.’ They were all big drinkers so we did some in this Irish pub. They stood out amongst the clientele of old Irish blokes, with Nick’s big hair and Tracey Pew in his Stetson hat and leather trousers and Rowland Howard in his mascara.”

Another location was an abandoned Church in Kilburn. “There was pigeon shit all over the place and bibles and prayer books all over the floor,” Corio says. “Rowland set fire to one of the books. I can’t remember if it was a bible, but it would have been quite fitting if it was. He has quite a devious and sinister look in that picture – there was a real vibe about him, I barely spoke to him as he was the least approachable.” 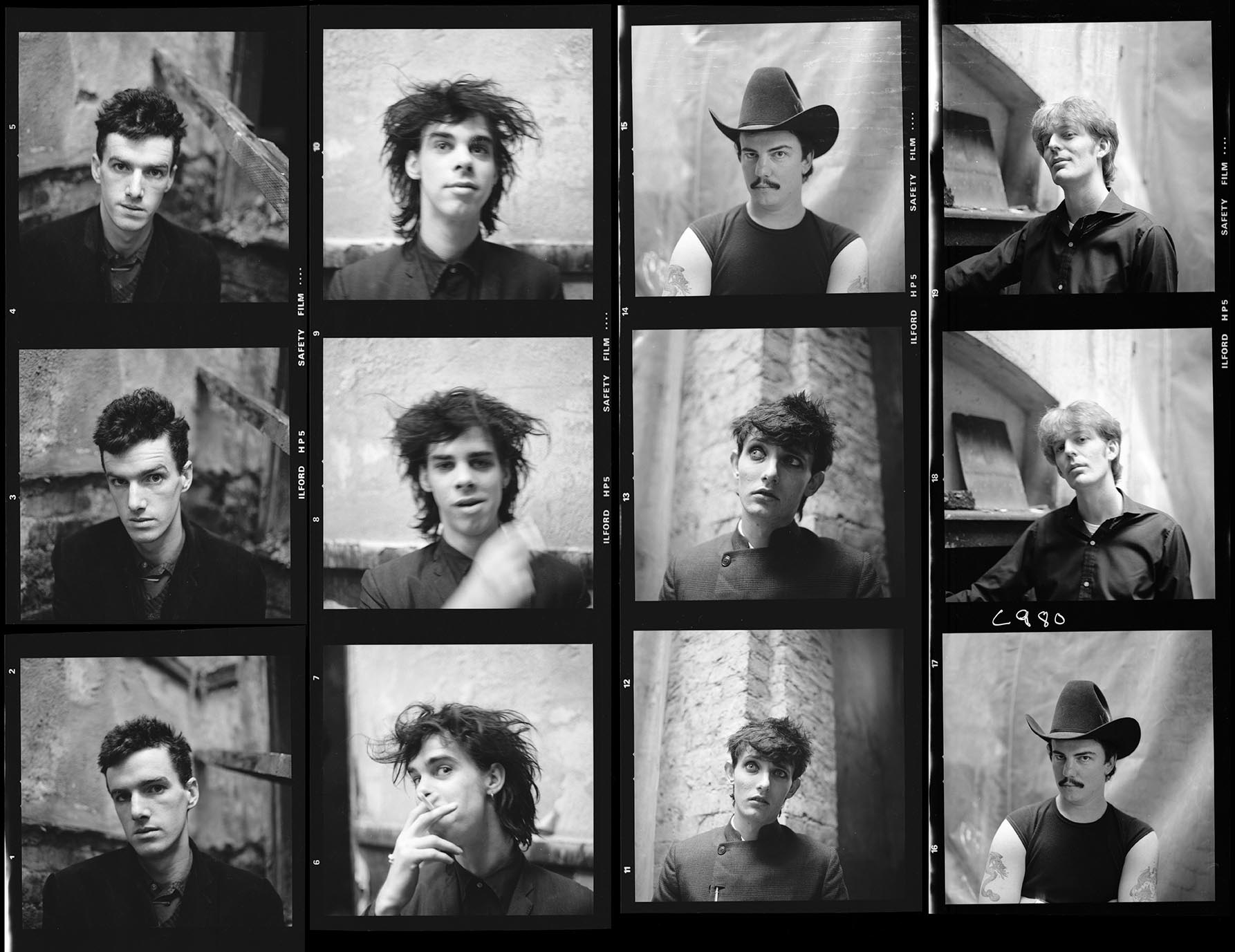 Contact sheet of Nick Cave and the Birthday Party in a disused church in Kilburn, London on 22 October 1981

Corio quickly learned that a traditional photoshoot set up wasn’t going to work with the Birthday Party. “You couldn’t structure a proper session with them,” he says. “They were quite a loose bunch; they weren’t people you could herd together to do poses. It was more just hanging out with them and getting what you could, trying to get them close enough together so they looked like a band.”

They weren’t always the most responsive of photographic subjects, either. “They were hard to motivate perhaps from booze or drugs,” he says. “Rowland certainly felt like he was quite a serious junkie at the time – not quite all there.”

“Nick was the most professional and he clearly knew that it paid off to donate some time to getting good images. He was well aware of his own image. The final shoot was just Nick and Tracey because the rest of the band didn’t show up. Then that was pretty much it, they went off to Berlin a few weeks after that shoot never to be seen again.” 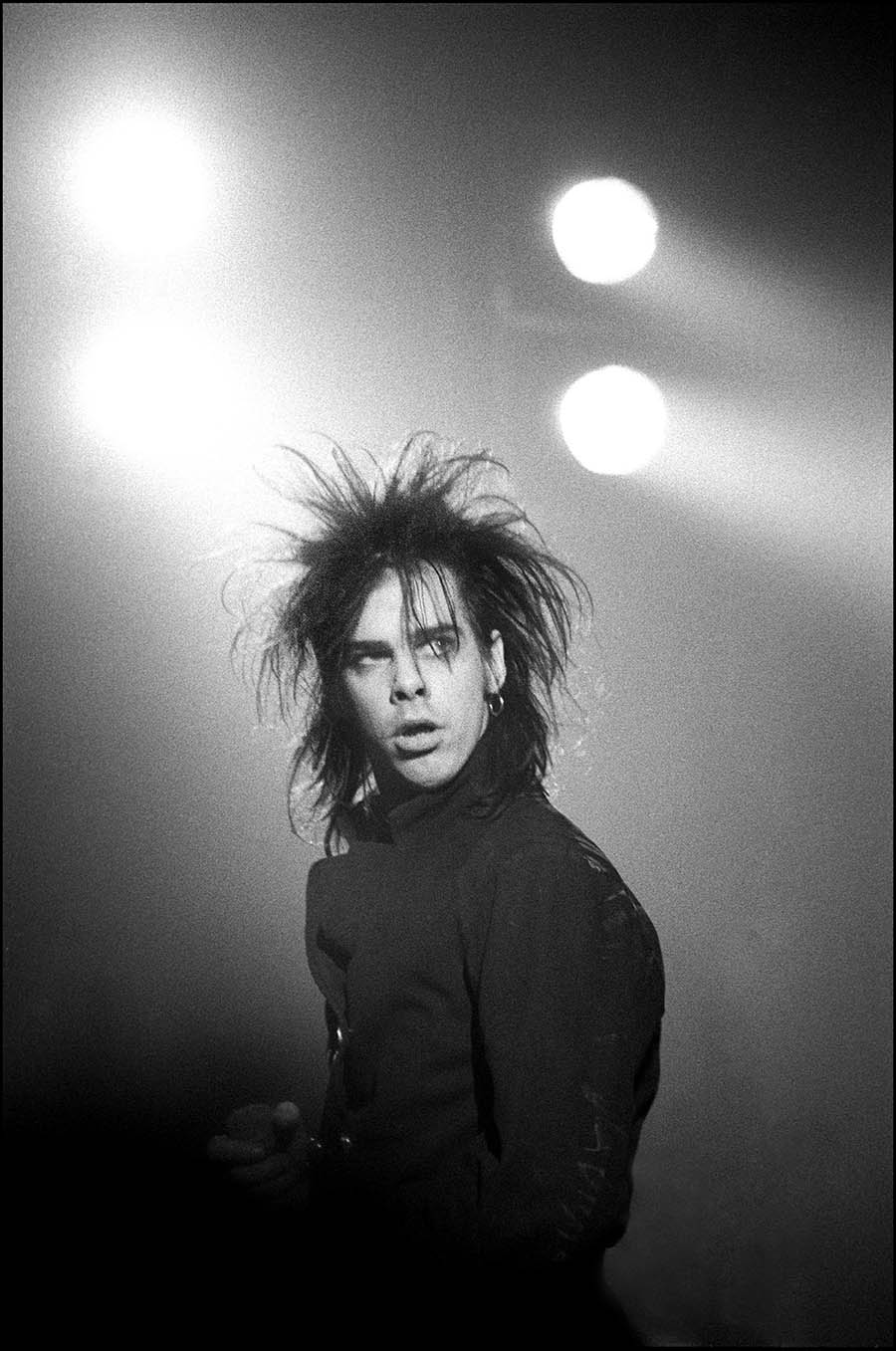 Nick Cave with the Birthday Party at The Ace, Brixton London 25 November 1982 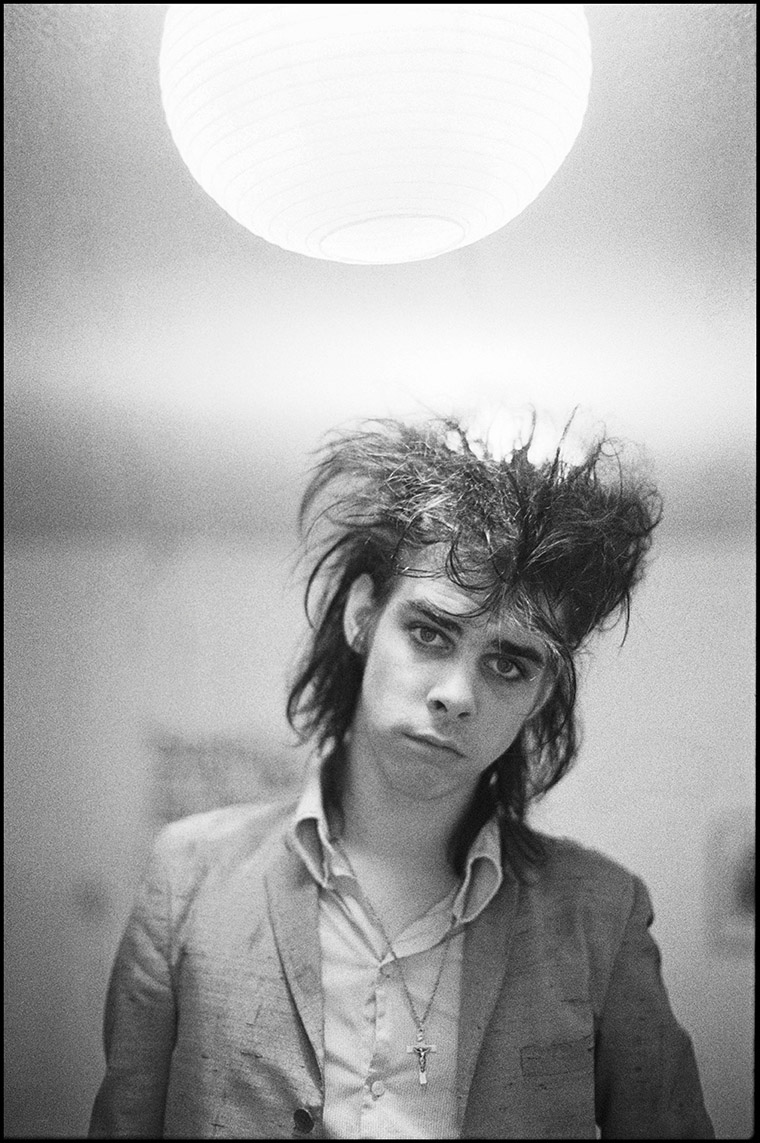 Nick Cave of the Birthday Party in a Kilburn press office London, UK on 15 July 1982 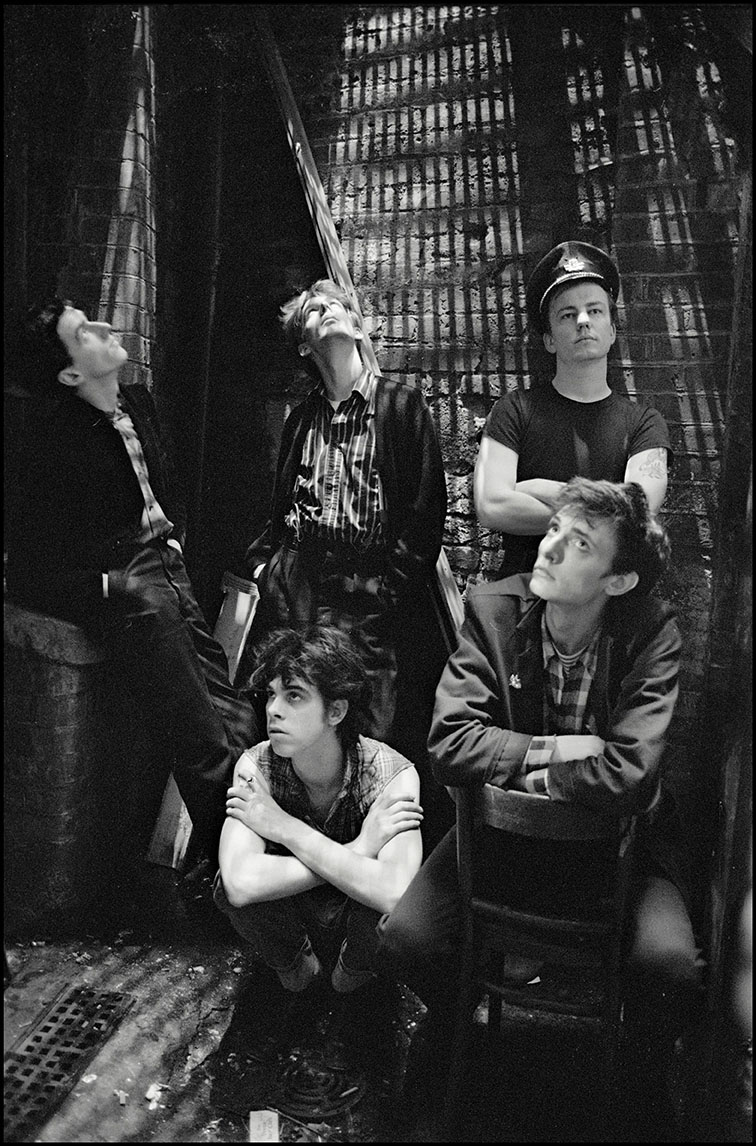 Nick Cave & The Birthday Party backstage at The Venue, Victoria, London, UK on 15 May 1981 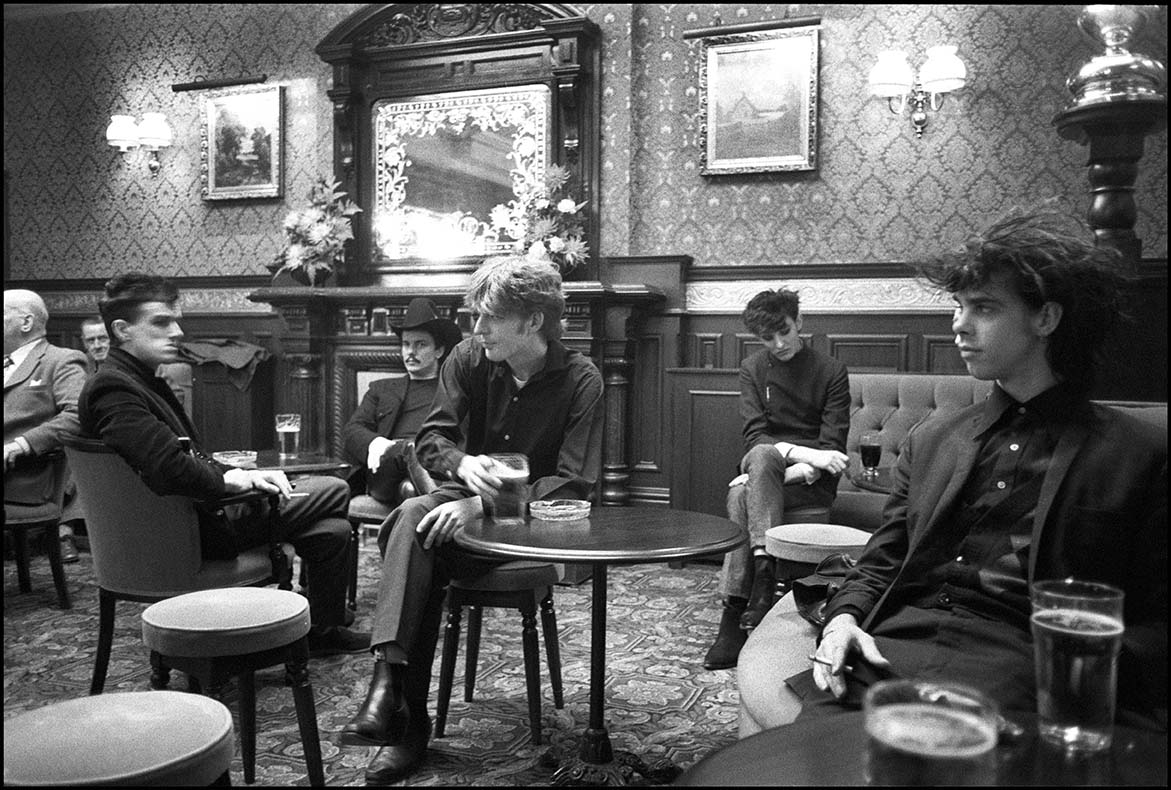 Nick Cave and the Birthday Party in a pub in Kilburn, London, UK on 22 October 1981

Australian Gothic: The Birthday Party 1981/82 is out now on Hanging Around Books.

Linkedin
RELATED ARTICLES
OTHER ARTICLES
A new project is documenting formerly incarcerated people as they transition back into civilian life.
Ahead of the release of their first collaborative album, the producer and rapper talk psychedelics and the state of UK hip hop.
In his 2008 series, the photographer pictured himself as Angela Davis, Martin Luther King Jr., Malcolm X, and other prominent figures.
Yesterday thousands gathered outside Buckingham Palace after news of the Queen’s death broke.
With skyrocketing rents, packed out viewings, bidding wars and more, renting in London has never been harder.
The idea that a younger generation is abandoning work has become a popular narrative online, but it doesn’t necessarily reflect reality.