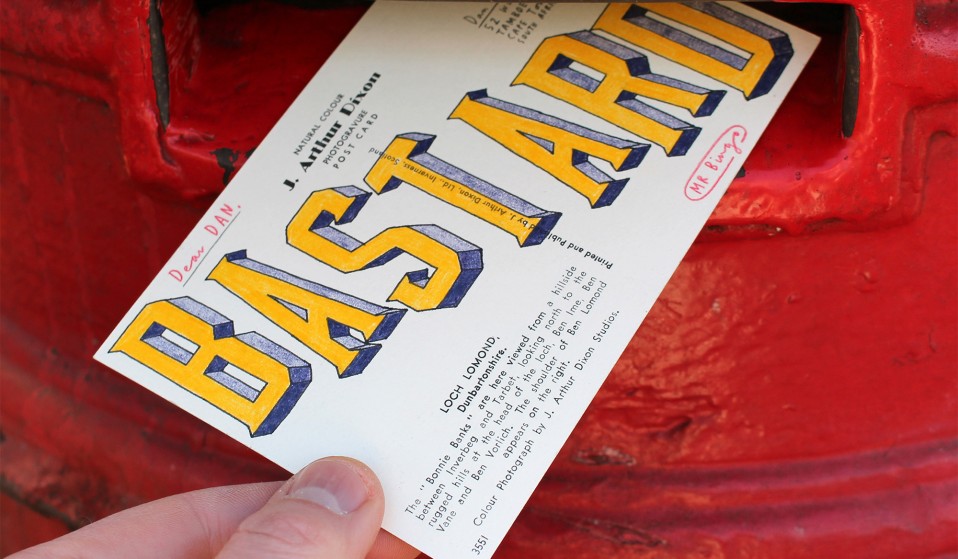 When this illustrator offered to abuse people for money, the demand became overwhelming. Now his creative insults have been compiled into one awesome book.

When London-based illustrator Mr. Bingo offered to abuse people for money, demand for his creative insults became overwhelming. Now, following a viral Kickstarter campaign, his best put-downs have been compiled into one hate-filled book of awesomeness.

One night, while working alone and feeling a bit tipsy, Mr. Bingo shared an unusual proposition on Twitter.

He promised to send a postcard with an offensive message to the first person who replied.

After being bombarded with interest, Mr. Bingo decided to give people the opportunity to pay for his abusive drawings. But it quickly became clear that he couldn’t keep up with demand. 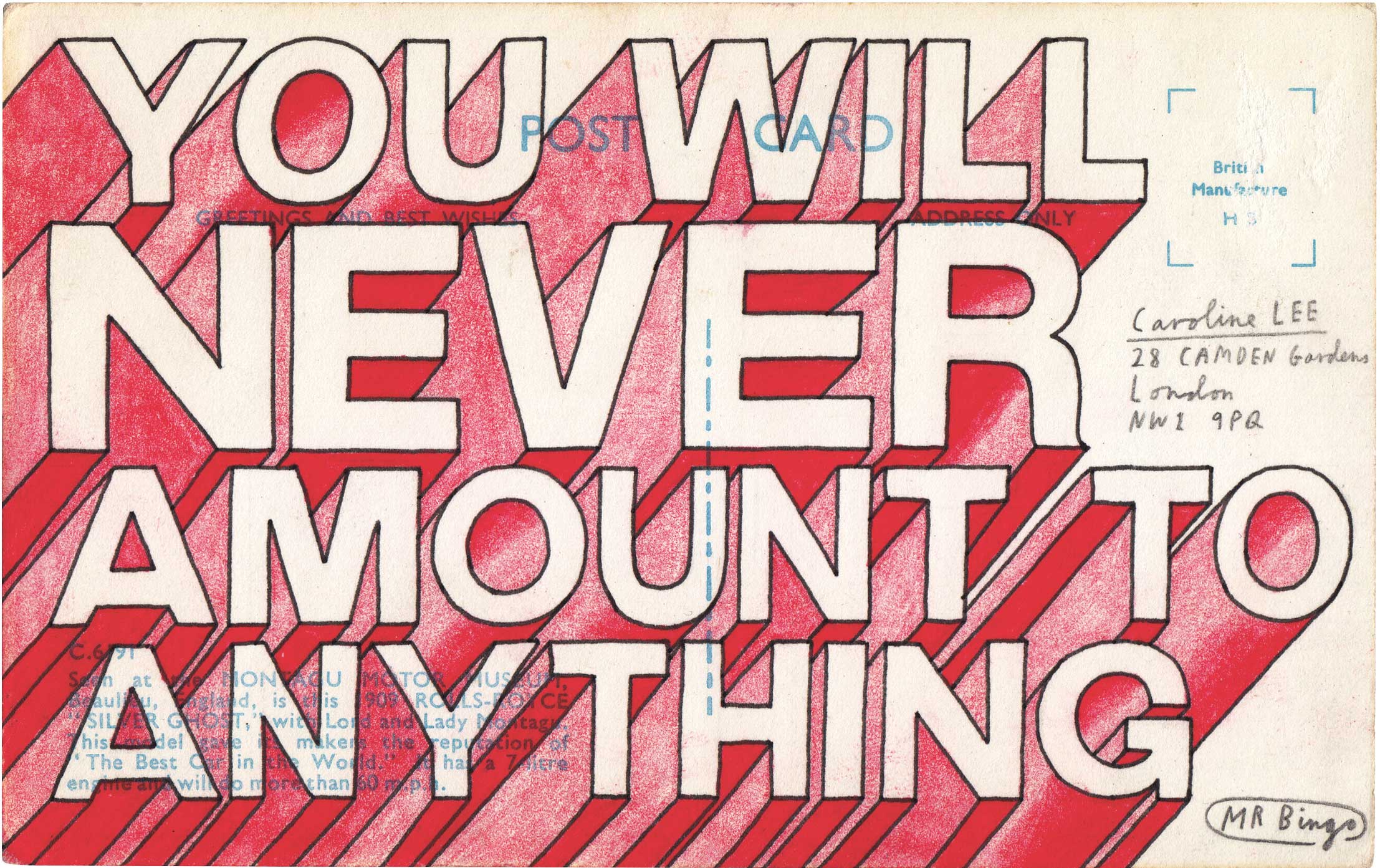 Now, having sent nearly a thousand postcards, the best of the best have been gathered in a self-published book – thanks to a Kickstarter campaign that went viral.

Why are humans of the world so desperate to receive hate mail? Not even Mr. Bingo can figure that one out. But the London-based illustrator can shed some light on the inspiration behind his little blasts of contempt.

The book contains 156 of your favourite postcards. What was the first postcard you ever sent and why?

The first person to reply was a man called Jonathan Hopkins. The postcard said, ‘Fuck you Jonathan, fuck you and fuck your shit legs’ with a drawing of some fat legs, severed at the top.

They looked a bit like one of those doner kebab things but with feet on, though it’s actually not featured in the book. 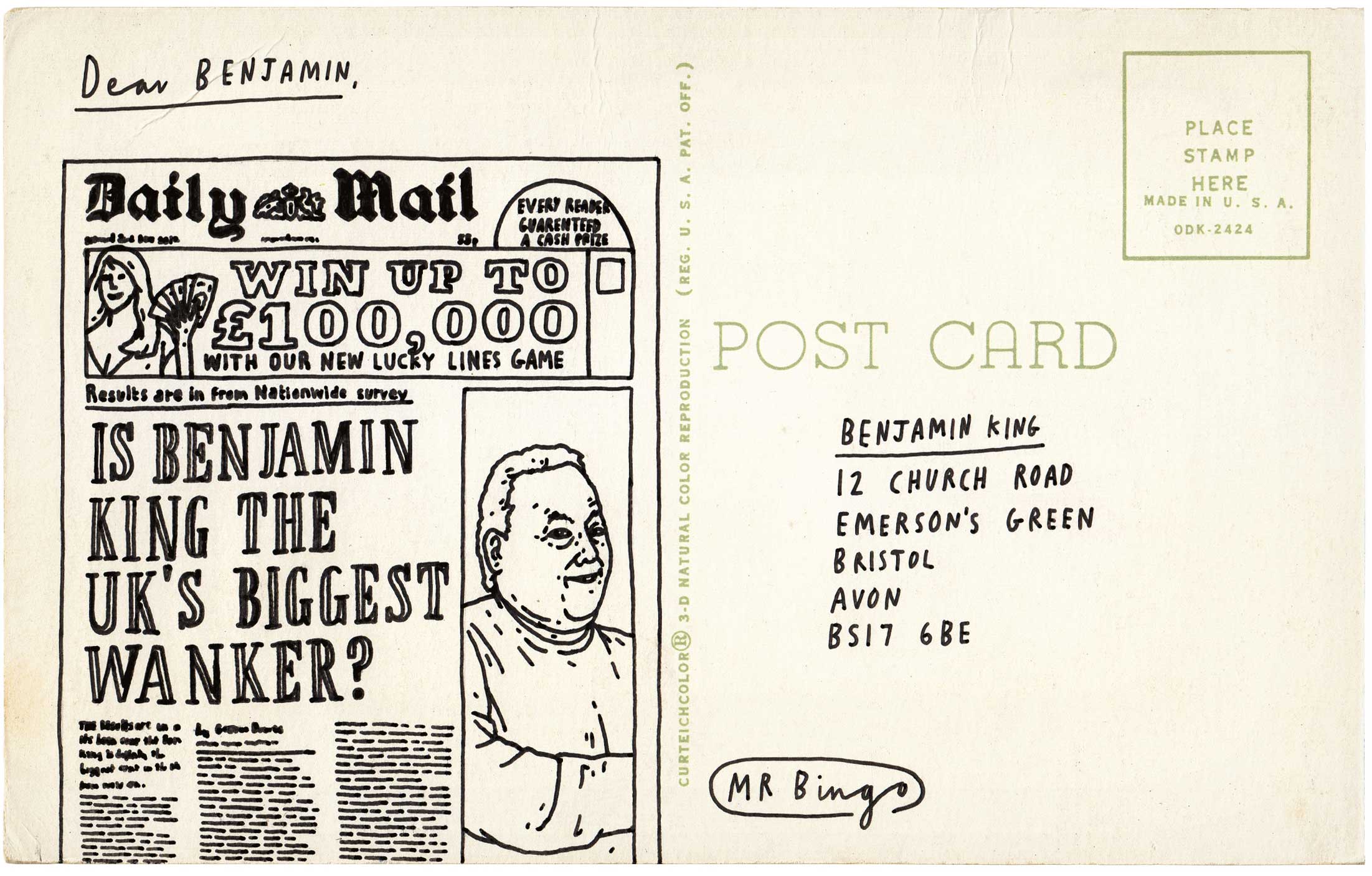 The postcards are wondrously varied. You previously said that your favourite postcard is the ‘Shit at boats’ one. What are some of your others?

One is a Venn diagram with Hitler in one circle and Ronald McDonald in the other, with ‘You’ in the overlapping section. One of the earliest ones I did is still one of my favourites.

It’s a picture of a large man reading a book at a desk and it says ‘Give up your unrealistic dreams’.

Another one has a drawing of an unattractive girl with a cropped rectangle of just her eye and a bit of her hair next to her and says ‘Your dating profile is dishonest’. I am also fond of one I did of a fat person bending over and it simply says ‘Big arsed cunt’. 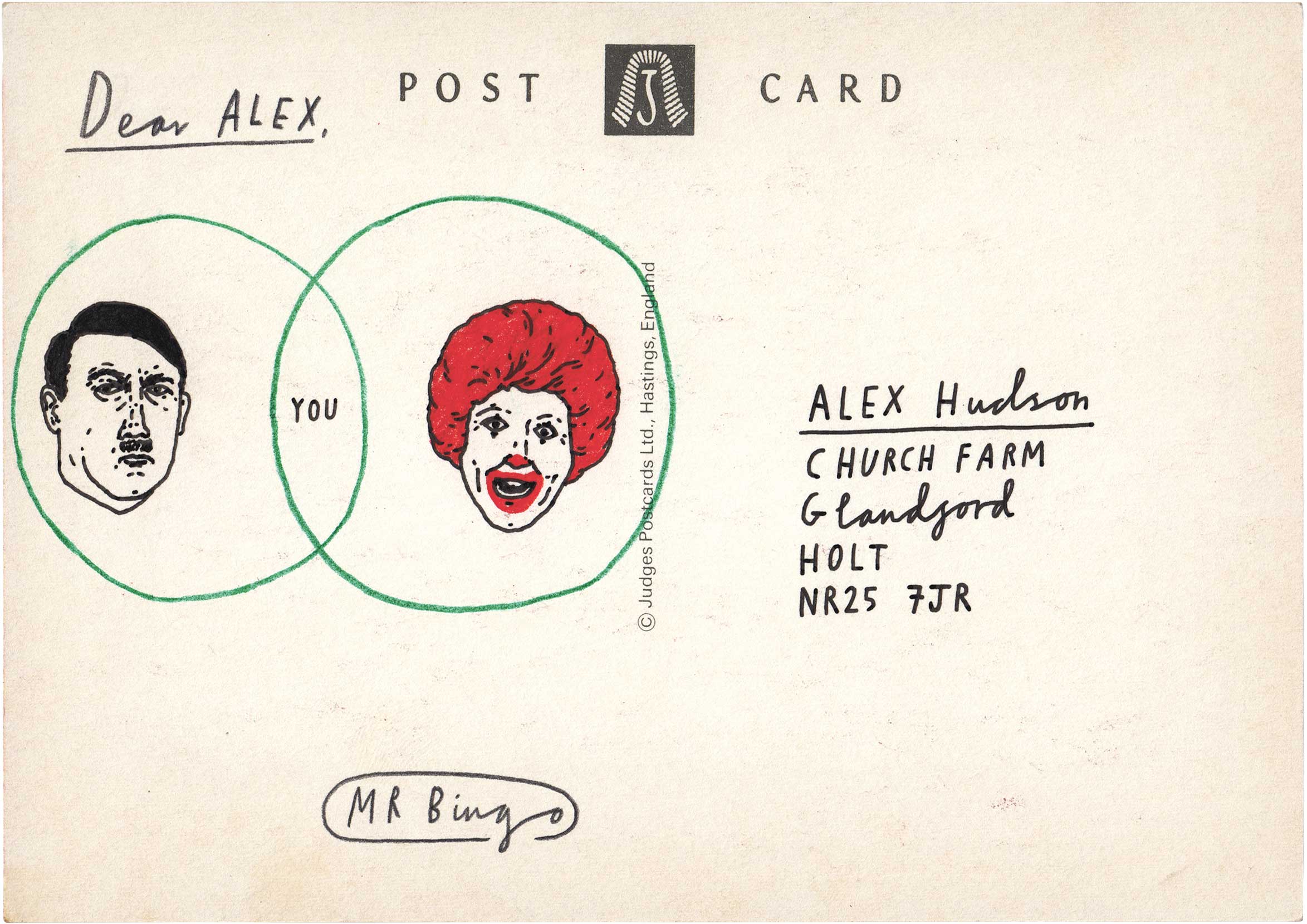 Some of the insults are pretty niche. Do any come from personal experience?

Some of them are just surreal and come out of my head, but many of them are inspired by real life.

Sometimes I’ll see something like a man in a suit with a ponytail on a micro scooter, proudly whizzing to work, and I just think ‘cunt’ …He’ll end up being the subject of a Hate Mail. 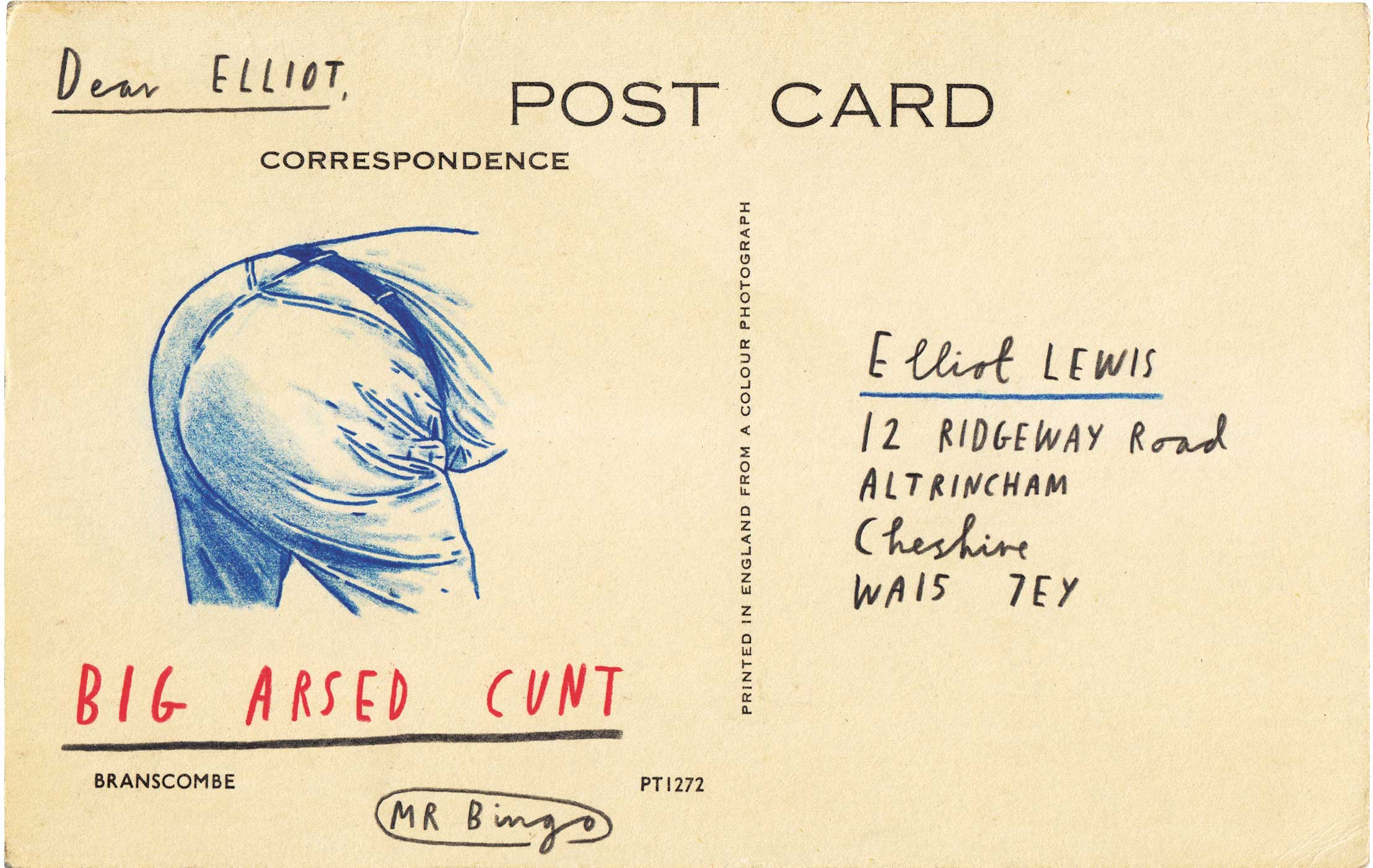 Is there any correlation between the nature of the postcard, the person you send it to and the insult you draw on it? Or is it just luck of the draw?

There’s no correlation, it’s just random abuse. I don’t look at the front of the postcard, so if anyone finds a tenuous link between the postcard front and my ‘artwork’, it’s pure coincidence!

I don’t research the person because a) It would take too long and b) It would be too close to bullying. 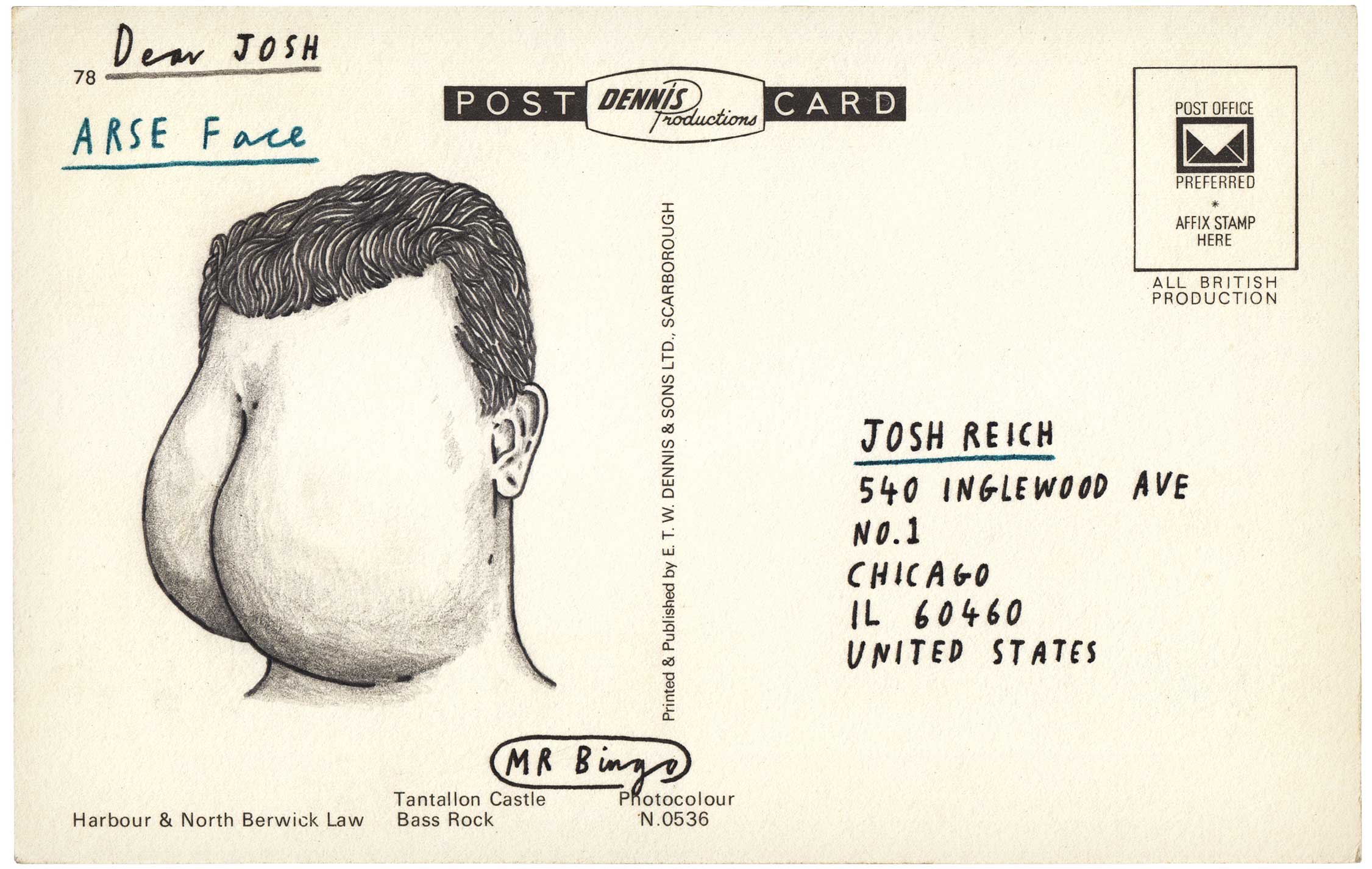 The book itself is the product of an incredibly successful Kickstarter campaign. What have you learned along the way?

I learned a lot from the whole self-publishing experience, mainly that working with super talented people who can do things that you can’t is really good.

It means you make some great stuff that you would never have been able to achieve on your own. I’ve always been quite a solitary worker so this was the first time I’d really had a go at collaborating with others creatively. 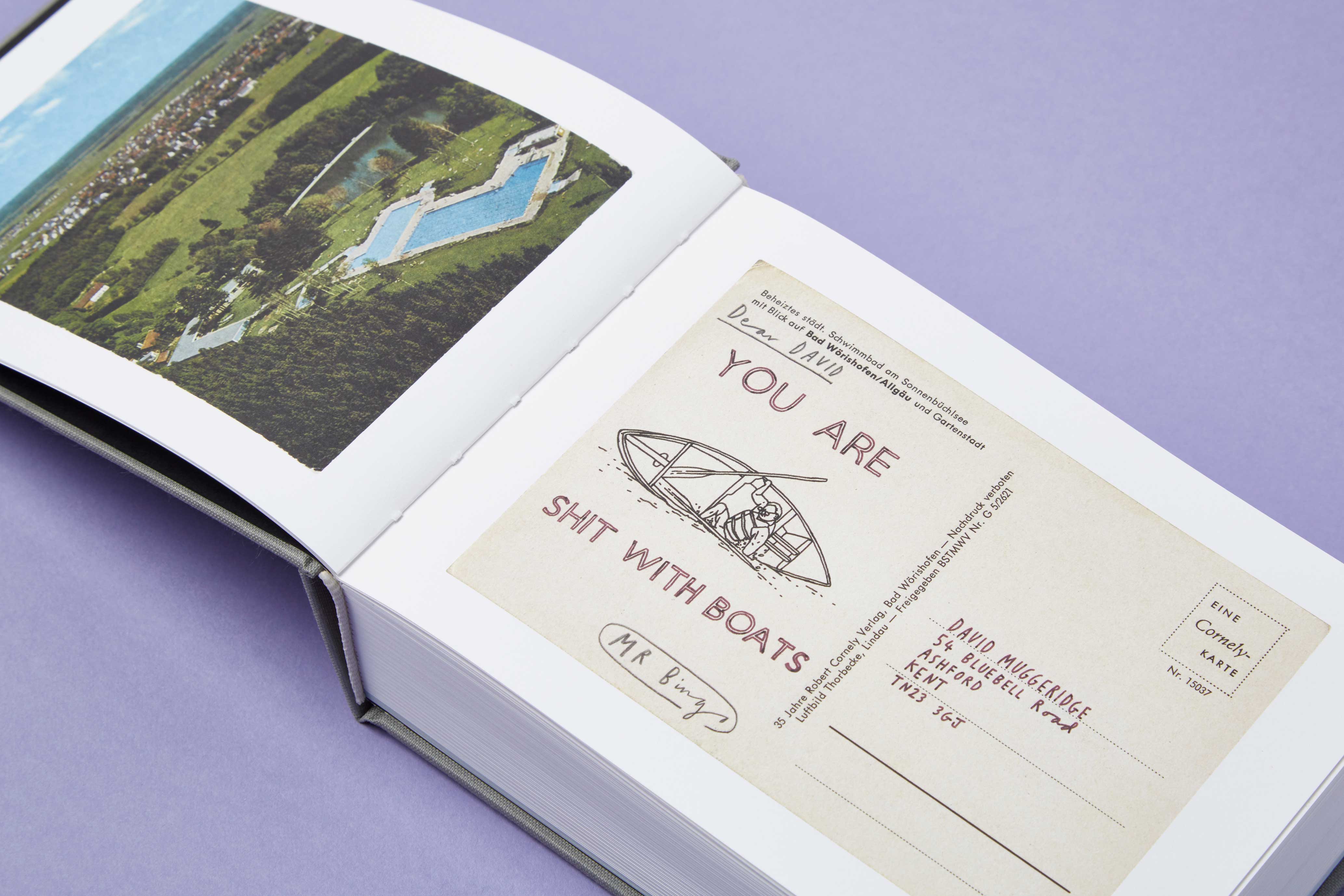 All of this stuff was learned in a few months! It was pretty exhausting, though. I estimate that I did about a year’s worth of work in four months. There were definitely a few break-down moments!

The great thing about Vintage publishing this new version of the book is that I don’t really have to do anything and it just appears in the shops! 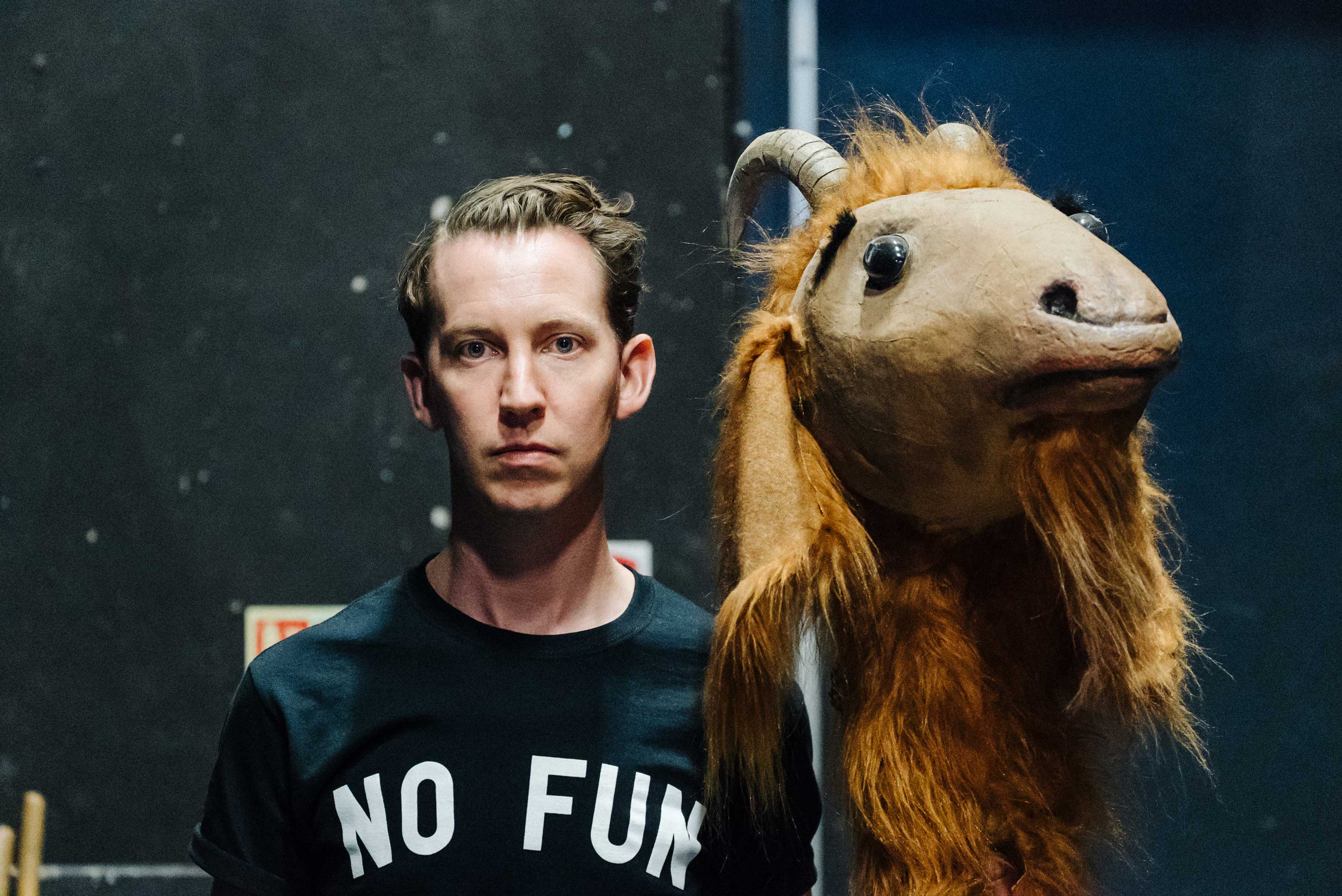 Is this the end of Hate Mail?

I said I wouldn’t do any more after this book. But who knows, maybe I’ll re-open it again one day.

I have just found out about a remote Austrian village called ‘Fucking’ so I thought if I did re-open it, that would be the place I’d go to create the new ones.

Linkedin
RELATED ARTICLES
OTHER ARTICLES
Photographer Bud Glick recounts documenting everyday life in the area, and what it taught him about the Chinese immigrant experience.
A sharp increase in officers armed with the electrical weapon is resulting in serious injuries and deaths.
Students are being left to languish in unsafe housing, in some cases leading to serious health complications.
From the chip shops, to the bingo parlors and burlesque dancers, photographer Mike Coles remembers capturing scenes of holidaymakers by the English coast.
Yesterday, rail workers came together to protest poor pay, working conditions and job cuts in their latest round of strikes.
With the virus now a global health emergency, we must take steps to fight misinformation and demand a swift UK-wide vaccine roll out, writes Phil Samba.