Art & Culture / The defiant spirit of the Battle of Lewisham, in photos 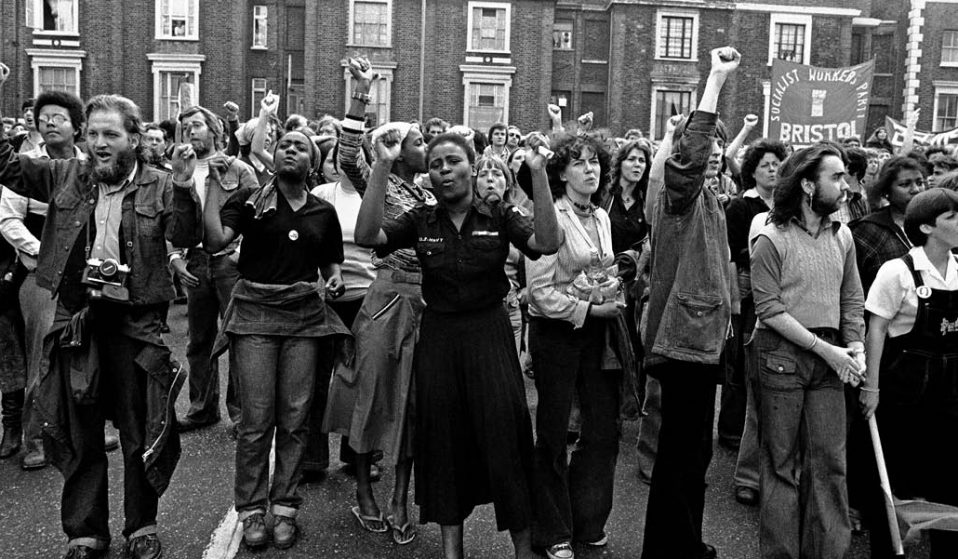 Photographer Syd Shelton recounts capturing the anti-racist counter-protest in South London which saw the National Front suffer a defeat from which it never recovered.

Photographer Syd Shelton recounts capturing the anti-racist counter-protest in South London which saw the National Front suffer a defeat from which it never recovered.

In the wake of global independence movements following World War II, the British Empire collapsed, the economy declined, and the extreme-right began to reassert itself on the national stage. During the late 1960s, the National Front (NF) rose to prominence by fanning the flames of racism and xenophobia to expand its power base.

The NF began targeting South London – home to Afro Caribbean and South Asian immigrants – to make their stand. They announced plans for an “Anti- Mugging March” from New Cross to Lewisham on August 13, 1977.

The march was precipitated by the arrest of young Black men and women known as the Lewisham 21. On May 30, the police raided their homes at dawn and charging them in connection with a series of muggings over a period of six months. 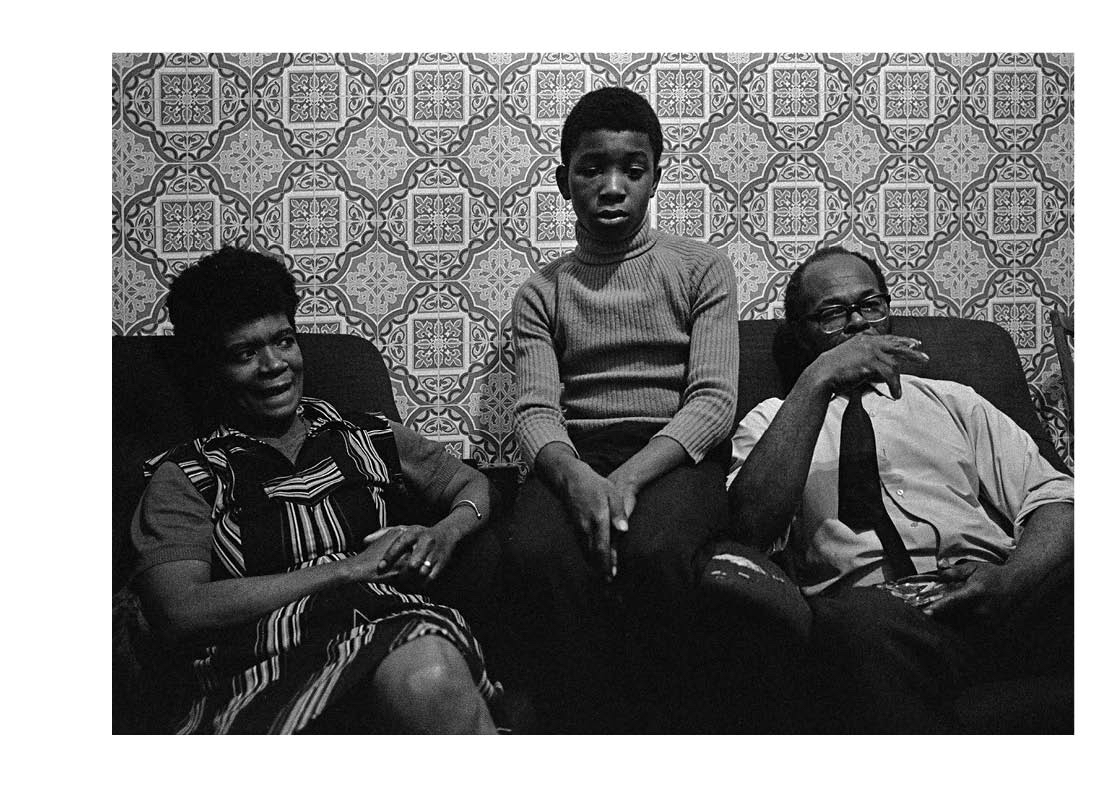 The hearings brought about protests, with the NF showing up to oppose those criticising police tactics. Seizing the opportunity to capitalise on the chaos, the NF organised their march. In response, the All Lewisham Campaign Against Racism and Fascism organised counter-demonstrations for that same day, bringing together some 4,000 people from 80 organisations across the UK.

The Metropolitan Police (MP) sent 5,000 officers, including the Cavalry Division, employing riot shields for the first time in mainland Britain. The MP escorted the NF carrying Union Jacks through the streets.

“It was about intimidating and frightening people just as the Nazis had done in the streets of Germany in the 1930s,” says British photographer Syd Shelton, who documented the events in the new book, The Battle of Lewisham August 13th 1977 (Café Royal Books). 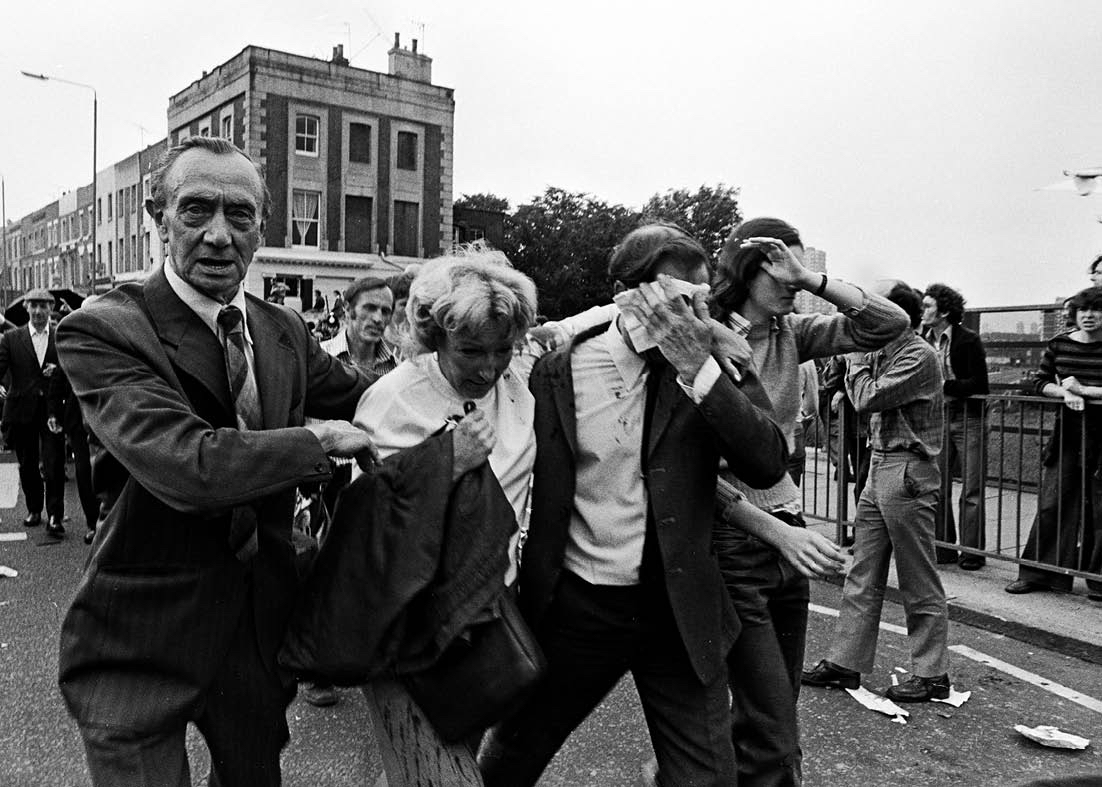 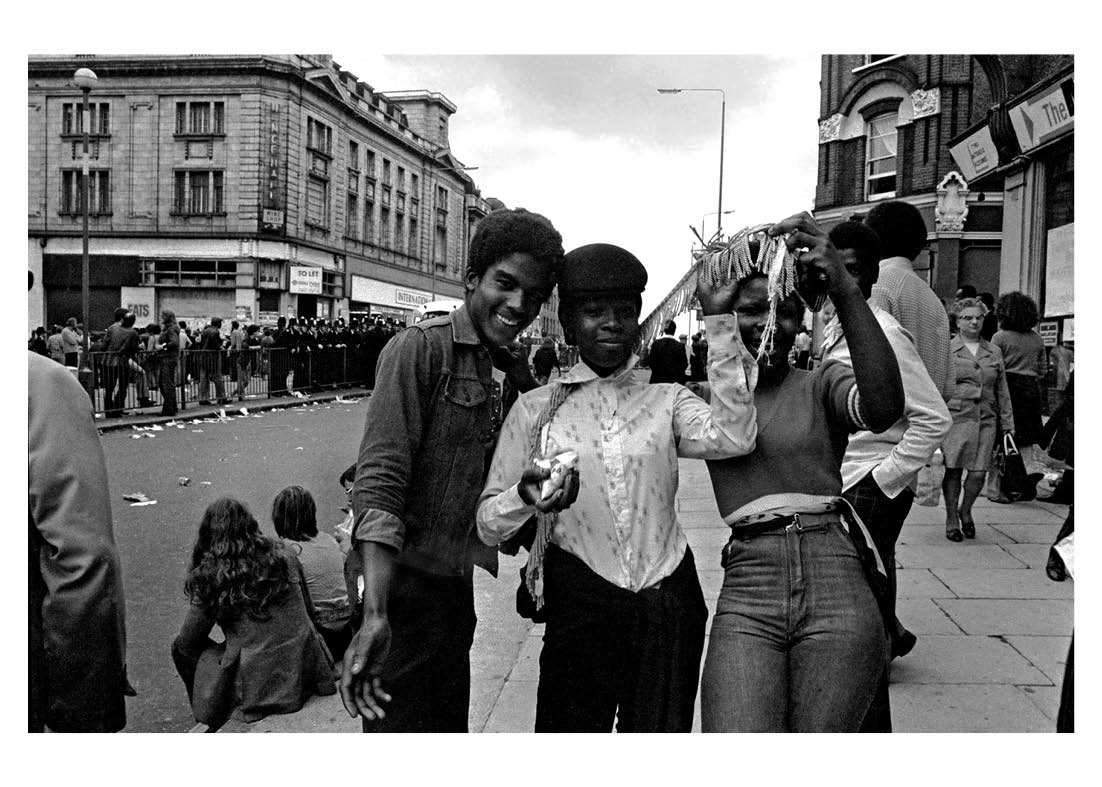 “The National Front wanted a reaction and of course they got it, but there was another agenda that day,” Shelton says. “Thousands of people had scores to settle with the Metropolitan Police, who without a doubt were incredibly racist. The police knew there was going to be a serious confrontation.”

The NF quickly found themselves outnumbered. As clashes between police and protesters escalated, NF members fled the scene.

“Police motorbikes were set on fire and the police responded with truncheons. There’s one photograph where the horses are coming towards me – I was knocked over to the ground but still had the camera in my hand so I kept going,” Shelton says. 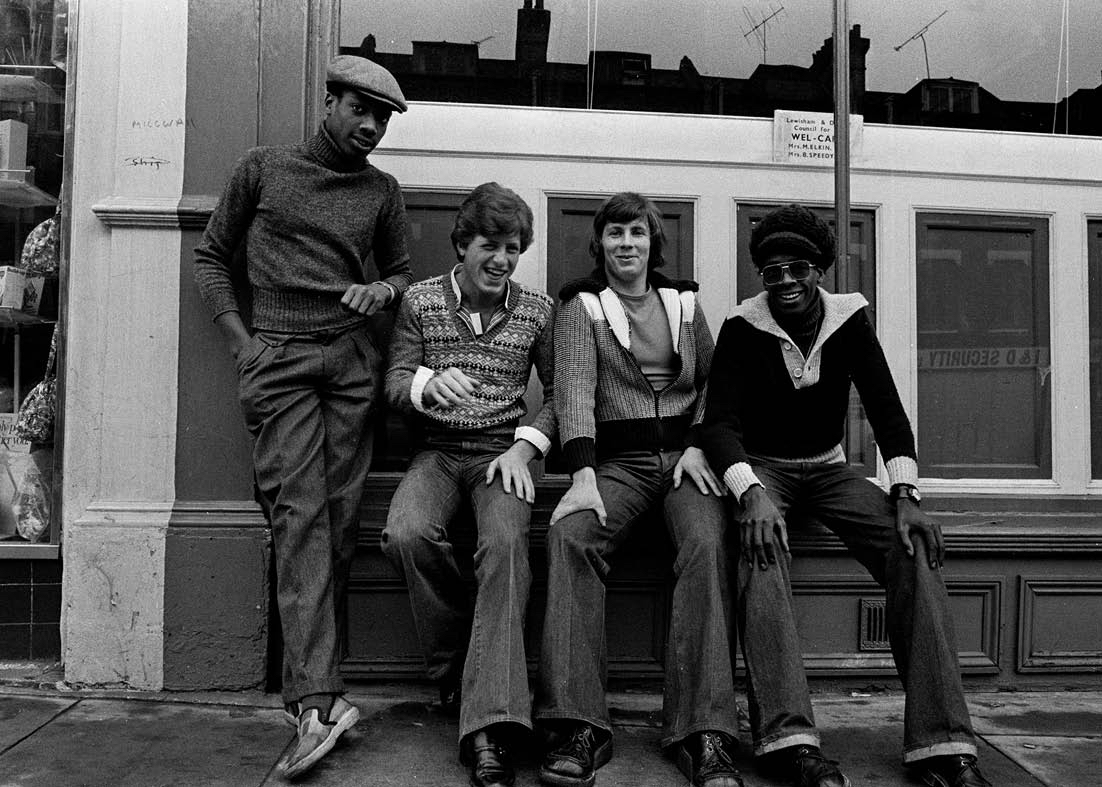 “It was a violent day, but there was also a degree of triumph because the people were not going to take it anymore. More than 200 people were arrested but nobody really cared because they felt like they had nothing to lose and everything to gain.”

Like Oswald Mosley’s British Union of Fascists, who were defeated at the 1936 Battle of Cable Street a mere four miles away, the Battle of Lewisham proved to be a definitive loss for the NF.

Looking back at these images, Shelton observes, “It’s the most incredibly empowering feeling to come together in huge numbers and feel you can actually change the world — because if you don’t things can do in the opposite direction.” 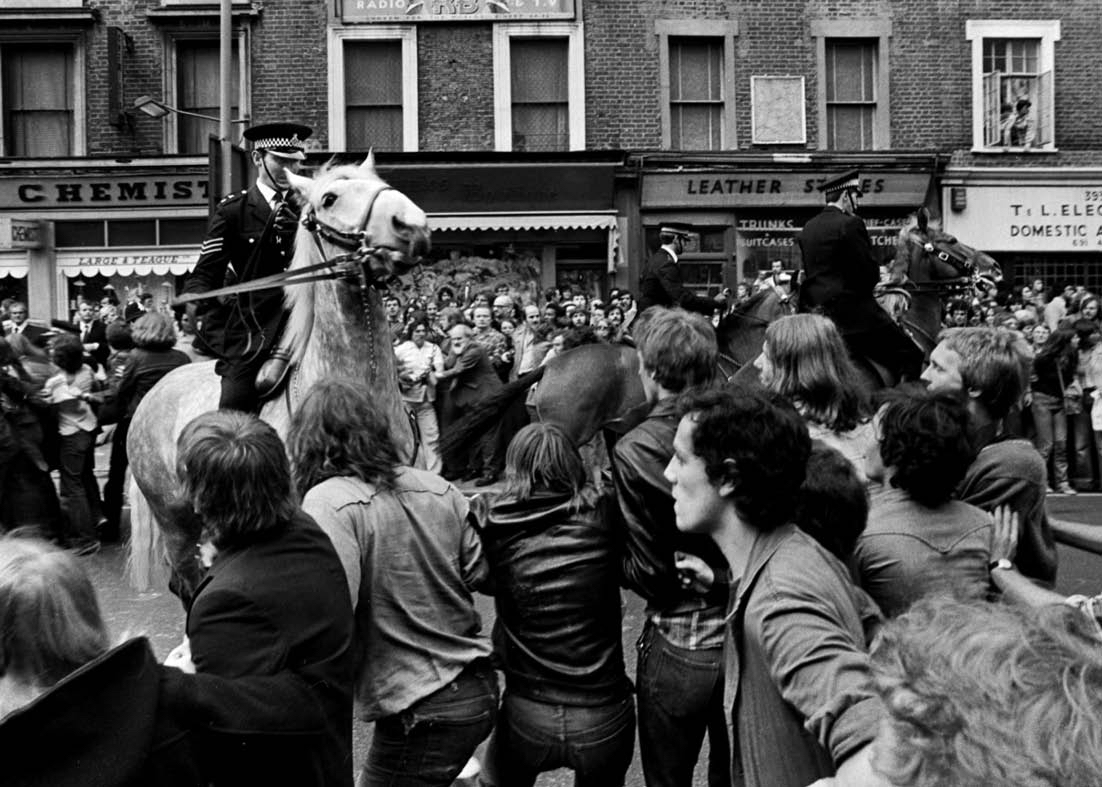 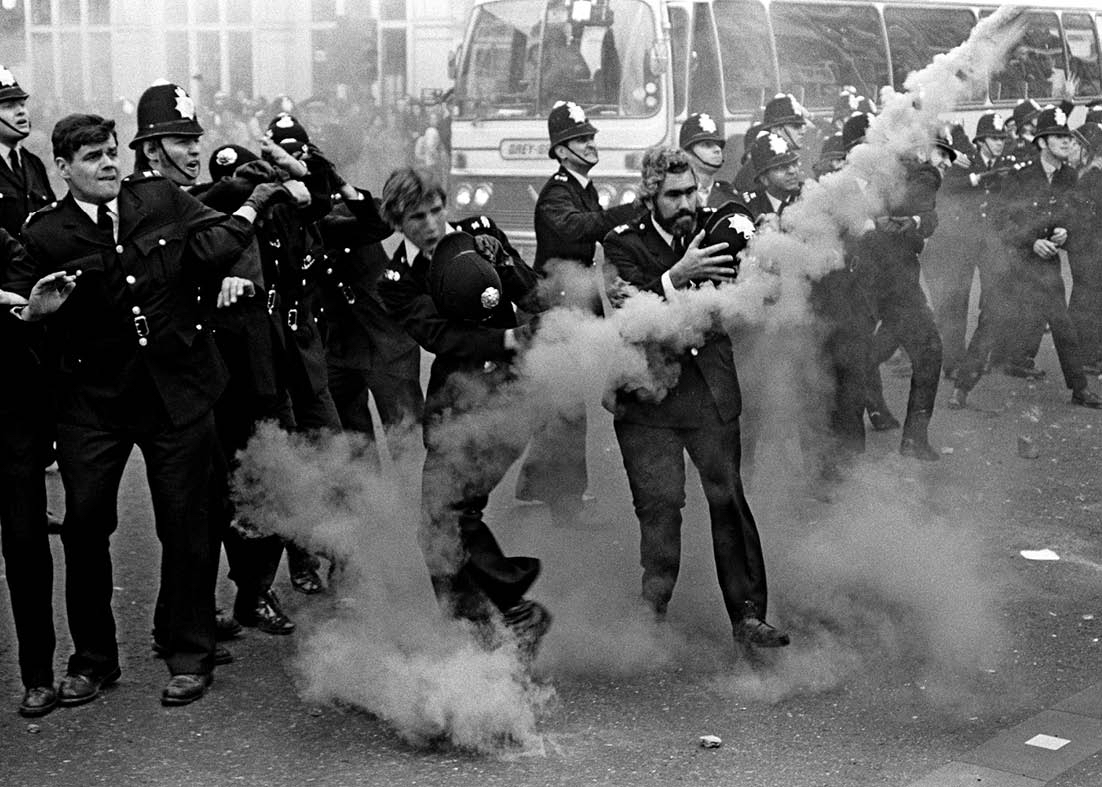 The Battle of Lewisham August 13th 1977 is out now on Café Royal Books.

Linkedin
RELATED ARTICLES
OTHER ARTICLES
Rhiannon Adam spent three months capturing an ageing society wracked by division, isolation, and the aftermath of scandal.
By turning a real-life crisis into daytime television fodder, TV bosses have once again shown themselves to be completely out of touch with audiences.
A new project is documenting formerly incarcerated people as they transition back into civilian life.
Sean Maung’s photos are a love letter to the Black and brown communities that make up New York.
Birdy Chu reflects on documenting the historic moment in which the territory was formally passed back from the UK to China.
Following the announcement of an 80% hike in the energy price cap from 1st October, crowds gathered outside the offices of energy regulator Ofgem to protest and declare their intention to undertake a payment strike.