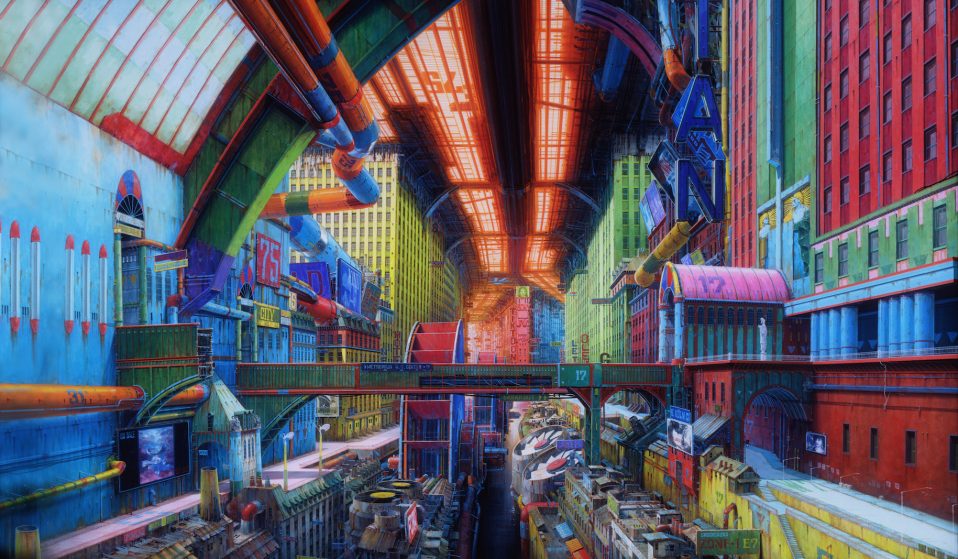 A new book celebrating the creative process behind Japan's animated cityscapes offers both architectural escapism and bold imaginings of a near future.

A new book celebrating the creative process behind Japan's animated cityscapes offers both architectural escapism and bold imaginings of a near future.

In 1988, Japanese director Katsuhiro Otomo turned his best-selling manga into a $10 million feature-length anime. Set in the dystopian not-so-distant-future of 2019, Akira would captivate viewers with its vision of a lawless and post-apocalyptic Neo Tokyo, inhabited by motorcycle gangs, corrupt government officials, and undercover science experiments.

The same decade, in art studios across the capital, early pioneers such as Mamoru Oshii (Ghost in the Shell) and Hideaki Anno (Neon Genesis Evangelion), would join Otomo in utilising the onrush of new and invasive technologies in the ’80s – a period of economic boom in Japan – to imagine brave new worlds. Typically drawn by hand, these images would envision futuristic cities that would become defined by, and sometimes victim of, their own advancements.

“They were envisioning a future which was beyond their technical facilities at the time,” says Stefan Riekeles, author of Anime Architecture (Thames & Hudson). “Of course, that’s different today.” His book highlights the hand-drawn illustrations behind some of anime’s most prolific cityscapes. By looking at these original images, Riekeles believes that we can gain insights that are often lost on screen. 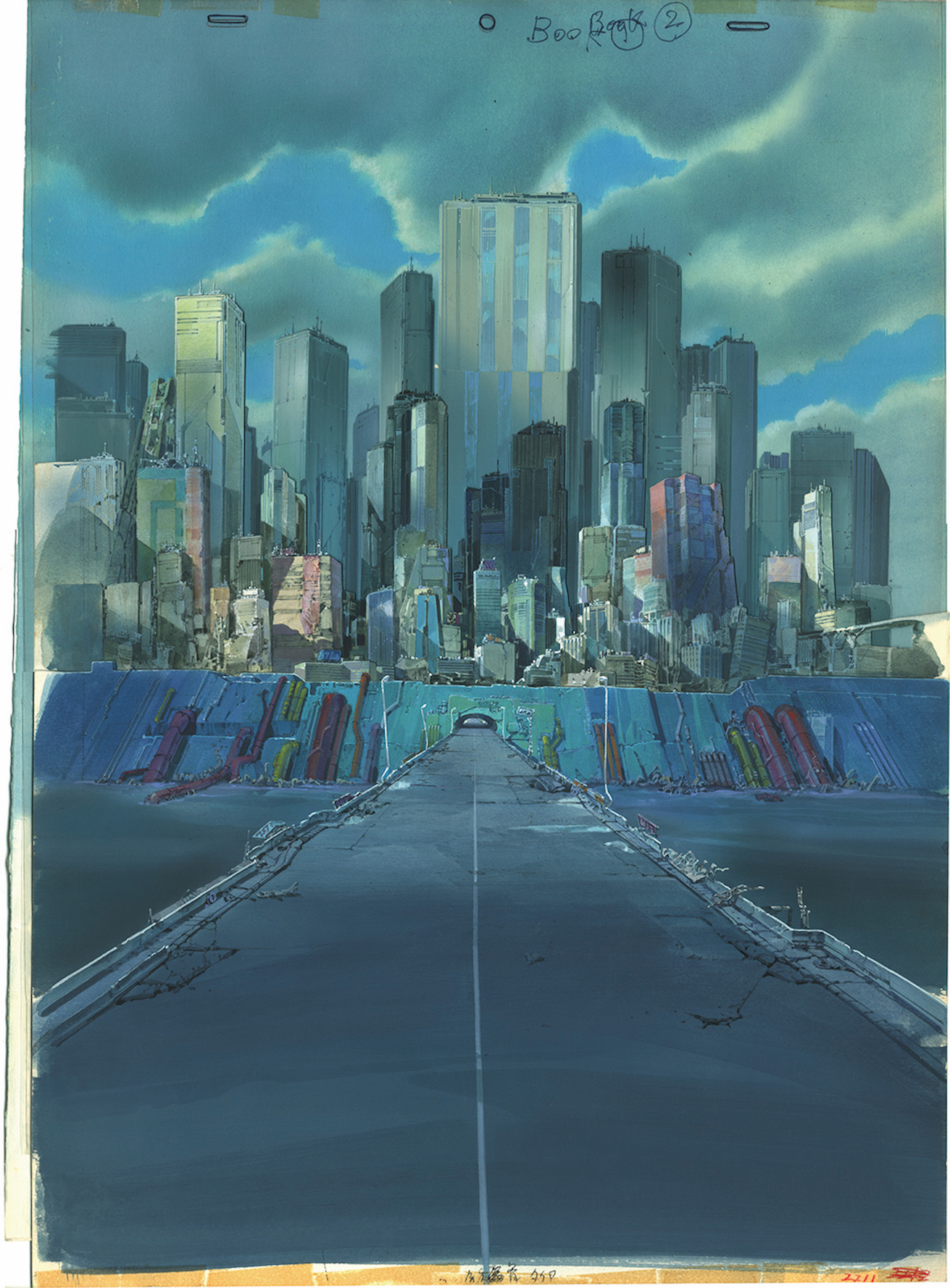 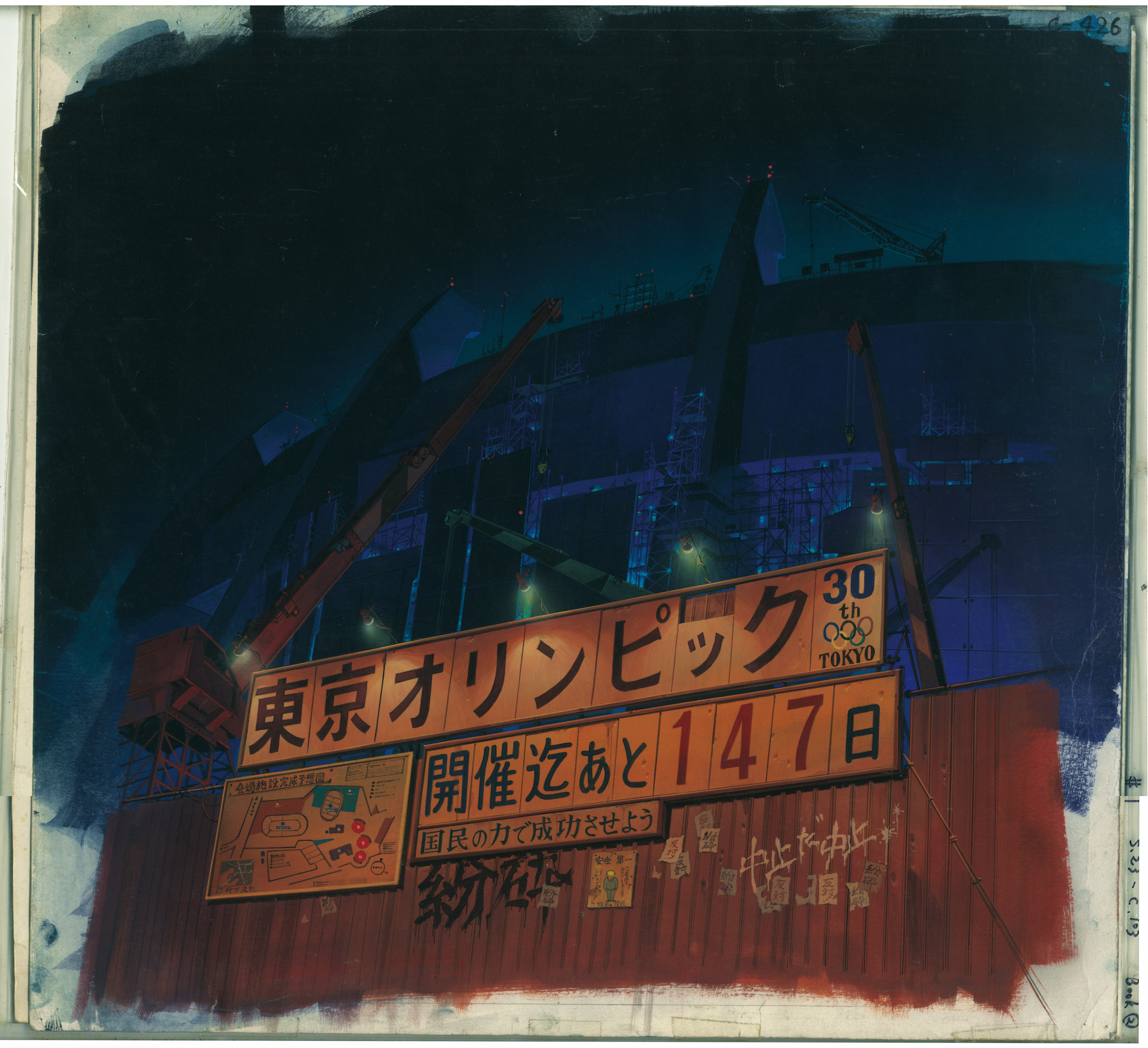 In Akira’s post-nuclear civilisation, for example, the vastness of Neo Tokyo, its countless highways and flyovers, is punctuated by key locations: the government research labs, the run-down bars, and the construction zone of the Kenzo Tange-inspired Olympic stadium. Towering high-rise buildings nod to Fritz Lang’s science-fiction drama film Metropolis, while the influence of Ridley Scott’s Blade Runner – also set in 2019 – can be felt in Neo-Tokyo’s neon lit and distinctly cyberpunk landscape.

“The whole city is designed to be destroyed,” Riekeles says, referencing Akira’s final 30 minutes, where a telekinetic Tetsuo triggers a thanatotic succession of events that results in the full annihilation of the city. At its most basic, the ending is a critique of late-capitalism and Japan’s doken kokka (construction state), where large amounts of public money was shovelled into government vanity projects at the expense of the public.

“As symbolised by the construction of the new Olympic Stadium and its subsequent destruction, Akira expresses the joy and sense of liberation that accompanies cataclysmic devastation, with its tearing down of old institutions,” explains Riekeles.

Unlike Neo Tokyo, Ghost in the Shell’s New Port City comes without either the destructive backstory of its predecessors, nor the feel of Tokyo itself, designed as it was to be more of a stand-in for the state of Hong Kong. Mamoru Oshii’s cyberpunk epic of an AI entity roaming cyberspace and hacking victims’ cybernetic brains takes place in 2029, where a global electronic network connects the world. 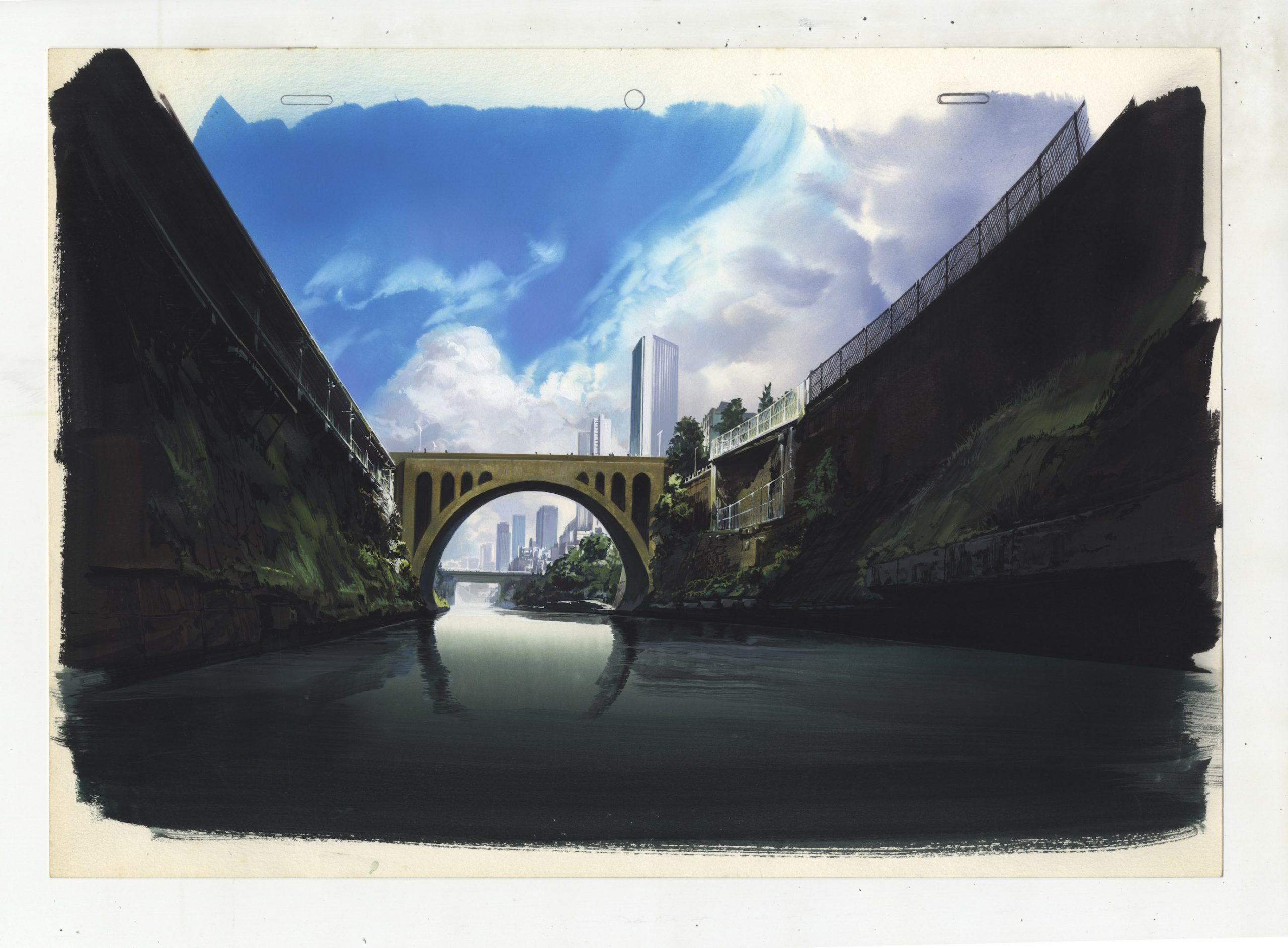 When imagining New Port City’s dark and dystopian landscape, art director Hiromasa Ogura took inspiration from Hong Kong’s old waterways and newly built high-rises to symbolise the information flow that turns the city into a gigantic data space. “He felt that the city of the near future will possess an element of the unknown – to achieve this uncanny quality, he sought to express the flood of information surging through this disparate environment,” explains Riekeles.

Neon Genesis Evangelion, in contrast, takes inspiration from the miniature sets of tokusatsu films, a popular genre of Japanese film, where the set is constructed in miniature and forms the arena for a battle between good and evil. The show is set 15 years after a worldwide cataclysm, in the futuristic fortified city of Tokyo-3. Vast machinery retracts buildings underground, defending the city from the encroaching threat of the ‘Angels’ – a race of giant monstrous beings hellbent on destroying humanity.

Unlike Akira and Ghost in the Shell, Anno’s skyline has no cyberpunk stylings. “It’s somewhere between a small Japanese town and the metropolis of Tokyo,” says Riekeles. What they do have in common, however, is their use of architecture to bolster the storyline. “In Anno’s radical perspective, the city appears as the sum total of all available technologies. As the ultimate extension of human senses and organs, it is both artificial and organic, thus Tokyo-3 itself is a cyborg,” he explains.

Whether built as an extension of the surrounding technology, or simply to be destroyed, these cities – and the illustrations that inspired them – serve as backdrops for profound and often existential reflections on the relationship between person and machine. Their visions of a near-future where tech has ‘taken over’ not only reveals the prevailing fears of the era – they also draw disconcerting parallels with our present. 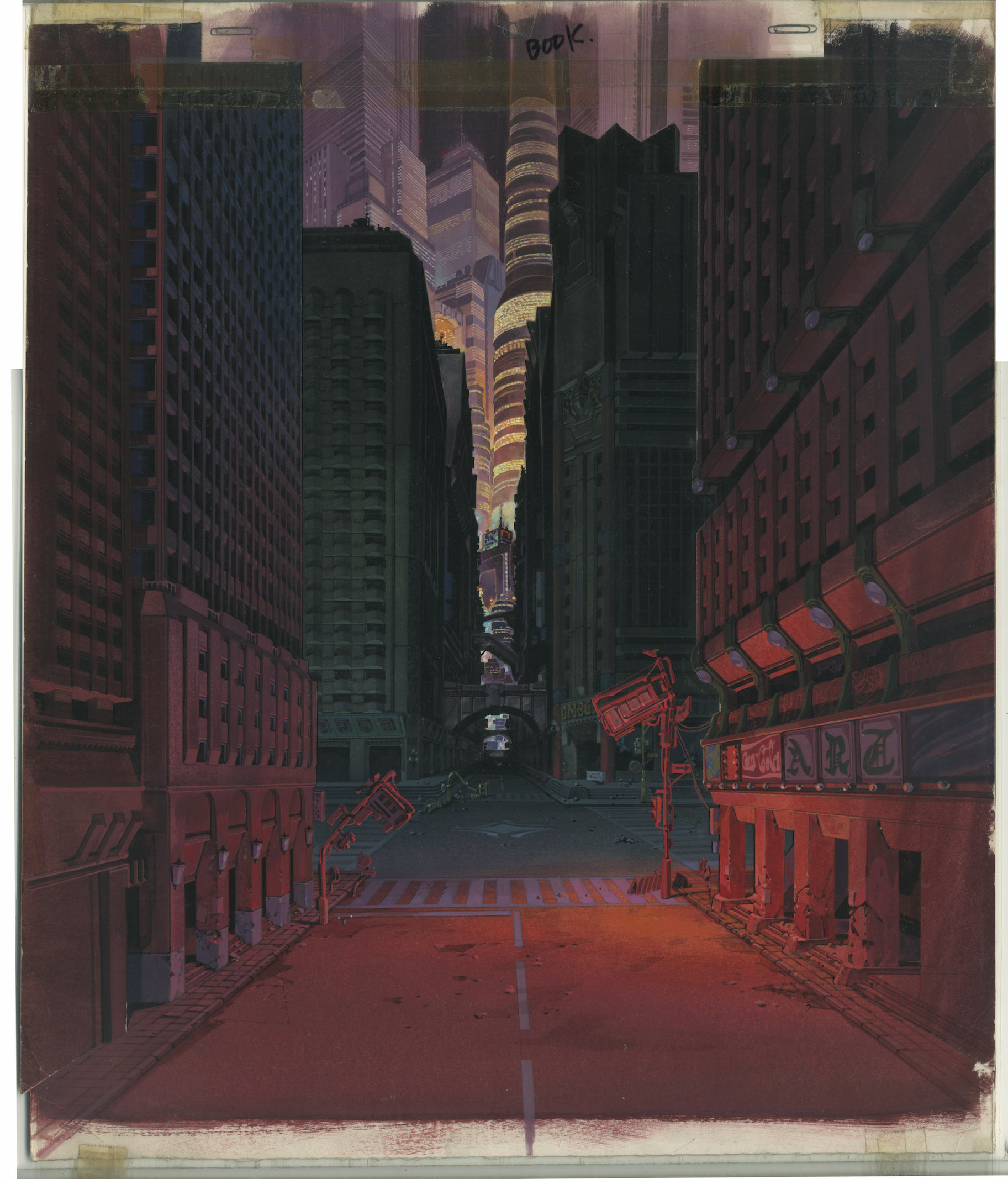 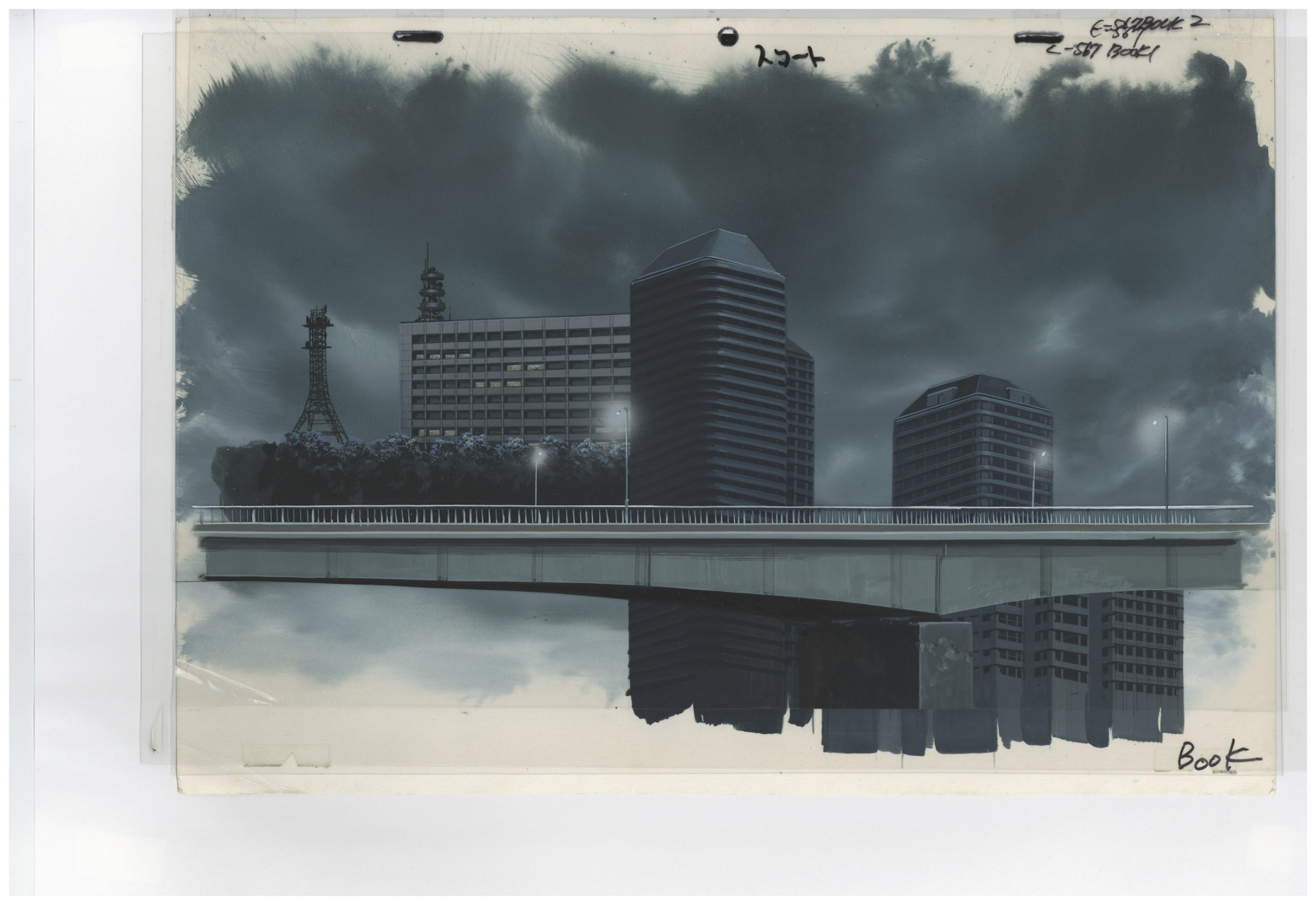 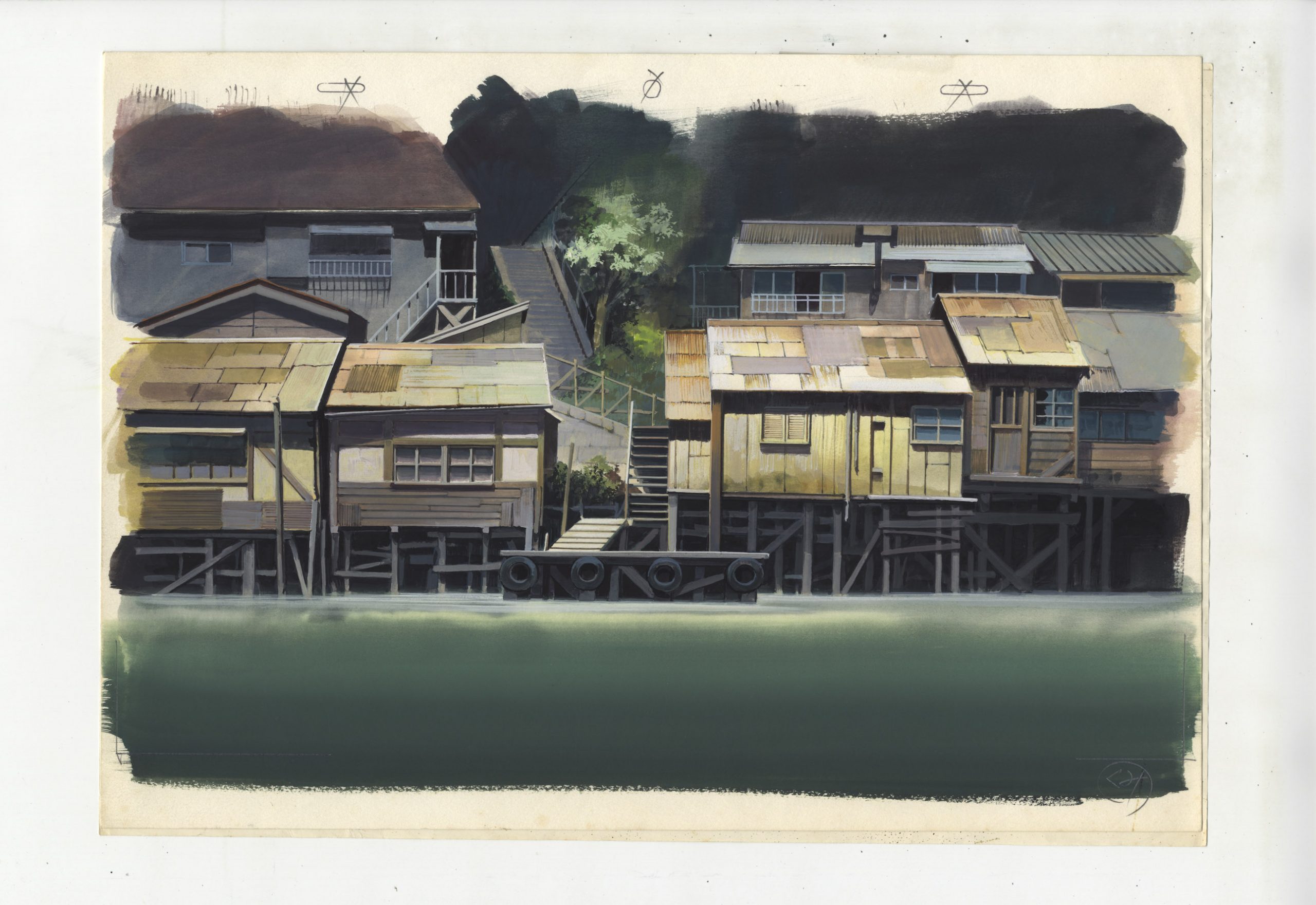 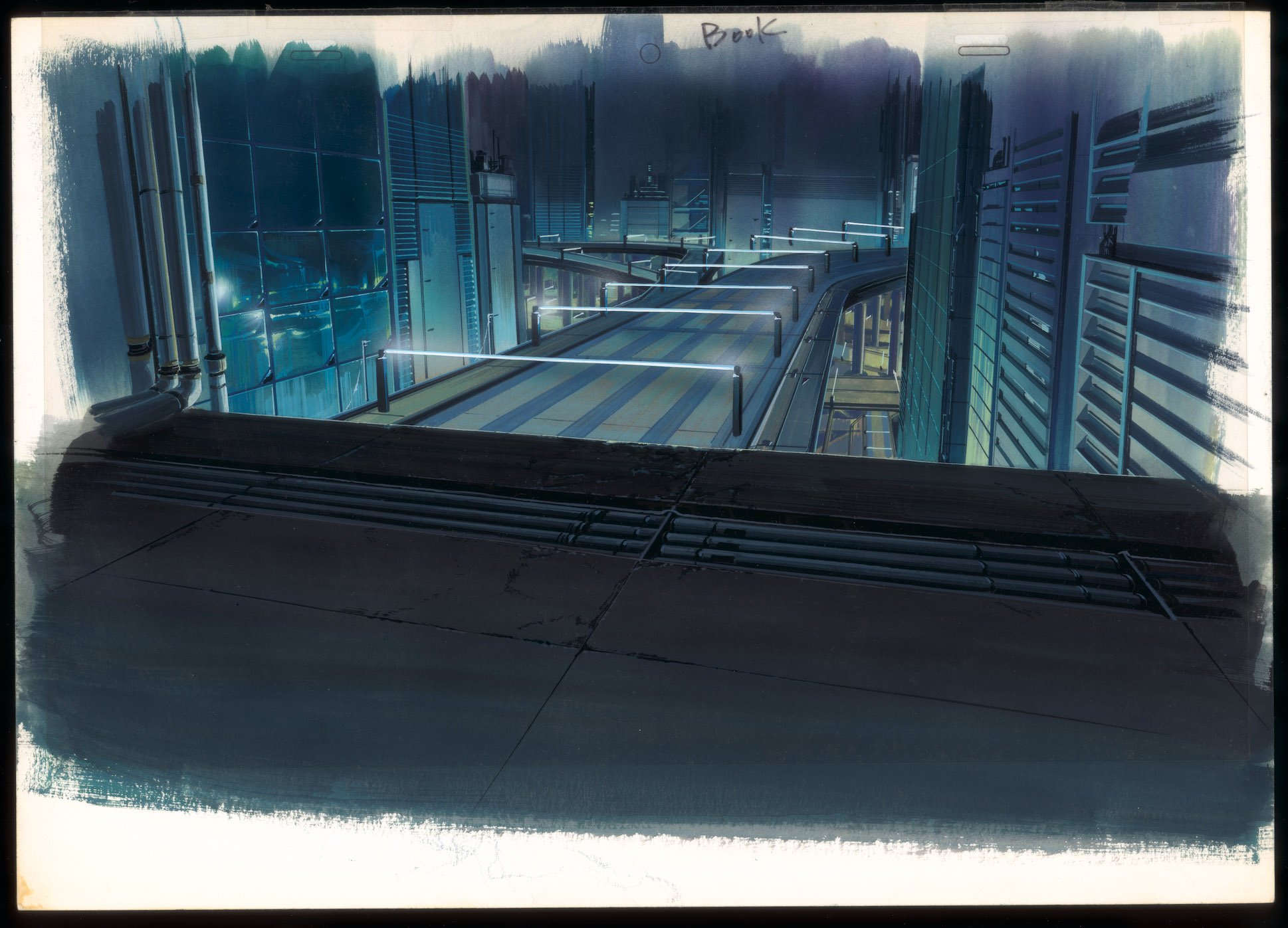 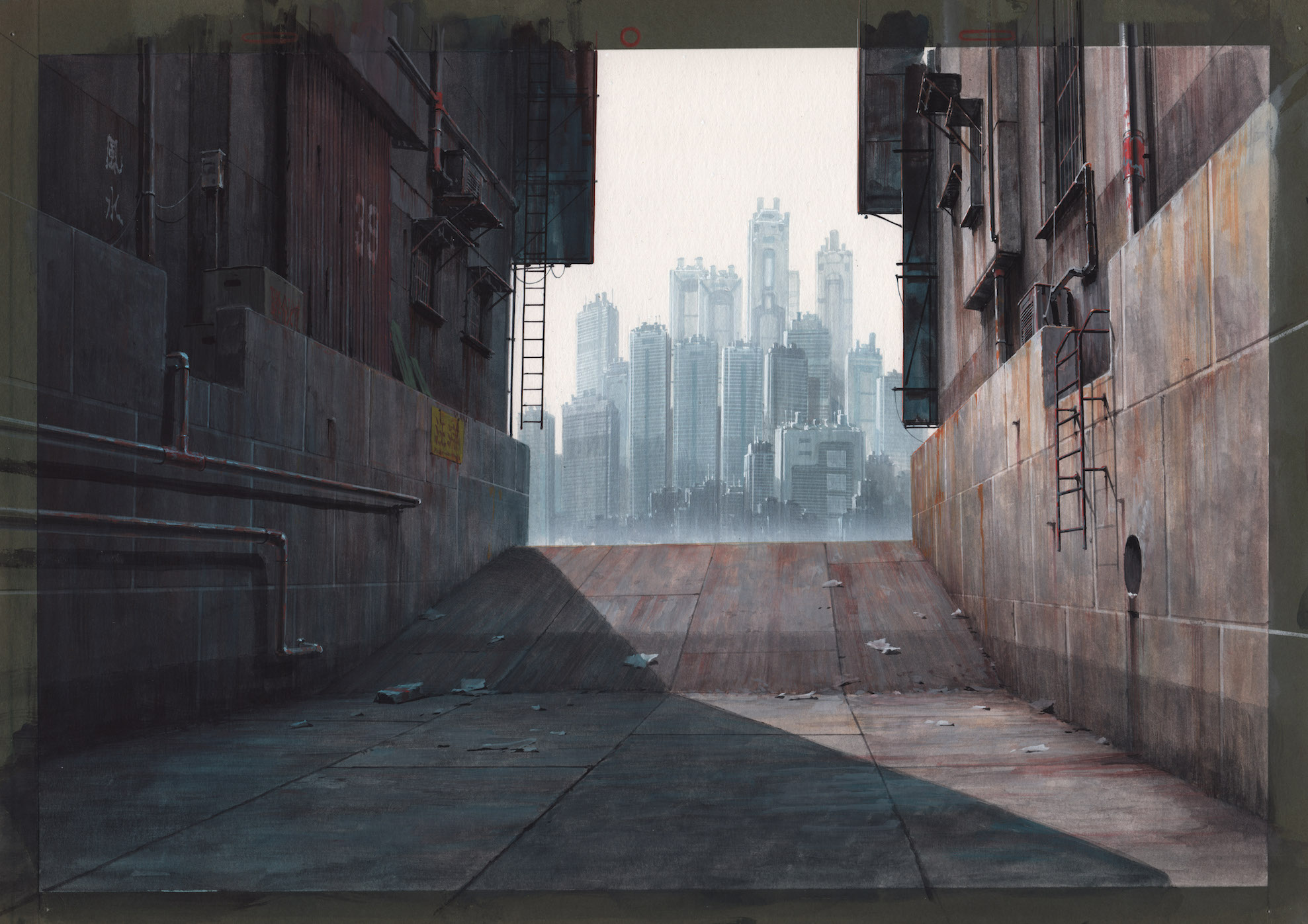 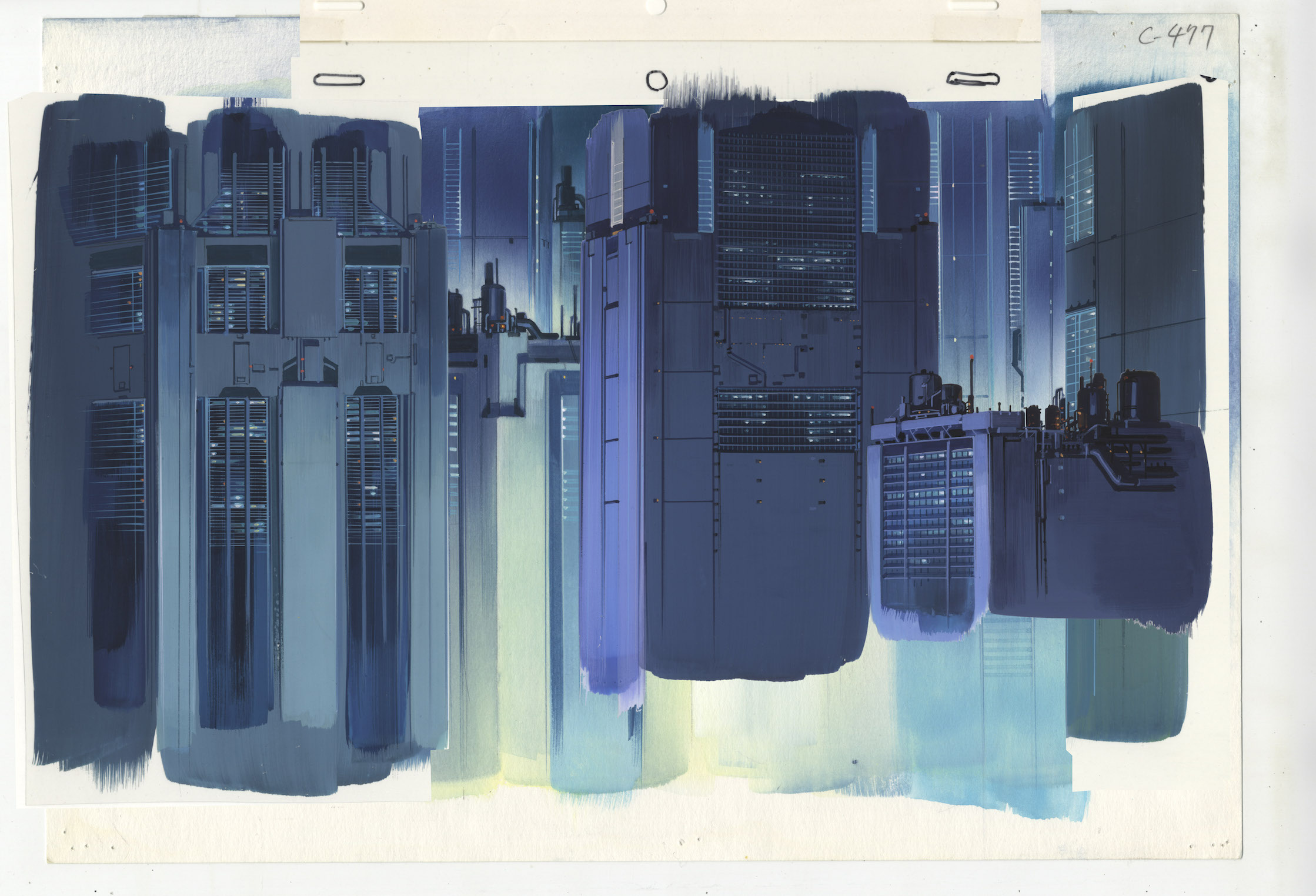 Linkedin
RELATED ARTICLES
OTHER ARTICLES
Rhiannon Adam spent three months capturing an ageing society wracked by division, isolation, and the aftermath of scandal.
In his 2008 series, the photographer pictured himself as Angela Davis, Martin Luther King Jr., Malcolm X, and other prominent figures.
The two-day long event returned to London this year, showcasing a spectacular parade, steel bands and Caribbean food.
Ahead of the release of their first collaborative album, the producer and rapper talk psychedelics and the state of UK hip hop.
Rogue landlords are exploiting young and inexperienced renters and leaving them in mental and financial turmoil, reports Niall Hignett.
For over a decade, gamblers have won big by employing people to place live bets from the court. But does this dubious method still work?