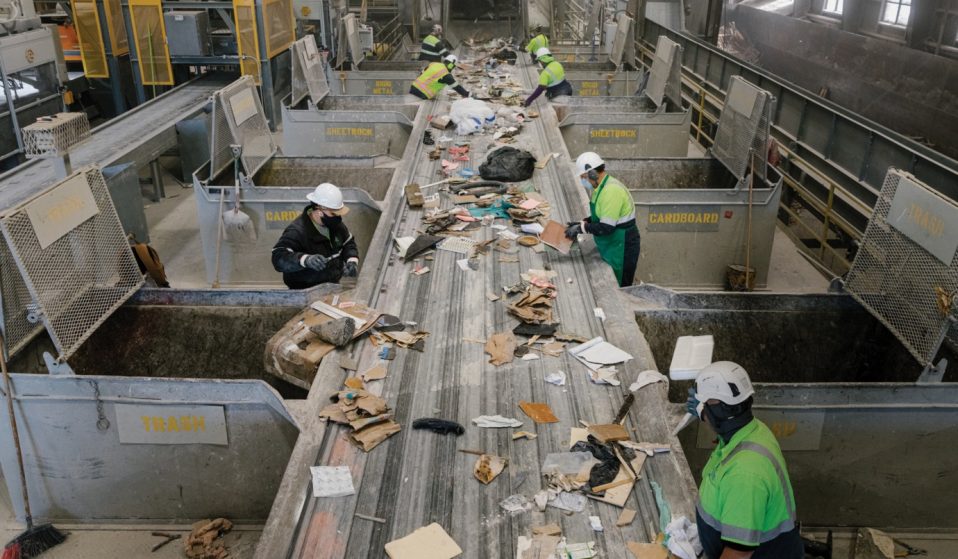 In a story taken from The Food Fight, a 2020 integrity report from Sir Kensington’s, Jess Holland speaks to the frontline workers that allow us to recycle goods.

In a story taken from The Food Fight, a 2020 integrity report from Sir Kensington’s, Jess Holland speaks to the frontline workers that allow us to recycle goods.

It was March 2020. The pandemic had just begun, and people around the world were hiding out at home, anxiously watching the news. But Aaron Meier had a job to do. Every weekday, he’d get up at 3am and head out in his truck to pick up household garbage from the streets of northwest San Francisco. This would then be taken to a 185,000-foot recycling centre run by his employers, Recology, to be sorted and sold onto manufacturers to create new products. The early start was part of a plan to reduce person-to-person contact at the dispatch office by staggering shifts.

“It’s a tough job,” Meier typed in a Twitter post that month, “from getting up pre-dawn to the physical toll it takes on my body to the monotonous nature of the job, at times it’s hard to keep on going… Right now, though, I am feeling an extra sense of pride and purpose as I do my work. I see people, my people, of my city, peeking out their windows at me. They’re scared, we’re scared. Scared but resilient.”

He continued: “It’s gonna be ok, we’re gonna make it be ok. I love my city. I love my country. I love my planet Earth. Be good to each other and we’ll get through this.” Together, the series of tweets were liked almost a million times.

I’m a garbageman, I can’t work from home and my job is an essential city service that must get done. It’s a tough job, from getting up pre-dawn to the physical toll it takes on my body to the monotonous nature of the job, at times it’s hard to keep on going.
Thread 1/3

The last year or so has given many people a renewed appreciation for all the frontline workers who keep our communities functioning, often doing tough labour and working long hours. It’s also becoming increasingly recognised that recycling is crucial, not just for the health of our cities but also for the health of our planet. This explains why Meier’s words struck a chord. Recycling wouldn’t happen without drivers like him operating in the early hours of the morning, and a small army of others who clean, sort and sell on the recycled materials.

Elizabeth Torres is another member of this workforce. Based in New Jersey, where she lives with her husband, daughter Ellie and black-and-white Shi Tzu Sol, she started working at a Materials Recovery Facility (MRF, pronounced ‘murf’) run by Sims Municipal Recycling in 2013. She’d moved to New York City from the Dominican Republic when she was 16, and had been working at her family’s bodega, and doing seasonal work with a company that created Christmas displays in stores. She was drawn to work at Sims by the steady paycheque and the opportunity to further herself. “I’m a dreamer,” she says, “and I see myself going forward. I want to lead my own facility someday.” Her favourite book, she says, is The Magic of Thinking Big by David J. Schwartz. “I read it when I was in high school, in college, and a couple of times since then.”

Torres’ first job at the facility was as a labourer: separating clear from coloured glass, as well as sweeping and wiping down equipment. The MRF is right on the New Jersey waterfront facing Brooklyn, and barges full of mixed plastic, metal and glass disgorge their contents there every day for sorting. These items would then take a journey on a series of conveyor belts, where machines would separate out the materials, using magnets, optical sensors, jets of air, and crushers that break up glass so that it can fall through small gaps. 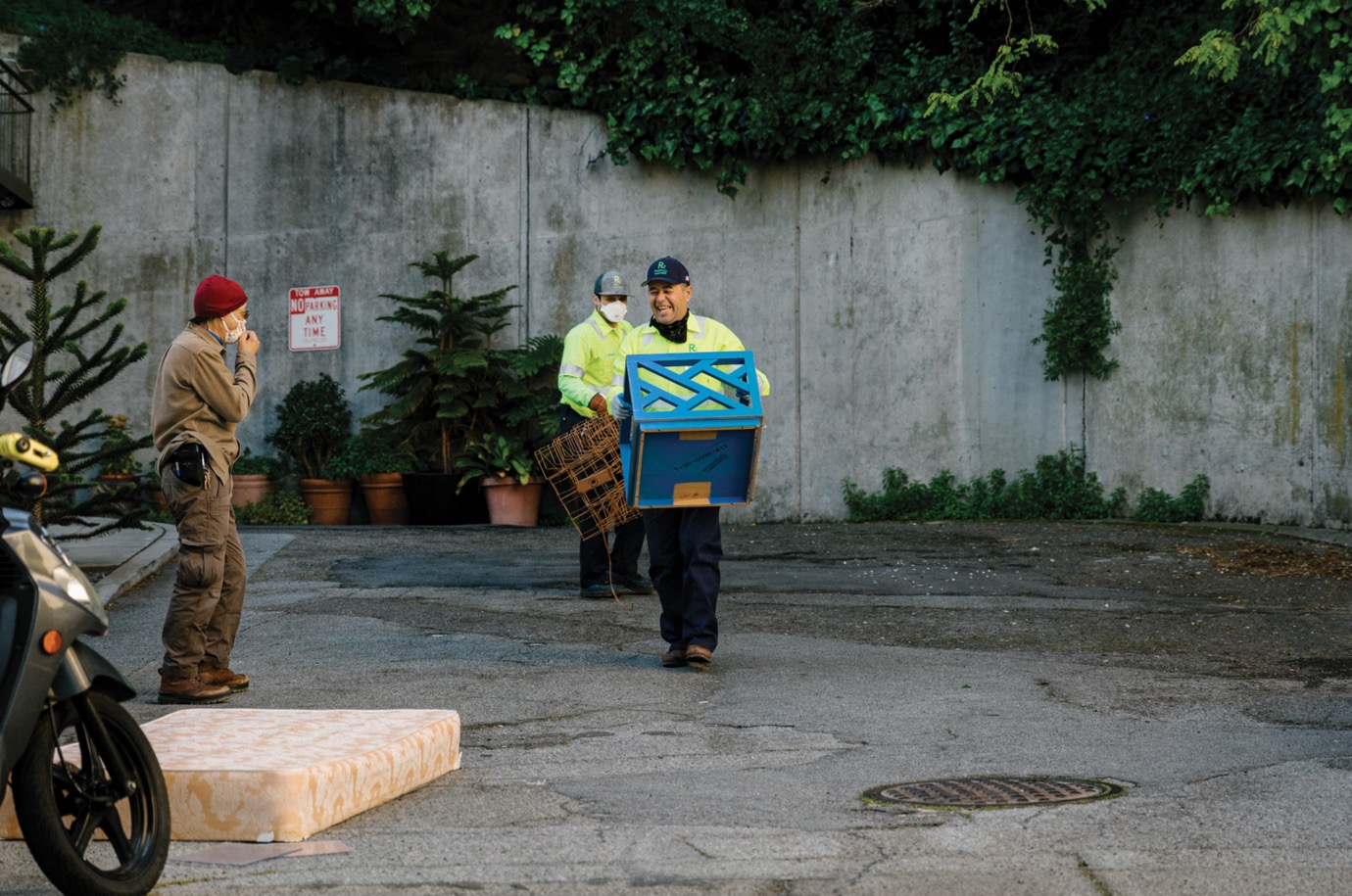 There’s something hypnotic about seeing inanimate objects do this intricate work on such a large scale, but human workers are also key at many stages of the journey. Mechanics maintain the machines, drivers operate mobile equipment, and sorters give the materials a final check before they are compressed into bales and sold on, removing any non-recyclables that had erroneously made it through the automatic sorting process.

Torres was only in this job for about seven months before she was promoted to supervisor. She’s now assistant manager of the facility, with a crew of more than 30 people, and her team have kept working through lockdowns, snowstorms: whatever comes at them. She runs the first shift, which means that she gets up at 4.30am, dropping off her daughter at daycare on the way to work, and works until 4.30pm. “We’re essential workers, and it’s been okay,” she says. “We’re very proud that we’re making a difference. Since day one, we’ve been taking all kinds of precautions, and we’ve kept on it. We haven’t stopped.”

Once materials are sorted and baled, they must then be shipped to manufacturers. Sims and Recology are private companies – ones that work in partnership with the cities they operate in – and to stay in business, they need buyers for the recycled materials they sort. All sorts of events can send shockwaves through this market. When China stopped importing recycled materials from around the world in 2018, prices dropped in the U.S. due to the surplus. Given that it’s cheaper to make new plastic and paper than to recycle them, this put even more pressure on manufacturers to choose between sustainability and cost-cutting when it came to product design and packaging. 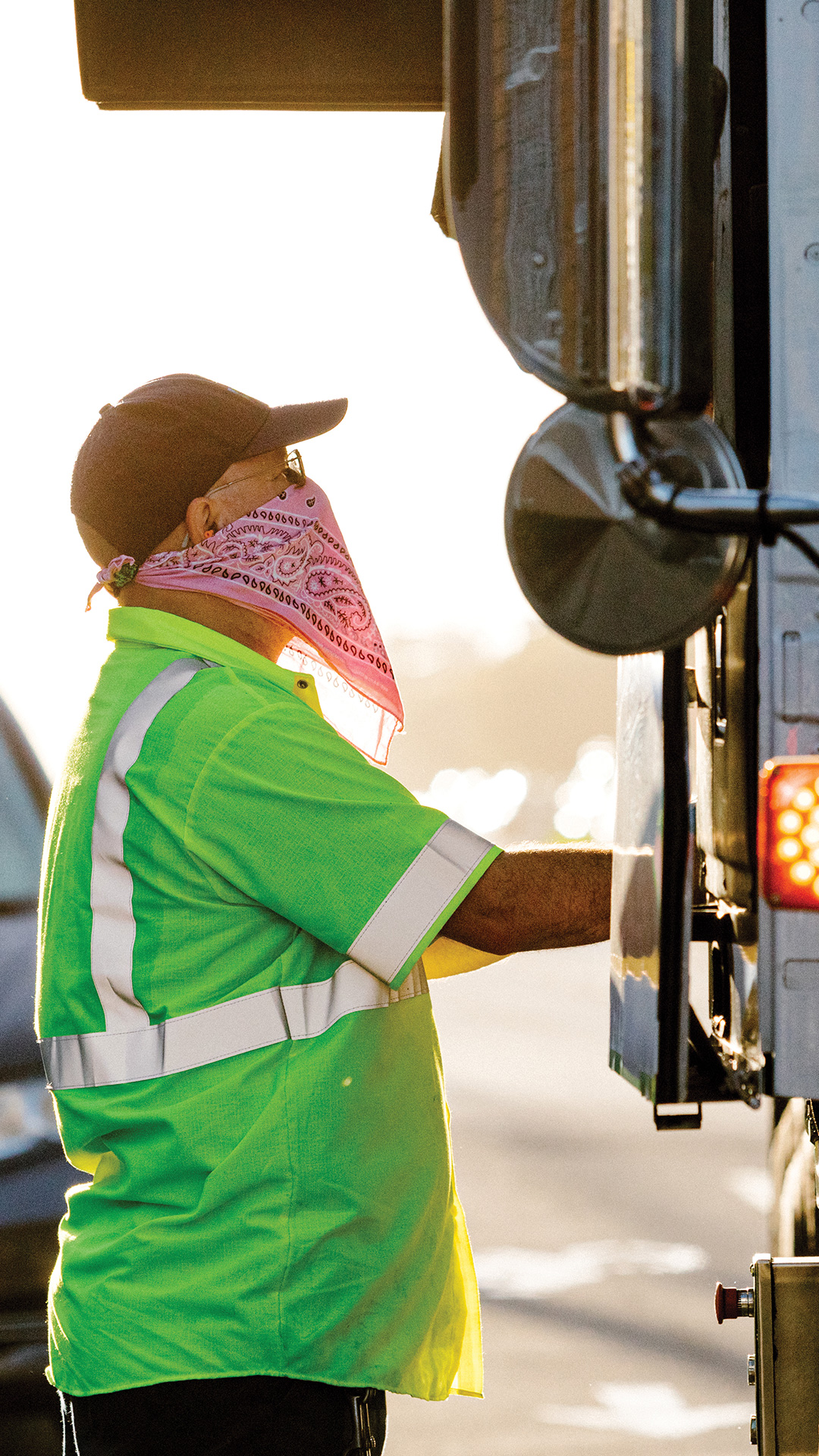 During the pandemic, however, the price of recycled paper surged again, as there were problems in the supply chain of newly manufactured paper. “It’s still higher than it was before the pandemic started,” says Kara Napolitano, Outreach and Education Coordinator at Sims. Much of the recycled paper from the Sims MRF in New York, she says, goes to the nearby Pratt Industries on Staten Island, to be turned into pizza boxes and corrugated cardboard packaging. Plastics, meanwhile, are sold on to buyers along the eastern region of North America.

There are a few different ways that consumers can do their bit for the ‘closed-loop’ economy, in which discarded products are continually re-used to make new ones. They can support companies that choose to use recycled materials in their manufacturing process. They can also help out sorters, drivers, mechanics and other people in the recycling workforce by keeping any items out of the recycling that don’t belong there. Lithium-ion batteries can be particularly dangerous to include, Napolitano says, as they can cause explosions, and long items like garden hoses and shower curtains can stop machines from running. Keeping sharps out of the trash, and rinsing out discarded items properly will also protect workers, and make their lives easier.

There’s a tendency known as “wishcycling”, Napolitano adds, that involves people putting non-recyclables in the recycling because they just seem too substantial to discard completely. It’s a possible explanation for why so many bowling bowls have turned up at the Sims MRF over the years. “Weird, right?” 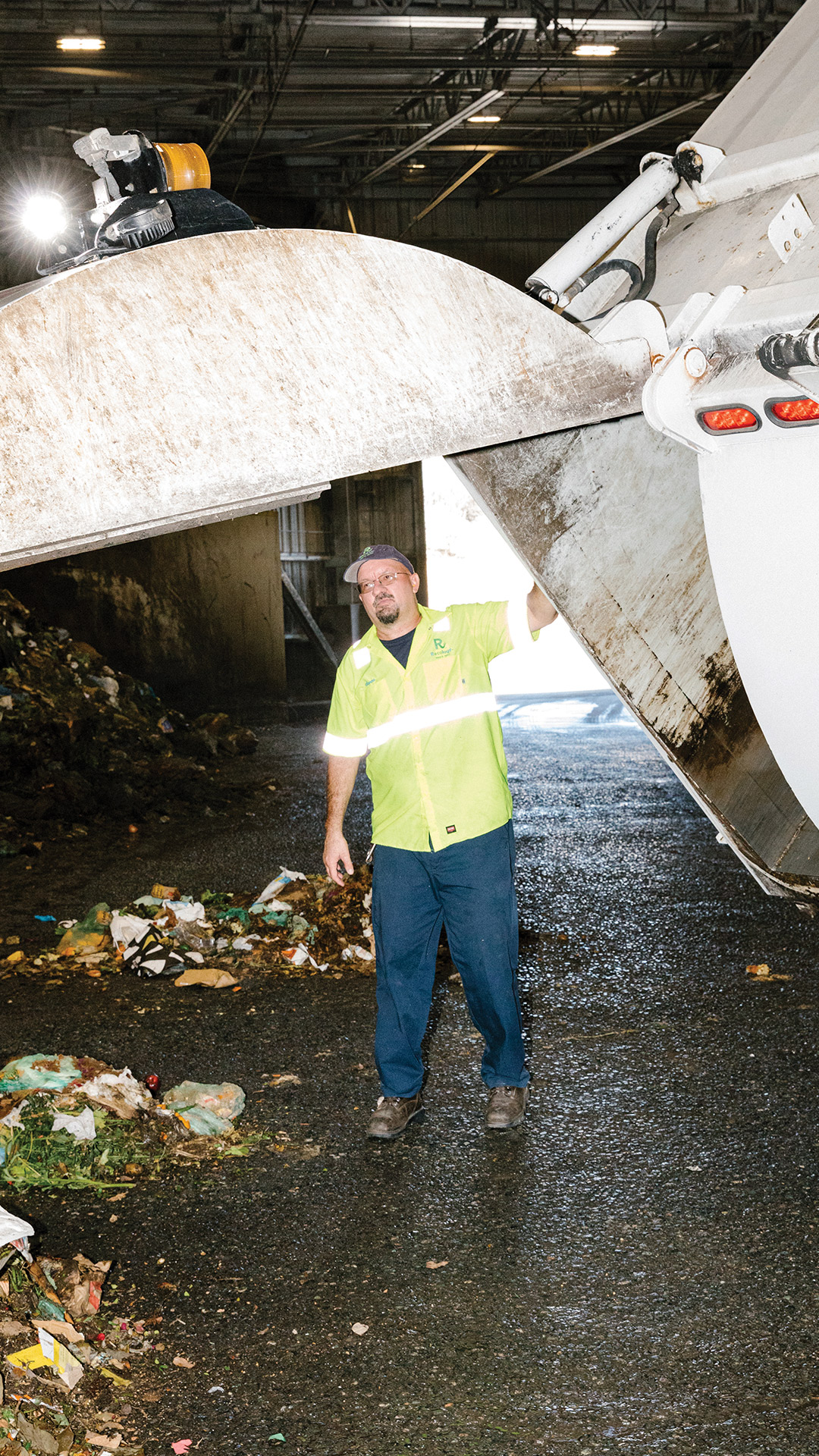 There is no national law mandating recycling in the U.S., but New York and San Francisco are two cities that do have local laws in place, and you can get ticketed for failure to properly separate your trash. It’s important to comply with these practices, but people should also understand that the recycling process itself is not carbon-neutral, especially when trash travels for long distances. Reducing consumption, buying food with less packaging, and prolonging the life of items before they are discarded: these are all important in the struggle to create a zero-waste world.

Rogelio Gutierrez is someone who has gone above and beyond to do this, not only keeping trash out of landfills but also transforming people’s lives in the process. Originally born and raised in Mexico, where he started farm work at the age of seven, he moved to the Bay Area from Guadalajara in 1987, and has spent the last 13 years working as a driver for Recology in San Francisco, specialising in picking up bulky items. As he does his rounds, he keeps his eye out for unused, broken wheelchairs that he can fix up and pass on to those in need. In just one year, he provided four wheelchairs to people ranging in age from 7 to 72 in the Mexican towns of Pacana, Cuisillos, and Tala.

Like his colleague Aaron Meier, whose tweet about his work during the pandemic went viral, Gutierrez is not only doing his job, but also helping people to see their garbage, and the workers that manage it, in a new light. “We’re invisible normally,” Meier said in 2020. “People don’t think about us unless we miss a pickup. It feels good to be seen. I’m happy to have accidentally inspired a nation to think more about the important work we are doing.” 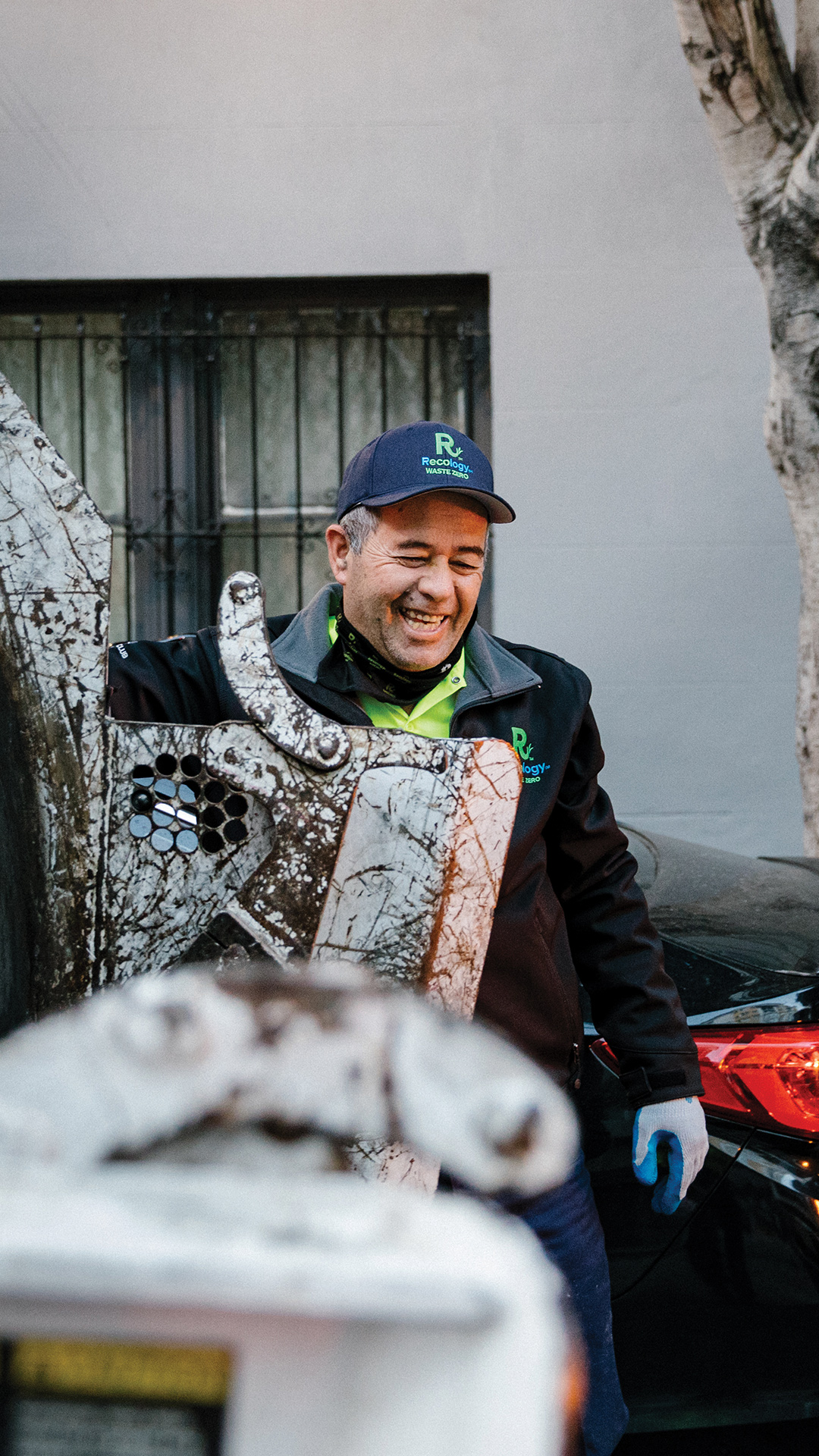 View this story and more in The Food Fight, a 2020 integrity report from Sir Kensington’s.

Linkedin
RELATED ARTICLES
OTHER ARTICLES
Photographer Becky Tyrell went down to the fading banger and stock raceway to meet a community desperate to keep it alive.
After fleeing the war in Ukraine, people are finding it impossible to secure affordable and decent housing in the UK.
David 'Dee' Delgado’s photo project is about honouring and uplifting the city of his youth, and a world rapidly disappearing under the relentless onslaught of gentrification.
A new podcast is opening up the conversation between trans women and trans amorous men in the hope of building coalitions.
Theo McInnes’s photos of the annual event provide an intriguing snapshot of contemporary Britain.
Activists and campaigners are fighting back against new laws that would seriously undermine the ability to take industrial action, calling it an attack on fundamental workers' rights.