Art & Culture / Did volunteers who flocked to Calais do more harm than good? 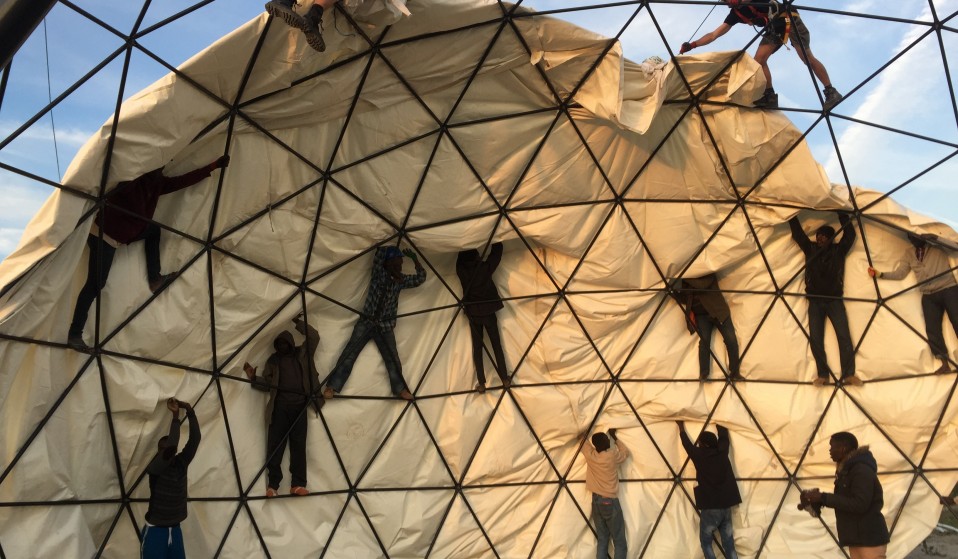 A new play opening at London's Young Vic theatre takes an honest and critical look at the well-intentioned people who volunteered in the Jungle.

A new play opening at London's Young Vic theatre takes an honest and critical look at the well-intentioned people who volunteered in the Jungle.

Joe Robertson and Joe Murphy are clearly uncomfortable when they talk about the months they spent in the Calais jungle. After finishing work on a production in Manchester back in late 2015, the pair of British writers made an impromptu trip to the French town which had become a temporary home to thousands of migrants seeking refuge in Europe. They ended up staying for seven months. It was while in Calais they set up Good Chance – a theatre company intent on creating a space for refugees at the camp to express themselves through the arts.

On a Tuesday afternoon some two years later, Robertson and Murphy are sat across from me in the press room at the National Theatre. One is fondling a telephone cable, the other has his hands clasped tight on his lap. They’re taking a break from rehearsals for their latest play – The Jungle – which they’ve written in light of their experiences at the camp. It sets out not just to highlight the awful conditions there, but to question the ethical implications of the well-intentioned foreign volunteers, like themselves, who travelled to France to try and help. They find it tougher to discuss these questions away from the stage.

When Robertson, for example, explains the role that Good Chance played in Calais, he stops himself halfway through. “I think we provided a platform where that could…” he nervously laughs. “I’m not blowing smoke up my own arse, I’m just saying. I think we made a platform where people could come and actually utilise what they do.”

And when Murphy recalls the toll that the conditions in the camp took on him personally, he’s careful not to sound crass. “It would be disingenuous to say that it wasn’t tiring,” he says. “But of course, there are greater problems than us being tired.”

Makeshift refugee camps have existed in Calais since the late 1990s. But when the crisis in Europe intensified at the start of 2015, “the jungle” quickly became a focal point for an emerging cataclysm. As a Guardian report at the time put it, a scrub of land between a chemical factory and a motorway, with around 6000 people living in horrific conditions, became “France’s first official, state-sanctioned migrant slum.”

The French authorities were accused of acting inhumanely in their response to refugees’ attempts to cross the English Channel; far-right groups gathered on the Jungle’s  borders to threaten and beat its residents. And, as news spread in the UK, volunteers travelled to the port town to offer help to the refugees.

A study at the time found that conditions in the Calais camp were miserable. Inhabitants were suffering from tuberculosis, scabies, and post-traumatic stress; water sources were contaminated; there was one shower for every 75 residents. Conditions in the camp fell below the UNHCR’s standards for refugee camps. But the UNHCR wasn’t present. Neither they nor the Red Cross were invited by the French government.

“It was cold and horrible and the conditions were terrible,” Robertson says. But those living there persisted. “They were already building shops and restaurants and barber shops. The kind of structures of a proto-society. They were creating things to help and allow them to get by and to help them survive in this horrible place.”

The atmosphere in the camp was not entirely as they expected. Murphy and Robertson assumed that survival would be the beginning and end of everything. Instead, Murphy says, things were lively. “We found people who just wanted to talk and wanted to sing and wanted to dance – all these different cultures and traditions. And so we came away from having spent our first week there just meeting loads of people. And we thought, ‘let’s build a place where lots of people can continue to talk and sing and make things.’”

That was the start of the Good Chance Theatre, an 11-metre diameter geodesic dome inside the jungle that ran from 10am to midnight; offering everything from creative workshops to Kung-fu classes to stand-up comedy sets (translated between dozens of languages at a time). It was, Murphy says, “constantly full of just the greatest variety of activity and art and expression you could possibly imagine.” Murphy and Robertson called everyone they could back in the UK to ask for help. Assistance came in from the Young Vic, National Theatre, and Royal Court, and more volunteers who came to help in Calais.

“I think artists are often the first people who think to go to places, but there’s not an idea, a universal idea, that art has a role in humanitarian crises,” Robertson says. “Obviously you need food, you need shelter, you need water, you need these basic things to survive. But almost immediately after you have those things, you need a place to express yourself, to feel like you’ve held on to your identity in some way. Because otherwise you’re just eating and queueing and doing all these necessary things day by day, and you cannot be a person.”

In their first month in Calais, the two slept in a British army tent that Robertson describes as “the worst tent in the jungle.” He came down with a bacterial disease and stayed in hospital for 10 days. After a few weeks, they rented a caravan a mile away and commuted into the jungle instead.

Over the next nine months, Good Chance thrived. But Murphy and Robertson still didn’t seriously consider turning the experience into a play back in England. The turning point, and the moral core of the production, came a few months in. “When we first arrived, we were welcomed because we were from the UK, and the UK [was seen as] the greatest place in the world,” Murphy says. “After a while, many months, we started to hear for the first time, “Fuck the UK.” Because the depression had sunk in. It was deep, deep into winter. And I can’t emphasise quite how cold and muddy and impossible the conditions were.”

Murphy and Robertson wrote that into the play. They wanted The Jungle to consider the implications of volunteer assistance in Calais and the migrant crisis more broadly. “I think it would be simplifying if we were to present a clear, definitive representation that was politically one-sided that didn’t ask questions,” Murphy says. “Like, did the fact that loads of people went over and set up these places to help – did that preserve this jungle? Did it in a way not help? Would the government have had to intervene much earlier if people hadn’t have gone to help? We can’t write a play that doesn’t ask that question. We don’t want to present something that is singular.”

Robertson wants to build that out further. “I think we’ve tried to even go beyond that and use the jungle as a way of talking about how people live together,” he says, “because I think that’s the big challenge of our time is how we’re going to learn how to live side-by-side and get along. We call it integration, but it’s really tough and it’s really hard… I think we saw in the jungle all of these people from so many different places living together and how hard that was. But also, how people tried to find ways through. I think there are lots of parallels between what Britain’s doing now, and what happened there. So I think we’ve tried to explore that. I think so.”

“I think so as well,” Murphy says, only slightly nervously.

Linkedin
RELATED ARTICLES
OTHER ARTICLES
A 37-year-old woman shares how her abortion led her to become a clinic worker, and the abuse she’s received in that role.
A group of young Palestinians have found temporary freedom in the act of parkour, reimagining wreckage and ruins as a series of high-octane playgrounds.
Cindy Campbell recounts how her brother ushered in a new era of musical culture at a party she held in the Bronx in ‘70s.
With skyrocketing rents, packed out viewings, bidding wars and more, renting in London has never been harder.
The two-day long event returned to London this year, showcasing a spectacular parade, steel bands and Caribbean food.
Birdy Chu reflects on documenting the historic moment in which the territory was formally passed back from the UK to China.