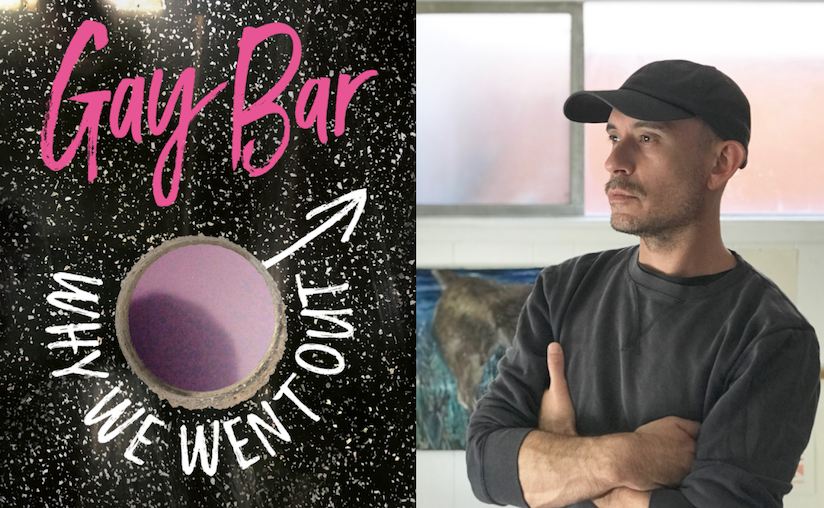 Around the world, LGBTQ+ bars are closing. In a new book, writer Jeremy Atherton Lin reclaims these institutions from the rubble by tracing their legacy as spaces of solidarity and sexual expression.

Around the world, LGBTQ+ bars are closing. In a new book, writer Jeremy Atherton Lin reclaims these institutions from the rubble by tracing their legacy as spaces of solidarity and sexual expression.

“Every generation feels like they’re late to the party,” laughs Jeremy Atherton Lin, speaking over Zoom in London. “You never feel that your moment could be historical. When you’re young, you just have FOMO all the time. I think that’s even more real now in lockdown.”

Lin is discussing his new non-fiction book, Gay Bar: Why We Went Out, a book that on one hand recounts Lin’s personal journey in gay bars across the Atlanic (raised in California, he now lives in London), and on the other, wrestles with the legacy of the gay bar, as a community space fillled with pleasure, confusion and colliding identities.

Gay Bar’s release feels bittersweet, published at a time when most of us haven’t stepped foot in a nightclub or bar for nearly a year. The book captures exactly why we need nights out: to cautiously explore our identities or openly embrace them; to feel secure within our communities or just have a drink and a dance with the hope of getting lucky.

From 18th-century cruising spots in London, to post-AIDs crisis nightclubs, to the supposed recent death of the gay bar, Lin’s book is a meandering, vibrant journey through the social history of the restless, vital and perhaps fading LGBTQ+ institution. Speaking to Huck, Atherton Lin discusses publishing Gay Bar during lockdown, why queer history resists a grand narrative and what the loss of the gay bars means for a community.

Congratulations on Gay Bar! It must be strange releasing a book, especially one about bars, during lockdown. How’s that been?

It has been strange! I have a different answer depending on the day of the week, but I think my relationship with the book is more on its broader historical scope at the moment.

I’ve been making playlists for the book and have been adding so much disco! It’s not really my genre of music but more historical. It’s taken me by surprise but I think maybe because there’s been a collective trauma with Covid, it puts things into perspective and you look to the past.

Why was the gay bar something you wanted to tackle?

To me, the title Gay Bar feels like a really small title. I always think about that Frank Ocean song that mentions being taken to a gay bar and it’s this sort of off-hand, outdated space. It’s a space that some of us are a regular at and for others, it comes in and out of our lives. I think I’ve always thought about the book as my experience with the gay bar, but now, for some reason, the title feels so big! People are approaching me and saying, you’ve written a definitive cultural history.

I’m like, please no! Don’t put that pressure on me! It’s not any different than Maggie Nelson writing about blue and it could be about blue in a million ways, but she wrote it in her way.

The book looks at the history of the gay bar but very much through your history. Why did you decide on that structure and not, say, a more objective history?

It’s a personal book because that’s just how I write, but I also don’t believe there’s any one gay bar grand narrative – or even a first gay bar! There’s one that people say was the first one in Paris in the end of the 1800s, or in Copenhagen, or in London but I think that stuff is unquantifiable. It made more sense to me to come to the book from the bars I’ve frequented or live nearby. When I did that, I began realising that they each represent a different thing.

When the book was originally conceived, so many gay bars were closing – it was in the news all the time. By 2017, London had lost half of its bars within 10 years. The presumption was that it was a shame, that gay bars are a monument for gay rights and gay identity. I have a continually conflicted relationship with inhabiting that identity, like so many people do with identities that apply to them or that are applied to them.

You see that gay identity materialise in the form of these bars and when you see them closing, it triggers this thought: what is this identity that I supposedly belong to and how do I feel about the fact that its markers across the city are closing? I didn’t set out to rescue the gay bar but to question from one person’s perspective what they meant to be and how I perceive them.

Gay bars are closing for different reasons, like gentrification, but the book wrestles with a tricky thought: are gay bars closing because they aren’t needed anymore because society is becoming more tolerant?

Yeah, it’s like you’re losing something when you’re gaining something. It’s difficult territory because you don’t want to romanticise your oppression but at the same time the context of being marginalised yields codes and ways of communicating amongst communities. Sometimes it can feel like if you’ve been locked out of something – in this case, a more accepted population and facet of society – then perhaps, that can actually lead you to feel like you’re in something else. A community. That has its moments of joy and camaraderie and even a thrill of the unacceptability of that.

There’s a great line in the book from Ben Walters: “The queer archive is fragile from fear and forgetting, too often written in whispers and saved in scraps.” Is that an accurate description of how you found researching gay history?

Everyone remembers that line and it’s actually from a listings application! I think a couple of different things: first, that it becomes fun because it’s an investigation if there’s not an official history. I also don’t think the result is to create an official history.

When there isn’t a grand narrative you do a lot of work piecing together things like listings applications, police reports, legal opinions from court cases and oral histories. All that stuff becomes a real adventure. It also gives you permission to lean into the mythologies a little bit and let the objective historical truth remain in question. For example, I would come across different accounts of a bar raid and have to choose my way through these slightly different versions of what happened on that one night.

And then this book is also about bars! Your memory should be a bit foggy and a bit of a blur and sloppy. The writing itself should slur its words itself. I wanted there to be a feeling of looking around a room and entertaining thoughts rather than committing to a firm stance.

You’re very open about “presenting gayness” and the level of performativity that happens in gay bars, like any social space.

And that’s further complicated by every intersection of my identity. I’m mixed-race, my father’s an immigrant, I’m an immigrant. It’s been a bit of a process trying to figure out how not to be what other people want me to be in a given context. Like in a Chinese household, I’m at once more or less Chinese, or in an English workplace, I read the room and adapt.

There are two bars in the book called The Black Cat – one in San Francisco and one in LA. There’s an urban myth that black cats have evolved to be friendly, amenable creatures because they have this reputation of being bad luck.

I’ve toyed with this metaphor of feeling like a black cat and trying to compensate for all the things I feel people might be hostile towards that are just social constructs about my identity. I didn’t go there in the book because I didn’t want to commit to the idea that all gay men are black cats who are trying to make everyone like them. But it does feel true to me sometimes, especially in the book when I talk about feeling real or feeling seen. Your identity is as much about how you’re perceived as it is about how you hope to be perceived.

This interview has been edited and condensed for clarity.

Gay Bar is published by Granta on March 4.

Linkedin
RELATED ARTICLES
OTHER ARTICLES
Activists and campaigners are fighting back against new laws that would seriously undermine the ability to take industrial action, calling it an attack on fundamental workers' rights.
A new law change is enabling Britain’s donor-conceived children to know the truth about their origins – but campaigners say the fertility industry must do more to protect people.
Jeffrey Henson Scales intimate portraits and protest images of the BPP and its leaders offer a rare insight into organisation at a time of societal upheaval.
After building his reputation covering the US civil rights movement in the 1960s, the photographer went on to produce some of the most enduring images of the past century.
After a two-year hiatus and a new album, the Nigerian artist is riding high. Now, he wants to bring his alternative, genre-bending sound to the world.
Mass crustacean die-offs in the North East have led a community of fishermen to take action to save their seas.