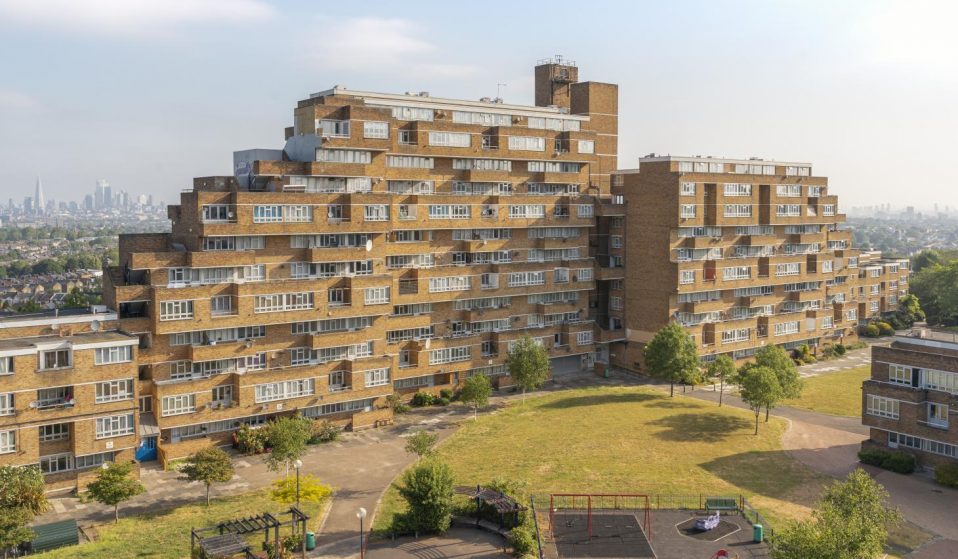 A new book featuring portraits of 68 of the capital’s most revered council house schemes recasts these buildings in a new light.

From Brutalist blocks to Modernist towers, Jack Young’s new book featuring portraits of 68 of the capital’s most revered council house schemes recasts these buildings in a new light.

From Tower Bridge to the Shard, London hosts a wealth of world-famous architecture. But while much has been written about these grandiose designs, the buildings that sit in their shadows are rarely celebrated.

By celebrating an overlooked area of British architecture, this is where Jack Young’s new book, The Council House, attempts to draw our attention. The book, which comprises photos of 68 council estates across the capital, along with historical details and conversations with residents, shows why these often-maligned buildings remain integral to the city’s identity.

“Council houses make up London’s architectural DNA just like places like Buckingham Palace and Big Ben,” says Young. “It’s all London. And these buildings also have architectural clout and history.” 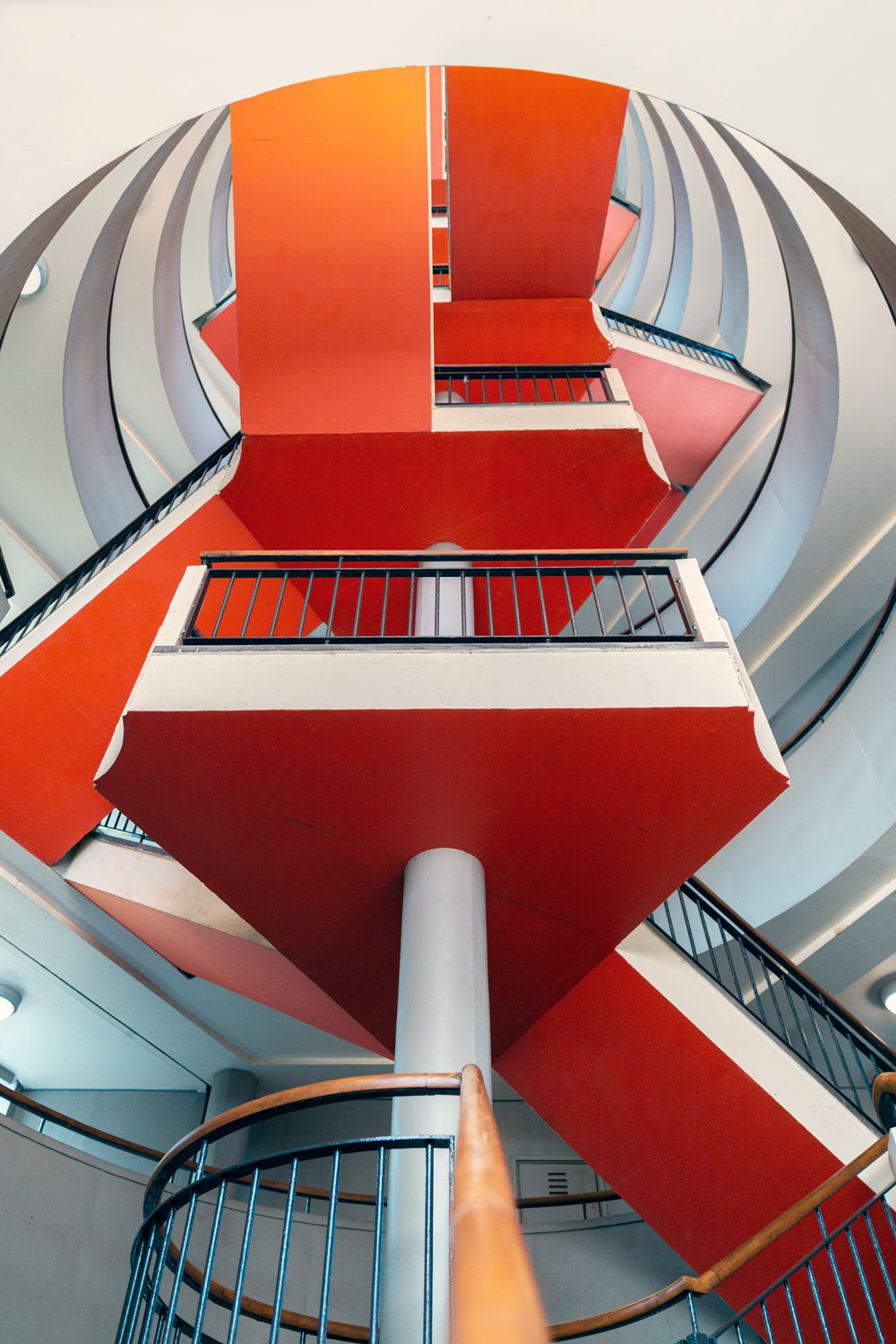 Seen through Young’s lens, buildings that may initially seem mundane become strange and new. His photos highlight quirks we might otherwise miss, such as a towering art wall on Tower Hamlets’ Thornfield House, or rare Grade II listed play equipment in the long, meandering slide outside Westminster’s Brunel Estate.

The photographs that form The Council House are bold and bright, the buildings shot against clear blue skies or lambent golden-hour glows. This is no accident. As Young explains: “A lot of estates are pictured in television dramas and become these gritty backdrops. What I try to do with photography is flip that, and photograph these estates so they look their best, so they can shine and be celebrated.” 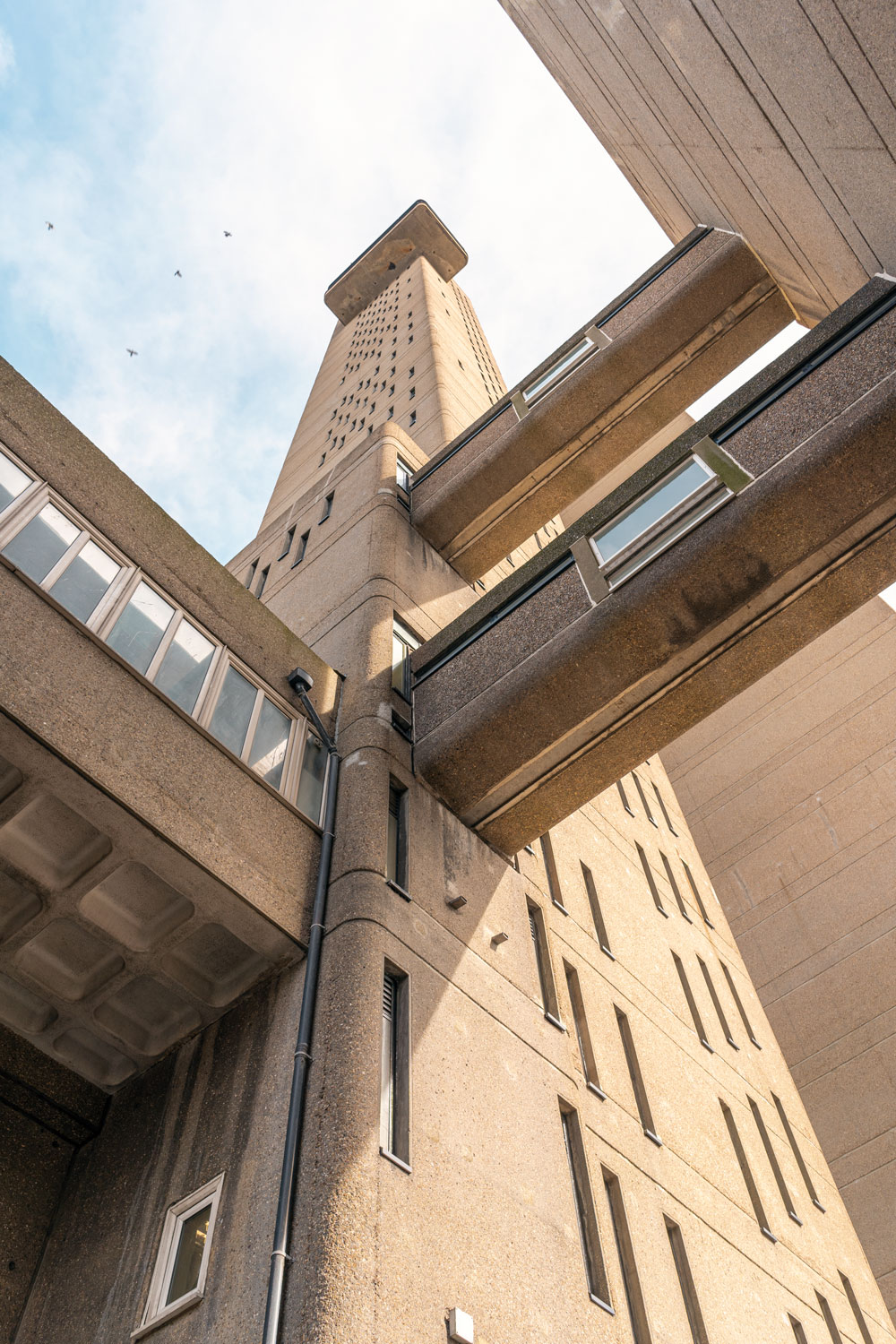 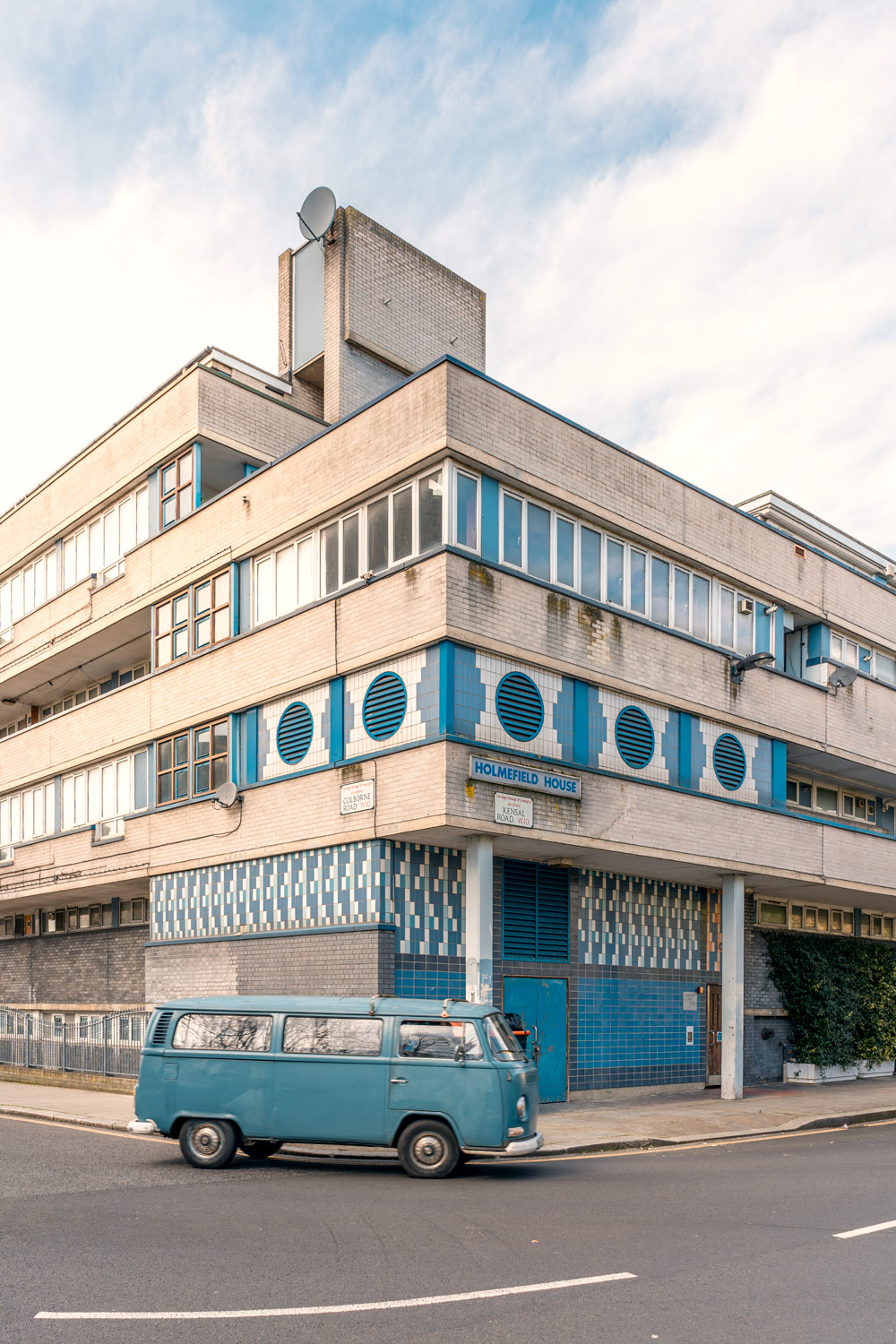 Often used as media shorthand for crime or poverty, when removed from this spurious context, the architectural prowess of these buildings becomes clear. Kensal Green’s Trellick Tower, for example, once dubbed the ‘Tower of Terror’ by tabloids, looks radiant in the sun, its vibrant primary colour interior a joyful reprieve from the chalky white of many communal stairwells.

Young’s photos suggest a utopia of council housing. It’s a million miles from the realities facing many tenants today, where issues such as mould, overcrowding and disrepair are commonplace. Emblematic of this was the devastating Grenfell Tower fire, which highlighted the lethal consequences of local authorities cutting corners and failing the communities they’re entrusted to keep safe. 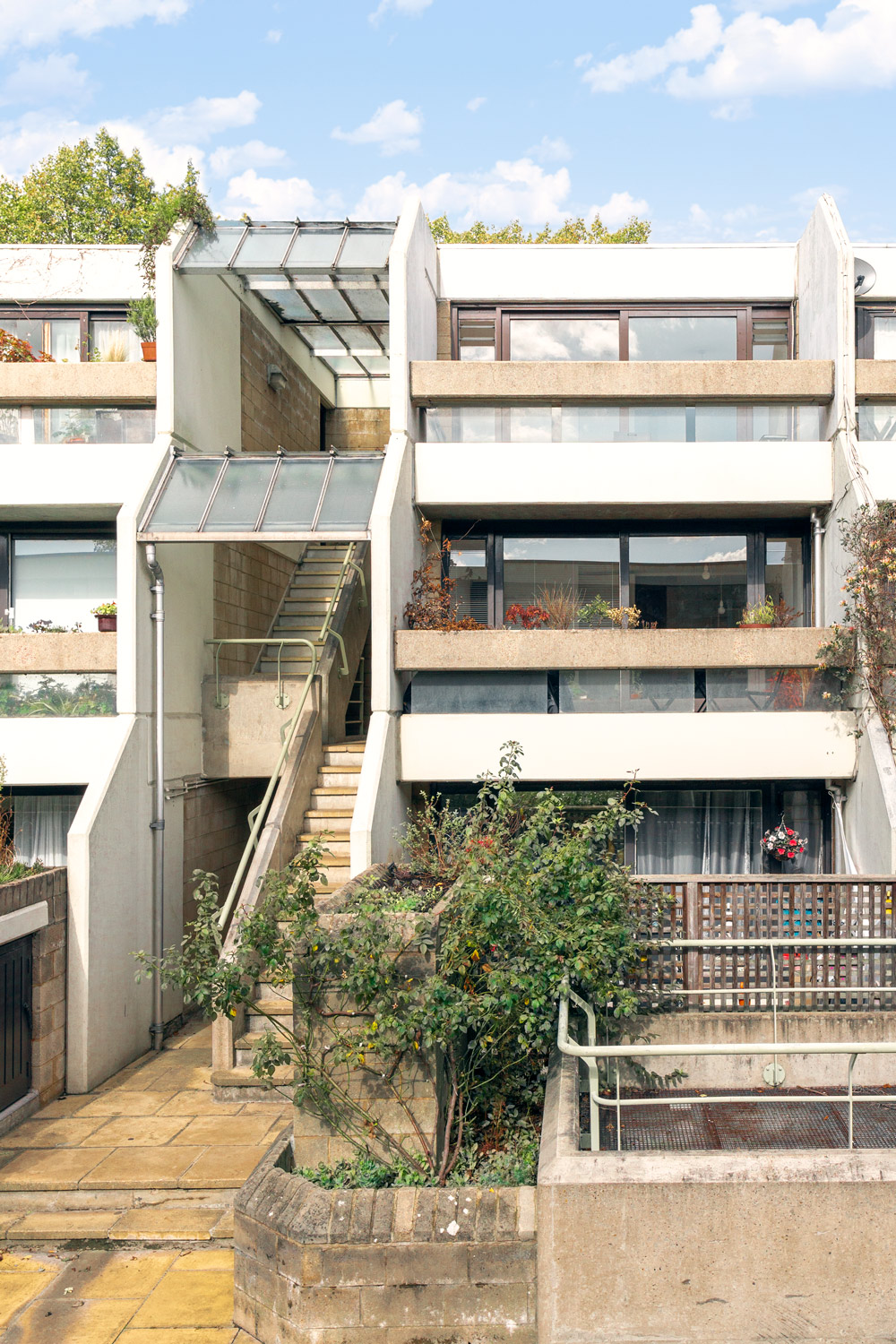 Young’s book is not so much an attempt to plaster over the ugly truth of London’s housing stock as it is a vision of its potential. The majority of the buildings he spotlights were built in the ’60s and ’70’s when top architects were enlisted to construct large numbers of council houses across the city. From the unabashed brutalism of the South Kilburn Estate to the Mediterranean inspired Spedan Close in Hampstead, the resulting designs were both vastly different and wildly innovative.

This is precisely why Young finds the post-war period most significant. “The buildings that come from that era have this slightly odd, wacky, intriguing presence to them,” he says. “My initial assumption was that these buildings were being built to house the people most in need and were being thrown up quickly after the war. Why were they not all using these cookie cutter templates? They were all so different. The more I discovered different estates and their different personalities, I would want to find the next one and see what was out there.”

“My absolute favourite estate is Dawson’s Heights by Kate Macintosh in East Dulwich,” he says. “It’s this very sculptural estate on top of a tall hill that overlooks the city. It feels like this shrine to council housing sat on this hill; it really puts it on a pedestal. Kate Macintosh managed to justify each flat having its own balcony – which is an extravagance when you think about council housing in the post-war years – by the fact the balconies doubled up as fire escapes.”

While the project began as a study in design, Young also talks to residents to explore the estates’ human impact. “Looking at it from a much more human perspective has been a real eye-opener,” he says. “One thing that really stood out to me was the pride the residents had in these estates and how willing they were to talk about them.”

In the residents, Young found people who shared his enthusiasm for the estates’ unique and compelling designs, with one tenant of Bethnal Green’s Cranbrook Estate lovingly describing her building as “a green oasis in a sea of identical, grey cardboard-box homes”. 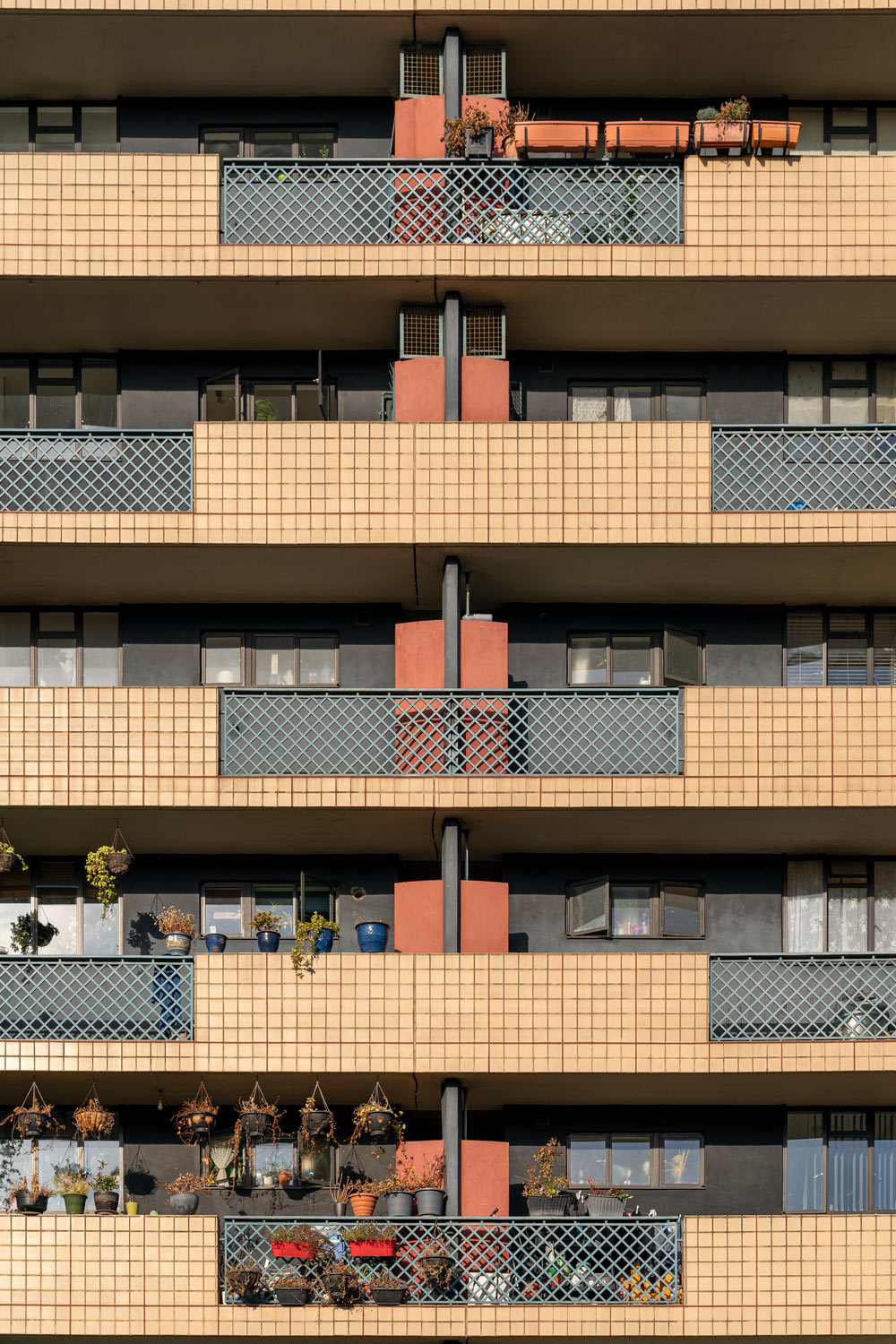 Pride is integral to the book. The Council House is a celebration of a type of housing that has fallen out of favour in recent years due to media stereotyping, negative press coverage and – in some cases – the poor upkeep of the buildings themselves.

“What I’m hoping – without sounding too pompous – is that by highlighting the beauty in these estates we can change some of the perceptions that are held towards them,” Young says.

“They have architectural merit and interest,” he adds. “It’s about showing that these places are beautiful.” 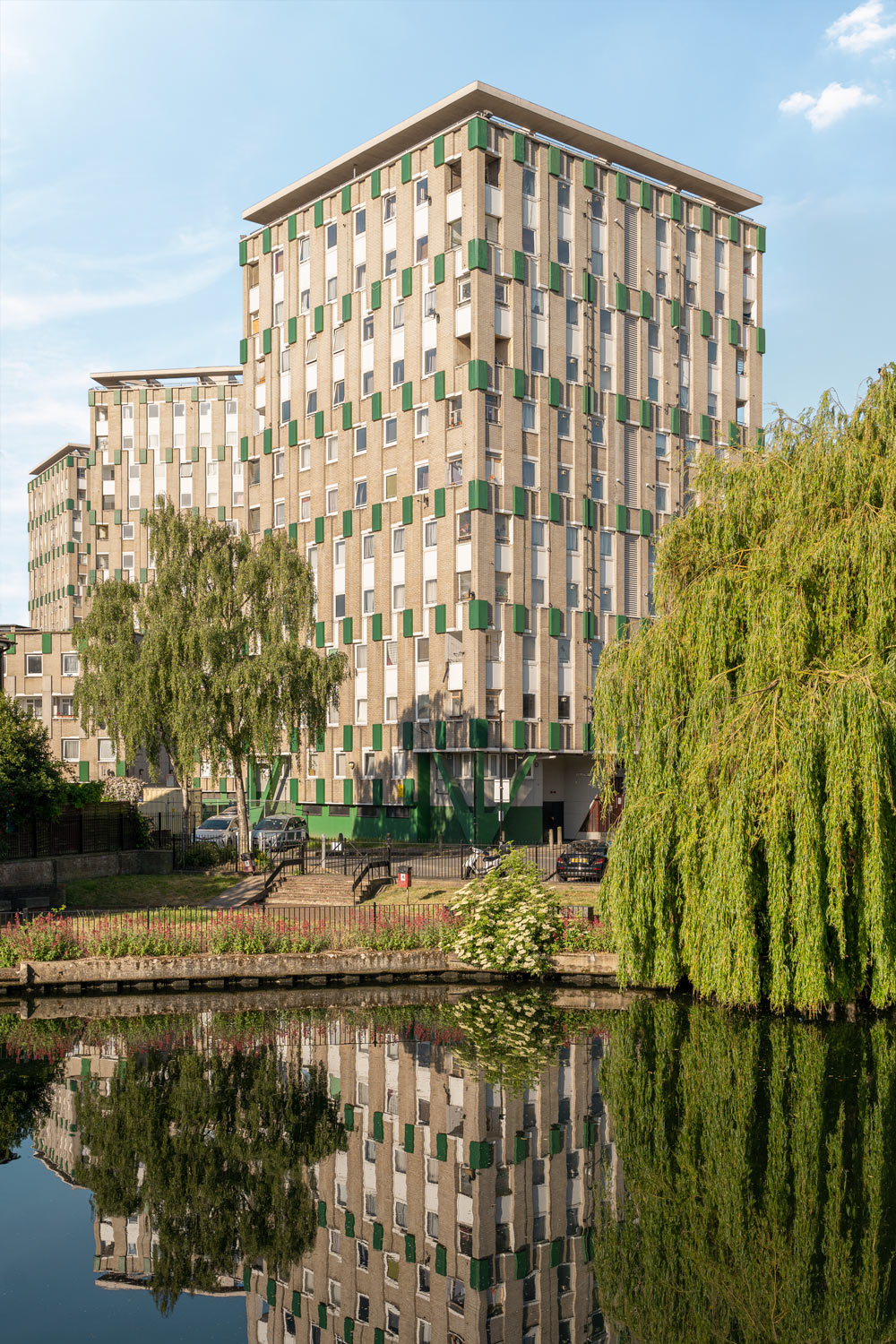 The Council House is available on Hoxton Mini Press.

Linkedin
RELATED ARTICLES
OTHER ARTICLES
Photographer Matthew Brookes recalls following a group of young people in Venice Beach living in search of the perfect wave.
Finland-born photographer Sirkka-Liisa Konttinen looks back on her decades-long documentation of life in Northern England.
Freddie Miller’s new series of photographs investigates who today’s trainspotters are and what drives their unfettered enthusiasm.
Curator Antoine de Beaupré discusses his immense record collection and what it tells us about the intersection of music, photography, art, and commerce.
Photographer David Hoffman recalls documenting the extreme wealth inequality around Tower Hamlets and Hackney int the 1980s.
Whether it's partygate, the climate crisis or the spiralling cost of living, the fightback begins on the picket lines writes Tommy Vickerstaff