Art & Culture / The photographers capturing the chaos of hardcore music 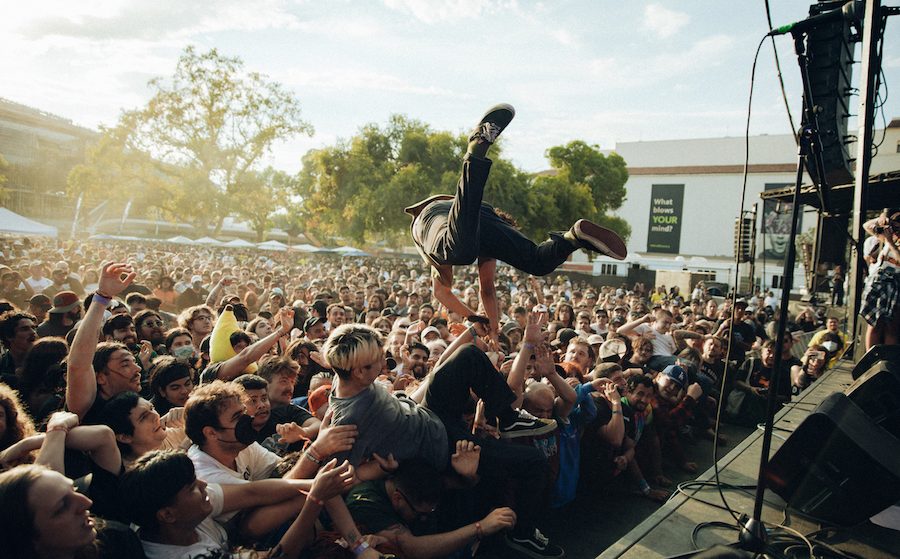 From bleeding noses to crowd surfing, three image-makers reflect on capturing the scene in all its wild glory.

From bleeding noses to crowd surfing, three image-makers reflect on capturing the scene in all its wild glory.

The empty space between the barrier and the stage only stretches a few feet, but it says a lot about the perceived differences between an artist and their audience – or in many cases, a star and their fans. Hardcore shows have, at their most honest, always been a rejection of this power dynamic.

“The magic of it is the interaction between the band and the crowd, where the two come together,” photographer Angela Owens says. “It’s beautiful. That’s where the passion and the energy is.”

Hardcore sprang to life in the US at the tail end of the 1970s as increasingly played-out punk scenes were overtaken by music that was faster, grimier, and often based around an egalitarian, all-in, DIY spirit. It tore through famous venues such as CBGB in New York and suburban American Legion halls alike, with the pogoing that greeted the Ramones replaced by gnarly pits that were rage-filled communal happenings. 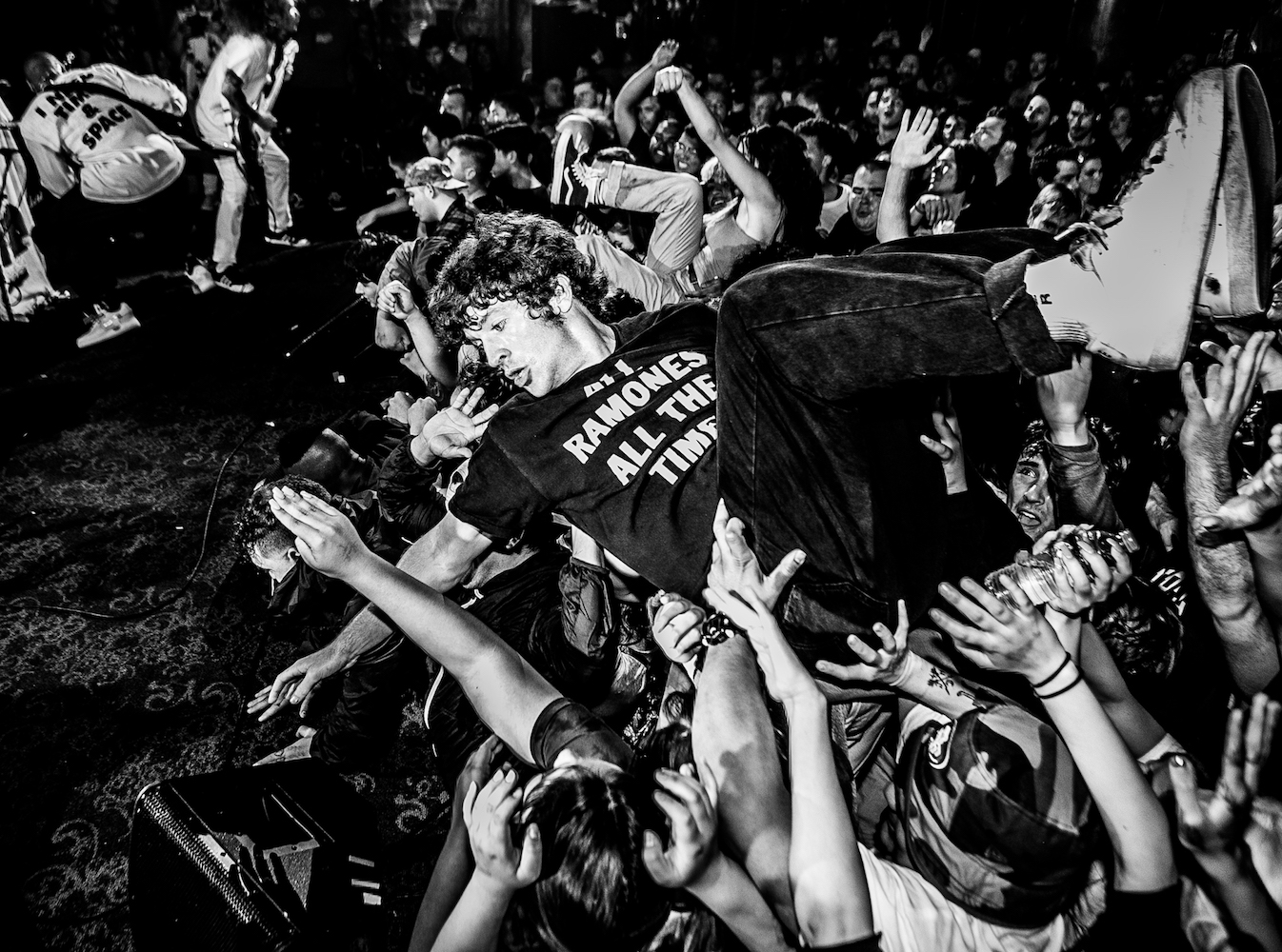 Having experienced stylistic retrofits, periods of stagnation, and wild creative explosions in the ensuing decades, in 2022, hardcore is in an exciting place. Riding the crossover success of Baltimore natives Turnstile, plus the buzz generated by bands such as Gulch, Scowl and Drain in the Bay Area, Soul Glo in Philadelphia, and the restlessly creative Convulse Records stable out of Denver, these days, hardcore is something you can read about in the New York Times once you’re done two-stepping.

When talking about this current moment, it’s impossible to ignore the role played by the yawning silences of the pandemic, which made the pit seem like an aspirational ideal. Photography has always been a core tenet of hardcore’s appeal: as a visual discipline, shooting shows squares the physicality of sports with the frenetic nature of a street fight, and the results have long been poured over by fans. But during rolling Covid lockdowns, social media caught fire with images and videos of past shows, their self-contained mayhem made all the more visceral by our shared existence at the other extreme. 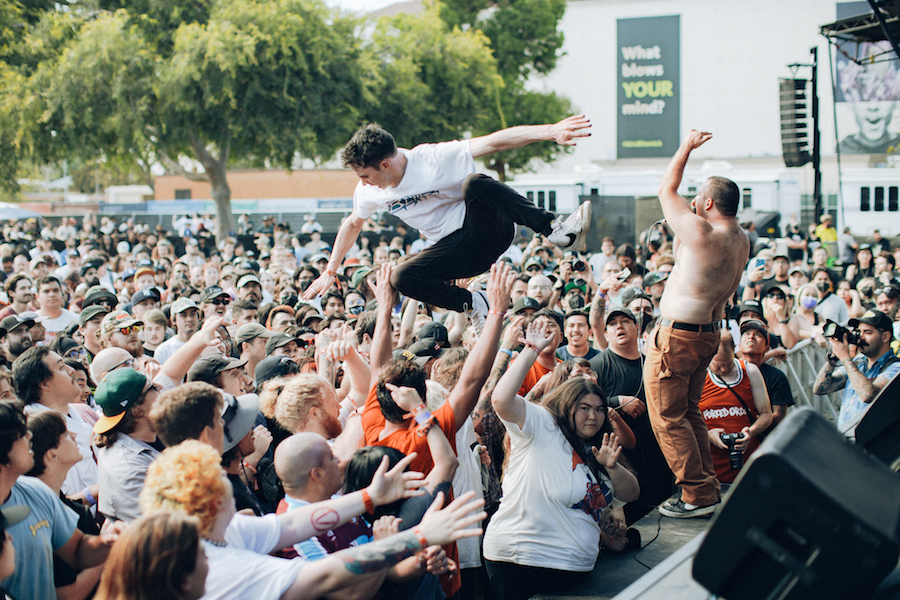 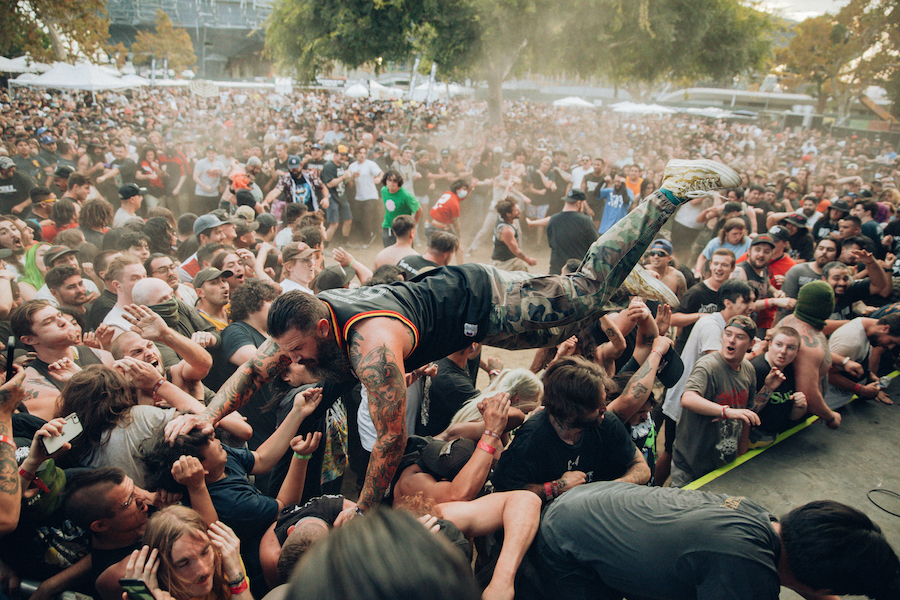 “We spent so much time alone during the pandemic,” observes Alex Henery, who in addition to his work as a photographer, plays guitar in Fiddlehead alongside members of the legendary band, Have Heart. “People are posting pictures from shows, and that’s the complete opposite. It’s people on top of each other, people sharing the microphone, singing in each other’s faces. I think those images are so powerful as a contrast. At one point it seemed like maybe we’d never do that again.”

For bands, the situation was often the same. Many released records into a vacuum, while others mulled over what their purpose was if they couldn’t play live. ​​Josef Alfonso – vocalist with San Jose beatdown specialists Sunami – knows that feeling all too well. His group put out a self-titled EP and split seven inch with Gulch at the height of Covid. When they suited up for a now legendary show dubbed Real Bay Shit in the summer of 2021, Gabe Becerra’s shots of the parking lot takeover became indelible online. 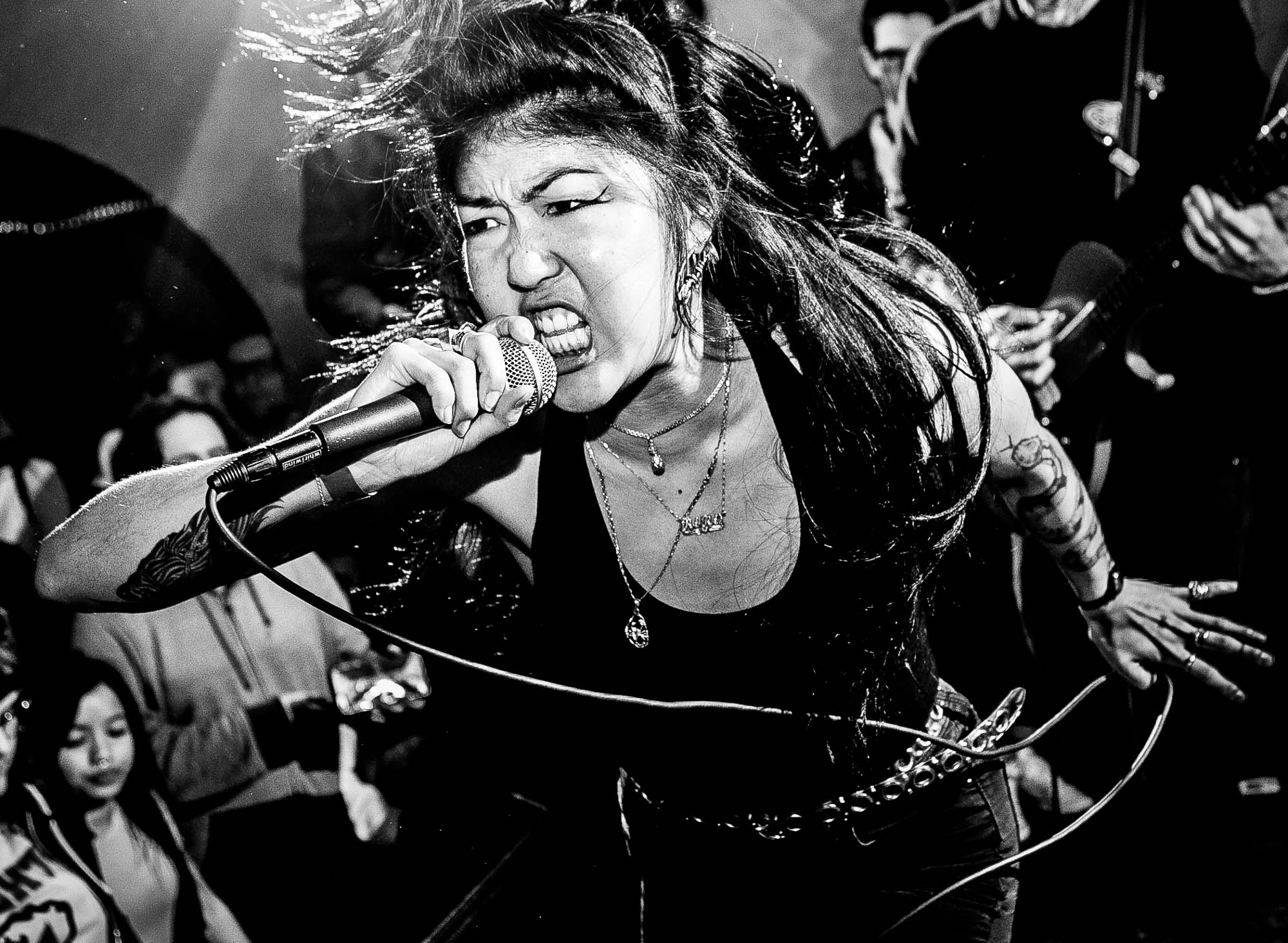 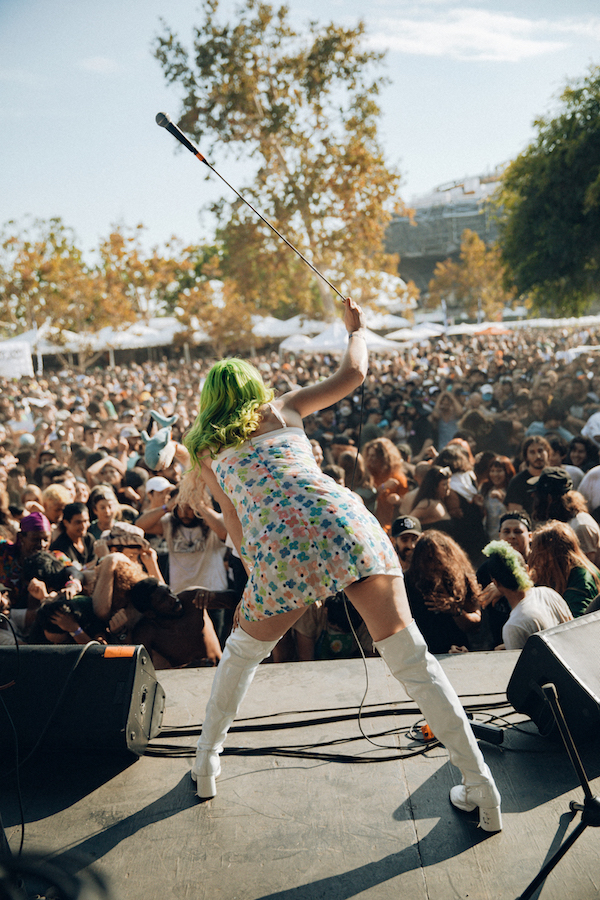 “The pandemic made us all nostalgic to see and feel the energy of live music, and a great photo can capture that feeling,” Alfonso says. “In some photos, you can just tell that something special has happened, whether it’s the band or just the vibe of the venue. A great photo can tell the story, or at least make the viewer imagine how great a band or show is.”

Bringing to life the chaos of the stage in a 2D image is not always easy. Photographing hardcore bands is an exercise in plate-spinning, with the musicians on stage just one element that needs to be considered. The pit – which often stretches from the front of a venue to the back – is a living, breathing element of any photo. After over 15 years in the game, Rebecca Lader has honed an approach that mixes spontaneity with a deep understanding of the mechanics behind a great shot. Her work is particularly striking in its ability to render the feeling of movement. “Part of me kind of blacks out,” she says with a laugh.

“I’m just like: keep going, keep going, keep going, just keep shooting and be in the zone. I get tunnel vision. But then another aspect of it is framing, shooting a little bit off frame, or even incorporating a lower shutter speed, just so it doesn’t look perfect. The imperfections are part of the subculture, and you’re using your camera to capture the actual motion and feeling of it.” 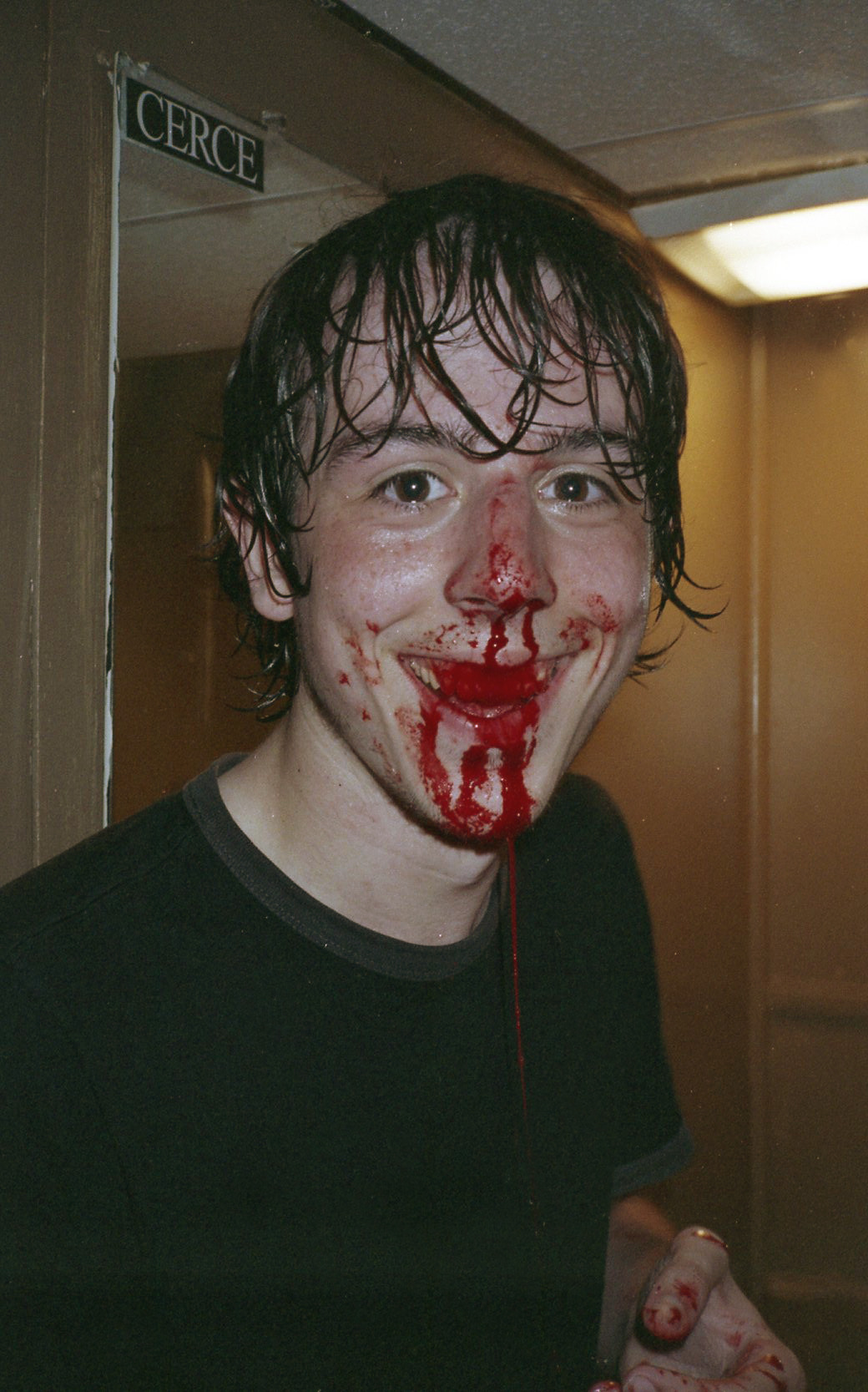 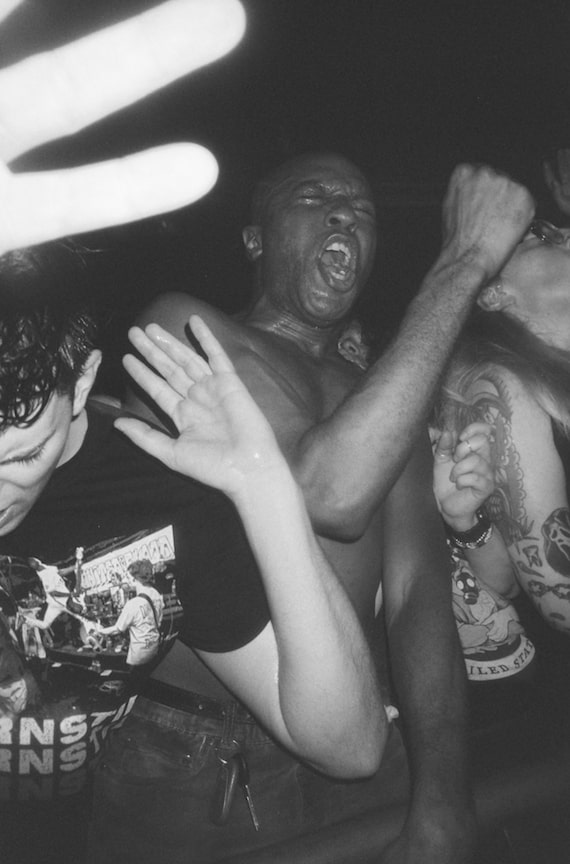 Lader and Henery are both interested in documenting the culture and characters of hardcore as it extends beyond a show. The latter spent part of last year on the road with Turnstile, slinging merch while cataloging the band’s pinwheeling rise. Each night he’d speak with people at the show, meeting audiences that were changing in real-time. Alongside the old heads who’d been following the group since their demo was released, he encountered kids who’d caught Turnstile opening for New Orleans hip-hop duo $uicideboys$ on their Grey Day tour in 2021. “What does it look like to document a hardcore band that’s essentially breaking into places that a hardcore band has never been before?” Henery asks.

Some of his most vivid images from that time are entirely focused on the crowd, with hands jutting into frame and wide angles capturing complete havoc. “I think what makes Turnstile Turnstile is this culture that they bring to their shows,” he says. “There’s such a variety of people and an energy that’s exciting, especially as they grow into the realm of stadiums and general pop acts. They stand out.”

For Owens, growing up in North Carolina in a friendship group who were playing in bands, putting on basement shows and making zines gave her ample opportunity to capture the scene with her camera. “I started taking it seriously when my friends started saying, ‘Hey, can I use this for my zine? Can we use this for our seven-inch?’” she says. 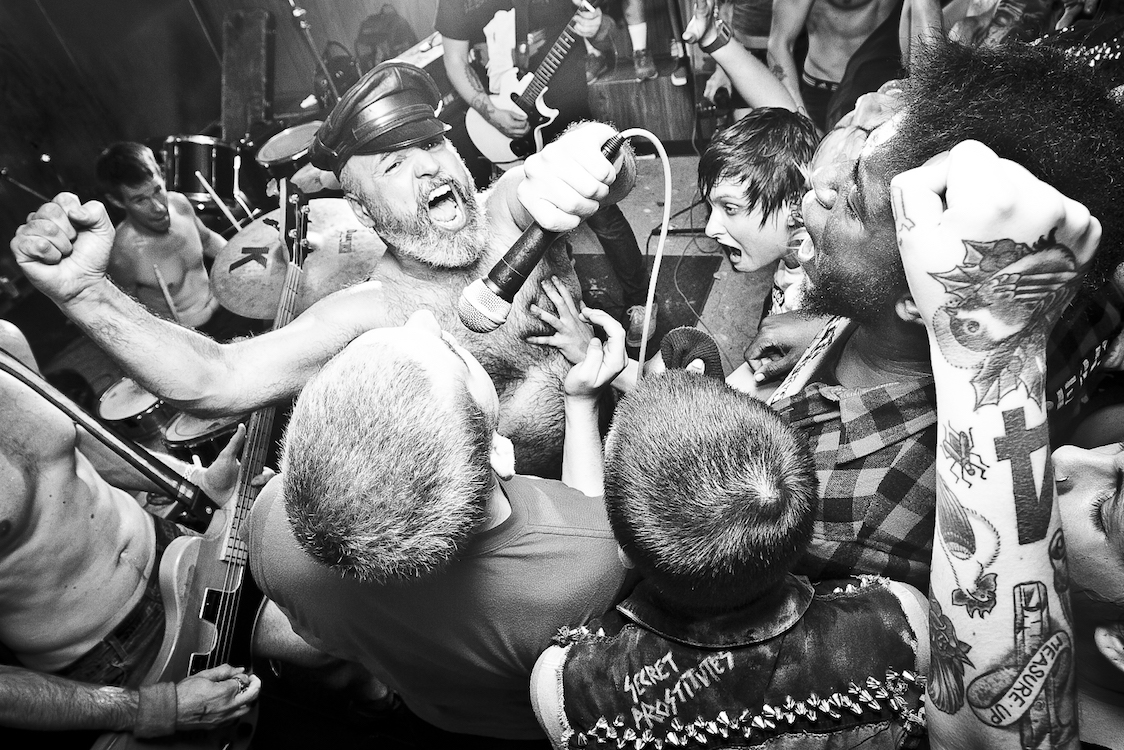 Having later studied photojournalism, and now in tandem with her work as photo editor at the Wall Street Journal, Owens views her hardcore photography through a journalistic lens. To her, it’s about patience, understanding the music, and a sense of truthfulness. Perhaps the most remarkable aspect of her style is the way it makes the transfer of emotion between crowd and performer pop, such as her photos of a teeth-bared Rhylli Ogiura from New York bruisers Krimewatch, or the facial expressions frozen in time beneath Fiddlehead vocalist Pat Flynn as he whips his mic cable like a lasso.

“I’m always looking for that moment when everyone’s letting loose,” she says. “It can’t be done unless you know the music. If you’ve seen this band before, you’ve listened to the record, you know when that moment is coming. I use the exact same approach with my work that I do with shooting hardcore. I want to be a fly on the wall. I don’t want to interrupt or disrupt at all.” 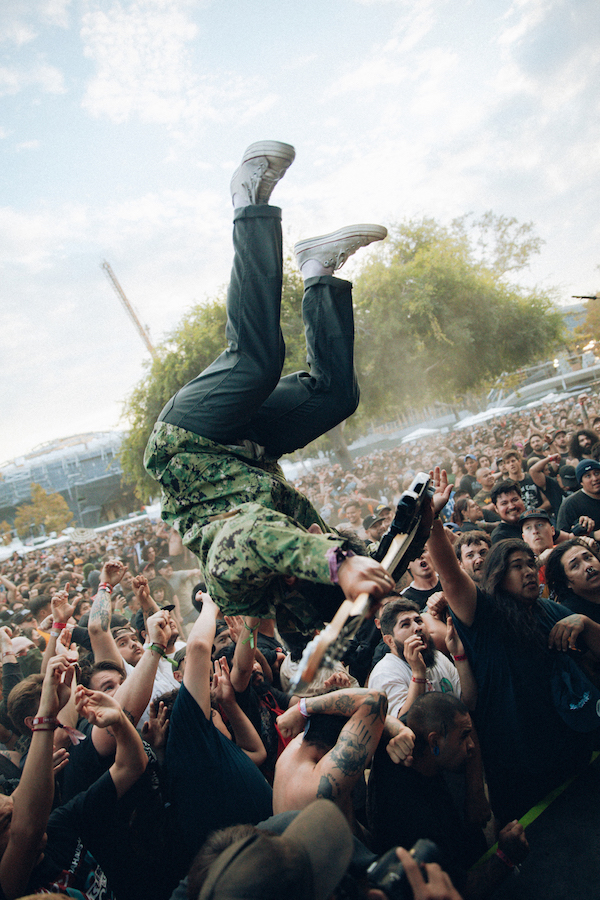 One issue confronting these photographers is the fact that shooting hardcore has recently blown up; all of a sudden it’s an extremely crowded field. Both Alfonso and Henery comment on the sheer number of people shooting hardcore shows, and the diluting effect it can have. The pressure is on to stand out. “You get this intense oversaturation, you’ve just seen it too much, and it becomes boring,” Henery observes.

The other side of this coin is the fact that hardcore photography will perhaps continue to be an inventive, boundary-reshaping element of the genre for years to come in the hands of a younger generation who’re just waking up to its possibilities. “I feel like if you get to a point where you’re like, ‘This is it, I have reached my style, this is what it is, and I’m not changing it’ you’re doing a disservice to yourself,” Lader says. “You can always learn more, and you can always try new things.” 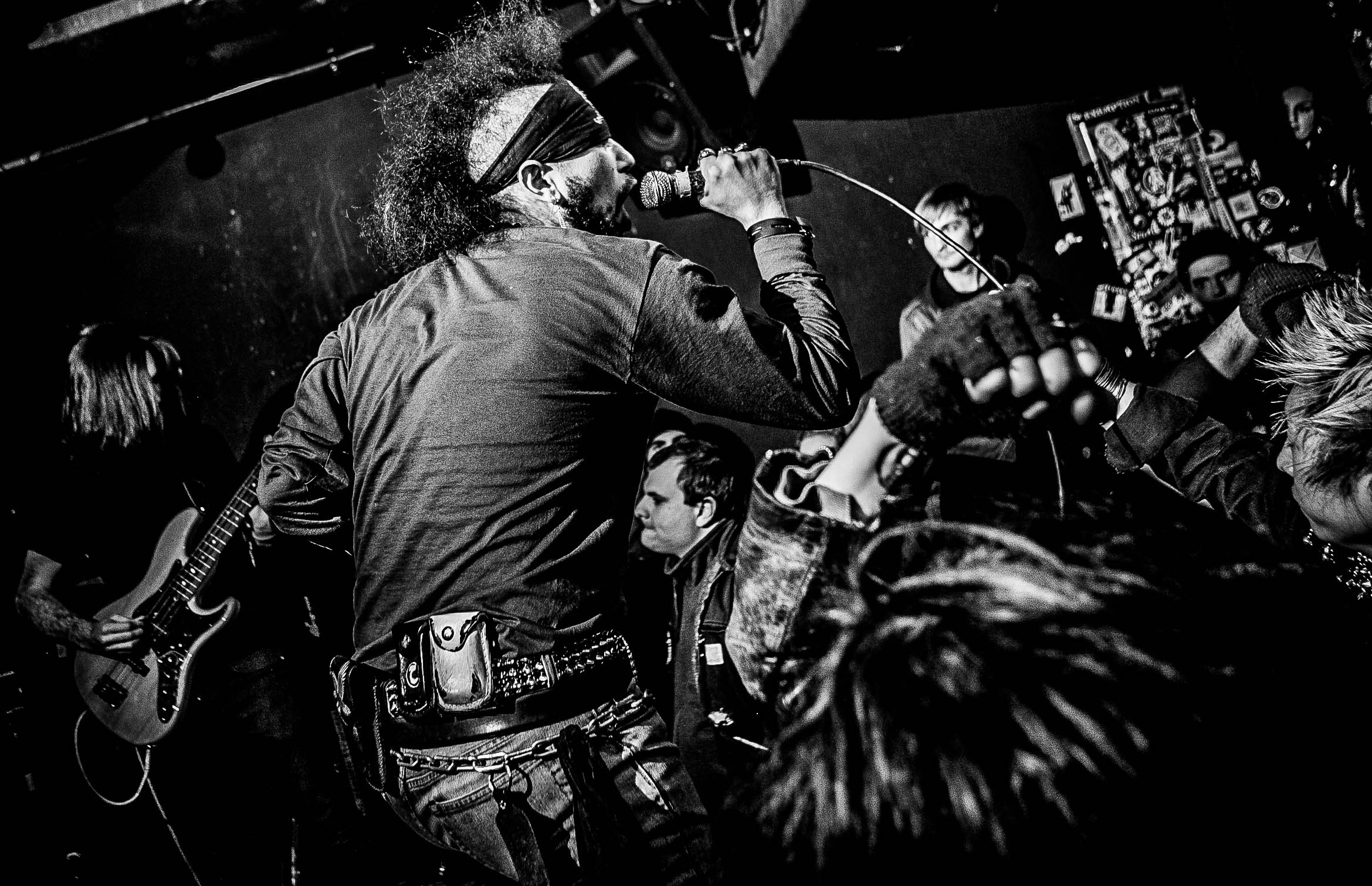 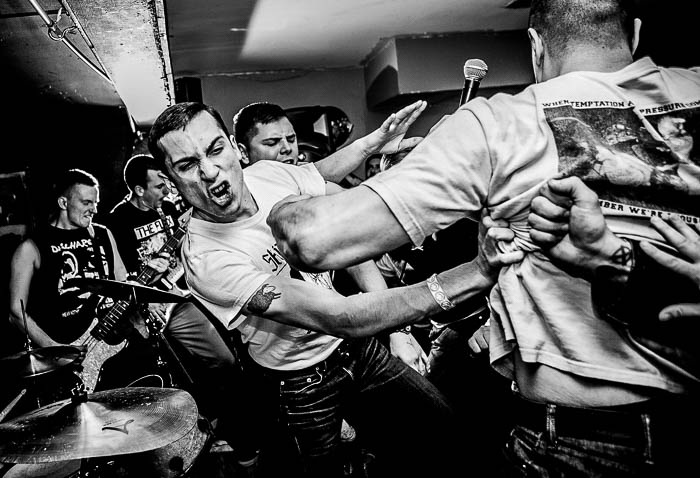 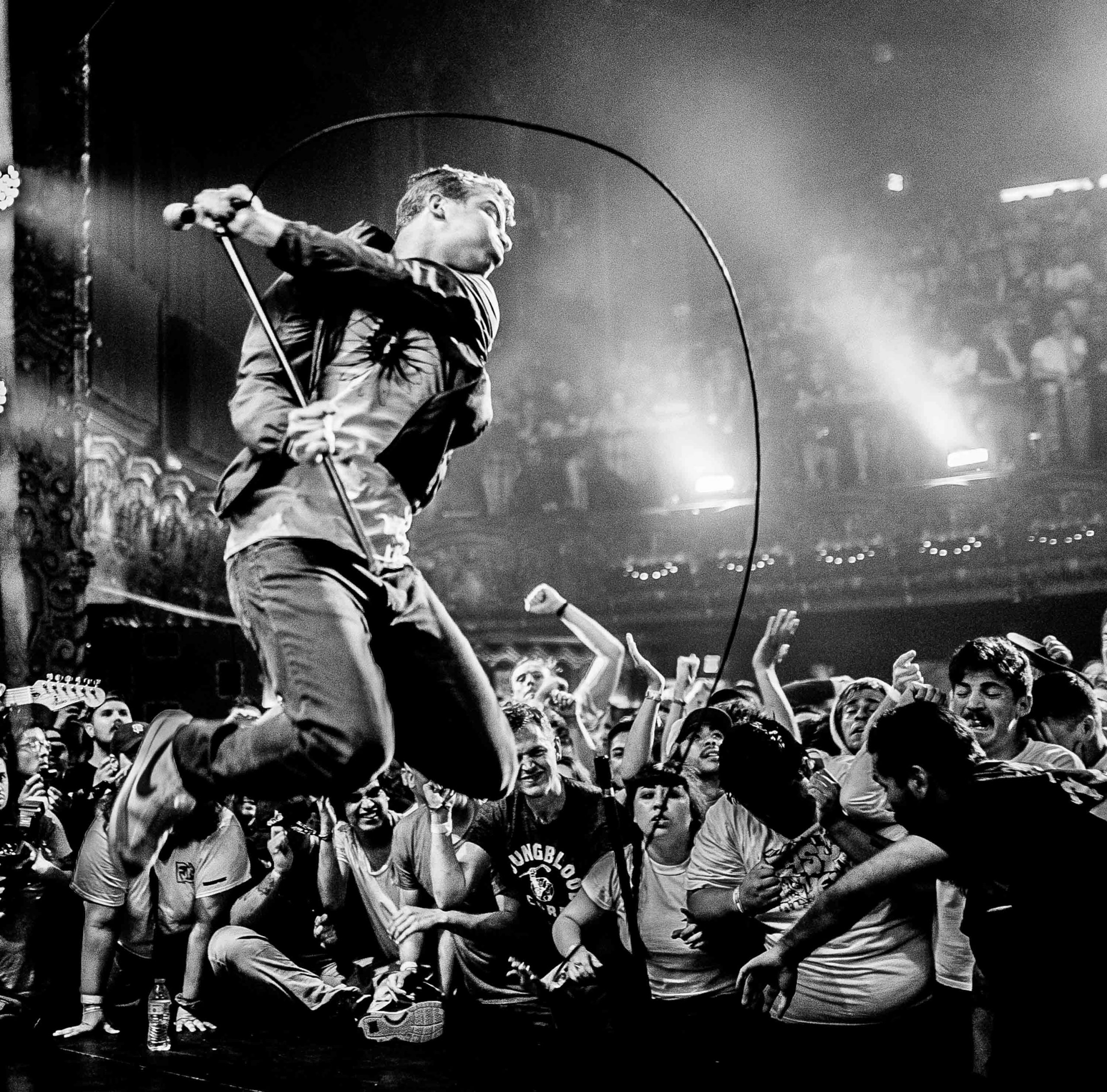 Fiddlehead at Sound and Fury 2019 by Angela Owens 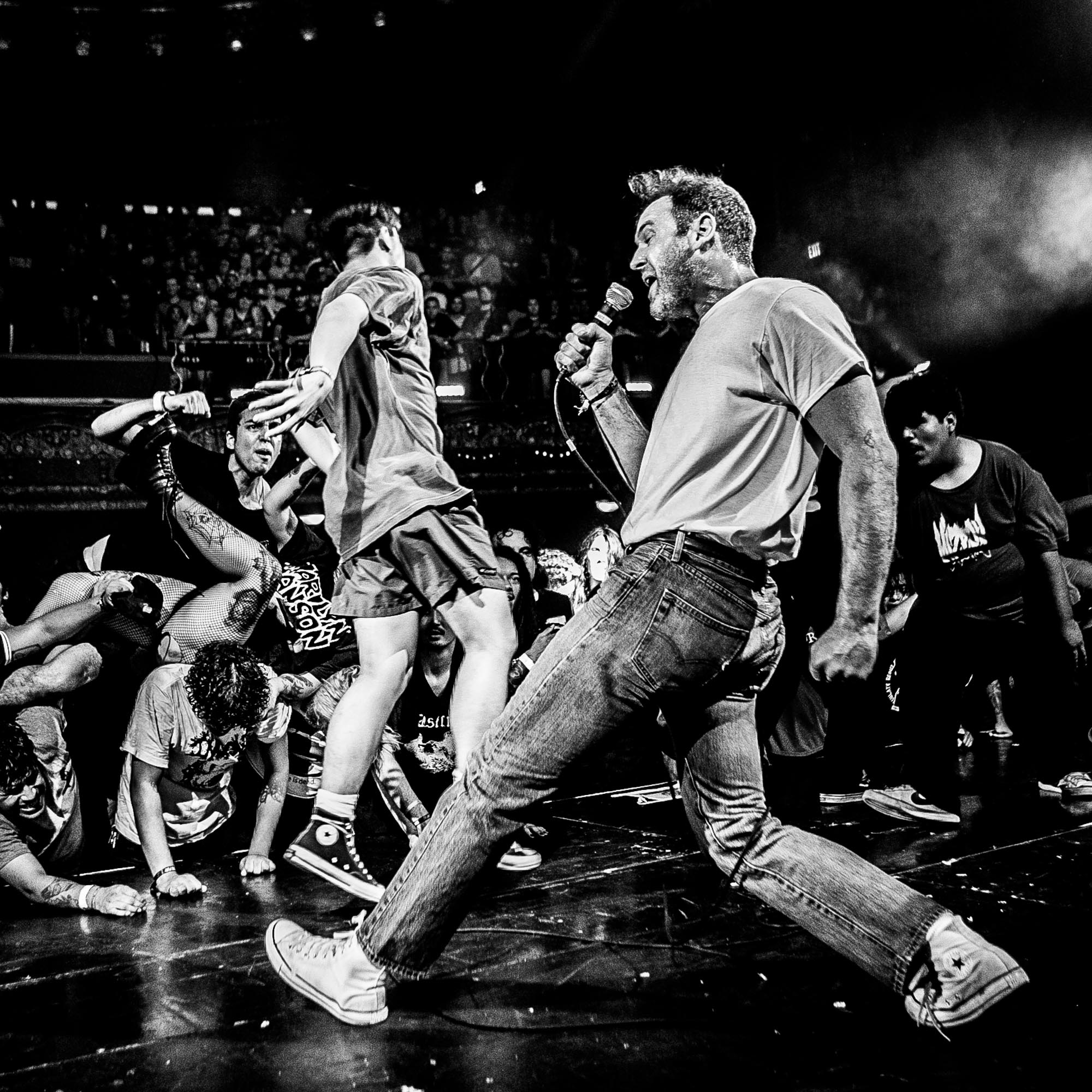 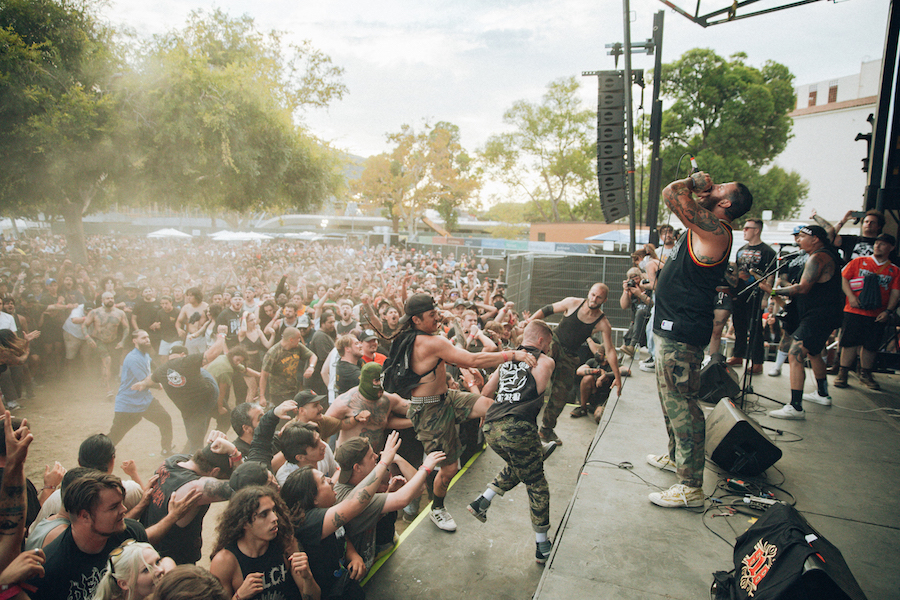 Linkedin
RELATED ARTICLES
OTHER ARTICLES
The idea that a younger generation is abandoning work has become a popular narrative online, but it doesn’t necessarily reflect reality.
Yesterday thousands gathered outside Buckingham Palace after news of the Queen’s death broke.
Photographer David Corio’s archive offers a glimpse inside a revolutionary era of music and nightlife.
In his 2008 series, the photographer pictured himself as Angela Davis, Martin Luther King Jr., Malcolm X, and other prominent figures.
From bleeding noses to crowd surfing, three image-makers reflect on capturing the scene in all its wild glory.
Rhiannon Adam spent three months capturing an ageing society wracked by division, isolation, and the aftermath of scandal.