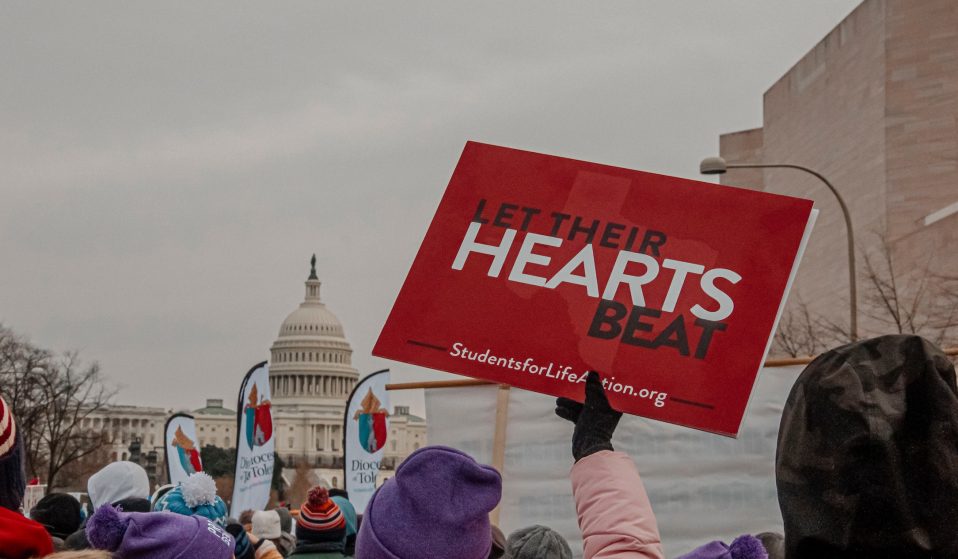 The news that Roe v. Wade could be overturned has seen an emboldened anti-choice movement targeting clinic employees and patients.

The leaked draft showing that the Supreme Court has voted to overturn abortion rights has seen an emboldened anti-choice movement targeting clinic employees and patients.

In the coming months, the entire bedrock on which abortion access in the United States rests is set to be stripped away. Leaked documents indicate the Supreme Court is set to overturn Roe v. Wade, a landmark 1973 Supreme Court ruling which decided that a state law prohibiting abortions was unconstitutional, effectively legalising abortion across the country. Due to laws and constitutional amendments already in place, in preparation for this moment, 22 states will be immediately set to ban abortion, with four more expected to follow not long after. A final decision from the Supreme Court is expected to be reached by late June or early July.

The past few years have seen the most sustained and aggressive assault on the right to choose in the last 50 years – but these battles are not only being waged in the courts. On New Year’s Eve, residents of Knoxville, Tennessee, which has had a ‘trigger-ban’ (a law passed that states its provisions are only activated in the event of Roe v. Wade being overturned) since 2019, woke to the news that the city’s Planned Parenthood clinic had burnt down. A week later, the ruling of arson by local police came as no surprise to many, given a gunman had shot through the clinic’s doors on the anniversary of Roe v. Wade earlier that year.

Far from being an isolated incident, Knoxville is part of a growing trend of violence and intimidation toward abortion clinics, their employees, and patients. The National Abortion Federation – which has been recording violence and disruption at abortion clinics since 1977 – found that 2020 represented a decade high for arson attempts, assaults and death threats made toward clinic employees.

Now, those fighting to ensure access to abortion for all who need it are facing an emboldened anti-choice movement. “We had an anti-choice protestor trespass twice after the SCOTUS leak came out,” says Mary, a clinic escort in North Carolina. In the past, Mary has also been shoved by protestors while volunteering. “We are preparing. We were preparing for June but got surprised. We cannot just scream and rage, then forget it a couple of weeks later. It is exhausting, but we need to keep going.”

Reminder that rich people will always have access to safe abortion, even if Roe v. Wade is overturned. Not only is this attack rooted in misogyny, it’s also rooted in classism, racism and anti-Blackness. This fight is for our collective bodily autonomy.

Melissa Fowler is the Chief Program Officer at the National Abortion Federation. “With increasing frequency, these anti-abortion extremists are assaulting patients and clinic workers,” she tells Huck. “With the leak of the SCOTUS opinion, we are working with our members to prepare for a number of clinics that are likely to see a rise in harassment and violence from extremists emboldened by this news.”

Emerging data from 2022 also suggests a rise in blockades outside clinic entrances and invasions, where clinics are stormed by anti-choice protestors in an attempt to prevent procedures from taking place. These tactics mirror those that took place at the height of the anti-abortion protest movement in the 1980s and early ’90s, where anti-choice politics gained a more militant streak due to its overlaps with white nationalism. Most prominent was the extremist group Operation Rescue which deployed thousands of activists during its ‘Summer of Mercy’ in 1991 to shut down a clinic for an entire week, and produced WANTED posters with abortion providers’ personal details – similar to those previously made by the KKK.

The pro-choice movement is now witnessing worrying overlaps between anti-choice protestors and newer white nationalist groups. Many prominent anti-choice activists were identified as participants in the 9 January 2021 Capitol Riot, such as John Brockhoeft, convicted of firebombing an Ohio abortion clinic in 1988, and Derrick Evans, who has a restraining order due to his repeated harassment of clinic employees. Since then, Patriot Front has been spotted at the annual March for Life in Washington DC, and armed Proud Boys have provided security for anti-abortion protestors.

“We witnessed an anti-choice protestor who accidentally shot themselves, which proved that they were carrying guns while protesting, which is illegal, but still happens,” says Mary. America is still reeling from a mass shooting at a Texas primary school that left 21 people dead, and the increased presence of guns outside clinics serves as a visceral reminder of similar anti-choice violence.

In 2015, a mass shooting took place at a Planned Parenthood clinic in Colorado, as the perpetrator, who later in court referred to himself as a “warrior for the babies” killed three people and injured nine others. Mel was an employee in another Colorado Planned Parenthood clinic at the time and vividly remembers the aftermath of the shooting. “My husband at the time didn’t want me to go to work the day after the shooting. I felt it was important to demonstrate that we were still there for the patients who needed our services, so I went,” she tells Huck.

“Local college students and other supporters of the clinic turned out as sort of a counter-protest to demonstrate their appreciation for the employees and organisation that morning. People kept bringing in cards and letters and flowers and sometimes baked goods. It was very overwhelming that day.”

Here at Capitol Hill Crisis Pregnancy Center in DC where someone dumped red paint on the door, egged the windows, and wrote “Jane Says Revenge.” The director of the pro-life clinic told me the vandalism makes her incredibly “sad” in light of the work they do every day. pic.twitter.com/Qo1lu60eNn

Even average days involved a state of high alert for Mel and other Planned Parenthood employees, who undertake extensive training to deal with the sheer range of tactics used by anti-choice protestors. “They included how to handle bomb threats on the phone, non-engagement of protestors when you were arriving to work, active shooter drills, and what to do if you thought you were being followed after leaving work,” explains Mel. She recalls protestors circling the clinic shouting abuse from loudspeakers, and how she once found time-stamped photographs of herself on a website run by anti-choice activists identifying her as a clinic employee.

The Freedom of Access to Clinic Entrances Act, a federal law introduced in 1994 by Bill Clinton, aimed to prevent actions like these by making it a federal crime to obstruct the entrance to an abortion clinic, or to use force (or the threat of force) to intimidate or harm employees, patients, or volunteers. During the Clinton administration, charges and convictions were readily pursued against aggressive anti-choice protestors, but now the act is rarely enforced by the Department of Justice, with only 14 cases having been filed in the last five years.

From this summer, rather than being used simply for intimidation, anti-abortion protestors are expected to use photographic evidence of clients entering clinics to encourage prosecutors in states where abortion will become illegal to criminalise these women. Other techniques used by protestors such as licence plate tracking to establish the identities and track movements of clients are expected to increase significantly as ‘abortion surveillance’ will become a key part of the anti-choice movement’s work into the future.

Lauren Kokum, director of affiliate communications, Planned Parenthood Federation of America, is unequivocal about the impact these protestors have on employees and patients across their services: “The bottom line is acts of hatred and violence against abortion providers and health centres harm providers and interfere with patients’ ability to access care,” she says. “Nobody should have to face shaming, judgment, harassment, or intimidation in order to get or provide health care.” However, whatever happens, Kokum is clear they “will continue to provide essential sexual and reproductive health care in a safe and supportive environment – no matter what.”

Linkedin
RELATED ARTICLES
OTHER ARTICLES
In her new book, the author explores the country’s housing crisis in human terms and calls for radical action to address a broken system.
The singer-songwriter discusses her intimate new project – and the advice she’s picked up across a career as one of rock’s leading voices.
Photographer Arthur Grace recalls travelling through the Soviet Bloc and finding ways to evade the surveillance of his work.
Photographer David Hoffman recalls documenting the extreme wealth inequality around Tower Hamlets and Hackney int the 1980s.
50 years since its inception, and the campaign calling for recognition that capitalism depends on domestic labour is as pertinent as ever.
Freddie Miller’s new series of photographs investigates who today’s trainspotters are and what drives their unfettered enthusiasm.