Art & Culture / The unsolved murder that shaped the US labor movement 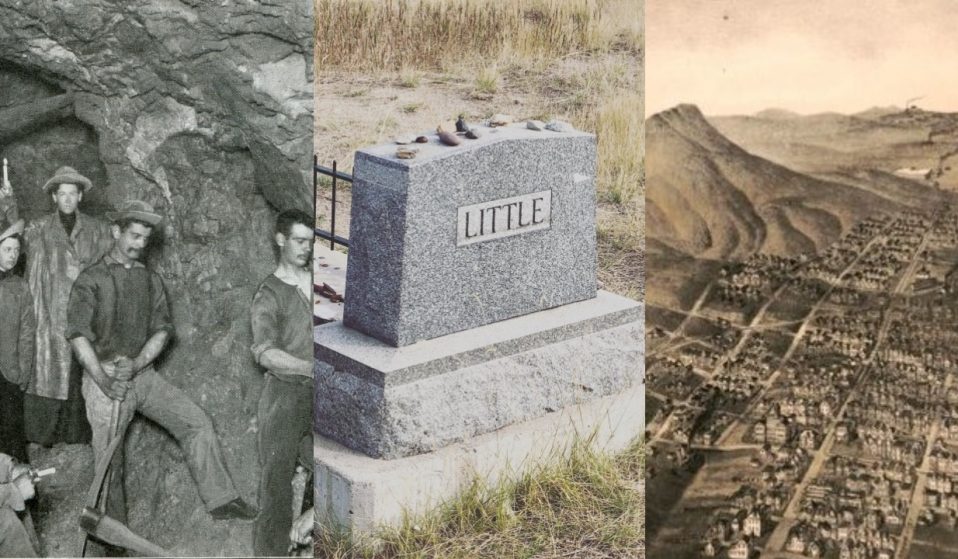 A new podcast seeks to uncover the truth behind the mysterious lynching of a Montana unionist in 1917 and the cataclysmic rise and fall of his hometown of Butte.

A new podcast seeks to uncover the truth behind the mysterious lynching of a Montana unionist in 1917 and the cataclysmic rise and fall of his hometown of Butte.

In the hills just north of Butte, Montana, is one of the largest contaminated ‘Superfund’ sites in the United States, with toxic runoff from copper smelting and an open-pit mine filled with water that’s about as acidic as lemon juice. Over a hundred years ago, Butte was also the site of the largest hard rock mining disaster in the country’s history, which set off a massive miners strike and led to the murder of well-known union organiser Frank Little, forever reshaping the course of labour history in the United States.

“Death in the West” – a new documentary podcast produced by four Montana natives – attempts to grapple with that murder and investigate Butte’s checkered past. Little was instrumental to the development of civil disobedience and peaceful protest in the early 20th century, organising casual labourers across the country as part of the International Workers of the World (IWW).

“He was their best organiser. They would send him to the scene of trouble,” says Zach Dundas, one of the podcast’s co-hosts and creators. That was how Little ended up in Butte during the summer of 1917, delivering rousing speeches to workers from the Anaconda Copper Mine and leading strike marches through the city’s main street.

“What both Frank Little and Bute do is allow us to poke some holes in the mythology of America, and the American West in particular,” explains Leif Fredrickson, another co-host and creator of the show. “People just don’t have a sense of how violent the labour struggle was in the US.” Rather than just dusty towns and outlaw gunfights, the podcast sets out to show how the American West was the site of a fiery class struggle.

Little was taken from the rooming house he was staying in Butte during the midnight hours one day in August, 1917, by six hooded men. He was dragged behind a car through town and then found the next morning hanged in a Butte trainyard, with a cryptic note pinned to his body – a warning to other union organisers. Little’s death effectively crushed the strike action – one that was unfolding as a crucial showdown between workers and corporate greed.

A police investigation into the crime came up with nothing. Most suspect that the Anaconda Mining Company, a powerful force in local politics with close ties to the police force, was behind the murder. The murder is one of the state’s most famous local crimes, and Little’s funeral procession remains the largest in Butte’s history.

Looking east on Park Street, Butte, Montana. Streetcar tracks run down the center of the street with a streetcar on the tracks. A car is on the street, and pedestrians walk along the sidewalks. 1908. #mthistory #montana #history https://t.co/7LbUQ1HgNu pic.twitter.com/SQhopEhh6D

A dusty town at the edge of the Rocky Mountains, Butte was first settled as a mining town, and at its peak, it was a bustling outpost in the American West, with bars that stayed open 24-hours a day to accommodate the hoards of shift workers who worked around the clock at the Anaconda mine. Today, so bad are the effects of that mining that the Environmental Protection Agency (EPA) has named the landscape around Butte as one of its top priorities – a noxious cleanup puzzle buried deep in the water table.

The podcast, interwoven with archival sound, ethnographic interviews and folk tunes from Butte musicians, looks to make sense of the town’s cataclysmic rise and fall. Visiting Little’s gravesite and talking to IWW organisers that carry the torch of the radical union’s tradition today, Death in the West upends the true-crime podcast formula of victim and perpetrator, searching out the longer story of left-wing activism and its suppression – a narrative that continues to play out today.

Butte’s mining history may have given us the hardboiled crime genre as well. Dashiell Hammett, author of The Maltese Falcon and other film noir classics, worked in Butte as a private investigator for Pinkerton’s, a national detective agency, right around the time of Little’s murder. Pinkerton had been hired by Anaconda to suppress union organising. “[Anaconda] started hiring agents to come in and spy on unions and to infiltrate them,” says Leif. Hammett based Poisonville, widely considered the first hardboiled detective novel, on his experience living in Butte.

The IWW marches in Butte brought stirring songs and dramatic confrontations with Butte’s most powerful people. Little had been vehemently against America’s involvement in the First World War. The strike had stopped production at the mine, meaning that copper could no longer be supplied to the war effort. It was a significant point of leverage for the miners fighting for workplace safety and better conditions.

Copper from the Anaconda Mine – the largest source of the conductive ore in the country in the early 20th century – was also central to the dawn of electrification in the United States. “It’s kind of the moment when you first see a real modern popular culture coming to be and a lot of that’s because of electrification,“ says Dundas. Travel back in time to a pre-electrification city and the result would be almost unrecognisable. Butte’s cheap copper drove the development of electrical grids and made the city as we know it today.

For Butte itself, the environmental impacts of the mine are enduring. “It will never be fully cleaned up,” says Leif, “there will be aspects of it that will be mitigated in perpetuity.”

Butte is an emblem of the American West – from prospectors to showmen, like Butte native Evel Kineval. Death in the West looks to revise the story of rugged individualism and show how pivotal socialist organising and workers’ collective struggle was in the myth of the frontier. The resurgence of union organising today, from couriers to Amazon warehouse workers, software developers to fast-food workers, make Little’s story all the more pressing.

Death in the West is available now on most major streaming platforms.

Linkedin
RELATED ARTICLES
OTHER ARTICLES
Photographer David Hoffman recalls documenting the extreme wealth inequality around Tower Hamlets and Hackney int the 1980s.
LGBTQ+ students are keeping the spirit of the original Pride alive by fighting for liberation for everyone, not just their community.
Freddie Miller’s new series of photographs investigates who today’s trainspotters are and what drives their unfettered enthusiasm.
In her new book, the author explores the country’s housing crisis in human terms and calls for radical action to address a broken system.
The author discusses the all-consuming nature of heartbreak, and turning the experience into an incisive exploration of love and loss.
In the latest instalment of Photographers in Conversation, the chronicler of raves, protests and beyond explains why he’s drawn to such specifically visceral environments.