Art & Culture / The unstoppable rise of the Celtic language influencer 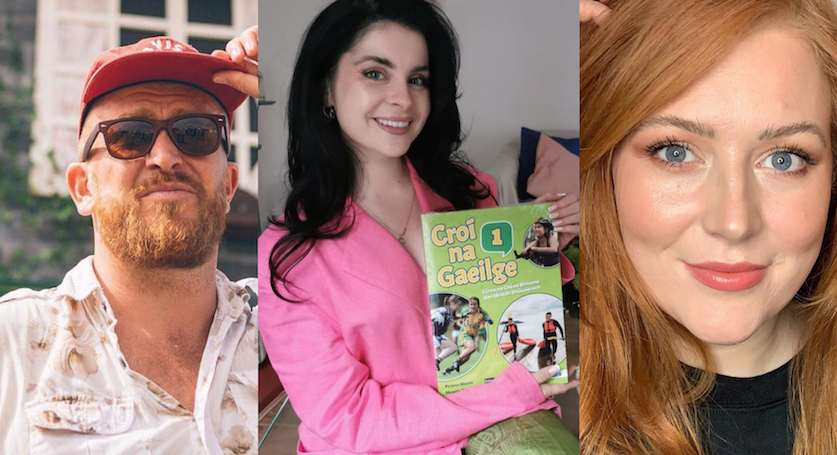 Despite their continued marginalisation, indigenous languages survive – and some speakers are proudly sharing their tongues online, showing their followers the value in an ancient way of communicating.

Despite their continued marginalisation, indigenous languages survive – and some speakers are proudly sharing their tongues online, showing their followers the value in an ancient way of communicating.

The biggest misconception about the ancient Celtic languages is that they are dead, and that they died because speakers slowly decided to stop using them. Some people will tell you that this isn’t a problem – language evolves, everyone speaks English now, we should just let them disappear. If a language is defunct already, then why spend money and resources resuscitating it?

But this convenient myth glosses over the fact that English speakers have a long history of suppressing the indigenous Celtic languages, often through violent means. Gaelic was the main language of rural Scotland for 12 centuries, until it was outlawed in 1616 – less than a hundred years ago, children were still being beaten into speaking English.

Children caught speaking Welsh in schools were similarly physically abused by teachers, in an effort to stamp out the language. A series of harsh laws beginning in 1367 were used by the British to ban the use of Irish, and the Prayer Book Rebellion of 1549 saw 4,000 Cornish people killed for protesting the Act of Uniformity, which outlawed any language except English being used in church services.

The legacy of these brutal regimes is still felt, with the UK recently being accused of failing to support its indigenous minority languages, despite signing the European Charter on regional languages. Under colonial legislation dating from 1737, it’s still illegal to speak Irish in court in Northern Ireland, and even as recently as February this year, a couple was told they could not have their wedding in Cornish.

But despite a turbulent history, and continued marginalisation, these resilient languages survive – and some speakers are proudly sharing their tongues online, piquing the curiosity of their followers and gaining influencer status in the process.

When Dublin teacher Meg O’Connor started sharing some Irish words on her private Instagram account, she was encouraged by friends to set up a public page. “They thought there was a gap in the market because there was not much Irish online,” she explains. Meg’s fashion and lifestyle snaps, which are posted to her account @muinteoirmeg (múinteoir means teacher) and captioned solely in Irish, have earned her an impressive following of 22,000 people.

“I can’t believe that there are so many people who are interested in the content that I’m putting out,” says Meg. “When I started out there were maybe two Irish language accounts online, and now there are so many of us.”

Beauty Instagrammer Kirsty MacKinnon, 33, had a similarly positive reaction to her Gaelic language content. She grew up on the Isle of Mull, off the West Coast of Scotland, where Gaelic was once the majority language. “My dad’s first language was Gaelic and he didn’t really speak English until he started school where Gaelic was discouraged,” she explains.

“Because of this, he didn’t speak Gaelic to me or my sister as we were growing up. I think he regrets this now that he knows of the benefits of bilingualism and understands why it is so important to keep Gaelic going.”

Friends often turned to Kirsty for beauty advice, which led her to establish her Instagram account, @ciorstag_, where she could combine her interests in makeup and skincare with the Gaelic language. “I have many followers who haven’t spoken Gaelic for years and enjoy hearing it again to help them improve, learners who are just new to the language and Gaelic speakers who are happy seeing their language represented,” she explains.

Both Meg and Kirsty’s Instagram accounts prove that the Celtic languages are not stuck in the past – they have successfully evolved, and are equipped with the vocabulary to reflect modern life. “People are so happy to have this kind of resource online – it’s something that they can relate to, whether it’s someone doing their makeup, talking about their clothes or going on a date,” says Meg. “It’s so normal in comparison to the content that you learn at school.” (At present, Irish is a compulsory subject in schools in the Republic of Ireland, something supported by a majority of students).

Celtic content is taking off on TikTok, too, where the hashtag #CelticTikTok has garnered over five million views. Welsh speaker Jess Thomas, 21, has amassed nearly 60,000 followers on the platform thanks to her witty Cymraeg themed content.

“I’ve done videos with simple Welsh phrases to learn, and if I make a TikTok video in Welsh I tend to get a lot of comments back in Welsh,” explains Jess. “A lot of people are really happy to see someone on there using the language.”

Jess learned Welsh as a second language at school, and has found that interacting with first language speakers online has helped to improve her language skills. But negative comments from non-speakers do crop up. “People comment saying, ‘You’re only speaking in Welsh so we don’t understand you’, but I’m not – I’m just trying to keep the language going.”

Similarly, actor Edward Rowe, 42, known on Instagram and Twitter as ‘Kernow King’, has faced backlash from people who take issue with him identifying as Cornish, instead of English – despite the fact that just earlier this year, the Cornwall Council urged people to identify as Cornish in the Census. “It drives some people mad,” he explains. “I’m not saying it to be incendiary, it’s a fact. The replies can get a little heated, but I typically reply in Cornish. How can I be English if Cornish is my native tongue?”

Sharing his language with thousands of people has given Edward the opportunity to sharpen his linguistic skills, and to find solidarity within the Cornish community, too. “Sometimes, you just need to talk to someone in Cornish,” says Edward, “and social media is the perfect tool to have a chat.”

Each of the Celtic languages faces its own unique challenges – some more acutely than others. The Welsh language is gaining strength, with over one-quarter of Wales’ population now able to speak Welsh, and the Welsh government aiming to bring that total to one million by 2050. In 2010 Cornish was taken off Unesco’s list of extinct languages, and is now being taught in some primary schools. However, a study showed that within ten years, Scottish Gaelic could disappear, with most speakers belonging to older generations.

To secure the future of the Celtic languages, it is important that they are represented online, and can be used to articulate contemporary issues – something that these influencers are doing effectively. “It’s clear to me that Gaelic has to be on our phones and on social media,” says Kirsty. “We have to be seeing, hearing and using it daily – not just for traditional uses.”

Meg is also optimistic that influencers could help preserve the Irish language. “I believe that online content can help the language to thrive, because people are seeing it in a really normal light,” she says. “Often learners don’t think that we have the Irish for everything, like it’s a textbook language in their eyes, which is so sad. But anything you can say in English, we can say in Irish.”

The rise of influencers using Celtic languages may help to reinstate a sense of pride in these ancient words, and help bring them back into widespread use in the communities where they were born. From there, they can again become a natural mode of expression – the chatter between friends and the way people talk about sadness and joy. After all, as Edward points out: “The internet most certainly does promote the Cornish language – there are classes, books and resources. But ultimately, you can’t beat speaking Cornish with a bunch of people in the diwotti (the pub).”

Linkedin
RELATED ARTICLES
OTHER ARTICLES
Students are being left to languish in unsafe housing, in some cases leading to serious health complications.
A woman from Texas explains how she was forced to consider the criminal liability she might face for medication abortion over her health.
To mark the premiere of his new documentary on surfing giant Gerry Lopez, the filmmaker and former pro skateboarder sits down to share his unique brand of wisdom.
With the UK now set to run out of vaccines, people working in the sex industry – particularly outside of major cities – have been left especially vulnerable, reports Brit Dawson.
From the early originators to the female writers at the forefront of today’s scene, we talk to the artists redefining graffiti’s consciously macho origins.
Photographer Bud Glick recounts documenting everyday life in the area, and what it taught him about the Chinese immigrant experience.