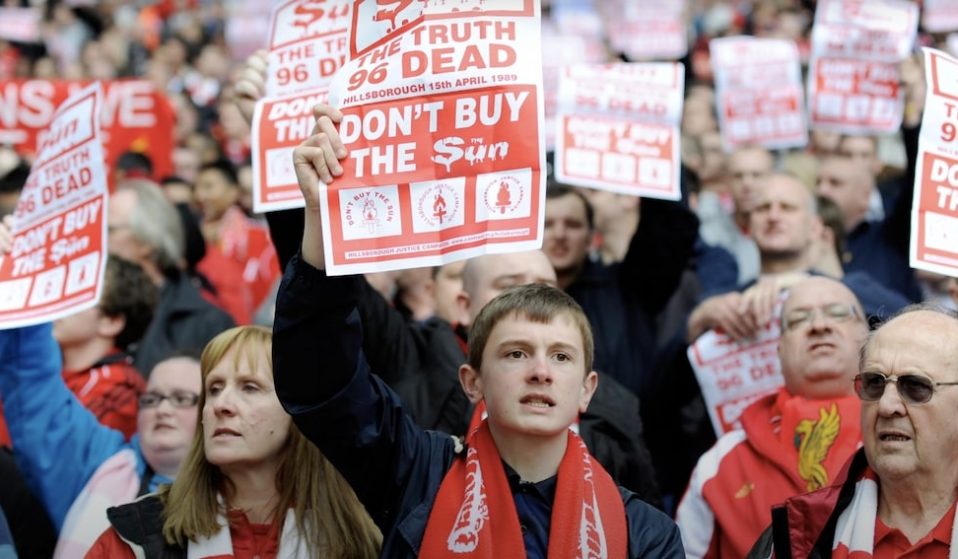 Photography © Still from “Protest Banners: Hillsborough” by OpenLearn via YouTube

A campaign seeking to prevent future injustices where there is state involvement is gaining momentum, with Labour recently pledging its support.

A campaign seeking to prevent future injustices where there is state involvement is gaining momentum, with Labour recently pledging its support.

Charlotte Hennessy was six years old when she lost her dad. It wasn’t until age 30 that she found out what actually happened to him.

His name was Jimmy and he was one of 97 people to die as a result of a human crush at a football match between Liverpool and Nottingham Forest in 1989, otherwise known as the Hillsborough disaster. What happened at Hillsborough is imprinted on national memory and the histories of individual families – not just for its death toll, but for what it revealed about the state and the institutions that kept its secrets and legitimised its lies.

Jimmy lost his life because of a series of state failings, and Charlotte learnt about these failings too late because of yet more. Owing to her and her family’s experience, she is now part of a coalition urging a so-called Hillsborough Law, or Public Authority (Accountability) Bill. Championed by the likes of Ian Byrne MP and Mayor of Greater Manchester Andy Burnham, its aim is to put an end to the cruel chain of abuse and concealment experienced by survivors of state tragedy.

All of the Liverpool fans that died on the day of the crush at Hillsborough were recorded as deceased by 3.15pm. They all shared the same cause of death: traumatic asphyxia. Under the headline “THE TRUTH”, The Sun newspaper claimed that some football fans had “picked pockets of victims”, “urinated on the brave cops” and “beat up PC giving kiss of life”. This isn’t what happened but, if it weren’t for the efforts of victims’ families and the scepticism many of the general public felt and voiced in solidarity, it might still be the official record.

“When I was 15 or 16, I realised things weren’t quite right,” Charlotte tells Huck. “Why was the Taylor Report [the 1989 inquiry into the causes of the Hillsborough disaster] saying that fans weren’t to blame and putting in recommendations for safer stadiums, but then you’ve got The Sun newspaper article saying that [fans] were doing all these terrible things?”

Things finally changed in 2012 with the release of the Hillsborough Independent Panel report. This testified to failures by the police, emergency services and coroner, and saw the launch of two criminal investigations. “THE REAL TRUTH”, splashed The Sun in response to the findings. “Cops smeared Liverpool fans to deflect blame”; “41 lives could have been saved, says new probe”.

When the truth did emerge, it turned out that Jimmy was one of the 41 who could have survived. “He was actually found alive on the pitch by a police officer,” Charlotte recounts. “The police officer took him to the gym, where he thought that he would get help. My dad was eyes open, sat up, vomited, lifting his arm: real signs of life. This wasn’t someone who could be mistaken for dying. This was someone who was very much still alive.” But then: “Two other police officers came along and just whipped my dad straight in a body bag and zipped it up. So he was unconscious and inside that body bag.

“My dad was definitely still alive by 4.09pm. They came along [again] a little later on to search my dad for identification. And it wasn’t until they were interviewed by Operation Resolve in 2014 that one of the police officers admitted that, when he went back to my dad, my dad was very hot and sweating. And he’d vomited inside the body bag. And they still didn’t go and tell someone that they thought this person could be alive. So they washed him down and put him back in for the second time.

“My dad’s cause of death is actually inhalation of copious amounts of stomach content. That is what killed him: the sheer negligence.”

The Hillsborough disaster is one of several examples from recent history of mass casualty incidents or occurrences leading to multiple deaths where the state has failed in its duty of care to citizens. Others include the Grenfell tower fire; healthcare failures such as the contaminated blood and sodium valproate scandals and the mishandling of the Covid-19 pandemic; and the fallout from our nuclear weapons testing programme.

My thoughts are with the many bereaved families of those lost in the Hillsborough disaster.

We must never give up in the fight for justice and a Hillsborough Law. #JFT97 pic.twitter.com/6TocFPm0E0

Fatalities and injuries tend to be at least partially caused by negligence, deliberate malpractice, or both. And generally, rather than a rapid facing up to what has happened, changes to avoid it happening again, and adequate compensation for those involved, the response is a cover-up operation.

It would see public officials bound by a ‘duty of candour’ – criminalising lying, withholding evidence and deliberately not complying during proceedings – and by a need to publish and abide by a ‘code of ethics’. “We’ve actually criminalised it,” says Elkan of obscuring the truth in inquiries, “because we think that will help protect people lower down the hierarchy. It will give them a legal justification for what they’re doing [whistleblowing], but it might also be the first step in changing perceptions as to what’s acceptable behaviour.”

It would also introduce an independent Public Advocate to represent and communicate with victims, actively seeking out and reporting on revelatory information. And it would guarantee victims legal aid, while capping how much money the state can spend on its own legal representation. At the moment, Elkan says, “you see the families going in with one or maybe two teams, and then you see the room is just filled with other teams of government lawyers”.

The vast sums the government spends on its own legal defence is “still the taxpayer’s money”, Elkan stresses. “But because it goes through a government department, not through a legal aid system, it’s not properly monitored.”

A Public Accountability Bill would have deterred the two policemen from staying quiet about Charlotte’s father’s death for all those years. It would have been similarly impactful for the thousands of others who have suffered at the hands of the system.

Jason Evans has undergone a similar fight to the one faced by Charlotte after losing his own father in what’s now known as the contaminated blood scandal. He runs a campaign group called Factor 8, which advocates for the circa 4,000 people who were infected with hepatitis C, or hepatitis C and HIV, after using NHS-sanctioned treatment for blood clotting disorders in the ’70s and ’80s.

Jason has previously recounted being told, on at least four occasions, that his father’s medical records didn’t exist – only for them to miraculously appear two days after the BBC made contact. On further examples of wrongdoing, he tells Huck about the patently false statements that were given by health officials to ministers like Andy Burnham and Jeremy Hunt. “What I’m talking about are lines such as, ‘No one was knowingly infected with infected blood products’ … [and] that ‘a hepatitis C test couldn’t have been introduced any sooner than it was’.”

Former Health Secretary Andy Burnham said 'fear of financial exposure' had been 'embedded' in the civil service's response to the contaminated blood scandal for decades. The needs of those infected were ignored, he said, and they were 'comprehensively failed' by UK governments. pic.twitter.com/zYc3xJa8tE

Jason has all but dedicated his life to forcing the state to reckon with this tragedy. “Having to go through everything that had happened to my dad … from the plasma being collected in prisons in the US, to the lack of good regulation, to the unethical trials on patients without their consent, to how the products were made and distributed … it was all quite overwhelming.” His choice to do this – which has resulted in a “loss of income” and taken a “huge emotional toll” – is one no one should have to make. By guaranteeing a body to represent the public, a fair chance in courts of law, and a duty of candour, the Hillsborough Law would go some way in ensuring no one else has to.

What are public inquiries for? Establishing facts, learning lessons so that mistakes are not repeated, restoring public confidence, and determining accountability, according to a 2022 House of Commons Library briefing. But we shouldn’t forget their function as a listening ear, a tool in collective and individual grieving. They represent one body, the state, actively hearing the voices, frustrations and fears of those it has wronged.

Charlotte knows all too well what it’s like to be sidelined by the state. “It’s like standing in a room full of people and you’re screaming at the top of your lungs and nobody can hear you,” she says. Campaigning for a Hillsborough Law, for her, is about ensuring no one has to go through what she went through. “If I can prevent that or help people or lighten the load in any way, then I will, because I know first-hand what it feels like.”

Jason expresses a similar sentiment. “Growing up without my dad, missing my dad as a kid – that fire’s never gone away,” he says. He wants make sure “people don’t have to go through that same fight”. Indeed, if victims are ever to be able to converse with public authorities as equals, as opposed to banging down doors for decades, it will be via the concrete conditions and provisions outlined in the bill.

At its September 2022 party conference in Liverpool, Labour pledged support for the law. Keir Starmer said passing it would be one of the first things he’d do as prime minister. Hopefully, this will be a first step towards candour, rather than the latest in a series of evasions. Getting those in power to support a law that directly compromises their immunity was never going to be easy, but it will soon be much harder for them to look at the public they represent and resist it.

“The APPG [the All-Party Parliamentary Group for Public Accountability, which is championing the bill in parliament] is very strong, and I think it’s only going to get stronger and gain more support, particularly as we’re going to have this succession now of inquiries reporting,” says Jason, noting the recent inquiries into Grenfell, the contaminated blood scandal and the ongoing UK Covid inquiry.

For bereaved families who’ve suffered for so long, there is indeed reason to be hopeful. As Jason puts it, “The momentum and the exposure this bill can get will really increase its chances of actually happening.”

Linkedin
OTHER ARTICLES
Photographer Jeffrey Silverthorne always treated his subjects – often those living on the margins of society – with empathy and respect.
The photographer describes taking inspiration from Magnum photographers to craft an intimate and revealing portrait of the city.
We sat down with trans comic Jordan Gray to discuss the power of portraying complex characters, giving humanity the benefit of the doubt and getting naked on live TV.
Layna, Maysa and Amaya are three siblings looking to disrupt narratives around the sport. In doing so, they’re hoping to inspire a new generation of skateboarders.
A campaign seeking to prevent future injustices where there is state involvement is gaining momentum, with Labour recently pledging its support.
The demonstration took place this week over plans to slash £50m from arts bodies in London.