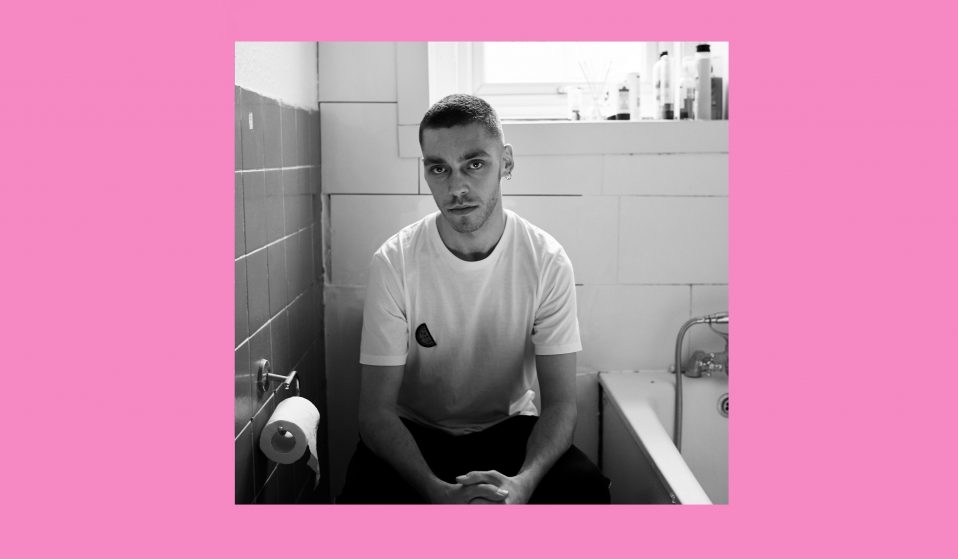 Willy Hudson is pretty sure he’s a bottom.

Functionally, where anally penetrative sex is concerned, this is merely an expression of position preference. For many though, the meaning of the preference goes far beyond function.

It’s in those meanings – the characteristics and stereotypes hung from the respective hooks of top or bottom – that form the subject of Hudson’s first play, Bottom.

The show starts in the bathroom. Hudson is (metaphorically) naked. He’s shouting at his flaccid penis for letting him down. He stares at himself in the mirror, hyping himself up to try again. In his room, across the hallway, sits a man, eagerly waiting to be topped. But, as Willy is pretty sure he’s a bottom, a sexual impasse is reached.

As his second sell-out run at the Soho Theatre comes to an end, and he prepares to take Bottom back out on tour, we catch up with Willy to talk more about the show, what drives it, and whether those labels – top and bottom – have become toxic.

What made you want to write Bottom?
I started writing it two and a half years ago. I had recently moved to London and was partying, working loads of jobs, and having lots of mindless sex. I thought there should be something more.

I did a workshop with a performance artist called Bryony Kimmings and it grew from there. Initially it grew from the question, ‘are you a top or a bottom?’ For me, it wasn’t just a sexual question, it was an analogy for all of the jobs I was working and the life I was living.

Do you think the gay community are obsessed with that question – top or bottom?
There’s a part of the gay community that is obsessed for sure, but I think that it might operate on a more subconscious level. From my experience, it really affected me in a way I didn’t understand until I did the show. I had internalised the misogyny of those labels. The fact that a top should behave one way and a bottom another. That the more masc people were tops and the more femme or camp had to be bottoms.

I had an interesting experience where I did an interview, and loads of people piled in on social media telling me to shut the fuck up, and that I should go suck a dick because people were proud to be tops and bottoms. I think that kind of proves the point of the show – it’s not that we need to dissolve the labels, but everything that goes with them. Their branding provokes such a strong response, that it probably needs talking about.

What do you think is the driving force behind those strong identities? Is it misogyny? Ignorance? Assimilationism?
I think it’s all of those things. It’s something to do with acceptance. Something to do with needing to stay afloat within a community. But it’s [also] internalised homophobia, where we still have to have this hierarchy round ‘stronger’ and ‘weaker’ people, and projecting masculinity and femininity onto positions. There’s a lot of younger people that grow up with those identities and don’t necessarily understand that you don’t have to do that. There are way more options to experiment with yourself – it’s about trying to give people the opportunity to see the other side.

Is the fixation on those identities dangerous?
I think it’s unhelpful. My whole sexual experience was based on me being passive in every way which I think is dangerous. I still get very self-conscious, I still get very nervous. You can pass that complexity on. I would only use the labels now for purely functional reasons. The lesson of the show is that sex isn’t just about those labels. It should be about fun and intimacy and closeness.

In Bottom, there’s lots going on beyond simply sexual labels. It’s a story about the experience of a young gay man in London and delving head first into the city – seeking validation through drugs and sex, about renting, about holding down multiple jobs – do you think that’s fairly true of a lot of people’s experiences?
I would hope so. I don’t want to claim the experience of a lot of those people. But from working those jobs, which I still do, I know that everyone is running 100 miles an hour and if you want to go out and party, you have to fit it in. It’s true of anywhere that’s big, busy and expensive – it’s a real struggle. There are also more millennial problems like zero hour contracts and housing, and it has such a big impact on us all – it feels like you can run yourself into the ground if you’re not careful. There’s no one there to tell you to stop taking shifts, no one to tell you that you need to sleep and rest, particularly when there’s rent to pay. You just end up exhausting yourself which only exacerbates things.

How much do you think those things influence the confusion and the loneliness at the heart of Bottom?
I think Bottom is about the feeling of nothing really going your way – like you’re constantly chasing something, and nothing is ever enough. If you work Monday to Sunday, and you go out Friday, Saturday and Sunday, it grinds you down and affects your headspace. For me, it stopped me making positive decisions, or being aware of the types of relationships I was forming. I felt lucky that I’m now in a relationship with someone that was never in that world and doesn’t drink or take drugs. To see that alternative lifestyle has opened my eyes – I see the world completely differently.

So is there an issue with access to non-sober spaces for the LGBTQ+ community?
A lot of it is about escapism and acceptance. For a lot of LGBTQ+ people, getting wasted becomes a past time, which is hard to escape from. When I was a kid, I was bullied and shunned –  it wasn’t until I went to University and started partying that I actually felt accepted. I think that’s true of lots of people in the community – the fix of drugs becomes something to use to not be in touch with who you are. I don’t take them any more, which isn’t a criticism of anyone that does, it just felt like a dark hole for me. I’m quite an excessive person and they weren’t good for me. I have a similar relationship with porn that I used in the same way that I’m still trying to work through to this day.

So what’s next for you and the show?
We’re still touring Bottom into next year. We did a tour in March with was amazing, but we’re hoping to take it to some other cities that we haven’t been too yet, which is exciting. As for me, I’m going to be trying to make a new show to take to Edinburgh next year, but I’m still not sure what it’s going to be about. I think it might be something of an ugly sister to Bottom, but we’ll have to wait and see!

Linkedin
RELATED ARTICLES
OTHER ARTICLES
Since 2007, Gideon Mendel has made 20 trips to document floods in 13 countries. The result is an alarming record of what has already been lost to the climate emergency.
A recent High Court ruling against the right to wild camp in Dartmoor National Park sparked the largest land protest in history – and campaigners say their fight is not over yet.
Activists and campaigners are fighting back against new laws that would seriously undermine the ability to take industrial action, calling it an attack on fundamental workers' rights.
Photographer Sean Maung reflects on documenting a small town in Pennsylvania afflicted by high levels of unemployment, poverty, violence, crime, and addiction.
A new podcast is opening up the conversation between trans women and trans amorous men in the hope of building coalitions.
Tristan O’Neill’s shots of dancers caught in moments of reverie at the height of rave’s golden age are a testament to the UK’s legendary club culture.