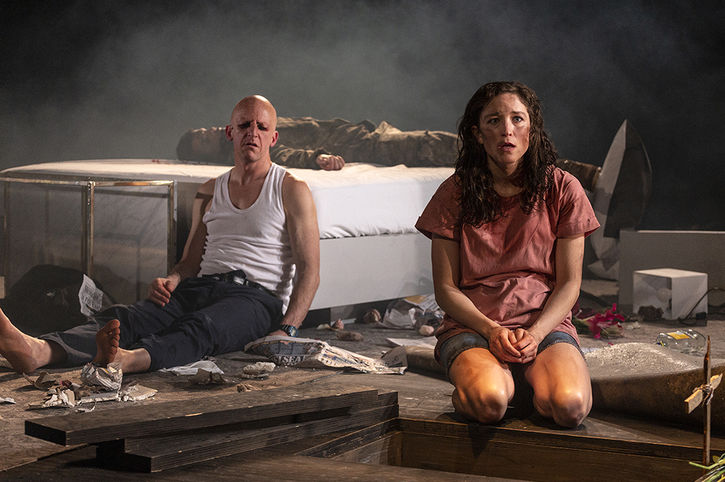 The playwright disrupted the comfort of middle-class audiences, presenting them with a world that was violent, surreal and cruel. Theatre needs more people like her, writes Nathalie Olah.

The playwright disrupted the comfort of middle-class audiences, presenting them with a world that was violent, surreal and cruel. Theatre needs more people like her, writes Nathalie Olah.

By 23, and thanks to the success of her breakout play, Blasted, playwright Sarah Kane was already one of the biggest names in British theatre. Four years later, in 1999, she would be dead from suicide, found hanged in the toilets of Kings College Hospital two days after a failed overdose. The tabloids liked to complain about its shock value, but Kane’s work, which dealt in themes of war, sex, mental ill-health, class struggle and identity, won her praise from the likes of Harold Pinter, Caryl Churchill and a large portion of the critical press. Had she lived, there was every chance of her irrevocably changing the face of theatre and forever imbuing it with a strong sense of disdain and irreverence for the British establishment.

But 20 years after her death, there remains very little evidence of Kane’s legacy in the mainstream programming of most theatres. What few insurgent voices have had the talent and strength to persevere in a climate that has become far more deferential and affluent – among them Bola Agbaje, Michaela Cole, the list is short – have swum against the tide. Today, and in spite of efforts by Kane and those whose footsteps she followed in, theatre remains a squarely middle-class pursuit; a place for the affluent to travel at the safest of distances through any number of social or political issues, without ever being confronted too aggressively with its own complicit role.

Living near Camberwell and walking past King’s College Hospital regularly, I find myself thinking about Kane a lot. I’m not from London and neither was she, and I’m often mesmerized by the casualness with which affluent people from here accept their proximity to fame, and the machinations of a culture industry that still seems in lots of ways otherworldly to me. I’m struck by what she achieved and what gains she made in spite of her aesthetic differences with the theatrical establishment, and wonder how all of this played out against her other mental health issues.

I saw her first play, Blasted on a VHS recording during one of my A-level English classes, a play about trauma borne of the Bosnian civil war and containing several violent scenes that caused a moral furore when they were first staged in 1995. A friend of mine, a Bosnian immigrant, had recently died in a nightclub attack. As shameful as it is for me to say, Kane gave me the first proper glimpse into a life that he had escaped, something we as self-absorbed and stupid teenagers neglected to ever enquire about.

As I got older and continued studying English literature, I always felt offended seeing Kane painted as the enfant terrible of British theatre, with an appetite for gratuitous violence and offence. Given what we now know about the atrocities of the Yugoslav wars, who are we to declare as obscene, the surreal horror and explicit violence of her first play? What better place than the theatre – where tickets are sold at staggering prices, and wine coiffed from plastic beakers – with which to confront the British people about the harsh reality of a bloody war that was happening on the edge of the continent?

In-yer-face theatre, the name given to the genre to which Kane was often slotted, is a ghoulish phrase, parodic in its desperate attempt to summon an authentic and outspoken vernacular. It’s a moniker that seems symptomatic of a time when working-class culture, in particular, was being depicted at the hands of largely middle-class producers and directors in the years that followed, as something that was at best trivial, at worst grotesque – Two Pints of Lager and a Packet of Crisps, Shameless, a host of reality TV and fly-on-the-wall formats being churned out. Kane, though arguably lower-middle-class, stood on the shoulders of a great many working-class playwrights, and represented a high tradition of working-class intellectualism; living proof of what beauty and what complex, erudite and essential work could be produced when those outside of the immediate foray were granted access to the mainstream spaces.

Kane was no savant. She was schooled in playwriting, having studied drama at Bristol and playwriting at Birmingham. The media reception often hinted at Kane being a self-taught outsider figure, instead of the reality: that she was an intellectual of an anti-hegemonic tradition, a scholarly playwright in fact, who showed an enormous depth of understanding for the formal tropes of the genre, splitting and stretching them, and challenging our deeply-held beliefs about what a play, and indeed a story, is, and how it should behave.

The plays would become increasingly abstract throughout her short career: the Self becoming an ever-more elusive entity for which Kane’s writing always yearned. If the first three plays are marked by their candour and extremity, then the two later plays, Crave and 4.48 Psychosis, evolve the tradition of the high modernists, Beckett, Brecht, Kafka – stage directions and dialogue disintegrating in a form that feels glitchy and out of time.

It was morbid at a time when I myself enjoyed being morbid. A teenager growing up in Birmingham and otherwise only exposed to the canonical texts on the school syllabus, she was the first writer who demonstrated to me the possibility for literature to speak in the vernacular, and to articulate the ideas that tallied with my lived experience – as exaggerated in their emotional turmoil as they might have been. At its most sympathetic, the broadsheet commentariat tended to countenance accusations of Kane’s work being preoccupied with shock and awe tactics – said to be inspired by the blood lust of the Jacobean plays – with the claim that she was also a writer capable of enormous, emotional depth. Did they say the same of other auteurs obsessed with the Jacobean genre, such as Tarantino?

The plays held up without that justification. They didn’t need it. Though I was watching and reading her work years after she had passed, Kane seemed to be saying that sometimes the world is just violent and cruel, with no neat way of squaring that or trying to package it in a way that would be more easy to digest, and understand.

Linkedin
RELATED ARTICLES
OTHER ARTICLES
The musician, DJ and founder of Monika Enterprise reflects on a career defined by revolution and rule-breaking.
From Brooklyn gang members, to Welsh miners and the residents of East Harlem, Bruce Davidson used his camera to shine a light on the most marginalised.
Despite the easing of Covid-19 restrictions, the issue of over-policing on university campuses remains.
The novelist discusses his electrifying debut, which offers a deft examination of masculinity under late capitalism.
Photographer Philipp Mueller reminisces on shooting Zurich’s thriving nightlife in an era fuelled by experimentation.
In Sheffield, food delivery drivers are fighting back against one of the giants of the gig economy.