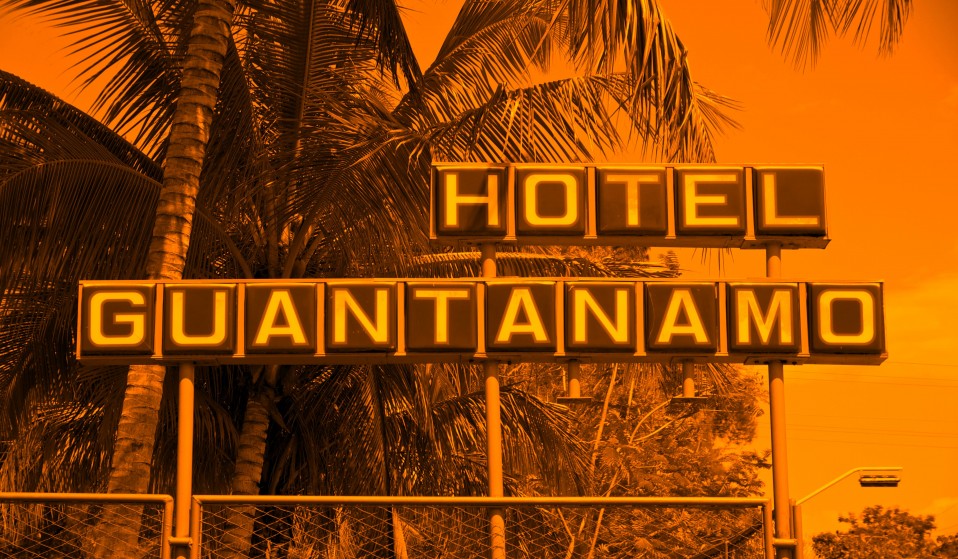 The music of torture in Guantanamo Bay

Enhanced interrogation techniques – a euphemism for torture – have been a controversial topic of debate since it came to light that such methods were being used against detainees in the notorious Guantanamo Bay prison.

Now, theatre company 2Magpies have decided to broach the topic in the form of contemporary theatre in their new play, Last Resort.

Set in an imagined future where a Cuban holiday resort, complete with deck chairs and cocktails, resides in place of Guantanamo Bay detention centre, Last Resort invites the audience to experience some of these techniques in as entertainment, while raising questions of morality and the human condition.

“By using some of these techniques in a different way and in a different context, I think there will be an appreciation of what things could be like if every single one of these elements was turned up to 11, simultaneously,” says the play’s co-creator and co-star, Tom Barnes. “Ultimately, it’s entertainment, it’s a piece of theatre, but I think it will raise questions about a grey area of which, unfortunately, there are no answers.”

Music is one technique that the play will draw heavily upon. “Some songs were used as torture because they were obscene in some way,” Barnes tells me. “That would be heavy metal, like American band, Deicide. One of the songs used was called ‘Fuck Your God’, which must have meant something to the people that chose it but is just a barrage of noise. A lot of it was music that the guards liked to listen to; things that were popular at the time like Eminem and the Red Hot Chilli Peppers.

Others were songs that undermined Islamic values, Christina Aguilera’s ‘Dirty’, for instance. Some things that were just flat out annoying like the Barney the Dinosaur theme song. One which was particularly interesting for us was David Gray’s ‘Babylon’, which was this mum-rock song at the time, but the connotations of Babylon are Ancient Mesopotamia, which is Iraq.”

Barnes and co-creator and co-star Eve Parmiter both have backgrounds in International Politics as well as theatre. They consulted with three International Relations university professors, Amnesty International, the NGO Reprieve, and a variety of artists from different faith backgrounds and art forms, to examine first-hand accounts from Guantanamo Bay detainees.

“The research process has been quite academic but what’s come out of it isn’t an essay or a journal it’s a 60-minute piece of contemporary theatre”, says Barnes. “I think by creating a multi-sensory performance there will be some kind of experience that the audience will have which they wouldn’t get from reading a book or watching a film or documentary about it, it will be more first-hand.”

The multi-sensory experience begins as soon as you enter the theatre. Upon entering, the audience is taken on a disorientating journey to the performance space that mimics the start of the rendition process. Once seated in their deck chairs, the audience is ‘detained’ before a sudden blitz brings them back out into the world.

2Magpies is no stranger to broaching provocative topics. The company has previously produced plays about the poisoning of Russian dissident, Litvinenko, and the controversies surrounding cycling champions Lance Armstrong and Marco Pantani. Last Resort also taps into the public consciousness. “The threat of terror is so on the agenda,” Barnes says. “What happened in Paris and Brussels makes people scared and provokes extreme legislation to come about.”

“There’s a sense of inevitability that there will be terror attacks and that we will have to deal with that at some point and I think asking those questions at a time when you’re not acting in the moment is interesting,” says Barnes.

“Particularly this year as Obama’s presidency is ending – the first thing he always said that he was going to do as president was to close Guantanamo Bay. Two terms later you begin to realise that things haven’t actually changed, why is that? So I think there’s a wider picture of how we deal with the threat of terror. And I hope the audience will come away asking some of those ethical questions that we’ve been asking ourselves during the creation of this play.”

Last Resort is being shown at The Lowry in Salford on 6 and 7 May as part of Week 53 arts festival, and at The Southbank Centre in London on 9 May.

Linkedin
RELATED ARTICLES
OTHER ARTICLES
Max Miechowski reflects on documenting land that is being lost to the sea – and the people who live life on the edge.
Alternating between colour and black-and-white, the photographer chronicled sexual liberation, economic crises and the repercussions of the war in Vietnam.
In North Carolina, people are living near to Duke Energy’s Belews Creek Steam Station, where toxins are pumped into the air, water, and soil.
Photographer Jeffrey Silverthorne always treated his subjects – often those living on the margins of society – with empathy and respect.
Ireland’s national sports are modernising. At the forefront of this movement is Na Gaeil Aeracha, the country’s first ever queer GAA club.
Hackney Bumps is a DIY sanctuary in the heart of East London, home to a thriving diverse community of skateboarders – and beyond.