Art & Culture / A thriving skateboarding scene is emerging in Palestine

Epicly Palestine’d: The Birth of Skateboarding in the West Bank meets the local skate pioneers helping to build a scene from nothing.

Epicly Palestine’d: The Birth of Skateboarding in the West Bank meets the local skate pioneers helping to build a scene from nothing.

When British skaters Theo Krish and Phil Joa arrived in Palestine, they had no idea how vibrant the West Bank skate scene would be. Hampered by limited infrastructure, access to equipment, and travel and other restrictions imposed by the occupying Israeli army, Palestinian skaters have to deal with more barriers than most. The scene is still in its infancy, with the oldest boys in the game having clocked up just two years of skating, but slowly it’s blowing up.

Theo and Phil never set out to make a film, but meeting local skaters and hearing their stories had such an effect on the pair that it convinced them to turn the interviews and skate footage they shot into a documentary. Epicly Palestine’d: The Birth of Skateboarding in the West Bank picks up the story from the very beginning and introduces the early pioneers who helped build the local scene from nothing.

Aram Sabbah and Adham Tamimi from Ramallah were, as far as anybody knows, the very first Palestinian skateboarders and Aram’s story illustrates the unique challenges facing local skaters. After picking up skateboarding from a traveller passing through the West Bank, he progressed as quickly as he could, being slowed down when he couldn’t replace broken boards. But skateboarding nearly came to an end all together when he was shot in the leg with a live round at a protest against the IDF’s occupation of Palestine. Desperate to get back in the game, he even skated while on crutches, but after a long recovery he’s now fully back on his board.

NGO SkatePal have been crucial in allowing the scene to grow and founder Charlie Davis features in the film. With a similar model to Skateistan, they ship donations of much-need skate equipment out to Palestine and are currently raising funds to build their third skatepark, this time in Nablus.

We caught up with Epicly Palestine’d directors Theo and Phil to find out more about their film and the West Bank skate scene.

How did you guys get involved with SkatePal? Why do you think it’s an important project?
Phil: When we were planning our trip, I contacted Charlie Davis who runs SkatePal, to ask him about taking stuff over. By chance he was gonna be in Palestine at the same time so we agreed to meet up.

Theo: We were really impressed by SkatePal’s work over there and so Charlie became a character in the documentary. We’ve been helping him out since then by putting on fundraisers back in the UK. I’m also heading back to Palestine in September as a volunteer to help build Skatepal’s next skatepark and do some teaching. It’s a great project and SkatePal have been so important in supporting the scene in its early stages. 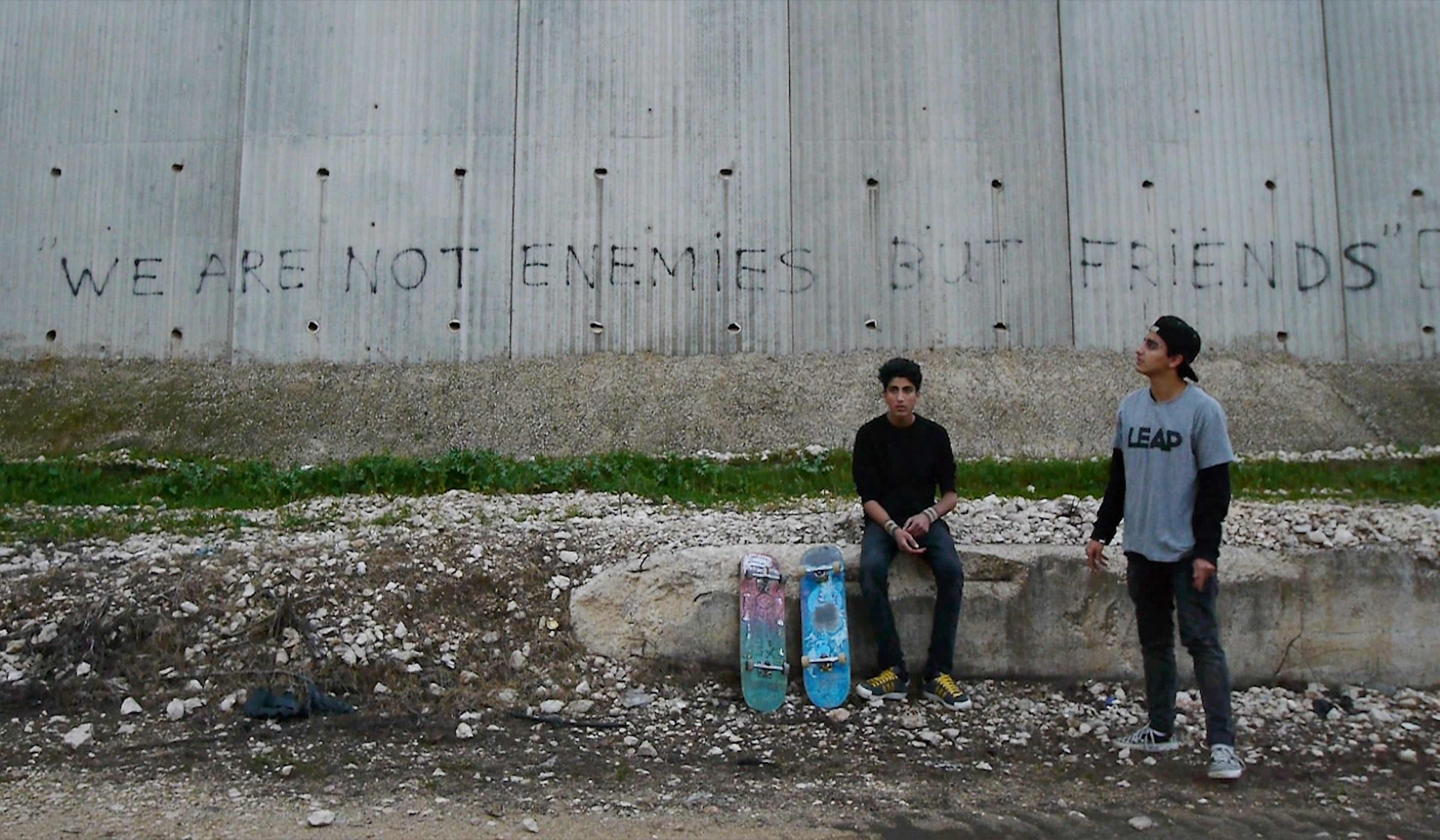 What are the issues Palestinian skaters have to deal with that skaters elsewhere in the world don’t?
Theo: Well a pretty big problem is that you can’t buy a skateboard in Palestine! You can find toy ones in some shops but for the most part the guys are entirely dependent on donations from outside.

Phil: Obviously the biggest issue that affects all Palestinians, not just skaters, is the occupation. It has a huge impact on just about every aspect of life there, including freedom of movement. So the skate spots might only be a few miles from your house, but if the Israeli army decide to close the road or put a curfew in place, you aren’t going anywhere. 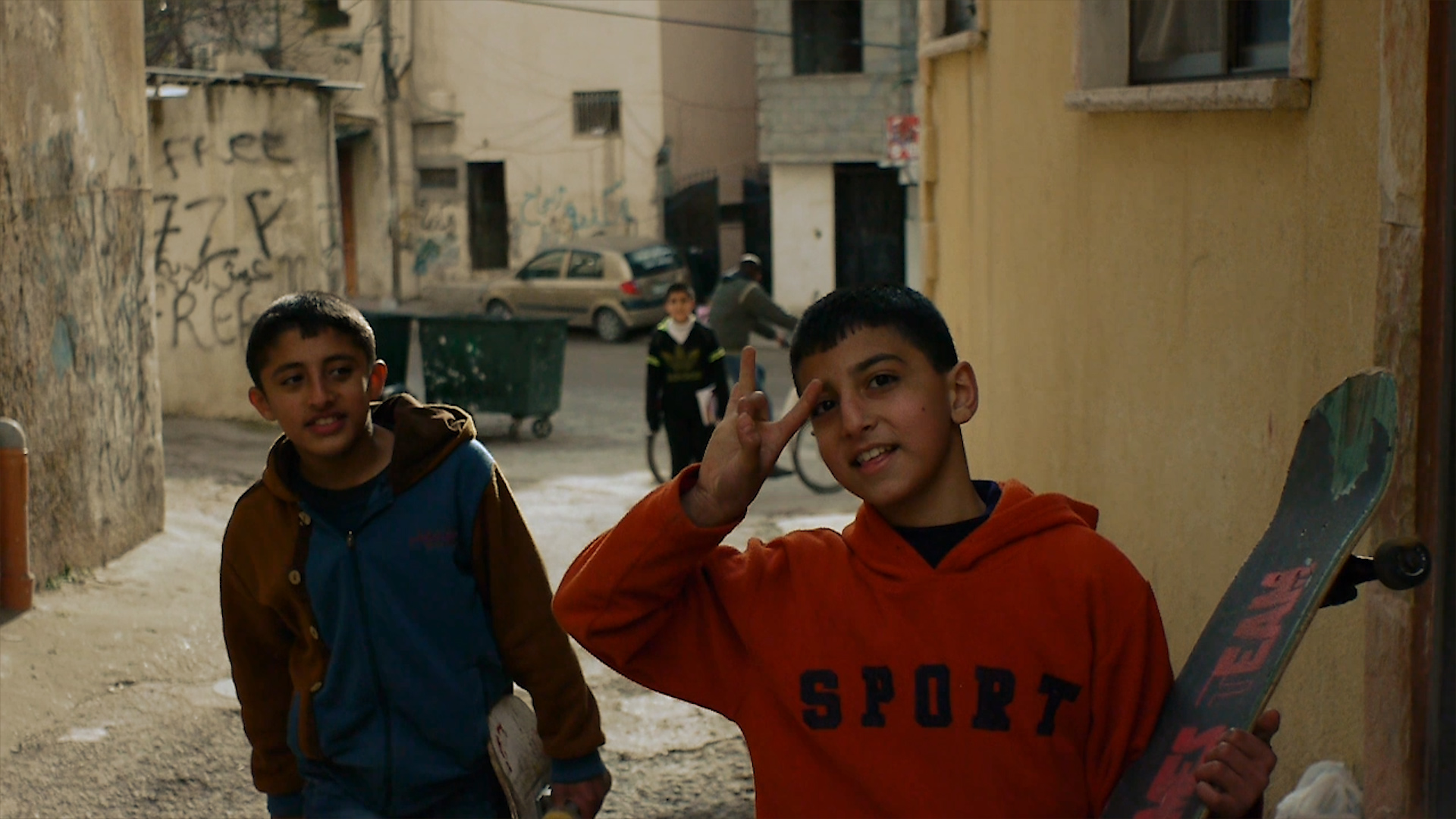 Could you briefly sketch out the history or skateboarding in the West Bank? How does it contrast to the story in Gaza – is there even a scene in Gaza?

Phil: I’m not sure really. There’s a massive parkour scene in Gaza. I’m sure there are skateboarders too. I did hear about a mini ramp being built a while ago but I don’t know if it’s still there. I’d love to find out.

Theo: As for the history of the scene in the West Bank, the first Palestinian to ever get into any kind of skating was Sajed Abu-Elba. He’s a rollerblader, and he was the first person to build ramps and a place for skating. That was before skateboarding took off. The first Palestinian skateboarders were Aram Sabbah and Adham Tamimi, from Ramallah. They started just two years ago.

Phil: There was another guy called Ibrahim who started around the same time but he’s stopped skating and does body building now! 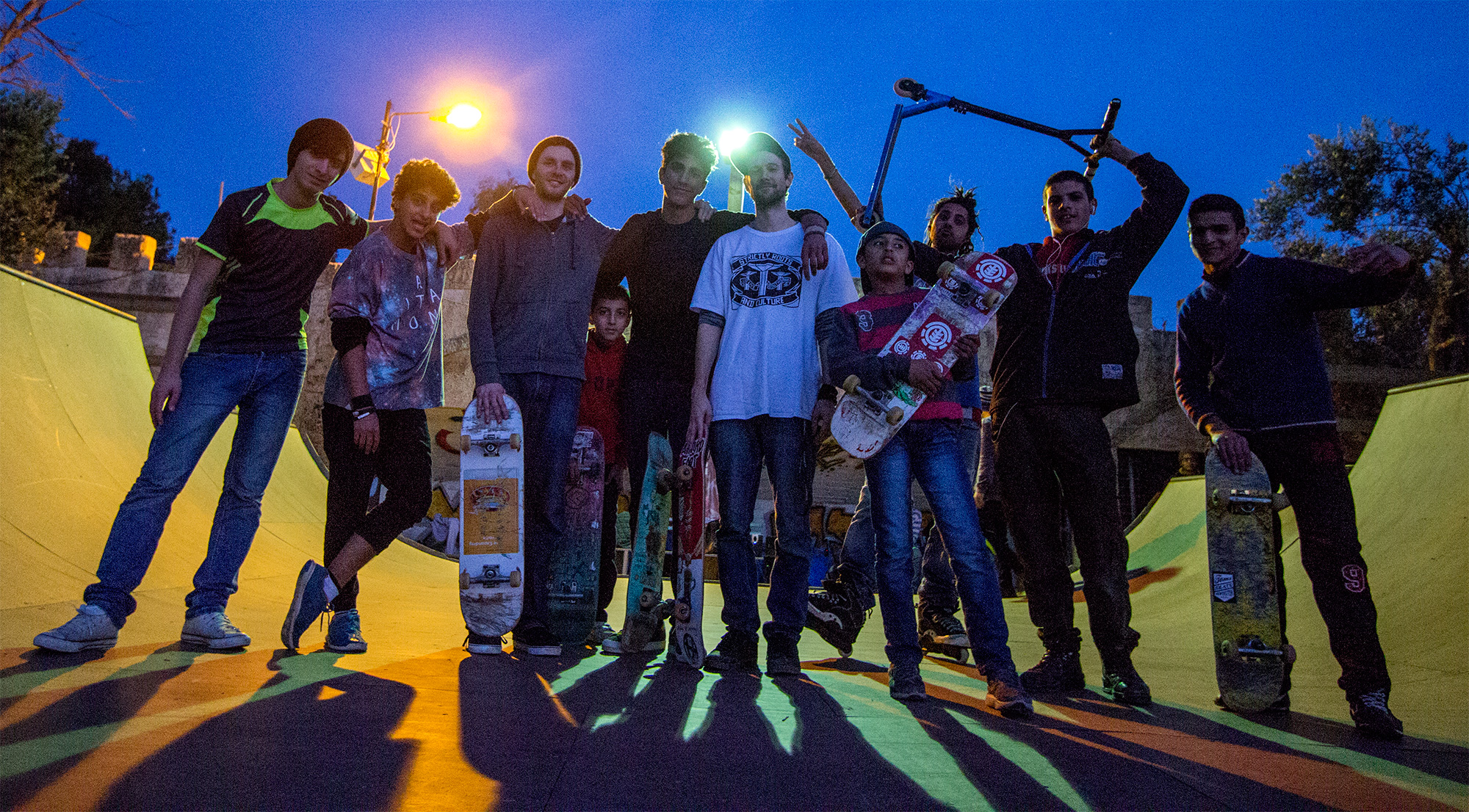 Where does Epicly Palestine’d pick up the story?
Phil: From the start. It goes into how the guys there got into skating, how they progressed given the circumstances, and where it’s at now. As I say, it’s only been two years for the most experienced skaters in the country, and as little as a few weeks for some of the kids we met.

Who are the most important characters in the West Bank skate scene? How did they get involved with the film?
Phil: All of them! It’s such a new thing and the scene is still relatively small, so they all got involved in the film.

Theo: Yeah, anyone who skates and has gone to the West Bank has probably met all the characters in Epicly Palestine’d. They’re like mini celebrities. Everyone knows them. 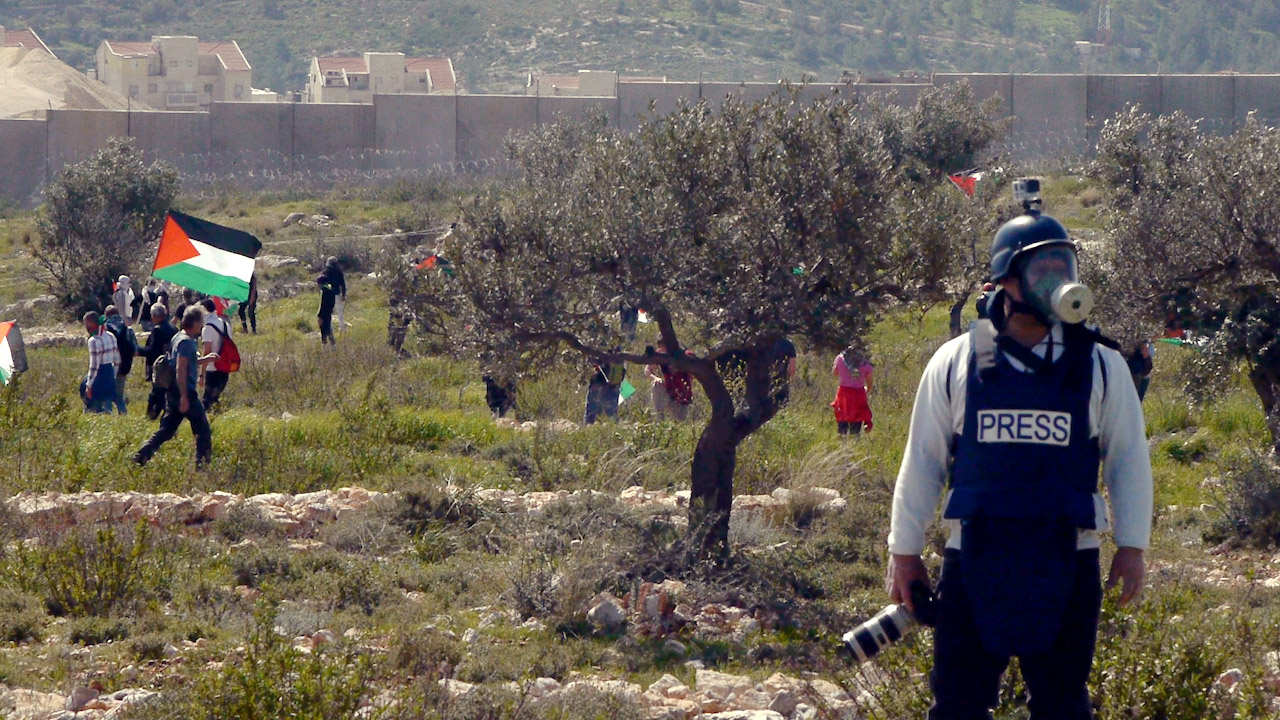 Were there any personal moments that particularly stood out?
Theo: The whole bloody thing! When we were in Nablus we met a kid called Osama. We skated with him all day and he invited us to his family’s restaurant. They gave us dinner and then we had a game of S.K.A.T.E (a truly universal game!) right there in the restaurant with people eating meals around us and filming us on their phones. They loved it!

Phil: When we met Osama, he’d just got his first real skateboard. He’d been skating this cheap toy deck for months and he was so excited. I can’t describe the feeling I got – I just thought, ‘Wow, we’re really here at the beginning of it all.’ 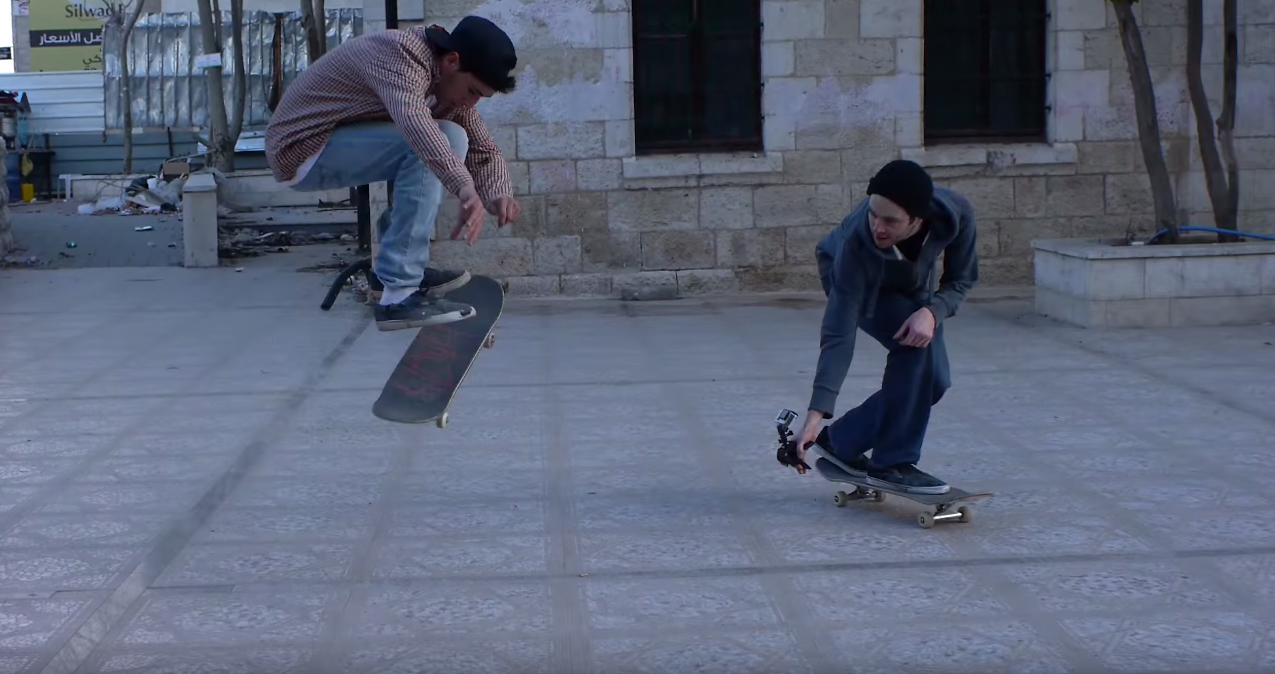 What were the biggest challenges?
Theo: The main challenge was trying to get enough footage of everyone. Sometimes we would be going skating somewhere, but the kids would be at school or have exams. They were obviously also cautious about skating anywhere near checkpoints or the IDF, which is pretty much everywhere.

Phil: It was tricky. We went there to skate and meet people first, but at the same time we were trying to film things like interviews and get enough footage. We did everything DIY – we didn’t have expensive equipment or anything, but it was still difficult to straddle that line between being a ‘filmmaker’ and ‘actually being there’.

Theo: But on the whole it was great. Skateboarding is received pretty warmly around the country (it’s so new, people don’t know to hate it yet!) so everywhere we went we were welcomed, and the skaters themselves are just psyched to meet other skaters from other countries. 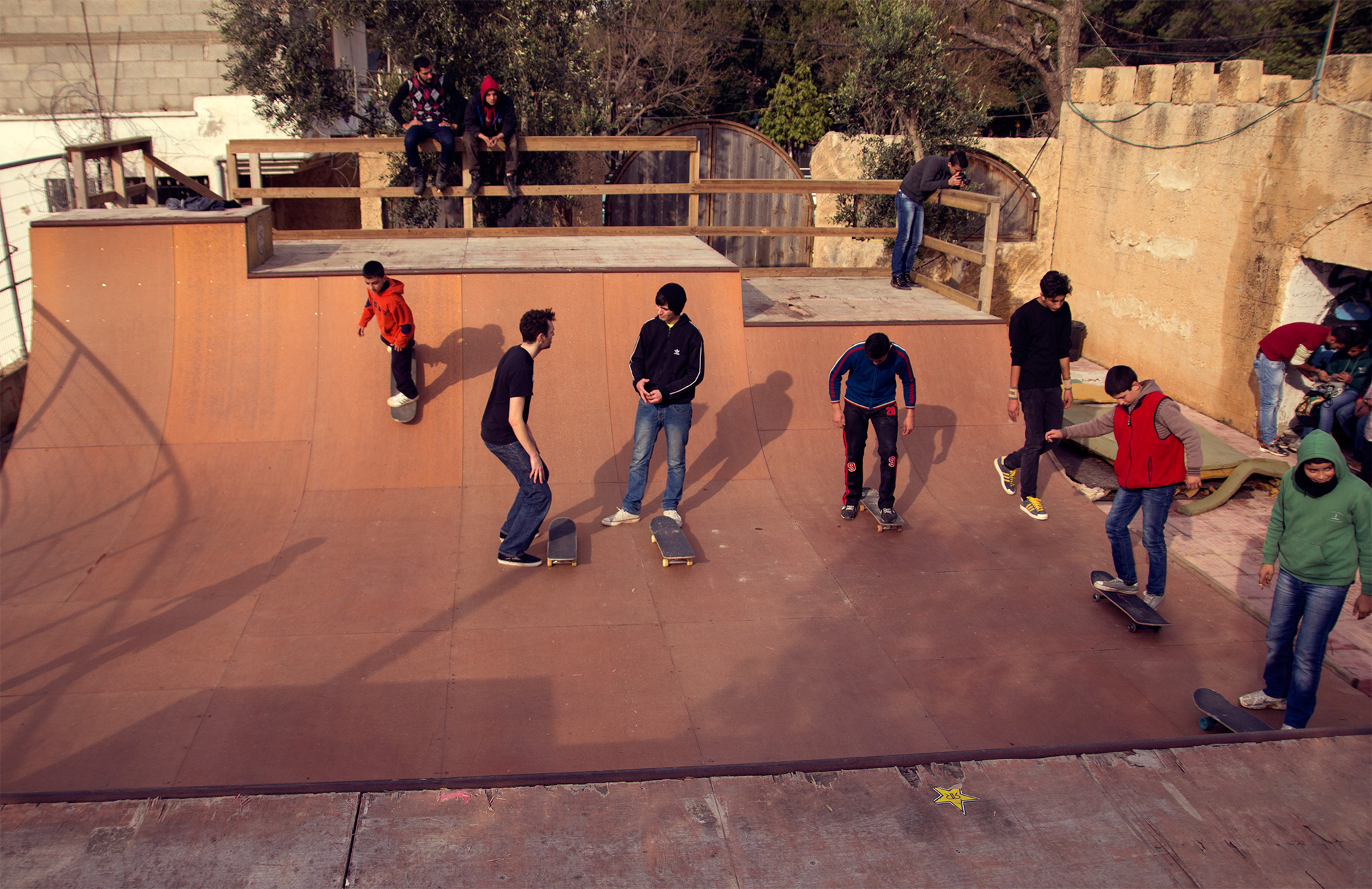 What have you learned from the experience?
Theo: I learned how to say ‘strawberries’ in Arabic.

Phil: I learnt how you’re supposed to make a documentary!

Skateboarding is such a great way to connect with people from all over the world, and like anywhere, the skate scene in the West Bank has its own unique personality. Hopefully the film captures that.

Find out more about Epicly Palestine’d.

Linkedin
RELATED ARTICLES
OTHER ARTICLES
A series of photos by the late Jerry Dantzic taken in 1957 show a tender side to the iconic Jazz musician.
The government’s brutal crackdown on NGOs has left victims of rape without anywhere to seek help. And now, as the country plays a key role is Russia’s war, things are only getting worse.
Photojournalist Fiora Garenzi spoke with people still living in Eastern Ukraine, an area which seen some of the heaviest fighting since the war began.
RaD was inclusive, underground and unapologetically British. Almost three decades after it ceased publication, the people behind its success remember its influence.
Photographer Jack D. Teemer travelled through US cities to create a vivid document of a region in decline.
A new series of photos by Johny Pitts shines a light on communities and subcultures that have all too often been overlooked.