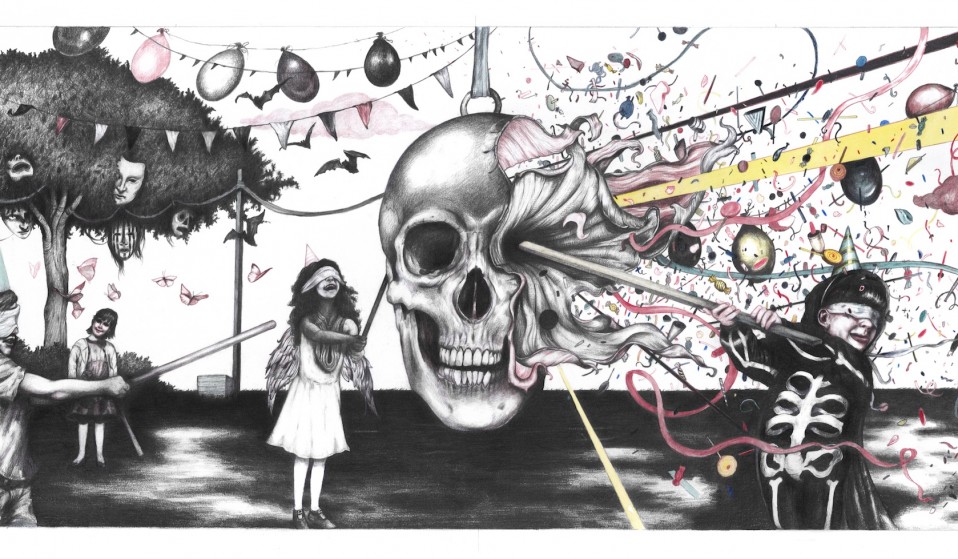 Illustrator of all things beautifully dark and beastly, Tim Lane is currently producing his second hardback publication. Here he talks to Huck about his disdain for the ‘amalgam of crap’ that is modern art, and his desire to create images which are not just aesthetically pleasing, but have a philosophical meaning too.

As soon as you glance at one of Tim Lane’s illustrations, it’s like you’re being pushed down a rabbit hole, only to find your very own existential crisis sitting their waiting. Drawing the bulk of his inspiration from archaic texts like Dante’s Inferno and Grimms’ Fairy Tales, when Tim puts pen to paper it’s a true labour of love.

His works are a flurry of intricacy, laden with a beautiful, sinister darkness. In a world where digital art and easy-to-digest images are rapidly taking over the illustration scene, the sheer complexity and skill involved in Tim’s drawings is a much needed breath of fresh air for his rapidly growing audience. With his second book, Silent Quarter, currently in the works, Tim is eager to fuse contemporary issues with classical artistic techniques, and has a desire to bring back the romanticism of illustration into the modern world.

When did you start drawing these kinds of illustrations?

When I was younger, drawing was quite a cathartic thing for me. First drawing from my head, and then I did a lot of copying when I was very very young, learning the trade. Later, as I got older, I went on to having more self expression and bringing darker elements into my work. 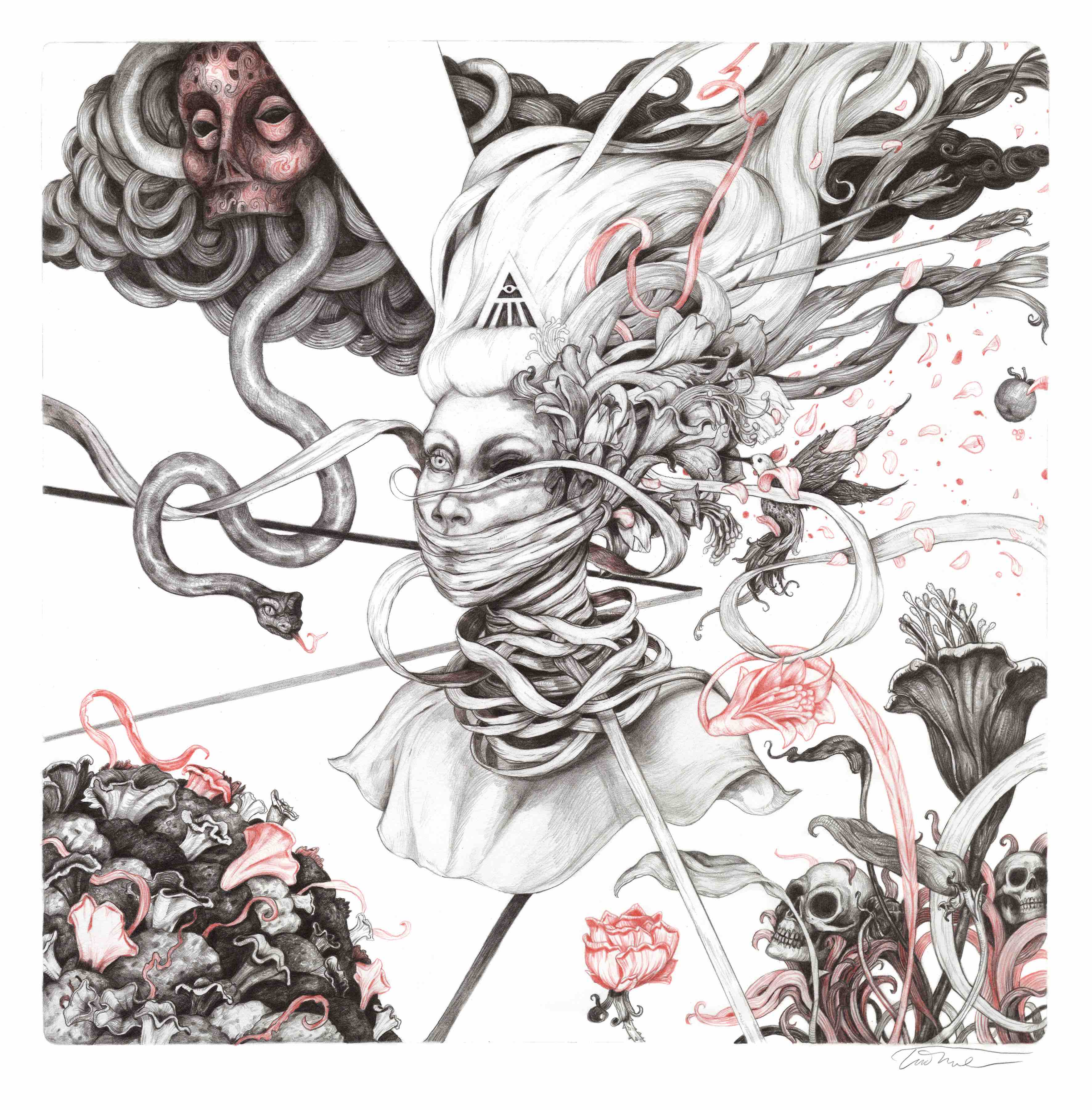 Would you say that your art is a hybrid of classical techniques and your own personal style?

Exactly! Inspirations come from Albrecht Dürer, Gustave Doré, those sort of people – Hogarth too. They are quite illustrative in their style, and dark in their subjects like Dante’s Inferno – I love it. It’s all quite old fashioned really but, I think that it’s all still quite relevant. The ability to have these skills was very much respected back then, and I believe in that. These things take a lot time, people have invested their time and their efforts, and put love into it.

Is that something that you are trying to recreate in your art?

Yeah, I love the tactile nature of drawing on paper. People are good at all the digital stuff, but it has a sort of coldness that I’m not into – both in the making and the end result. It’s like ‘oh, it looks just like pencil’ and then I think ‘well why can’t you just use a pencil?’. It’s the kind of, going wrong and rubbing it out, struggling with it, that has disappeared from drawing. There’s something about all that toying with it. It’s quite a romantic idea but I like thinking of drawing in those terms still.

What elements of classical artistic techniques inspire you most?

Dualism is a big one – I like the idea of the cycle of life – light and darkness, good and evil. It’s all relevant to human nature, even today. I think still we need that in a world of computers, because the human condition doesn’t change. We should have more discussion about these things in popular culture – these philosophical ideas that you get from classical myths and ways of understanding the world. 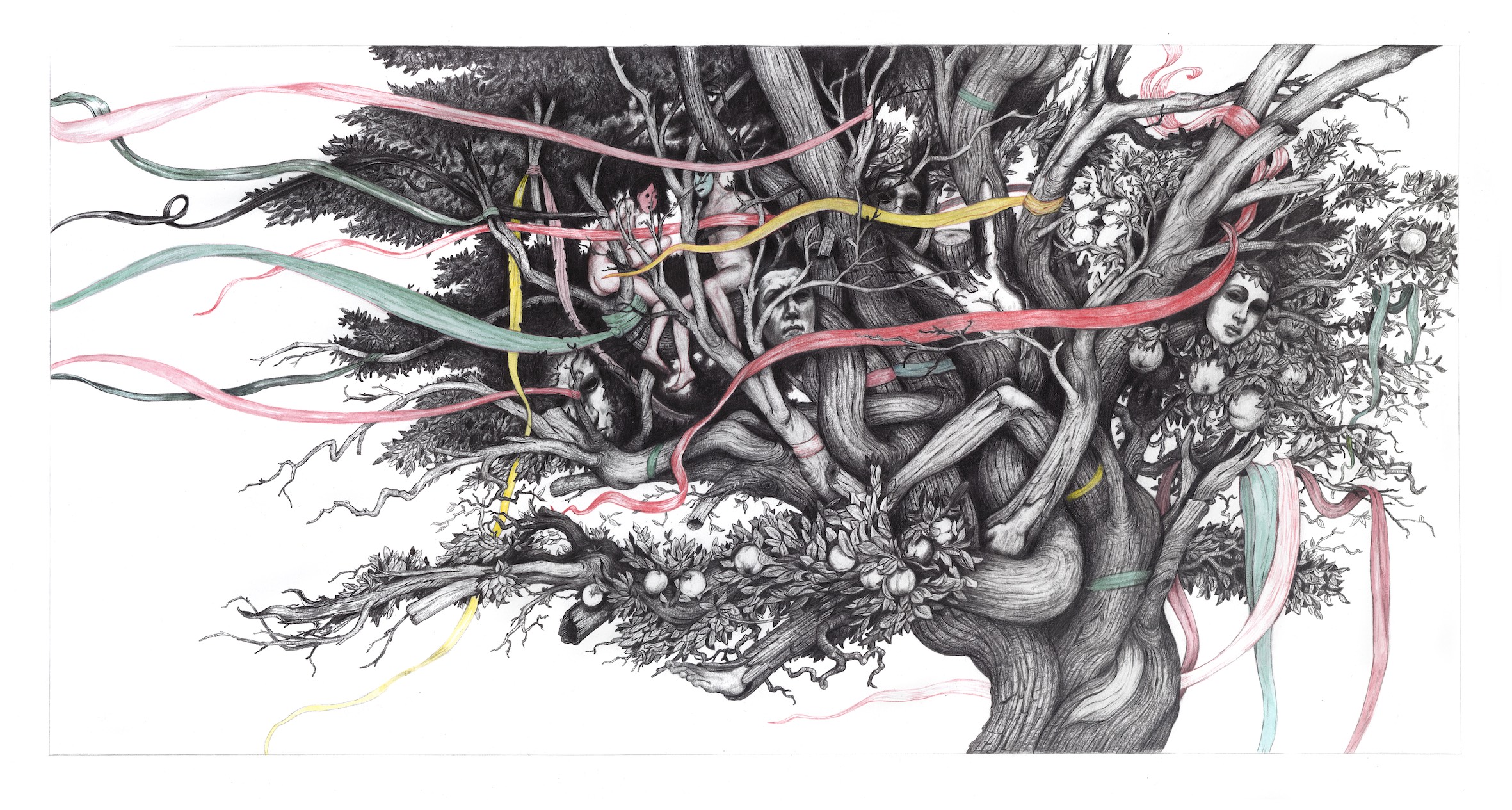 I’ve heard that you’ve got a lot of tattoo enthusiasts who have had your work inked onto their body.

One of my very good friends has one of my works tattooed across the whole of her back, which was a very nice thing to do. But I’ve had people from places like Denmark, who email me asking if they can use my like my pictures on their backs or their legs. I think they like the drawings because of the style – it transmits quite well into tattoo’s. But also, they are quite figurative, and then I suppose those people who are into dark tattoo’s would like my work, like there are a lot of skulls in my work. 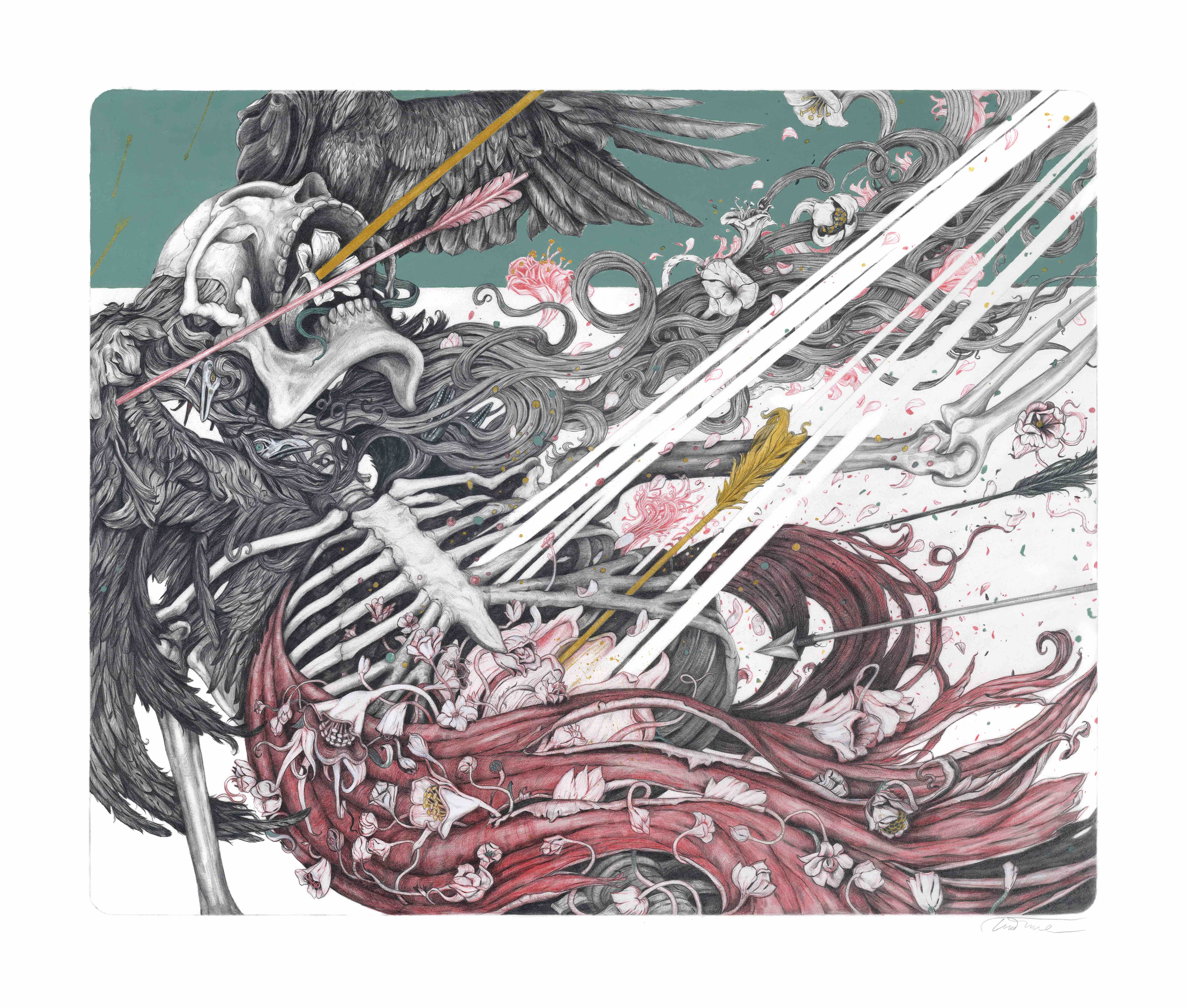 You use a lot of techniques borrowed from older illustrations, but does your upcoming publication, Silent Quarter, have any relevance to the modern world?

I did try to make it relevant. There is a sort of comment on modern life in it. The narrative is based in a modern world, but one which still respects ancient ideas. A lot of modern art – it’s just an amalgam of crap that doesn’t mean anything. I mean, not always, I will try and be fair here. But I tend to think, ‘what’s the message’? Art used to be made so that everything could be read, and was made to be read. Not just like, ‘oh, yeah that’s a nice design’. 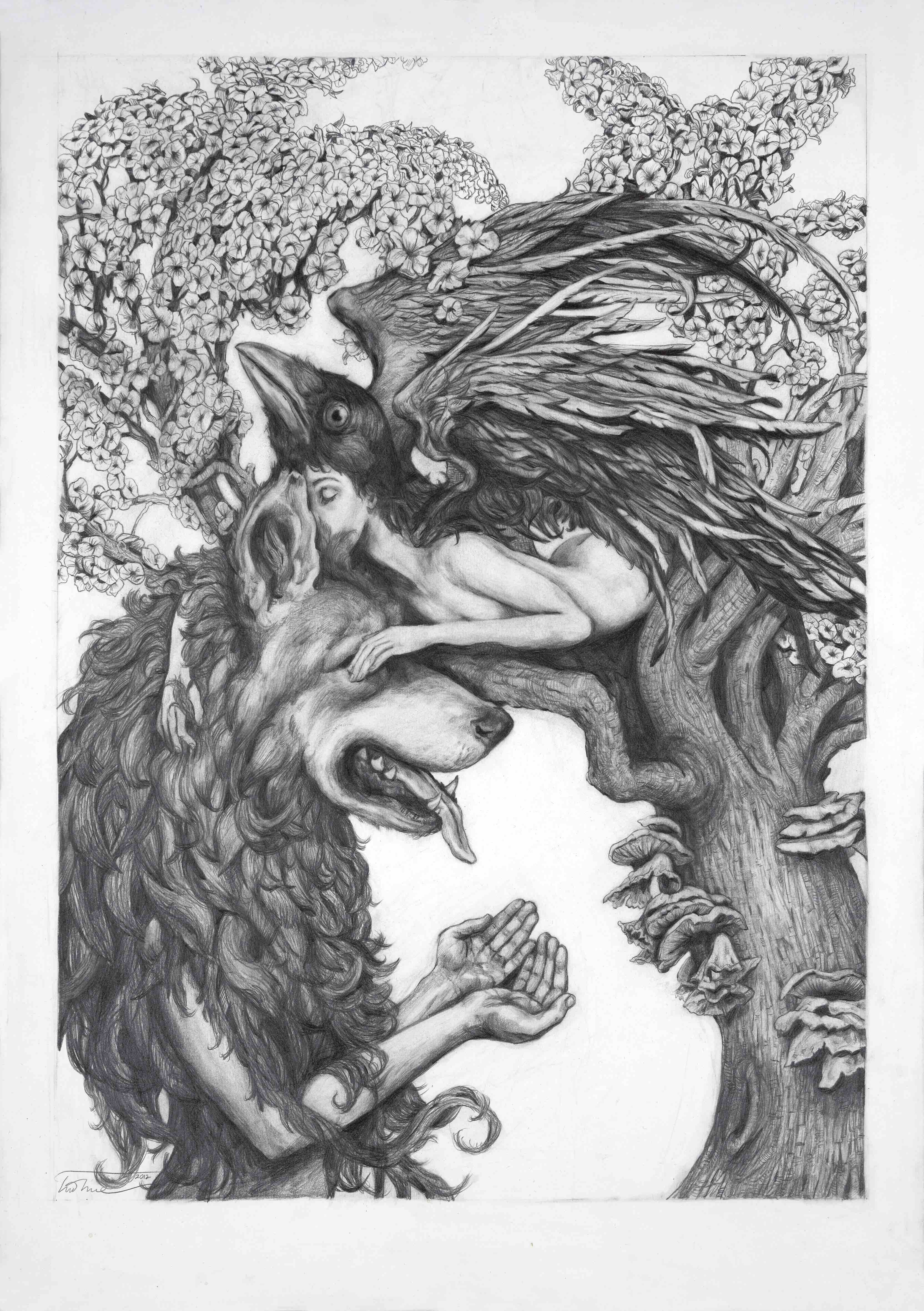 Does your work try to act as an antidote for how disenchanted you’ve become with so much work?

Yes, it draws back to a moral message and a dialogue which is created between the reader and the artist. It’s not just a fixed thing, the art is there to be read how you want to read it. There is a dialogue to be had. You can reflect on it, and take time out to do so. It’s time for people to take a bit of a step back in this day-to-day rat race, and take time to think about life again.

I knew that I didn’t want to just be an illustrator. Sometimes I like to write what I want to illustrate, and then bring it all together. When writing some bits and drawing some bits, I can leave people to engage between the lines for themselves, rather than just being spoon fed. It’s like when people watch a film and say ‘what was that about?’, and I think ‘what does it mean to you? It doesn’t matter what it really means’. You don’t need to have a set out answer.

Check out the Kickstarter page for Tim Lane’s new book.

Reddit
RELATED ARTICLES
OTHER ARTICLES
When limiting our thinking to what’s ‘sensible‘, we play right into the hands of those upholding the status quo. A better future is possible – we just have to dream bigger.
With a haunting new composition for a feverish new film, the British disruptor is back doing what she does best – smashing boundaries, breaking new ground.
Writer and photographer Peter Brooks braves the heckles with the most enigmatic faction of the Extinction Rebellion uprisings.
With his new record 2020, the Newcastle songwriter is looking to the (close) future; a world of dead-end jobs, bigoted butchers and retractable extension leads.
In a new book, KK Ottesen profiles 40 US activists who have dedicated their lives to the fight for human rights.
By prosecuting those who harm the planet, individuals would finally be held to account – a victory that would change everything.