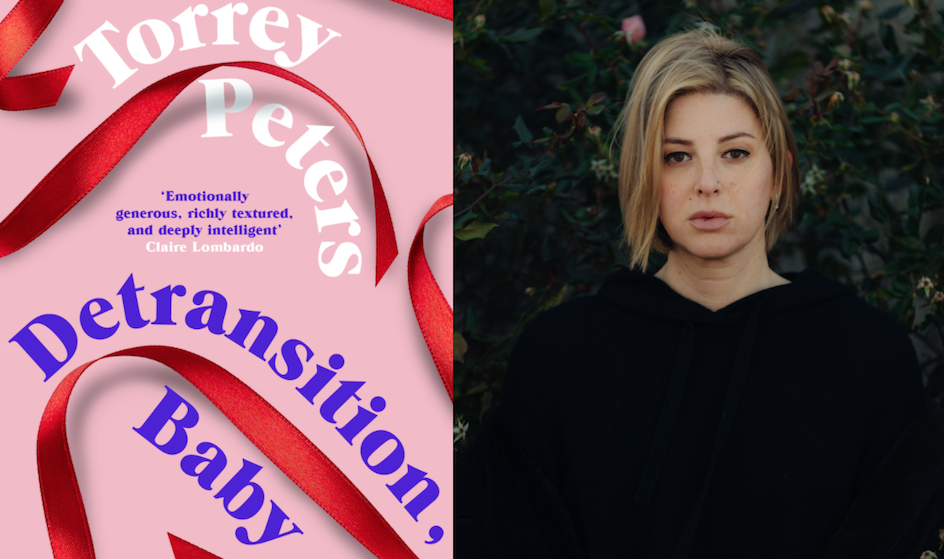 The Brooklyn-based author talks to Huck about her groundbreaking debut novel, a kaleidoscopic social comedy which fearlessly navigates taboos around gender, sex, and relationships.

The Brooklyn-based author talks to Huck about her groundbreaking debut novel, a kaleidoscopic social comedy which fearlessly navigates taboos around gender, sex, and relationships.

Torrey Peters’ debut novel, Detransition, Baby, introduces readers to Reece, a trans woman in her late-30s who yearns to be a mother. Her de-transitioned ex, Ames, offers her a peculiar chance at the thing she has long coveted when he reveals that his boss, Katrina, a divorced cis woman fighting her own battle with heteronormativity, is pregnant with his baby.

Detransition, Baby is a liferaft in a flood of inhuman think-pieces about transness. As Peters tells me, “Fiction goes around a lot of parts of the brain. You feel your way through fiction, rather than think your way through fiction. I think that when people feel their way with a character then something in them changes, and the idea of crudely and coldly talking about what someone ‘is’ in an op-ed rings hollow.”

In that respect, Detransition, Baby achieves brilliance. My fellow trans friend confessed to me that she almost doesn’t want cis people to read it, because it would give them a level of insight into her that she isn’t ready for. I can see what she means. I have yet to read another novel that reads as close to a WikiLeaks dump of my private fears and vulnerabilities.

Still, Peters is clearly speaking to more than just the trans experience, and I suspect that readers – trans or not – will recognise an uncomfortable amount of themselves in the book’s central trio. In a conversation with Huck, Peters discusses how her understanding of ‘transness’ evolved while writing the book, embracing fetishises, and juvenile elephants.

Why did you write Detransition, Baby?

I was in my mid-30s, and I was like: ‘How do I actually want to live, how do I find meaning?’ And for me, it turned into a conversation between trans women and our potential role models – whether that’s trans women from previous generations, whether it’s cis women, whether it’s womanhood in general. A novel actually seemed to be a place to have that conversation honestly, without a lot of the concern one normally will have trying to do it on social media.

One thing you said that interests me is the idea of role models, and trying to reconcile this generational loss that a lot of trans people experience by not having them. How did your perspective on that evolve as you wrote the novel?

I use juvenile elephants whose mothers have been poached in game parks as a metaphor for young trans women and how we didn’t have anybody to teach us how to socialise. I started talking about that metaphor and that metaphor itself evolved. I told it to some Latino trans women in Brooklyn that I’m friends with and they were like, ‘That’s not how it is for us, we’re immigrants. We came here in groups. We had to have family ties. We had to have role models.’

I think the people who would have looked like me and lived a lifestyle like me a generation ago went stealth: they passed from HIV, they had substance abuse problems, and they didn’t have community in the way that we have now. I think that Latina girls did have community, for instance, but the white, previously middle class, American trans woman disappeared. An understanding of why and how they disappeared really got refined over the course of this novel, and I realised that part of the reasons that they disappeared was their own prejudices.

Did your understanding of transness and what it means to be a trans woman also evolve as you wrote the novel?

There’s a long dissociative sex scene in the book, and for a long time I understood that experience as trans. I still think there is a kind of trans valence to it, but the more I talked to other people, the more I realised that there are all sorts of ways to be alienated from your body. I realised that there are a lot of cis women who can read that and basically be like, ‘I’ve experienced that.’ And so what’s changed, I think, is I’ve become much more open to putting transness in conversation with other experiences.

It’s similar with divorce – this book is dedicated to divorced women. In some ways, the pain of transition resonates really closely with the experience of divorced cis women who have to start their life over. So asking: in what ways is that pain a trans pain? And in what ways is that the pain that everybody goes through when there’s like a jarring break in their life?

The fourth main character, who doesn’t have any lines, is the baby. Maybe not so much in the baby as a fully formed character, but in the potential the baby represents. Why write a baby?

The baby becomes an abstract concept of: ‘What can this baby do for our ideas of ourselves, what can this baby do for our identities, what does this baby mean about who we are?’. And then there’s a moment where, I hope, the book gives personhood to that baby, and when that baby becomes a fourth character, rather than a concept for what it means to be a mom, the ethics and the meaning of the whole thing shifts, and suddenly, that’s actually when new reasons to make a decision come into play.

Some of the themes were so honest – sexuality, fetishes and detransition – things that trans people don’t feel able or ready to express because it almost feels like ammo for transphobes. Did that worry you at all?

It worried me in that I worried about trans women being hurt by it. I don’t worry about giving transphobes ammo, because they’re gonna find ammo no matter what.

The problem is that trans women themselves are believing them. They’re tapping into a kind of shame that trans women feel. So why are people afraid to talk about this? Because they’re ashamed that they have fetishes, they’re ashamed of their sexuality. Shame is usually what you’re afraid to speak. So the way you get rid of shame is you speak it. You speak in therapy, you speak with your friends, you read about it, and you realise that: ‘Oh, this actually is a very common experience.’

It seems like Katrina, cis, and Reese, trans, often misunderstand each other. Not only in relation to motherhood and their access to it, but also in terms of race. Reece doesn’t quite understand Katrina’s life as an Asian woman. How central do you think this tension is to the book?

It became more essential as I was writing, like I said with the juvenile elephants. The process of writing was the process of further realising not just what my womanhood meant to me, but what my womanhood meant to other people. I didn’t transition to be a woman, I transitioned to be a white woman. What I transitioned into isn’t isn’t the same thing that an Asian woman would transition into, or a Black woman would transition into, and the ways in which my opportunities, and my even daily existence, are bound by that sort of thing became more and more apparent to me.

Instead of trying to represent every other trans woman’s experience, I’m hoping that a lot of the work that this book can do – in the same way that I hope Katrina points to cis experience off the page – is point to what’s missing in the book, and the fact that this is a white book in a lot of ways. And when you [the reader] feel the fact you’re reading about white womanhood, you also feel: ‘What other womanhoods are out there that I’m not reading?’ And then you look for those voices… But if my book is in a line of books by trans women talking about different types of womanhood and their experiences, then it really is a beautiful macrocosm.

I’ve never heard an author say that a goal of theirs was to create an absence that encourages the reader to go elsewhere. I think that’s really great.

I don’t think that trans women of colour are looking for me to try and write the definitive story of their experience. There’s a basic fundamental respect that has to be written, but I know lots of trans writers who are extremely talented and their books should be read, and they don’t need me to tell their story.

Which trans writers are you excited about?

One of my favourites is T. Fleischmann’s book, Time Is The Thing A Body Moves Through. There’s a great book that is in the UK, and which I so hope gets picked up in North America, which is Lote by Shola von Reinhold. I loved that book. It was the best of dandy writing in a new way. Summer Fun by Jeanne Thornton is coming out this year. Darryl by Jackie Ess is going to come out on Clash Books in the US. Rivers Solomon has a new book coming out. There are so many books out; it’s a lucky time.

What’s next for you?

I started doing a screenplay for Detransition, Baby for a pilot, so we’ll see if that happens or if it becomes a series, which would be exciting, but also I try to remember that the thing I really love is writing prose. My next book is a queer financial thriller, which are not common words that go together, but I want to do The Great Gatsby meets Breaking Bad meets sex work and blackmail.

A lot of big themes!

I like to swing for the fences and then slowly figure it out. But right now I’m like: ‘Yes! Big!’

Detransition, Baby is out now on Serpent’s Tail.

Linkedin
RELATED ARTICLES
OTHER ARTICLES
As the Scottish government announces a rent freeze, an activist with Living Rent who fought and won shares how they did it, and what must come next.
A group of young Palestinians have found temporary freedom in the act of parkour, reimagining wreckage and ruins as a series of high-octane playgrounds.
The two-day long event returned to London this year, showcasing a spectacular parade, steel bands and Caribbean food.
Thousands attended the annual event this year to wheelie through the city and call for ‘knives down, bikes up’.
Rhiannon Adam spent three months capturing an ageing society wracked by division, isolation, and the aftermath of scandal.
A new project is documenting formerly incarcerated people as they transition back into civilian life.