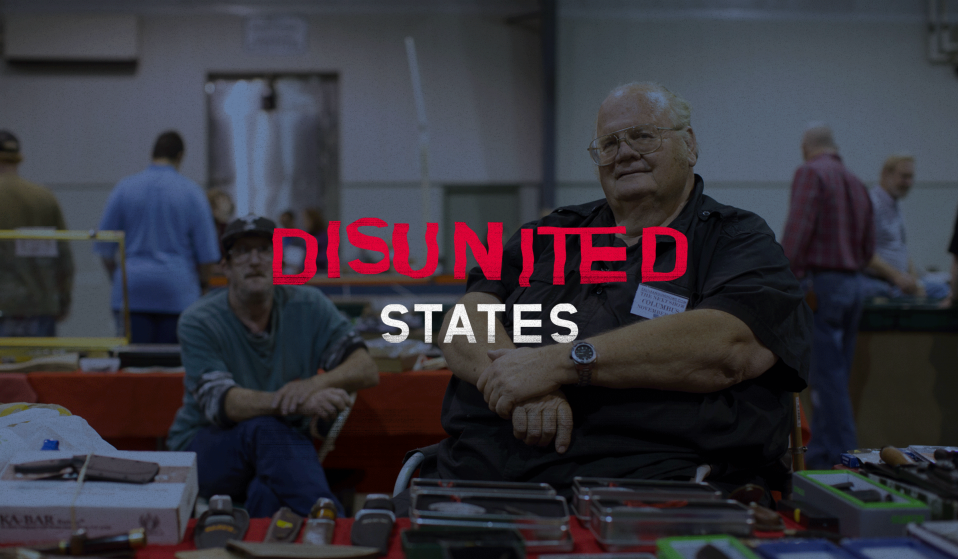 In rural America, voters turned out to support Donald Trump in their hoards. We head to the small town of Perry, which is hosting a gun show, to hear voters' thoughts.

I’ll be honest. Watching protests unfold, and outraged voices on the news, it would be easy to forget that Donald Trump was in fact elected to be President of the United States. It’s no defence of those who put an ‘x’ by his name in the ballot box, but as Barack Obama put it in a press conference on Monday: it’s how democracy works.

Well, sort of. Trump actually lost the popular vote in this election, a topic hot on every Democrats lips. But he still shut up shop with some 60 million supporters.

Throughout my time in Atlanta I’d so far surrounded myself with people who were angry, worried, concerned. I don’t blame them; I feel the same and I’m only visiting.

But at the same time I wanted to hear from some of Trump’s supporters, not his KKK cheerleaders but your more traditional Republican voters: those who voted Romney, or John McCain. 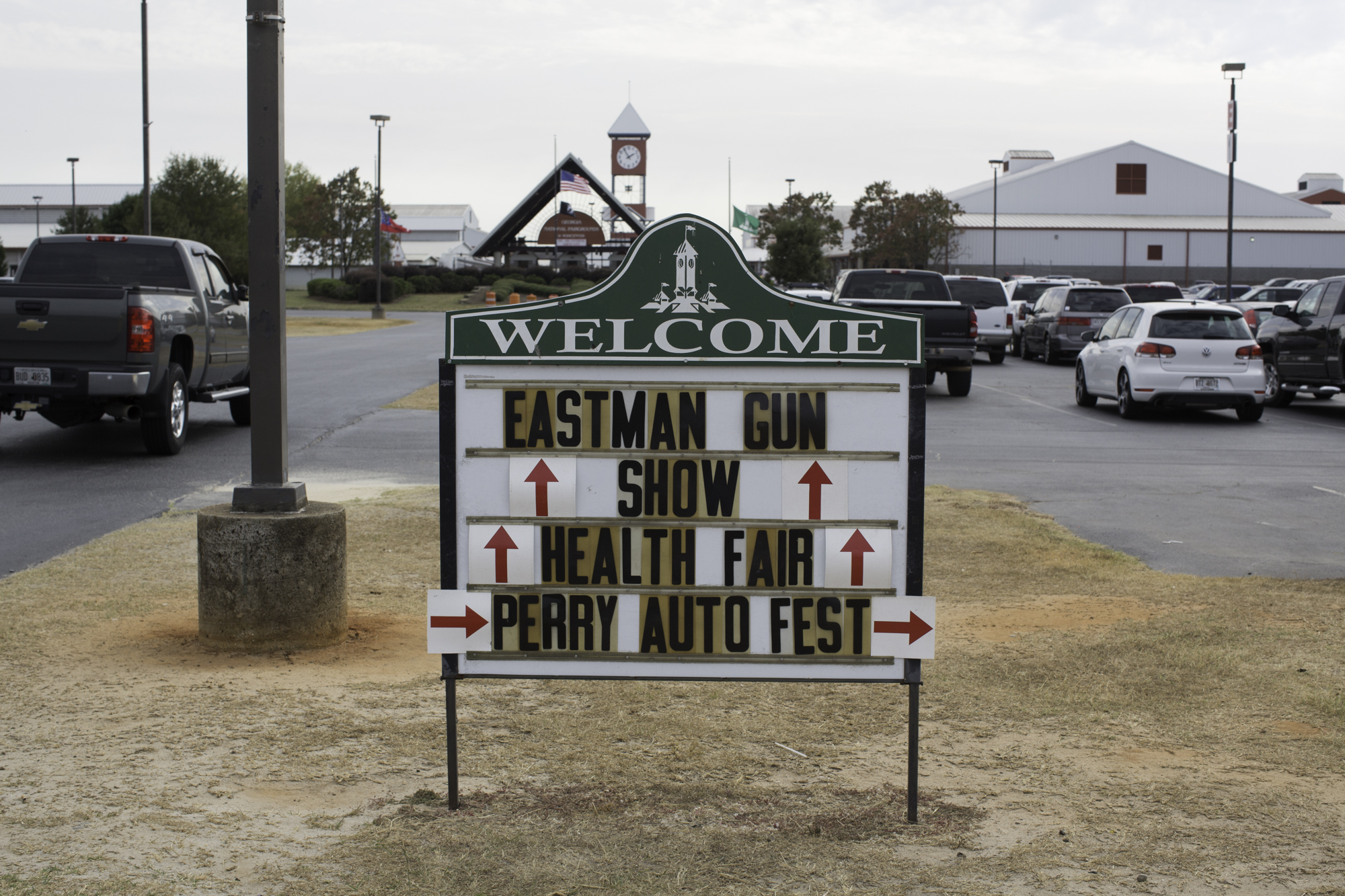 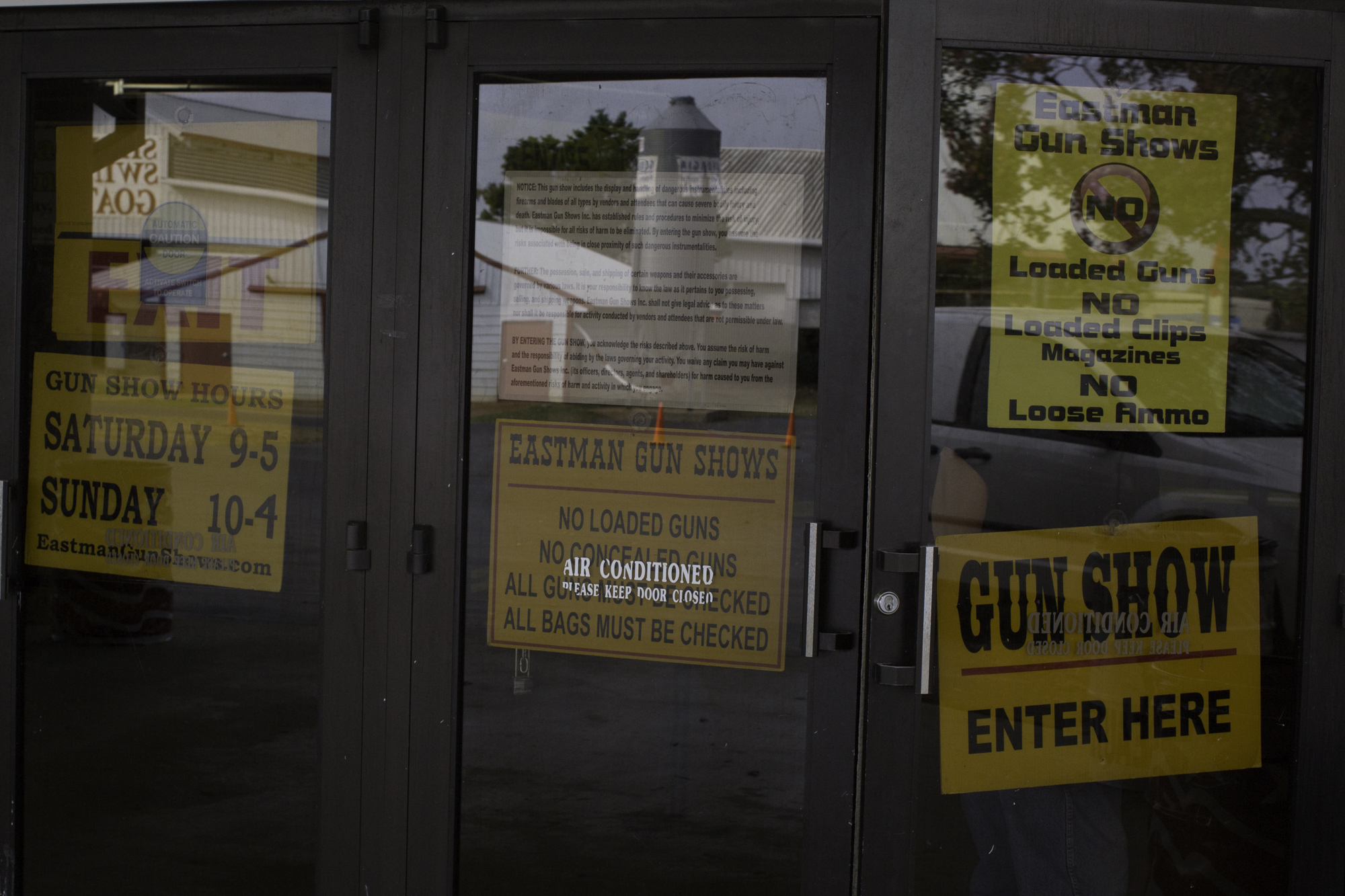 Some two hours drive along the highway south of Atlanta is the small country town of Perry, Georgia – with a population of just under 10,000. They voted Republican red, a long way away from the small island of blue that’s metropolitan Atlanta. Where best to meet some of Trump’s fans, I figured, than a good old-fashioned gun show.

We pull up at Georgia National Fairgrounds and Agricenter, which is hosting a health fair and auto show on the very same day, and pay the $10 cover charge to enter. It feels quite uncomfortable to be honest, paying to look at a load of weapons available to buy. But I want to speak to the people who’ve convened here, so I cough up and make my way inside.

I walk around for a while, getting my bearings and confirming to myself that I still really don’t like guns. Then I try and strike up my first conversation, but most are unwilling to talk. 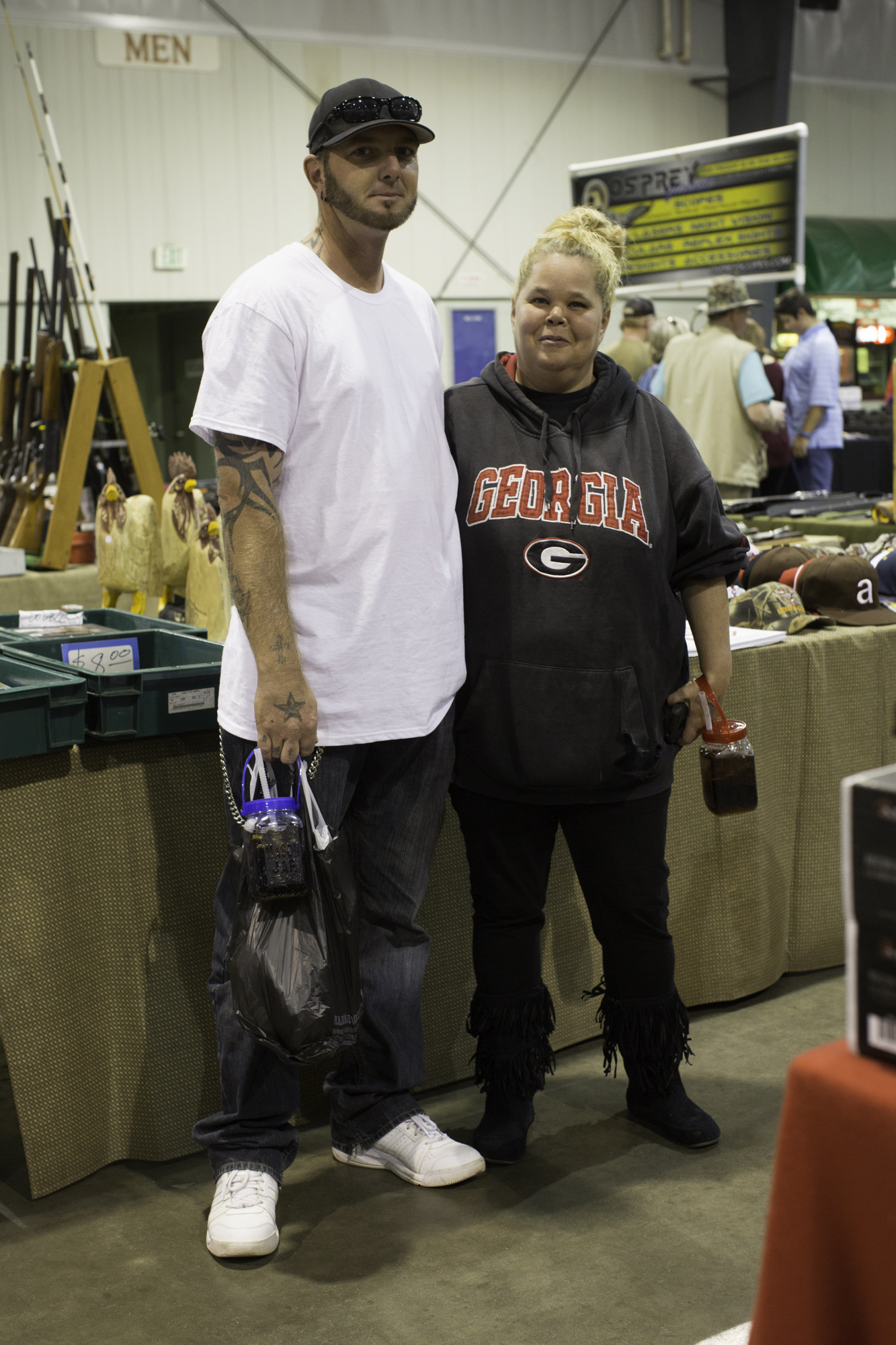 Tara and her husband 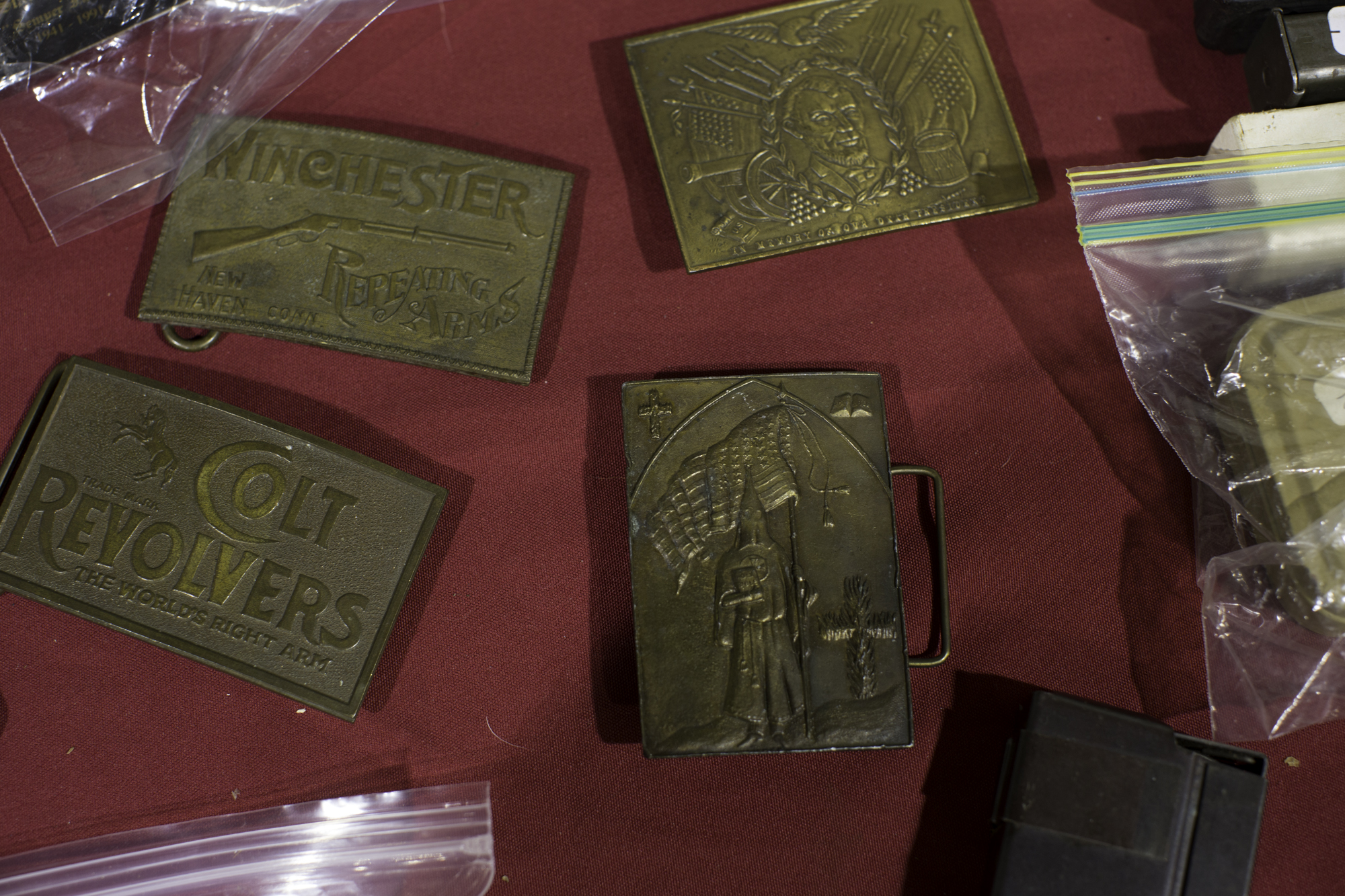 “I’m happy with the election results,” says Tara finally, when I ask her how she’s feeling. She and her husband are hesitant to talk at first, but when I corner them by a table full of rifles they’re left with little choice. So, what is it that makes them happy?

“More jobs,” jumps in her husband. “And he ain’t talking about killing babies.” It takes me a while to decipher the reference to Hilary’s support of women’s reproductive rights.

There’s a distinct sense of unease and, surrounded by guns and piles of KKK regalia, I’m tempted to leave our conversation at that. On the other hand, I think to myself, those who are scared for their futures deserve a better explanation.

“Back in Atlanta people are worried,” I prompt. “Jewish people, Mexicans, Muslims, LGBT people, women and more – they’re worried about their safety in this country. What do you make of that?”

“Nothing offended me,” says Tara. “People have their own opinions.” Her husband adds: “We got kids growing up, two daughters, and Obama wasn’t doing nothing about it, so hopefully Trump will.”

What is it, exactly, that Obama neglected?

There’s a lot of uncomfortable silences. 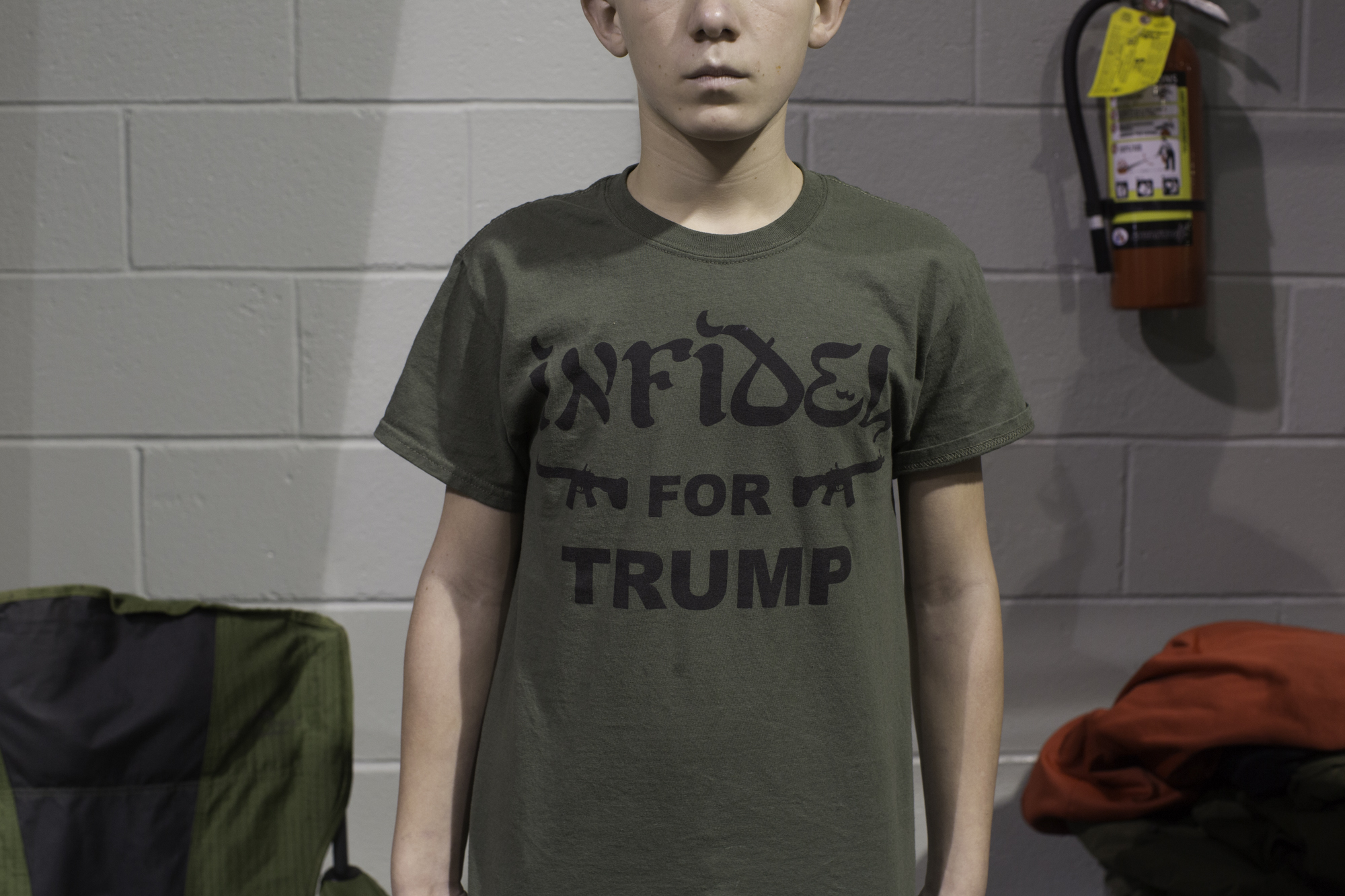 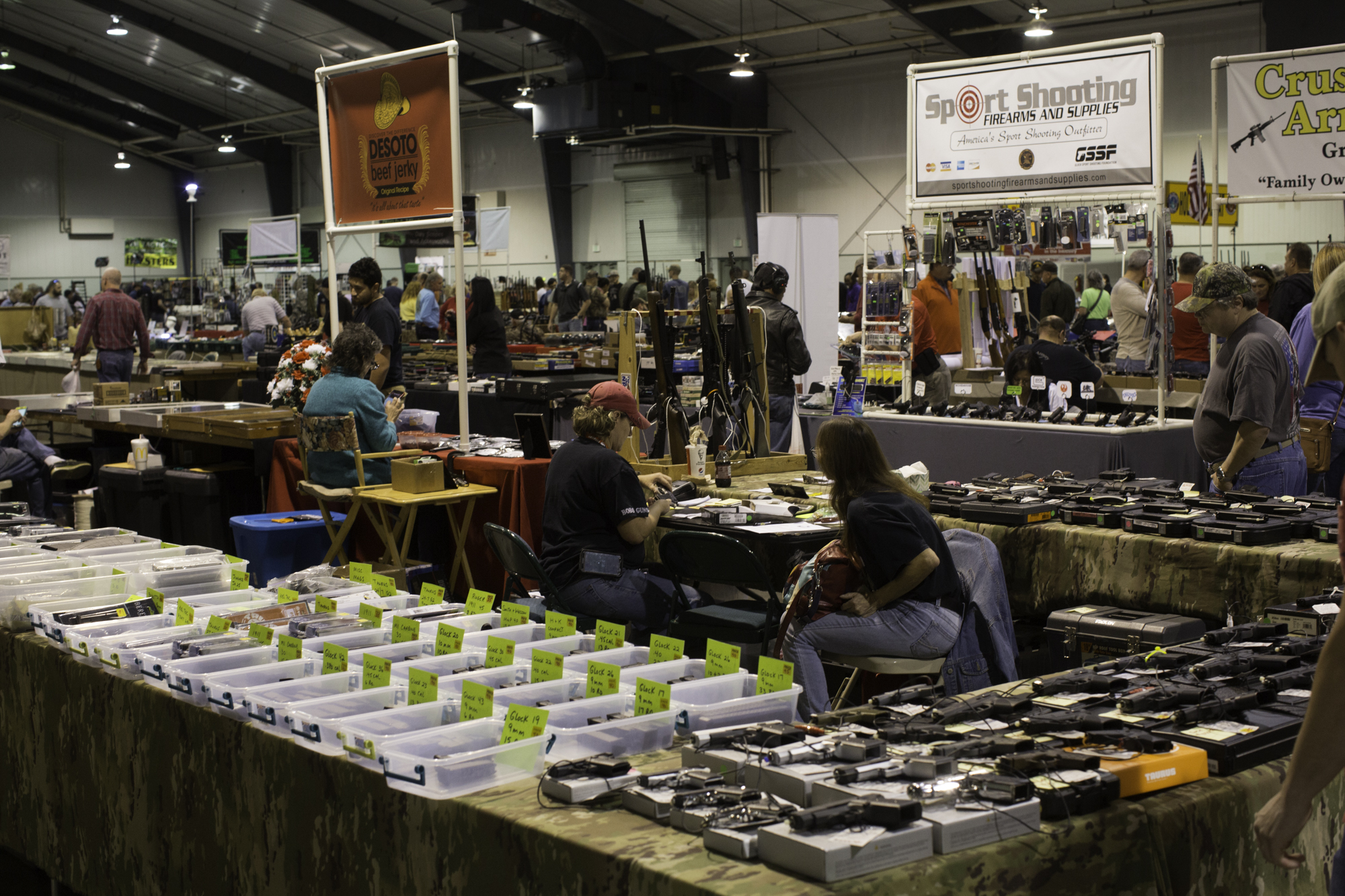 As I stroll around the glorified gymnasium, it’s surprising how unwilling many people are to talk. They’ll happily tell me they’re pleased about Trump’s success, but ask for an interview and a picture and they quickly make themselves scarce. Even here, it seems, there’s a stigma attached to voting for Donald – possibly even a sense of regret. Though I suspect they just don’t feel the need to justify it.

With most of my fellow gun-shoppers giving me the cold shoulder, I start to browse the tabletops loaded with weapons, ammo and more. I need to find a present for my boyfriend, and KKK belt buckles aren’t really what I had in mind.

“Can I help you?” comes a smooth and deep Southern twang. I look up to find a bloke sat back, ready for business. I look down at the pile of swastikas and nazi memorabilia. I say quietly, “no thanks.” 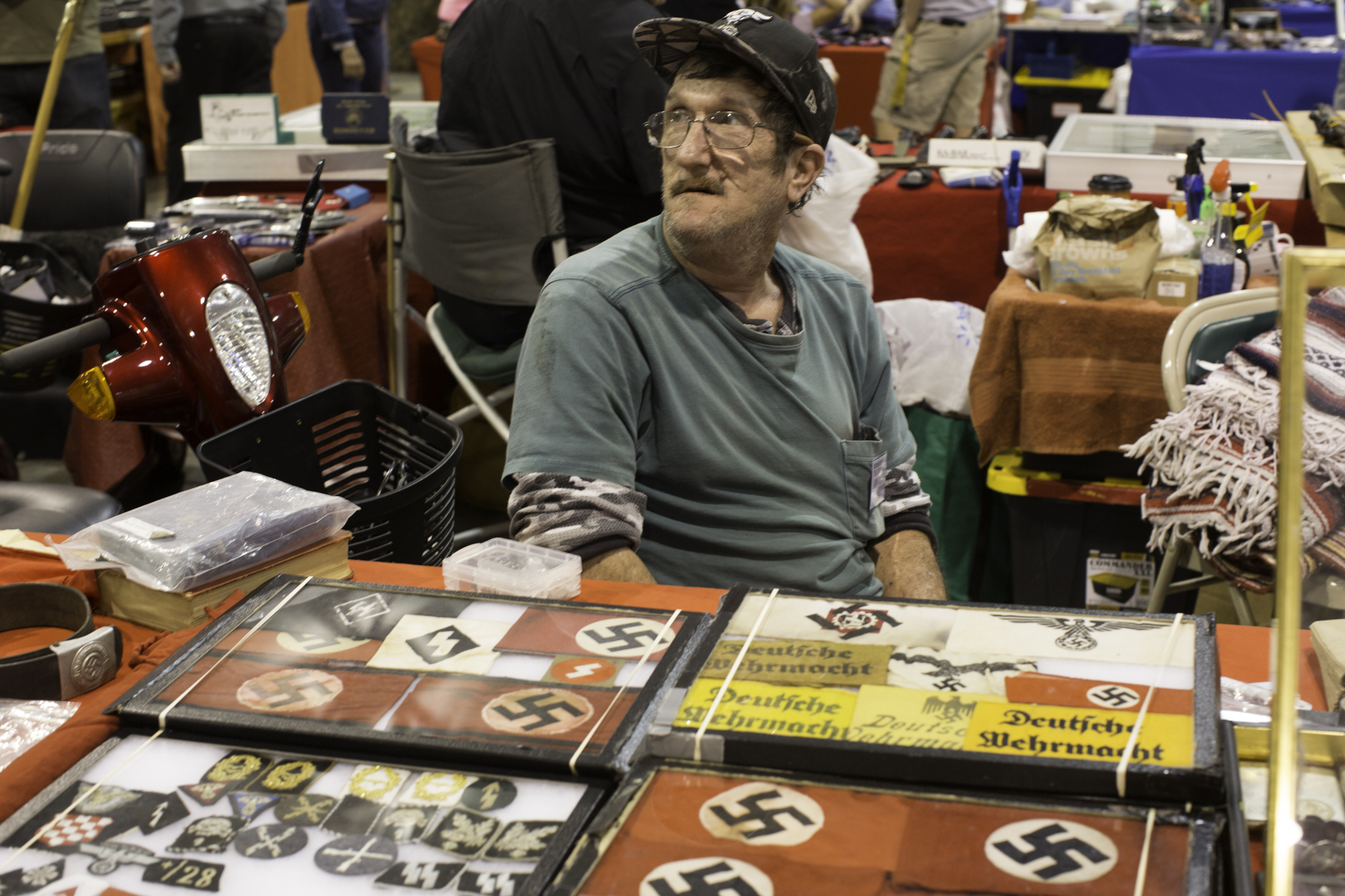 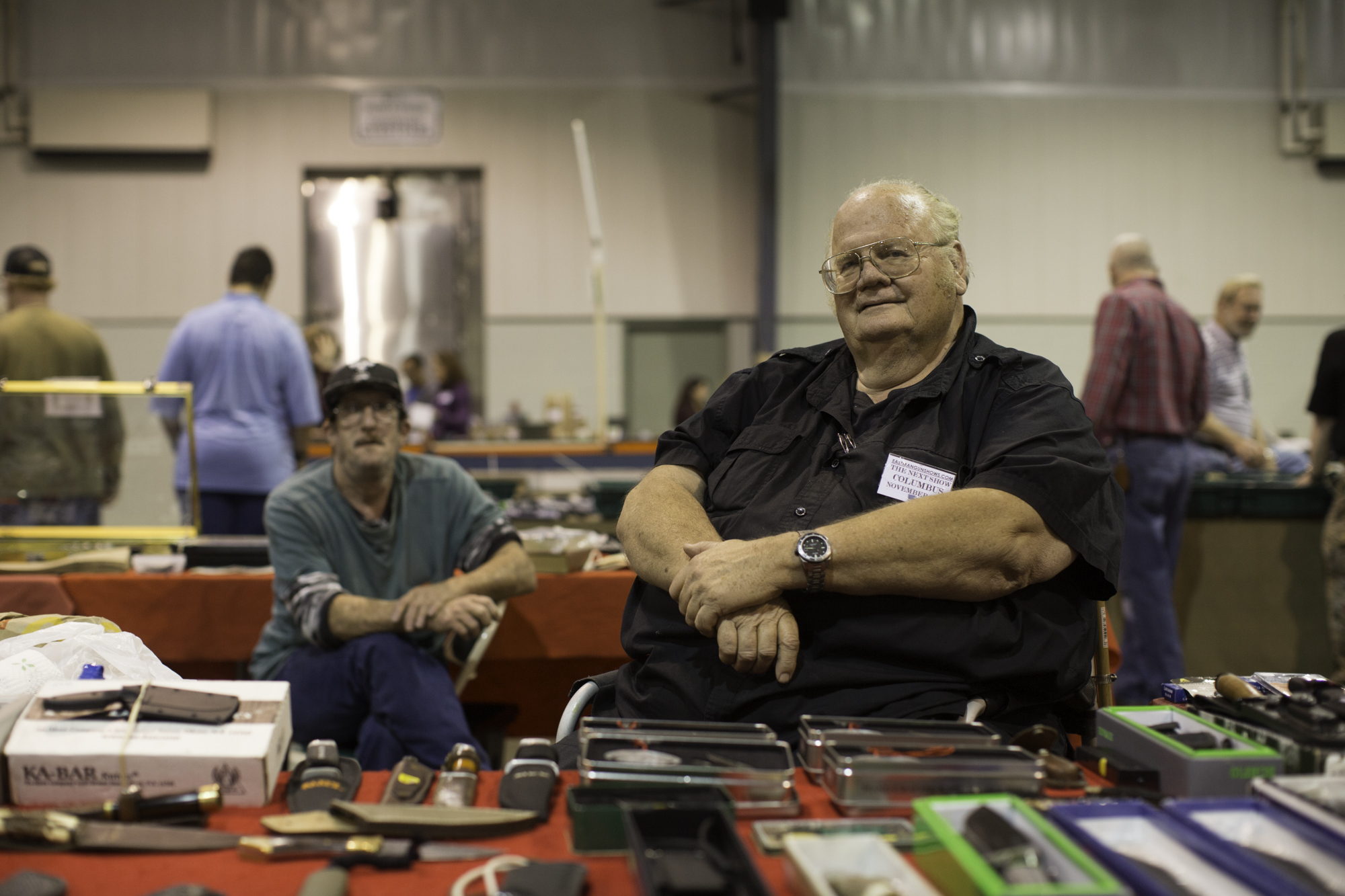 Sat just behind this tribute to Hitler is a friendly looking guy called Dennis. “I’m happy our country voted in a direction that we needed to go in,” he tells me cheerily. “I’m not saying the man is perfect. He’s got problems, but he was honest and that’s what we want.”

Dennis is one of many who refers to “crooked Hilary”: Trump’s accusations that Clinton is a criminal have really resonated and stuck. I ask why Dennis doesn’t like her: her stance on gun control and that old basement server surface again.

Conversation turns to the ban on Muslim migrants, and the rise in hate crime that we’ve seen in the past twelve months. 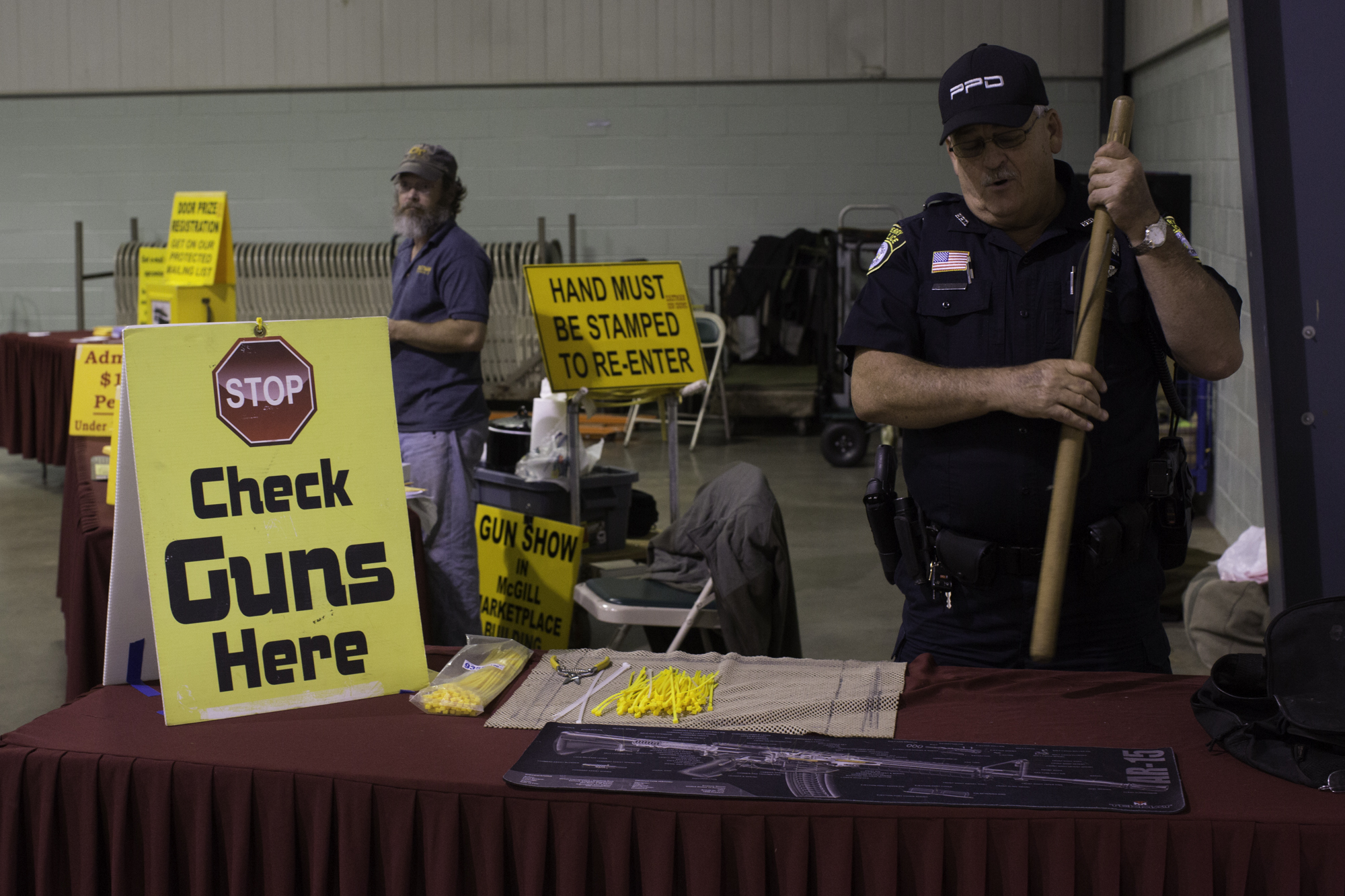 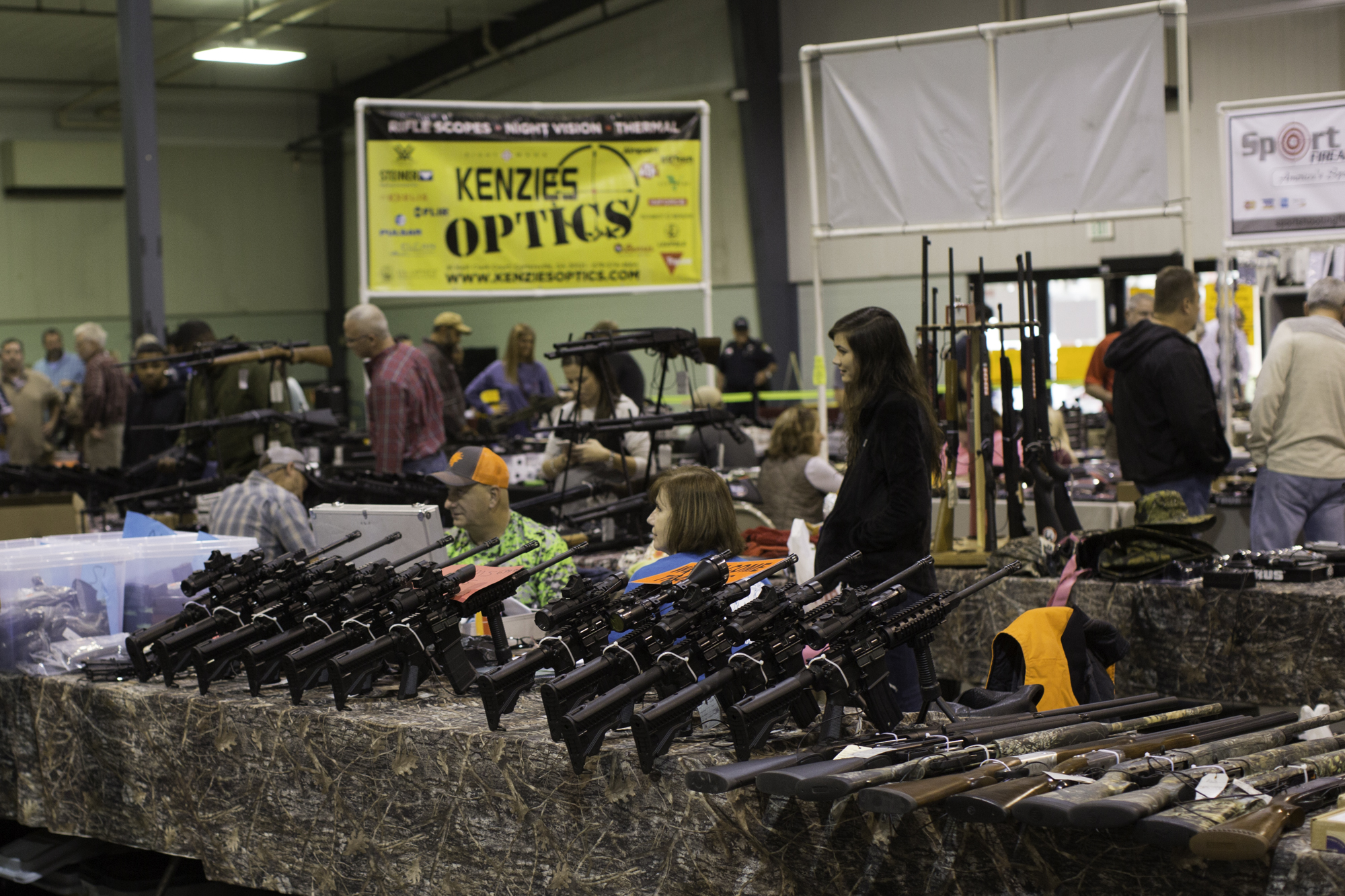 “If there is a way to properly vet people, I don’t know it. And I doubt [there is one] right now, so I think we’ve got to ban Muslims,” he says. “Every time I see pictures of them coming in I see young guys like you, not old ladies and children.” I’m not entirely certain if this is a reference to my age or darker complexion, but before I can interrupt Dennis moves on.

“We can’t verify their backgrounds because their whole country has blown up and they hate us, they want to kill us. I think we have to ban them, and then establish a way to allow them in. You guys have let a lot of them in! Isn’t that a problem over there?”

I consider suggesting we might want to blame mass shootings on the guns he and the other stool-holders are flogging, rather than vulnerable refugees, but I’m already being eyed up by security, and to be fair Dennis is sat in front of a considerable pile of knives.

“One thing I do think is a problem,” he quickly chips in, “and I don’t know how Britain handles it, is this thing on transgender.” I  consider sticking around to tie up the conversation, but quite frankly the Nazi memorabilia on the table behind us now feels too much to bare. 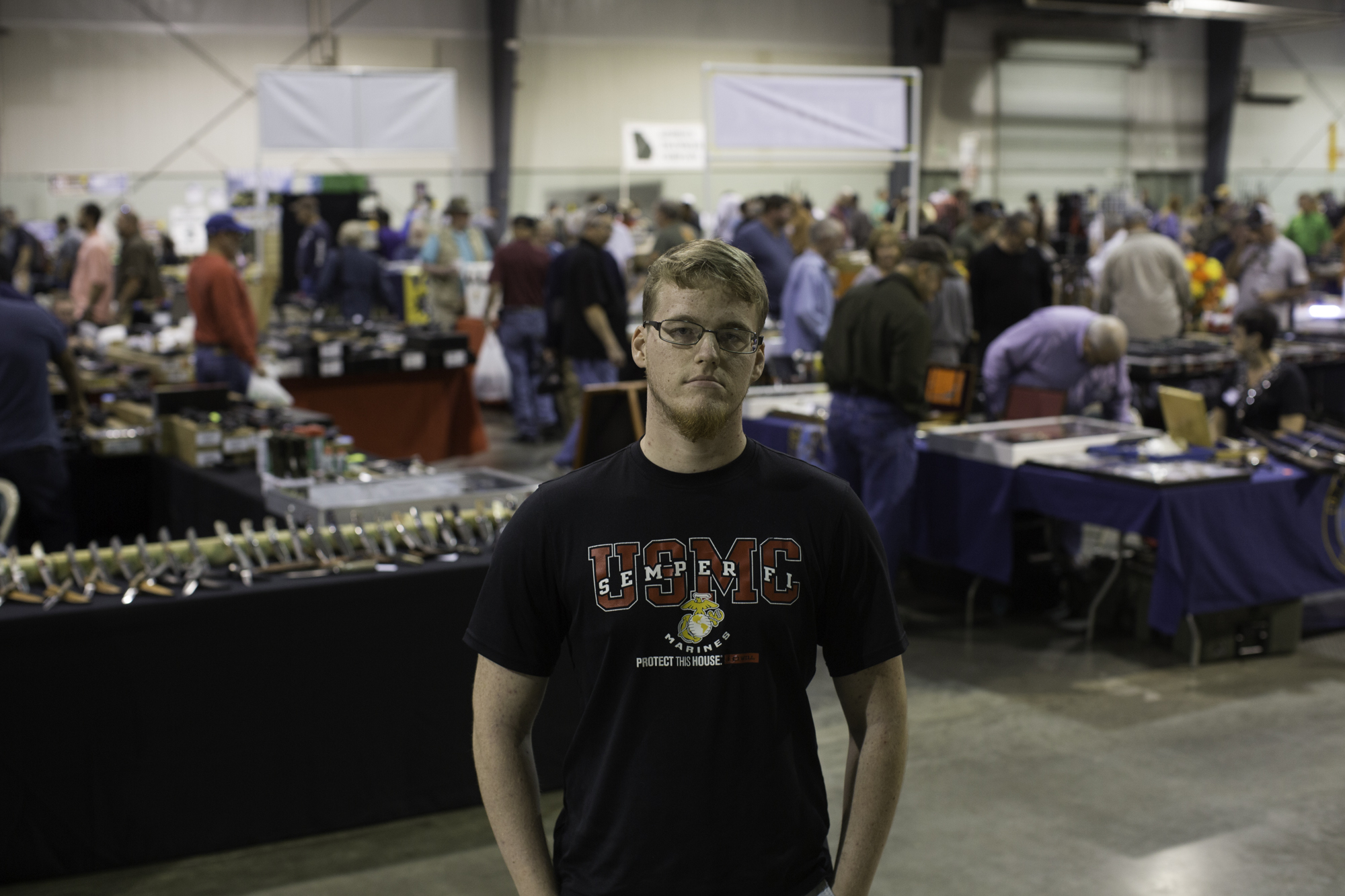 “I saw Trump as the lesser of two evils,” says 20-year-old military kid Phillip, a friendlier face among the scowls. “There were faults on both sides, but in comparison to the other choices I thought he was best.”

It’s a sentiment shared by many of the younger people I find myself speaking to. Sure, Trump had “downsides” as they put it – but he was better then “crooked” Hillary any day. There’s a level of privilege you need to possess to be able to write off his hatred, but I’m left convinced that he doesn’t want to see action on all of Trump’s plans.

“He ain’t a damn politician! He’s a businessman,” argues Jerry Gay, who in his own words builds “beautiful rifles and beautiful knives”. “I’m 83 years old, and Im sick of those politicians in DC. Clinton? She’s a crook.” 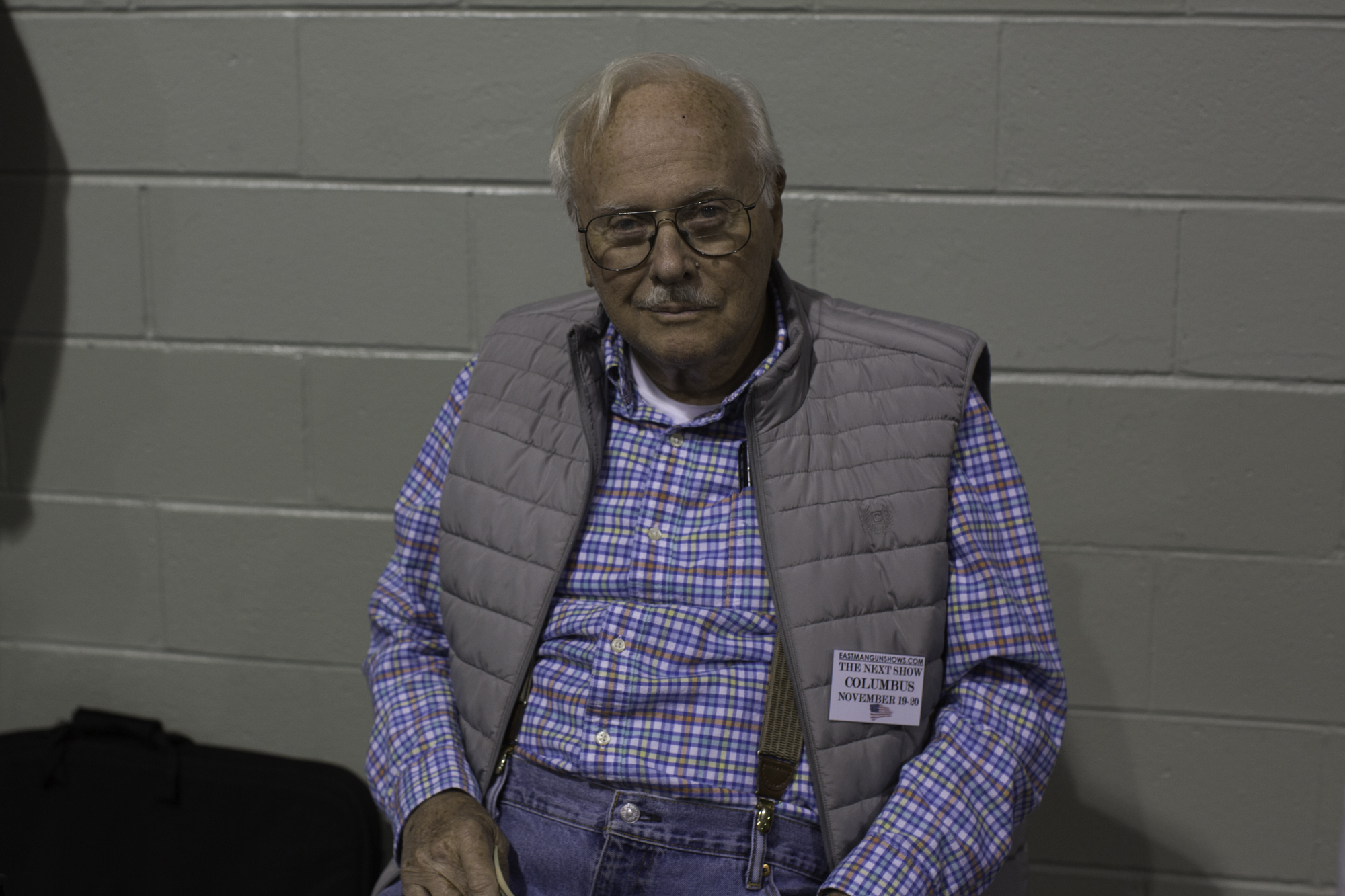 I ask about Trump’s rhetoric towards Muslims, and Jerry has lined up a response. “In the UK there are neighbourhoods where police can’t go in, police are scared because they’re dangerous. You know your police in the UK have these no-go zones.” I explain the reality – that they don’t exist – but Jerry isn’t bothered.

The organiser comes over to where I’m standing. It’s time to stop asking questions, he explains, looking towards the door.

Linkedin
RELATED ARTICLES
OTHER ARTICLES
AI companies that develop image-generators using copyrighted artwork from the internet are coming under fire from artists who say that it amounts to theft.
Photographer Becky Tyrell went down to the fading banger and stock raceway to meet a community desperate to keep it alive.
After blocking the Scottish government’s gender recognition reform bill, Westminster is now devising further changes to the law to make it harder for trans people to self-identify.
A new law change is enabling Britain’s donor-conceived children to know the truth about their origins – but campaigners say the fertility industry must do more to protect people.
Photographer Sean Maung reflects on documenting a small town in Pennsylvania afflicted by high levels of unemployment, poverty, violence, crime, and addiction.
At his West Bank restaurant, Fadi Kattan established himself as the voice of modern Palestinian cuisine. Now, he’s bringing his innovative, bold flavours to the UK’s capital.