Art & Culture / TV / Why is our generation refusing to let go of The Simpsons? 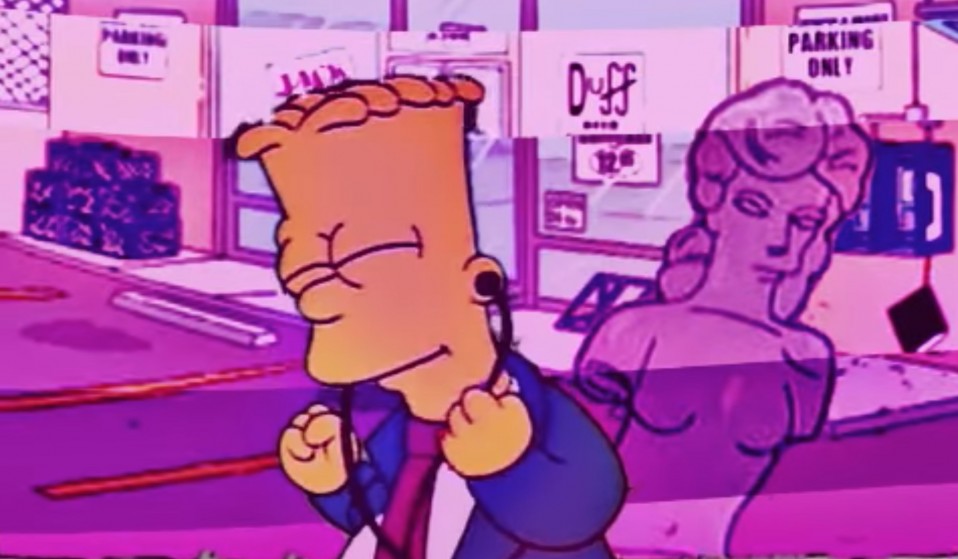 Although the series might have lost its spark in recent years, we’re still struggling to stop watching – and in some corners of the internet it's become an obsession that refuses to die.

Although the series might have lost its spark in recent years, we’re still struggling to stop watching – and in some corners of the internet it's become an obsession that refuses to die.

When I was about 10 years old, my favourite thing to do on this earth was to eat a microwaved pizza cut into rectangular slices with ketchup and watch an old VHS tape of The Simpsons. Their neon-dipped universe was comforting and hilarious, and even though this video only had the same four grainy episodes, which I played over and over again, it never bored me. Even the familiar theme tune filled me with an easy happiness, like climbing into a freshly laundered bed, or taking a bite of perfectly buttered cheap white toast.

This is not an interesting or remarkable memory. In fact, I would guess that most people who grew up in the ’90s and ’00s have a similar one. The Simpsons, like Friends, and to a lesser degree like Sex and the City, has been a ubiquitous cultural force for two, maybe three generations. Those who remember a time when British TVs had five channels, when The Simpsons played at 6pm every day just before Hollyoaks, will probably see the American cartoon as a near-constant backdrop to their upbringing. Because even if you didn’t watch The Simpsons yourself, their merchandise, their catchphrases, their games, their egg yolk-yellow faces, were everywhere. It was hard to go to a friend’s house without seeing Homer bark “D’oh!” out the corner of your eye on someone’s blaring TV screen.

In recent years, though, The Simpsons hasn’t felt culturally pervasive in quite the same way. Viewers have complained that the animation has lost its charm since the ’90s, relying on topical one-liners and excessive adventures rather than the creative absurdity it was loved for in earlier years. As well as that, young people aren’t really watching traditional TV anyway, so there isn’t that same endless familiarity that comes with consistently consuming one specific show.

That said, The Simpsons is far from dead. It is, in fact, very much alive and well on the internet, just perhaps not in the form it was originally intended. Today, the classic cartoon lives on via sad, relatable memes, surreal Instagram accounts, strange visual collages on YouTube and Tumblrs that post an endless conveyor belt of scene stills. 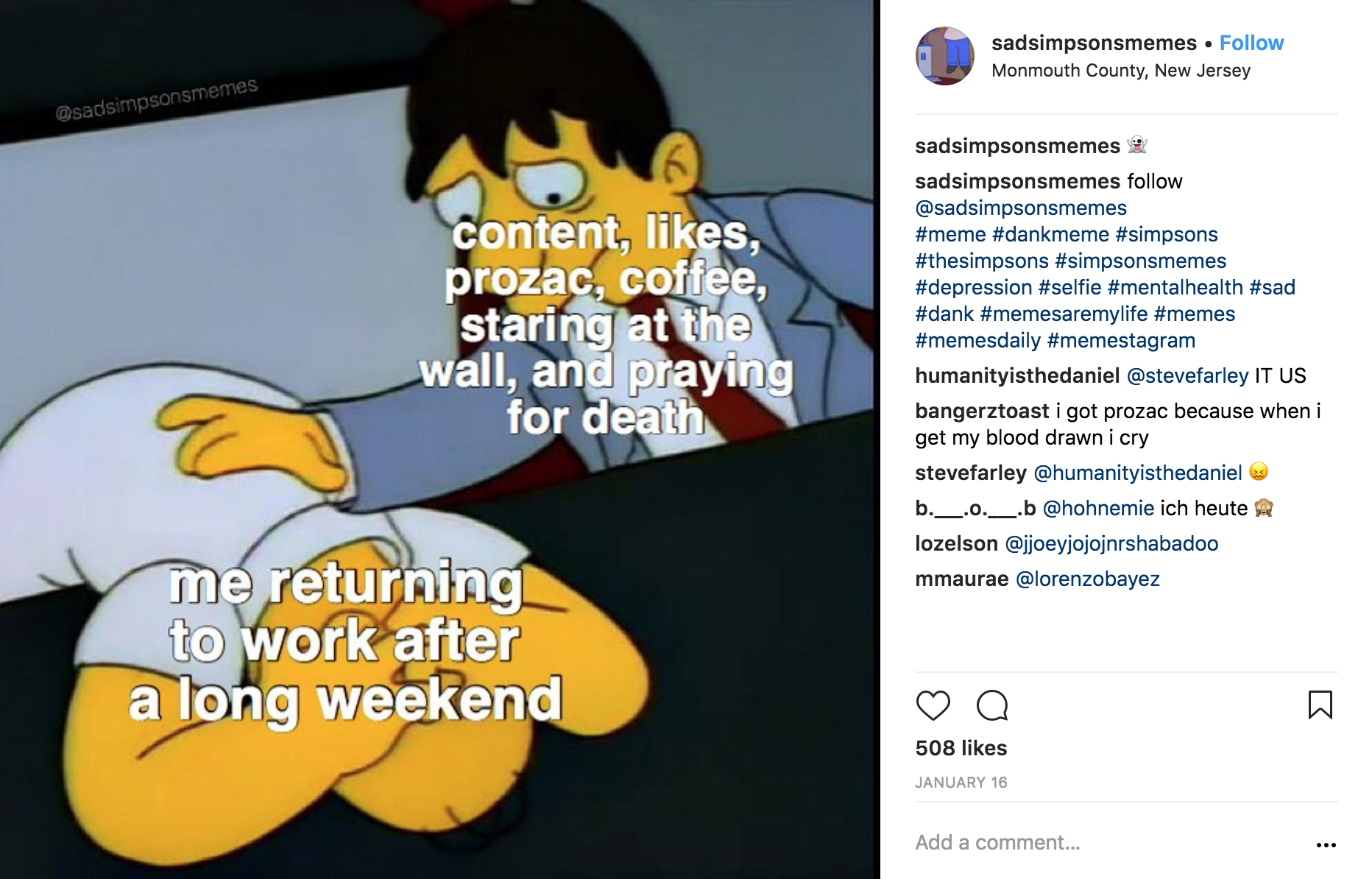 Scenic Simpsons, an Instagram account that currently has around 302k followers, is one of the most remarkable of these current day appreciations. Spliced together by an anonymous curator, the account posts abstract and beautiful stills from the cartoon, each without characters or context, and each depicting an illustrious landscape, a close-up of house interiors or an abstract snapshot in time. They’re colourful, intriguing and very addictive. “All the posts come from series one – 10, which is generally known to real nerds as The Simpsons’ golden era,” the creator has said in an interview. “They changed the animation style up after that and it just doesn’t have the same quality or colouring.”

After the success of Scenic Simpsons, other, similar accounts starting popping up, such as Springfield Cuisine and Simpsons Library, each with their own aesthetic focus. It feels weird – appreciating The Simpsons for the way a cartoon moon hangs in a cartoon purple night sky, or how Marge looks beside eggnog, rather than its plot or jokes – but for a generation raised on the thing, it’s like peering even closer, from an entirely different angle, through fresh eyes.

This isn’t the only way The Simpsons is being channelled online in new, abstract ways. Simpsonwave, a subgenre of music (and I use that term in the loosest possible sense) has been around since the mid-2010s, and essentially constitutes a selection of heavily edited, purple-filtered Simpsons scenes on YouTube with a Vaporwave soundtrack. The result is like smoking a joint and diving into a swimming pool with The Simpsons projected onto the floor. It’s ridiculous, sure, but it’s also yet another example of how this deeply familiar cartoon has been pushed through so many layers of nostalgia, irony and refreshed appreciation that it’s become more than a cartoon; it’s an entity, an institution.

Lucien Hughes, the guy who has been credited with Simpsonwave, agrees that Simpsons nostalgia is pervasive and important for a certain generation. “The Simpsons is pretty unique in that it’s something that almost everyone born between the late ’80s and early ’00s grew up watching,” he explained in an interview with Pitchfork. “Vaporwave is very much about creating an atmosphere of nostalgia, so I feel The Simpsons just perfectly fits the whole aesthetic.”

But really, The Simpsons has seeped into our visual and cultural lexicon in more general, overarching ways than these very specific instances that I’ve just mentioned. There isn’t a day that goes by in which I don’t see someone post a still of a Simpson on Instagram under the caption “mood” or see yet another relatable meme account dedicated to the cartoon (Sad Simpsons Memes is my personal fave) or read people discussing how Lisa Simpson holds a special relationship with ambitious women worldwide or, as in a recent documentary called The Problem With Apu, how the cartoon has often missed the mark when it comes to inclusivity and wokeness.

There are so many Simpsons references scattered across the internet, in fact, that it often feels like a common visual language rather than a niche trend. It’s been over 30 years since their first ever episode aired on December 17 1989, and maybe 10 years since a lot of people stopped watching, but The Simpsons has shaped its viewers in ways that are so deeply ingrained, so completely comprehensive, so absolute yet so subtle, that it’s hard to articulate its influence in a way that gives it justice. We are, it seems, a generation who will simply never let go.

Linkedin
RELATED ARTICLES
OTHER ARTICLES
Photographer Matthew Brookes recalls following a group of young people in Venice Beach living in search of the perfect wave.
Wealth inequality and the rising cost of socialising is placing a strain on people’s relationships, reports Eve Upton-Clark.
50 years since its inception, and the campaign calling for recognition that capitalism depends on domestic labour is as pertinent as ever.
The last few years have seen an increase in LGBTQ-led initiatives to feed the hungry, with many finding ways to stay afloat despite the challenges.
Photographer Arthur Grace recalls travelling through the Soviet Bloc and finding ways to evade the surveillance of his work.
Freddie Miller’s new series of photographs investigates who today’s trainspotters are and what drives their unfettered enthusiasm.