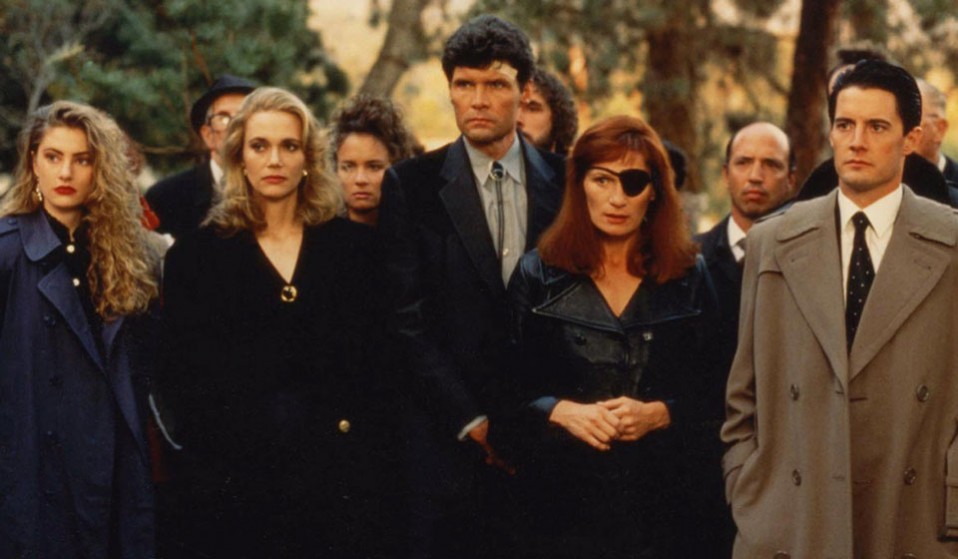 Angelo Badalamenti’s haunting score flowed through almost every scene in Twin Peaks, its mix of abstract jazz patterns, soaring pianos and swelling synthesisers creating a surreal and sinister atmosphere that seeped into the cultural consciousness, and soon became inextricable from the ‘otherness’ of the show as a whole.

Fittingly, musicians have been using Twin Peaks and its soundtrack as a source of inspiration ever since, from lyrical elegies to its absent lead character (Bastille’s Laura Palmer, Marilyn Manson’s Wrapped In Plastic) to faithful evocations of its swing jazz sensibility (Jenny Gabrielsson Mare’s The Black Lodge). Below, we’ve chosen some of the more interesting musical tributes, as well as a few key tracks from the original score.

Probably the second most recognisable track from Badalamenti’s original score.

3. Angelo Badalamenti – Theme From Twin Peaks Fire Walk With Me

Opening theme from the soundtrack to Lynch’s opinion dividing prequel.

Angelo himself provides vocals on this track from the Fire Walk With Me soundtrack.

The closing moment of Shadow’s seminal debut, blending the dream from John Carpenter’s Prince Of Darkness with the Giant’s warning from episode 14.

The dust had barely settled on Twin Peaks before a younger, ravier Moby capitalised on its popularity with Go, which made the UK top ten in 1991.

Taken from a recent BBC1 Essential Mix: samples a documentary in which Badalamenti discusses how he wrote the Love Theme from Twin Peaks.

Track named after the junction where Laura Palmer was last seen alive, by ambient duo featuring one half of Stars Of The Lid (see above).

Samples ‘The Pink Room’, from Badalamenti’s Fire Walk With Me soundtrack.

Samples vocals by the late Jimmy Scott from Sycamore Trees, from the closing episode of the second season.

Electronic elegy to Sherilyn Fenn’s sultry daddy’s girl, from an album named Where We’re From The Birds Sing A Pretty Song, itself a Twin Peaks reference.

Linkedin
RELATED ARTICLES
OTHER ARTICLES
Photographer Jeffrey Silverthorne always treated his subjects – often those living on the margins of society – with empathy and respect.
Hackney Bumps is a DIY sanctuary in the heart of East London, home to a thriving diverse community of skateboarders – and beyond.
The photographer describes taking inspiration from Magnum photographers to craft an intimate and revealing portrait of the city.
Through stills, anecdotes and film criticism, a new book examines the portrayal of women’s destructive emotions, reframing it as a challenge to patriarchal structures.
Photographer Nico Froehlich’s series documents South London’s diverse communities, while also reflecting on their fragility amid rapid gentrification.
Max Miechowski reflects on documenting land that is being lost to the sea – and the people who live life on the edge.