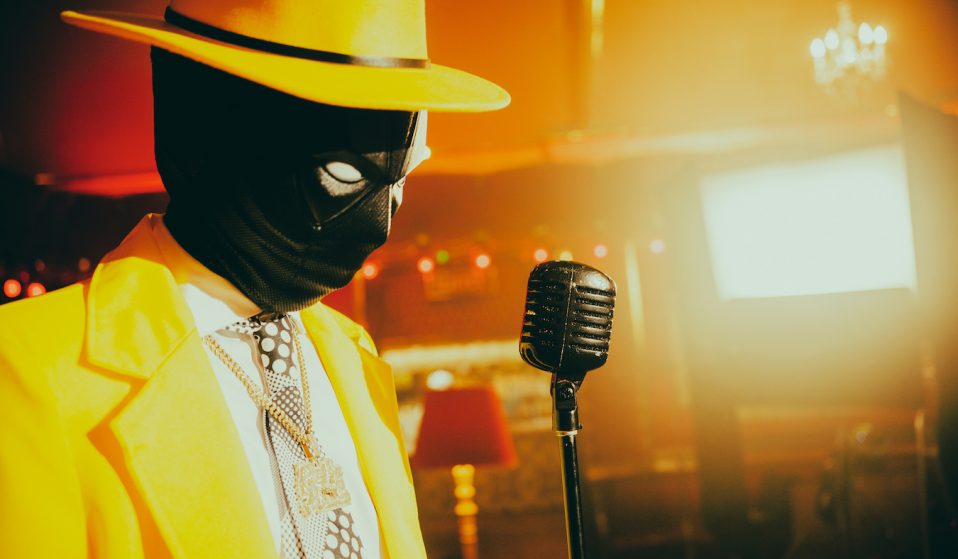 The rapper talks injecting humour and fun into his sound and challenging drill stereotypes.

Following the recent release of his highly-anticipated mixtape, the rapper talks injecting humour and fun into his sound and challenging drill stereotypes.

Hailing from Homerton in East London, Deadpool-mask-wearing rapper V9 first emerged in 2017 as UK drill completed its transformation from Chicago-inspired offshoot to its own distinct sound. The characteristics were easily identifiable: rappers laid cold, often nihilistic verses about local rivalries and tit-for-tat violence over dark minor keys and ricocheting percussion.

Sonically, V9’s early offerings like ‘Japan’ and ‘Charged Up’ followed that formula, introducing listeners to his lyrical blend of violence, comic-book and anime references and deadpan humour. “Backflip when I slap this stick (Bow, bow) / Or do the rolly-polly (Mmm) / When I back the smoke on your homie (He gone)” he raps on 2020’s ‘Hello Hi’, crossing the line between gritty realism and fantasy.

At the end of 2019, he released ‘Kids Next Door’, named after the noughties Cartoon Network show. The contrast between its eerily peaceful, mellow production and V9’s menacing delivery countered criticisms that all drill ‘sounds the same’ and signalled his willingness to take risks with the experimental beats that have since become one of his trademarks. His sophomore project Yūdokuna is loaded with warm, textured soundscapes. New album Murk with a Mouth – a play on Deadpool’s nickname – takes things a step further. It feels like listening to a comic book with its mix of bright, colourful productions and ultra-violence.

The willingness to take creative risks extends to his videos, too. ‘Hole in One’ finds V9 and stable-mate Billy Billions working behind the counter of an American-style donut shop, complete with baby pink uniforms, while ‘Change’ sees him channel Jim Carrey’s ‘90s classic, The Mask. The moral panic around the UK drill scene has turned young drill artists into modern-day boogeymen, but V9’s charismatic, fun approach is an antidote to that.

Huck caught up with him to talk about Merk with a Mouth, pushing the boundaries of drill, embracing being an artist and more.

For me, listening to Murk with a Mouth was like listening to a comic book because of the blend of colourful productions and violent lyrics. Did you come at it with a particular concept in mind?

Not really. I just tried to put the hardest tracks out there, bruv. The tracks I thought would make sense and show the level up and growth.

Sonically, would you classify the project as a drill tape? Because production wise, there are a lot of different elements there.

It’s definitely more than drill. There’s trap on there. A lickle singing and that too!

The Ghetts feature on the new album really shows how you’re viewed by your peers, in my opinion. How did that one come about?

I just DM’d him, I can’t lie. When he released his album, I tweeted about it and he replied. I didn’t even know he knew who I was. A couple months later I thought ‘I need to get this guy on a song’. So boom, I just DM’d him and I asked him.

He’s a legend. What did you learn from your time in the studio together?

I learnt a lot with my man! Not just things to do with music but how you’ve gotta move in life, too. But you see when he’s rapping, he’s amazing. I changed my verse like five times. I deeped [realised] that I couldn’t go head to head with my man. I had to do my own thing.

How have you improved as a rapper since you dropped ‘Japan’ back in 2017?

I’d say now my wordplay is way better. My rhyming is better too. I actually listen back to things now. Back then, I didn’t really care too much. But now, this is my craft innit. And before anything I make sure the beat is right. Nobody’s got beats like me. That’s how it starts, with my beat selection.

What are you looking for in a beat?

It’s about what I like. I’ve taken in a lot of music. I listen to a lot of American music, and what they come with is crazy, people like Metro Boomin and Pierre Bourne. Drill doesn’t have to be the same old ‘boom, boom, boom’. Everyone likes the same kind of beats. I used to jump on those kinds of beats too, those typical drill beats. Then I dropped ‘Kids Next Door’ and at first, people didn’t understand it.

Then they started to realise how my voice and the calmness and mellowness of the beat was working together. They realised I was doing a madness with the beats! That’s why drill is so special. You can make it sound like it’s trap or rap, but it’s still drill. People might think drill is just one sound, but it’s not. You can make it into whatever you want it to be.

Are those warmer beats a way of bringing in more listeners from outside of drill, without having to dilute your content too much?

To be honest, it’s just what I like. Obviously with the content of my lyrics changing, that’s happening anyway. I’m getting there slowly. It’s not every day ‘run a man down’ and that. I’ve got ‘Double S’ on my tape. No violence in that song, at all. I’ve shown people I can switch it up.

Your Deadpool-inspired mask is a huge part of your identity as an artist. Was it always the plan to rap with a mask on?

It kinda just happened. Everyone was wearing ballys [balaclavas] back in the day. I wanted to think outside the box. And then I saw a picture of Deadpool and Venom and from there, it just stuck. It worked, so there was no point in taking it off.

At that point was it simply about keeping your identity unknown, or were you already thinking about things like branding and marketing?

Nah, I really thought about it. I thought if people see me wearing that kind of mask, and then they hear the kind of music I’m making, it’d make sense. And I think it’s paid off for me.

Drill lyrics are analysed and unpicked in court proceedings, often to prosecute young people on joint enterprise charges. Do you think the fact that you’re wearing a Marvel superhero’s mask encourages people to take your lyrics as entertainment, first and foremost?

Listeners maybe, they might think that. But the feds don’t think that. They’ve used my bars in court numerous times for the man dem. They’re horrible people, bro.

You mentioned thinking outside the box. That seems to be something you’re doing across the board, because your videos are super creative, too.

That idea [for ‘Change’] came from Alex [label team], my manager. It’s a hard video! But I think it could’ve been harder. The idea I came with was crazy! You know ouija boards? I wanted to get fans to be in the video, and if they say my name three times I just appear. And then incorporate the mask concept with that too. That would’ve been wavey! But next time, innit.

It really looks like you’re embracing all aspects of being an artist and having a lot of fun with everything you do.

Do you know why? It’s because I don’t show my face. Deep down I’m just dreading it, straight face and that [laughs]! Nah, I’m joking. I love it, man can’t lie. Being outside in the cold, shooting a video in a car with a girl… that’s dead bro. You don’t even need a mad budget. We think we have to spend money to make things lit [good] but we don’t have to. If it looks clean and the concept is interesting, you’re good to go.

References to the Marvel universe and anime are a big part of your lyrics. So, in your opinion what’s the best Marvel film?

And your favourite anime?

For me, it’s Dragon Ball Z – you can’t beat that. Imagine, after school everyone was running yard to watch it. Even my marj [mum] used to watch it.

Things are really starting to take off for you now. You’ve got the tour with Unknown T and your own headline show coming up too. How do you feel about all that?

We’re here for the challenges, man. That’s what it’s about. We’re going places! Who wouldn’t want to be going on tour and doing shows? That’s lit!

Drill is generally associated with bleak, dark themes and people have pre-conceptions of what a drill rapper will be like. But it sounds like you’re having a great time.

You see me, I’m a jolly guy you know fam! I’m like Deadpool. I might be happy sometimes and I might be angry sometimes and then I’m happy again. I’m not here to be bad 24/7. You can’t be doing the bad boy thing all the time. You gotta show a bit of life and a bit of personality. Showing your personality goes a long way when it comes to your fans so they know I’m just a normal guy. People won’t wanna work with you if you’re doing badness 24/7.

And as music keeps giving you more opportunities, I guess that will reflect in your content too.

Of course! I’m living life differently. I’m not just on the block chilling now. I’m doing better things than that. I’m doing shows, flying out to places, meeting a whole bunch of new people. Meeting hella gyal [laughs]. I can talk about so much different shit now.

Murk With A Mouth is available to stream now.

Linkedin
RELATED ARTICLES
OTHER ARTICLES
The action took place in response to the 200 asylum-seeking children who were placed in hotels run by the Home Office who have gone missing.
Activists and campaigners are fighting back against new laws that would seriously undermine the ability to take industrial action, calling it an attack on fundamental workers' rights.
A new podcast is opening up the conversation between trans women and trans amorous men in the hope of building coalitions.
David 'Dee' Delgado’s photo project is about honouring and uplifting the city of his youth, and a world rapidly disappearing under the relentless onslaught of gentrification.
Since 2007, Gideon Mendel has made 20 trips to document floods in 13 countries. The result is an alarming record of what has already been lost to the climate emergency.
A recent High Court ruling against the right to wild camp in Dartmoor National Park sparked the largest land protest in history – and campaigners say their fight is not over yet.