Art & Culture / What does lesbian & bi culture look like in the internet age? 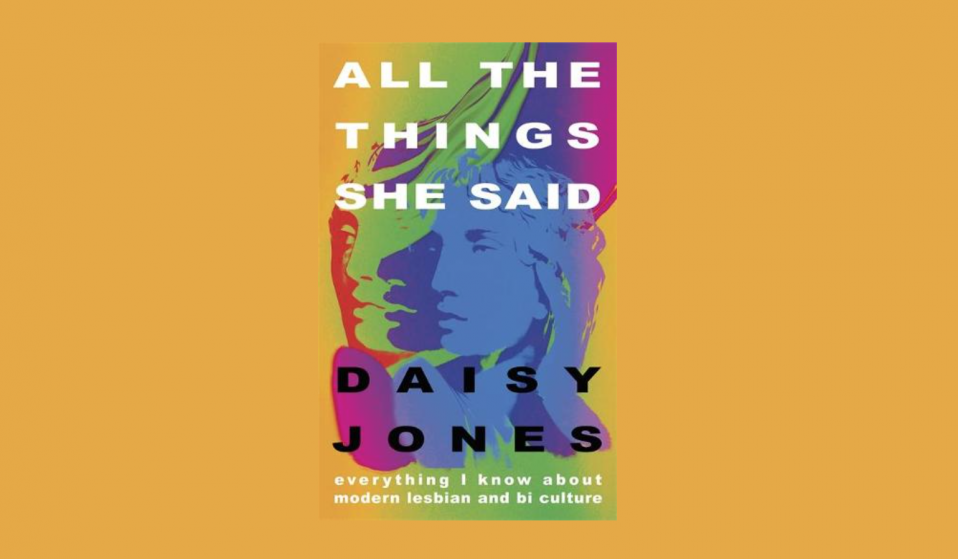 Writer Daisy Jones discusses her new book, a nuanced and introspective guide to the ever-changing nature of modern-day queerness.

Writer Daisy Jones discusses her new book, a nuanced and introspective guide to the ever-changing nature of modern-day queerness.

“There are so many murderous lesbians,” says Daisy Jones with a laugh. “There are actually more murderous lesbians than non-murderous lesbians in movies and TV.” The writer is discussing her debut book, All The Things She Said (Hodder & Stoughton): a non-fiction work that combines personal anecdotes with cultural criticism on all things lesbian and bi culture. The murderous lesbian trope (see: Basic Instinct, Bound, Heavenly Creatures, Lesbian Vampire Killers) is one of many stereotypes that the book explores; other tropes include the ‘crazy lesbian,’ the ‘depraved bisexual’ and ‘Dead Lesbian Syndrome’ – the phenomenon of screenwriters killing off their lesbian and queer female characters.

But while All The Things She Said unpicks the negative cultural stereotypes around lesbian and bisexual women, the book also relishes what modern, online lesbian and bi culture actually looks like: from Carol memes, to Janelle Monáe in tailored suits, to K-Stew TikTok videos, to Rachel Weisz choking Olivia Coleman in The Favourite. The result is a book that takes readers on a romp through queer corners of the internet, while also reflecting on how the internet has made our understanding of lesbian and bi culture all the more nebulous.

Ahead of the release of the book, Huck caught up with Jones to discuss what it means to be a queer woman in 2021, fluctuating definitions and how our extremely online culture has changed everything.

Why was lesbian and bi culture something you wanted to explore in book form?

Mainly because lesbian and bi culture is something I know! Well, that was my naive thought going into the book. When I actually started writing it, I realised I knew nothing at all. But initially, I thought it was something I was familiar with. I’ve been a culture writer for years and putting those things together – lesbian and bi identity and culture writing – made sense for me.

I imagine when you started researching lesbian and bi culture it was like opening Pandora’s box.

Yes, lesbian and bi culture is so broad it’s impossible for any one person to write a book about it as a whole. So, I decided to just make it clear that this is my limited perspective and I’m coming at it as someone who’s only been alive since ‘92. I didn’t want it to be a historical book, I wanted it to be a book that wasn’t something I’ve read before about modern lesbian and bi culture.

That’s a mammoth question and really the main driving force behind writing the book. How can I be so familiar with something so nebulous? How can I look at something and say that’s lesbian or bi culture and what do I mean by that? That was the reason I wanted to write the book in the first place, because I didn’t know the answer to those questions, especially because modern lesbian and bi culture is so pervasive and familiar and something I found very hard to put into words. I really view lesbian and bi culture as an umbrella term rather than something specific.

Culture is always changing but I feel like online queer culture, especially, is constantly in flux. Were you worried about capturing that changing nature?

Oh definitely. I wasn’t nervous about putting any of my personal life in the book but the one thing I was reticent about was saying ‘This is me’, and then changing my mind in five years’ time. I think people change constantly, so defining my opinion and then changing it in the future was the only thing I was worried about.

In the first chapter, I explain that I tried to keep definitions open-ended because words can only go so far in describing the complexity of reality and peoples’ different experiences. People also use words in different ways. I wanted to put that chapter and the question – ‘What does the word lesbian mean?’ – at the beginning of the book. It was important for the rest of the book to be viewed through that lens, that words mean different things for different people. Some people find power in certain labels and some people shun them. You can have one word like ‘lesbian’ and it can mean totally different things to different people. There’s really no solid definition and it’s always changing and will continue to change.

You’re part of a generation that went from offline to online as a teenager which you reflect on in the book. How was lesbian and bi culture impacted by the internet?

I remember when I was growing up, lesbian culture was in the background and considered not very cool and bi culture was invisible. Queer culture in the mainstream was very much centred on cis gay men. The shift to online changed that massively. The internet made lesbian and bi culture more visible, and allowed people to convene in more visible ways – even with something as simple as lesbian style Instagrams. It pushed things front and centre and made it quite campy as well. Lesbian and bi culture has always been campy which the internet fuelled simply because internet culture is quite campy, too.

The shift from invisible and unpopular to mainstream in a short period of time is interesting. Your book captures how lesbian and bi culture has become a real marketing selling point, like the popularity of lesbian period drama movies after the success of Carol. How was it to chronicle that shift in mentality from culture’s gatekeepers?

It’s something I was thinking about, especially when writing the pop music section. It was just fifteen years ago that these artists were being told to repress their queerness or not be so open and now these same industry people are telling them to put their identities front and centre in their marketing because suddenly, that’s cool. There’s something a bit superficial about that. But at the same time, I do feel hopeful after chatting to so many young people. I really enjoyed hearing their perspectives about how they approach identity and I feel hopeful that we’re in good hands when it comes to the future of culture.

As well as hope, were there any other new discoveries you made while writing the book?

I think I learned a lot about what being a lesbian means. It was eye-opening to speak to different lesbians – asexual lesbians, aromantic lesbians, non-binary lesbians, trans lesbians. That was a real learning curve and opened a whole floodgate for me because the word became an umbrella term that is totally different for different people.

All The Things She Said: Everything I Know About Modern Lesbian and Bi Culture is out June 3 on Hodder & Stoughton.

Linkedin
RELATED ARTICLES
OTHER ARTICLES
To mark the anniversary of the mass trespass of Kinder Scout, a group of hikers came together with the intent of creating a new, fully inclusive culture for rural spaces.
The government is scrapping the Human Rights Act in a move that will hit marginalised people hardest.
New legislation is set to make it more difficult to hold Israel accountable for its human rights abuses.
Our new magazine is here, starring the inimitable Mitski. Order your copy now and join us on a trip around the world.
Following the release of his latest album God Don’t Make Mistakes, the rapper talks horror villains, police brutality and being unafraid to show his vulnerable side.
The government’s failure to take long Covid seriously has led to the formation of a group campaigning for the thousands of forgotten victims of the illness.