Art & Culture / What poppers mean in the fight for queer liberation 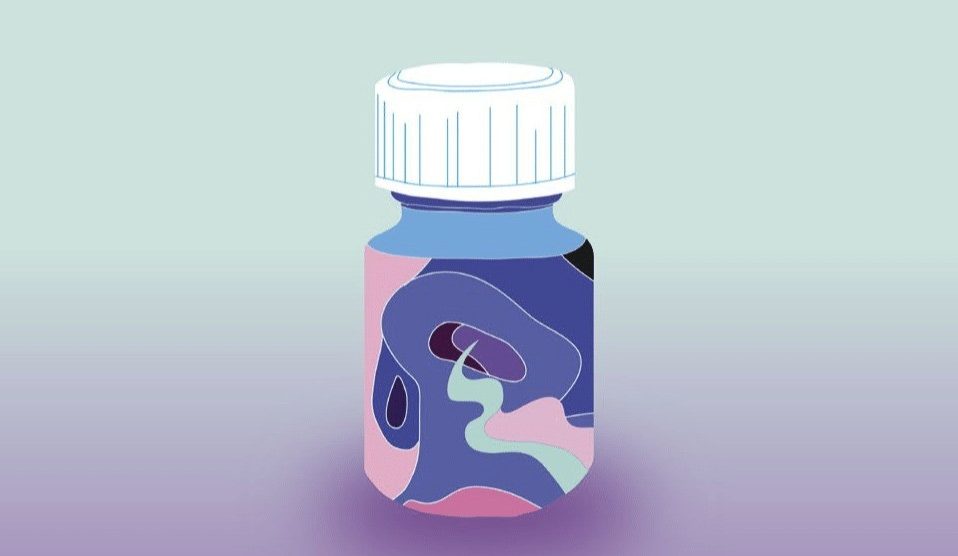 Author Adam Zmith discusses his new book tracing the history of poppers and the drug’s role in forging a greater queer future.

Author Adam Zmith discusses his new book tracing the history of poppers from its past inhalations on gay club dancefloors and the drug’s role in forging a greater queer future.

Close to the end of Adam Zmith’s new book, Deep Sniff, he says that “a better future is like a poppered-up body’s bum hole: open”. It’s a neat summation of the book itself, which begins by tracing the historic significance of amyl nitrite – alias poppers – from its past inhalations on gay club dancefloors and finishing on Zmith’s optimistic vision of the future of queerness. The precise connection between poppers and potential queer liberation may seem fuzzy, but Zmith guides you by the hand each step of the way.

Zmith is best known for The Log Books, a podcast he hosts with Tash Walker, which unpacks ignored corners of LGBTQ+ lore and Deep Sniff, written during the pandemic, continues the writer’s trend of reappraising queer history. He cannily blends the drug’s origins as Victorian era angina relief with its latter-day popularity in gay male spaces, innovatively concluding that the unifying ubiquity of poppers is a blueprint for a greater queer future.

The author is consistent in refuting the myriad limitations of identity, advocating a fluidity and nuance in gender and sexuality that’s proving increasingly rare to find. “When I think about my teenage angst, the fear of the sexual and gender categories is greater than of my identity,” he writes in the book. “That is because, I believe, identity is a feeling.”

In conversation with Huck, Zmith discusses the benefits and hindrances of identity, queer visitors from the future, pandemic-induced moralism and the popularity of poppers.

What was the research process for a project like this?

A lot of the research I did was in summer 2019, and that was done in the Wellcome Library in Euston, London. I remember going into the library and requesting that they bring me this big book of complete notes and scientific papers published by Thomas Lauder Brunton [one of the physicians who popularised the use of poppers to treat angina].

I could read the papers that he wrote in 1867 describing the first use of amyl nitrite on a patient with angina, as well as a lot of academic papers from various different academics on the ‘homosexual community’ and their use of poppers. That was the first stage of research and the second was in 2020 when I had the book commissioned. Because of the pandemic, I was lucky that the Wellcome digitise a lot, including a lot of pharmaceutical industry journals, and I also got in touch with archives over email.

I think the pandemic is so pertinent to what you discuss in the book. How would you say our relationship to sex and pleasure has changed in the last 18 months?

I think that the first peak of the virus in spring and summer 2020 had such an immense impact on our sex lives. It was such a short, sharp drop – from day to night – where so many people’s sex lives were just cut off. And it was horrible for everyone, but it was horrible for queer people in a certain way because for many queer people there’s already quite a high bar for them having a sex life in the first place. It’s hard to find people that you’re a match with, it’s hard to find people you feel safe and comfortable with. We don’t get taught about sex, intimacy and relationships at school, so for a lot of younger people we don’t have a great handle on these things, we just have to experience things and [the pandemic] cut off all of that.

It was incredibly lonely and isolating, and sex wasn’t a part of the national conversation. It was all ‘I want to go and hug my granny in a care home’ or ‘I want my kid to be able to play at the park’ – and all of these things are good things, of course. But I think if any voices said things like, ‘I want to go and fuck the friend I have sex with on a regular basis’, they would be told, ‘well, I’m sorry but that’s a luxury, you can’t have that right now’.

Yeah, and this was all quite depressing at the time, but I hope that Deep Sniff is the opposite of that. I hope that there’s a thread through it advocating sex with yourself, intimacy with yourself in a mental and physical way. For me especially that was true, I really started using poppers during that time and that became part of my solo practice. I think it’s a deeply personal thing that I want people to take away, which is to think about the potential of their body in the pursuit of pleasure – with or without other people.

What import do you think poppers have today, given how far removed we are from their heyday?

I think poppers are having a bit of a resurgence both in use and in conversation. In the recent Canadian general election they were a talking point because the main opposition party said they would investigate legalising them if they were elected – which they were not. And more and more people have been doing them in recent years, and brands have been selling artisanal poppers. Obviously, that all goes hand in hand – or cock in hand – with the rise in general visibility of different kinds of sex and LGBTQ+ lives.

You talk a lot about the foundations of identity, how what we consume ultimately makes up part of our identity and how that might inhibit a future without boundaries. What’s your perspective on how identity has become so ruthlessly wielded as a political tool?

Chronologically speaking, more and more marginalised people have noticed that if they make claims about their identity then that can help them gain acceptance and rights. As a gay man I’m very grateful to my gay ancestors who made the claim that gayness needs to be respected and needs to given full legal recognition. That’s what’s going on with trans people right now and the way we conceive of trans identity is something that has changed quite frequently over the past two or three decades.

I think that’s been a way of [the trans] community getting closer to express how it feels to be transgender and how it feels to not have respect or rights. That’s one of the reasons why we’ve changed quite a lot in how we think about transness and that has inevitably led to a backlash from people who think ‘Oh, well, you’re just inventing new terms now’…

A lot of transphobes seem to reject the fluidity of the trans identity.

And the reality is that ultimately labels and categories are just mere projections of what we feel inside. That’s my problem with our obsession with identity right now because it’s right to be reflective and think about ourselves within our society. But on the other hand, the only way we can do that is to use this very limited technology of words and that’s only ever a projection of what we feel about ourselves.

We forget that identity is really a feeling. You know who you are and no one can take that away from you. They can misdescribe you, they can take your rights away from you, but you know who you are. That’s an inner strength that I think we need to have. We’re only able to communicate on a surface level because that’s where we can meet in the middle as human beings – I ultimately can’t make you feel how I feel inside. That’s why artists and performers are amazing because they can do that in other media…

And one of those artists is the late SOPHIE. You describe them as “a visitor from the future who will forever be reaching into space. Inside SOPHIE’s words, performances and final act is the queer utopia of always grasping, always dreaming of a freer life” …

Exactly. I think we’re at a really fantastic moment of acceptance and visibility for queer people but, at the same time, a lot of people grab all too easily onto certain words and certain identity categories. That’s understandable and it’s important, it’s about finding ways of asserting who you are.

I think whether you’re grabbing for it in a positive way or you’re running away from it in a negative way, the point is it’s always limiting. I think the challenge is finding out more about who you are and expressing that. And, to be honest, I think that performance art and music and these other idioms of expression offer much better ways of understanding ourselves than words themselves do. And I say that as a writer, so I’m fired.

Deep Sniff: A History of Poppers and Queer Futures is out now on Repeater Books.

Linkedin
RELATED ARTICLES
OTHER ARTICLES
Thousands attended the annual event this year to wheelie through the city and call for ‘knives down, bikes up’.
Ahead of the release of their first collaborative album, the producer and rapper talk psychedelics and the state of UK hip hop.
With skyrocketing rents, packed out viewings, bidding wars and more, renting in London has never been harder.
As the Scottish government announces a rent freeze, an activist with Living Rent who fought and won shares how they did it, and what must come next.
Following the announcement of an 80% hike in the energy price cap from 1st October, crowds gathered outside the offices of energy regulator Ofgem to protest and declare their intention to undertake a payment strike.
Financial turmoil is pushing people who work in the sex industry into more dangerous and desperate situations as a means of survival.