Art & Culture / Why we must interrogate the limits of ‘consent culture’ 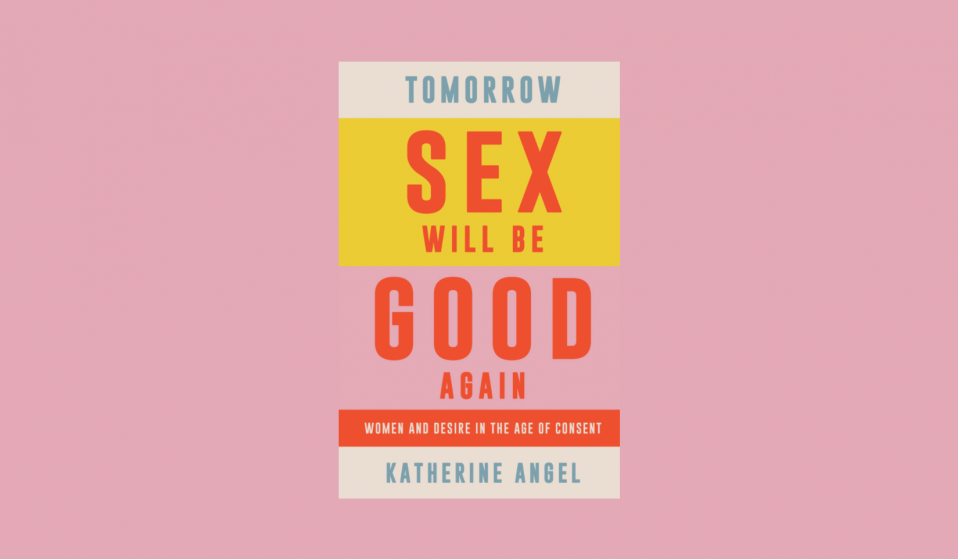 Writer and academic Katherine Angel discusses her new book, which urges readers to rethink the concept of consent as the be-all and end-all of a ‘good’ sexual encounter.

Writer and academic Katherine Angel discusses her new book, which urges readers to rethink the concept of consent as the be-all and end-all of a ‘good’ sexual encounter, recognising it instead as a slippery notion.

Consent is usually framed as a question of ‘yes’ or ‘no’. For women, in particular, being able to confidently declare their desires is perceived as a sign of empowerment, self-knowledge and a marker of progress. But what if this demand for absolute clarity places the burden on women for ‘good’ sex? What if it is impossible for people to know what they want, given that desire is often slow to emerge? What if some of the language around consent is failing us?

These are some of the questions posed by Katherine Angel’s Tomorrow Sex Will Be Good Again (Verso Books), a book spanning science and popular culture; pornography and literature; debates on Me-Too and feminism. In the book, Angel makes the compelling argument that desire should not have to be known in advance in order to protect women from sexual violence and that consent is not static; it can change in the heat of the moment.

Huck spoke to Angel about the problem with consent slogans, the need for better, more honest sex education, and why in today’s pivotal, post-Me-Too moment, it is the uncertain, slippery terrain between ‘yes’ and ‘no’ that we should be looking to navigate.

In the book, you speak about the burden placed on women to share their stories, particularly in the wake of Me-Too. We saw this happening again recently in response to the killing of Sarah Everard. Do you think women, in general, are feeling this burden more heavily today as the cycle of violence continues?

I think there is more exasperation. It’s tricky, because, on the one hand, it’s always really eye-opening for people when women do tell their stories. I think everyone has a right to tell her story, and I will always defend every woman who wants to speak about her experience.

But I do find it concerning that we get these waves repeatedly of something in the news, that kind of incites this mass of speech about our experiences, and actually, not much changes over time in terms of the rates of sexual violence. And also, it makes me think: what function does this storytelling have? And does it actually make us think that we’re doing more than we are, or that more is changing than it is? And why is the burden on women?

What are we looking away from when we immediately turn the spotlight on women to give more evidence about this crazy, violent world that we live in? What does it allow us not to think about? Part of that, I think, is a fetishisation of the role of speech and this paradoxical thing where on the one hand, we know that when women talk about their experiences, they’re often disbelieved and made to feel ashamed. And yet, we also are really hungry for their stories.

You write about how consent culture has assumed some of the characteristics of ‘Lean In’-style, ‘confidence’ feminism, akin to what many people understand as ‘girl boss’ feminism. In the context of consent, where does this approach to feminism fall short?

There’s a lot of criticism of that really individualistic repackaging of feminism – where it’s all about being confident, ambitious and empowered – as being not really feminist at all, because feminism is a collective movement. I think all those critiques are really, really useful.

With vulnerability, it’s very fraught, because women are vulnerable to sexual violence and to all kinds of harassment. So, on the one hand, there’s the fact of women living in a world which is really not friendly towards them. But on the other hand, what I’m trying to do in the book, is to say that feminism that denies our vulnerability in human terms is failing women. Vulnerability is a part of human experience that needs to be explored and not stigmatised.

My worry is that some of the language around consent actually privileges this idea of a woman who knows exactly what she wants and can be really clear and assertive in her relations with men, partly in order that she keeps herself safe from sexual violence. I find that really disturbing because it puts the burden on women to keep themselves safe, and I really believe that women should be able to move freely in the world, being vulnerable, being human, being drunk, being whatever they want to be, and still not encounter sexual violence.

Why do we need to interrogate the limits of consent slogans, such as ‘no means no’?

That’s one of the things I was really kind of trying to turn over in my head, was why those slogans feel problematic to me. If somebody doesn’t want to have sex with you, you should absolutely not have sex with them: ‘no means no’. But the fact is, that sometimes we say ‘no’ to sex, because we feel we ought to say ‘no’ to sex, or because we’re scared of being judged for saying ‘yes’.

We can move from a ‘no’ to a ‘maybe’, to a ‘yes’ – and that’s absolutely fine. A lot of really good consent education acknowledges that consent is ongoing. The fact is that certain men exploit that fact, that if a woman says ‘no’, she might not mean it forever, so they can keep chipping away and coercing them into having sex. People can use that changeability against you. Whereas actually, it should just be accepted as part of life, that there’s nothing wrong with changing your mind.

It can be hard for women to say ‘no’ because we know that men can get very angry when they’re rejected. So those slogans are useful, and they have been really useful in developing the conversation about sexual assault and sexual relationships, but they’re really just the tip of the iceberg.

In the book, you explain how the law has suffused our thinking about consent, often detrimentally. Did you worry about being able to question consent culture without being seen as dismissing the law, or consent altogether?

The argument of my book is, first of all, that consent is absolutely vital. But to me, it’s just the bare minimum. And it’s really important that there are laws to address violations of consent. We need to think about all the space that isn’t addressed by the law. There’s this whole area which is about ‘bad sex’ and it may not strictly be assault, but it leaves people feeling confused, disempowered and humiliated. That can be really upsetting and traumatic for people.

I don’t want my argument to be heard as saying, like, ‘Oh, consent doesn’t matter’. I mean the opposite: consent really does matter. But there is so much more that matters just as much that tends to get dismissed, I think, partly because it doesn’t fall squarely within the law. I think that affirmative consent is the right model, and it’s a useful model in the law, to say that somebody has to show willingness and agreement [to sex]. But my worry about affirmative consent is that we’ve kind of inflated it, and it becomes part of neoliberal feminism, where we think that it’s just inherently good for people to be affirmative.

I feel like [readers] have understood the really specific argument [I make] and agree that there’s something about the language [around consent] that doesn’t quite chime with them.

What needs to change in terms of sex education?

I think sex education should be compulsory, and it should start really early. When we talk to girls, it’s all about the risk of pregnancy, and STDs and saying ‘no’, and pushing away the boys who are constantly knocking at the door. That doesn’t help women and young girls because, of course, girls want to experience sexual pleasure, and they have the right to expand and explore their sexuality.

There’s this kind of absence of discussion about how sex actually works, and what it might feel like. And then, when they’re adults, we suddenly expect them to be these really assertive, self-knowing, confident creatures. But men are being inculcated through culture [to think] that their pleasure is a birthright, a biological drive that must be satisfied… We shouldn’t accept that as an inevitability.

Not to mention the fact of course, for boys, this is also really complicated. Boys have to fulfil these ideals of masculinity. If they’re not straight, then that’s already a huge kind of difficulty for queer men and boys navigating that teenage period… And I don’t think we’re helping boys either, in that respect.

Your book doesn’t pretend to give any neat conclusion or definitive answers to this very slippery topic. Was that something you had in mind while writing it?

It is about inequality and the imbalances of power, and women all over the world agree to sex that they don’t want, and that makes them miserable. And that is often to do with their vulnerability – economically, socially, racially, and in terms of the precarity of work, housing or, immigration status, all those kinds of things.

I think that proper social policy that eradicates inequality really helps women in the sexual realm. It won’t solve everything, but it is part of the problem. So, I think there are concrete things people can do, but it’s true that in this book, it was really mapping out [consent] for myself, as much as anything else.

Tomorrow Sex Will Be Good Again: Women and Desire in the Age of Consent is out now on Verso Books.

Linkedin
RELATED ARTICLES
OTHER ARTICLES
Thousands attended the annual event this year to wheelie through the city and call for ‘knives down, bikes up’.
For over a decade, gamblers have won big by employing people to place live bets from the court. But does this dubious method still work?
Rogue landlords are exploiting young and inexperienced renters and leaving them in mental and financial turmoil, reports Niall Hignett.
Ahead of the release of their first collaborative album, the producer and rapper talk psychedelics and the state of UK hip hop.
In his 2008 series, the photographer pictured himself as Angela Davis, Martin Luther King Jr., Malcolm X, and other prominent figures.
Cindy Campbell recounts how her brother ushered in a new era of musical culture at a party she held in the Bronx in ‘70s.