Art & Culture / Why we need to recognise influencers as workers 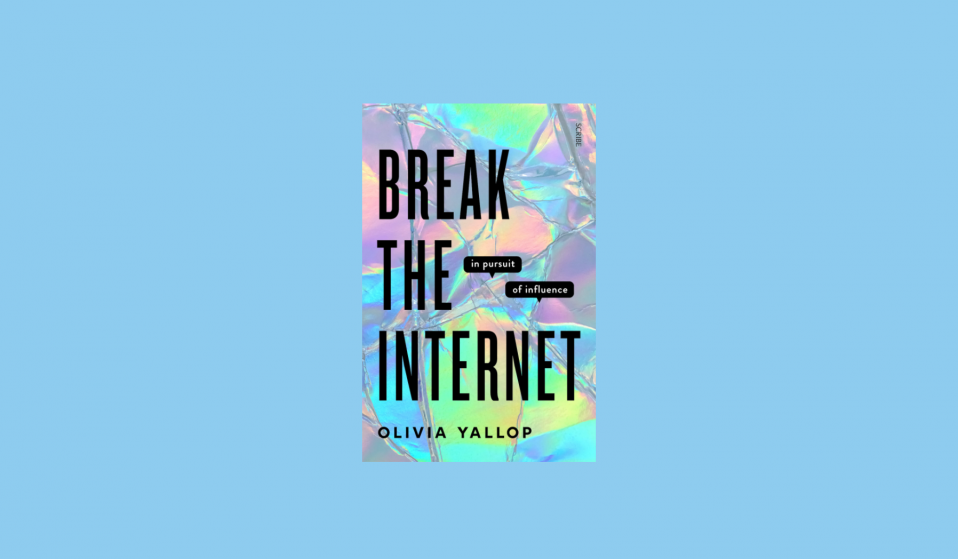 Author Olivia Yallop discusses her new book, which examines both the pitfalls and the transformative potential of online culture.

Author Olivia Yallop discusses her new book, which examines both the pitfalls and the transformative potential of online culture.

In her debut book, Break the Internet: In Pursuit of Influence, author Olivia Yallop delves deep into the influencer industry. By interviewing journalists, academics, venture capitalists, and influencers themselves, Yallop unpacks the often-gruelling process of turning yourself into a brand.

In the book, Yallop – who is a content strategist, trend analyst, and expert on internet culture – demonstrates what it’s like to be a social media star as she enrols in an influencer bootcamp; launches a YouTube channel; and stages a professional photoshoot in Notting Hill, illustrating just how much labour goes into influencing. While there are freebies, glitzy parties, and ‘brand trips’ to exotic destinations, Yallop also shines a light on the less glamorous side of influencing, discussing burnout, pay gaps, and gossip forums.

Yallop also stresses the importance of recognising influencers as legitimate workers who are in desperate need of proper rights, highlighting several of the most urgent issues plaguing the creator industry, which is, as she puts it: “an invisible tension between labour and leisure, home and work, private and public; feeling pressure to be always on, blurring boundaries, burning out”.

While only a tiny fraction of the global population work as influencers, the issues facing influencers are shared by all people precarious work. As Yallop says: “Influencers merely represent a more accelerated, more defined, more visible version of what non-influencers are experiencing every day.” Challenging the capitalistic conditions which drive things like burnout, poor job security, and blurred boundaries between work and leisure is something that will benefit all gig workers – influencers and non-influencers alike.

Huck caught up with Yallop following the release of Break the Internet to discuss online culture and the realities of working as an influencer.

You partly wrote this book over lockdown. How did that impact the writing and research process?

It was a really, really interesting cultural moment to be looking at influence because there was such a massive influx of attention towards the influencer sphere. Time spent on social media platforms shot upwards. So in many ways, I was able to write that as an embodied experience. The final chapter is very much about the impact of coronavirus in terms of it being an accelerator for the conditions of influence, and a kind of accelerator for the scope and scale of the influence industry as a whole.

I think it’s quite a common misconception that influencing isn’t really a proper ‘job,’ but as outlined in the book, it’s almost more like working 24/7. But do you think making it look effortless is quite an important part of being an influencer?

Influencers exist in this kind of strange double bind. They are simultaneously an everyman and a celebrity; on and offline; working and also in leisure time. There’s this sense of oxymoronic existence that’s really at the heart of being an influencer. As you say, influencing is labour, but the central philosophy upon which the whole industry is based is that being an influencer is getting paid to do what you love.

Influencer labour is intentionally abstracted and obfuscated, and thus influencing as an occupation is delegitimised as work. From a labour and rights perspective, influencers find it hard to organise against platforms or find it hard to combat unfair labour conditions because it’s not recognised that what they do is proper work.

If you look at the growth of platforms like YouTube and Instagram, we’re only starting to look back at them and say, ‘Oh, actually, they were able to build billion-dollar businesses off the back of what is essentially free labour from an army of unpaid user-generated content.’ We’re now seeing influencers unionising and vigilante groups coming together who are attempting to better the conditions of the incredibly precarious market.

While you were trying to become an influencer as part of the research process, you wrote that you felt “fatigued”. Is burnout a big problem among influencers?

Oh, absolutely. Mental health issues, burnout, and the relationship between individual experience and systemic context is a really, really hot topic. It’s not just that people are saying, “Oh, being on social media makes me feel bad about myself” – we are way past those conversations. What’s starting to happen at the moment is people are starting to link the psychological conditions of being an influencer with things like the algorithmic structure of influencer society. So for example, in what ways are the algorithmic conditions on TikTok facilitating massive disillusionment, disenfranchisement and worsening mental health?

I have a huge, huge, huge empathy for everyone who is an influencer and who makes their living through doing social media work because it is very misunderstood and underappreciated from a kind of broader cultural perspective, but also because it is emotional labour.

What do you think surprised you most while you were trying to become an influencer?

When I was writing this book, I was kind of setting out to prove things that I already suspected from having been an appendage to the influencer industry. So some things I wasn’t necessarily surprised by, but were definitely brought home for me. So for example, I always knew that influencing was hard work. But [then] I was faced with a laundry list of tasks relating to the never-ending process of self-optimisation – whether that’s personal strategy, or branding techniques, or content creation, or editing, or scheduling, or networking. I think in theory, it’s quite easy to say “Oh, I understand what it takes to commodify myself.” But in practice, I found it quite hard.

It takes a lot to package yourself and put yourself out on the internet. It’s not just as easy as snapping a few pictures.

I was really interested in the part where you discussed the influencer pay gap between white and Black creators and also male and female creators. Is there anything that can be done to address this?

I’ve spoken to a couple of different people about this. Adesuwa who runs Influencer Pay Gap [an Instagram account which exposes pay disparities between influencers of colour and white influencers] is incredible. Her answer to that would be that we need more transparency and accountability. So establishing frameworks for influencer rates, for example. There’s not really any kind of industry standardisation, and of course that can create massive inequalities in terms of how people value themselves.

Another influencer I spoke to is Stephanie Yeboah, who again is a great spokesperson for instigating change within the influencer industry. Her perspective on this was that it’s a hiring thing. The PR managers, the casting directors, the social media executives, and people who are in these positions are unfortunately still quite ‘stale and pale’, to put it that way. So Stephanie’s response would be that we need to increase the diversity of people on the hiring side.

I would also add that I do think inequality is baked into the influencer system on a technological level with things like algorithmic discrimination. It’s going to be a struggle whilst there are these underlying systemic causes of inequality.

You wrote that experts estimate the economy of influence will be valued at $24 billion globally by 2025. But beyond that, where do you see the industry heading?

I don’t believe all the naysayers who said in 2020 that this is the end of the influencer industry. I think there is a macro-level shift towards the kind of ‘influencerification’ of the everyday consumer. For example, I opened Twitter the other day and saw a TikTok of some M&S employees from Romford lip-syncing to The Backstreet Boys in the M&S depot. I am fascinated by the labour implications of that. What role does M&S the brand play in facilitating content creation from its staff members on the shop floor? Are the people in that TikTok being paid or recognised at work for doing that? I think you can spot patterns emerging in the expectation of the average user to participate in the influencer economy to an ever-increasing degree.

I would even argue that by us having this conversation via Zoom, we are vlogging in some way. Anyone who over the past year has been forced to join work remotely or go to a virtual classroom, framing themselves within a screen and lighting it well enough, has participated in the rituals of influencing. I think everyone is going to become an influencer. It doesn’t necessarily mean that everyone’s going to abandon their day jobs and make content around the clock, but it means that they are going to participate in the rituals of influencing to an ever-greater degree.

Break the Internet: In Pursuit of Influence is available now on Scribe.

Linkedin
RELATED ARTICLES
OTHER ARTICLES
Cindy Campbell recounts how her brother ushered in a new era of musical culture at a party she held in the Bronx in ‘70s.
The idea that a younger generation is abandoning work has become a popular narrative online, but it doesn’t necessarily reflect reality.
A new project is documenting formerly incarcerated people as they transition back into civilian life.
Yesterday thousands gathered outside Buckingham Palace after news of the Queen’s death broke.
Financial turmoil is pushing people who work in the sex industry into more dangerous and desperate situations as a means of survival.
Ahead of the release of their first collaborative album, the producer and rapper talk psychedelics and the state of UK hip hop.