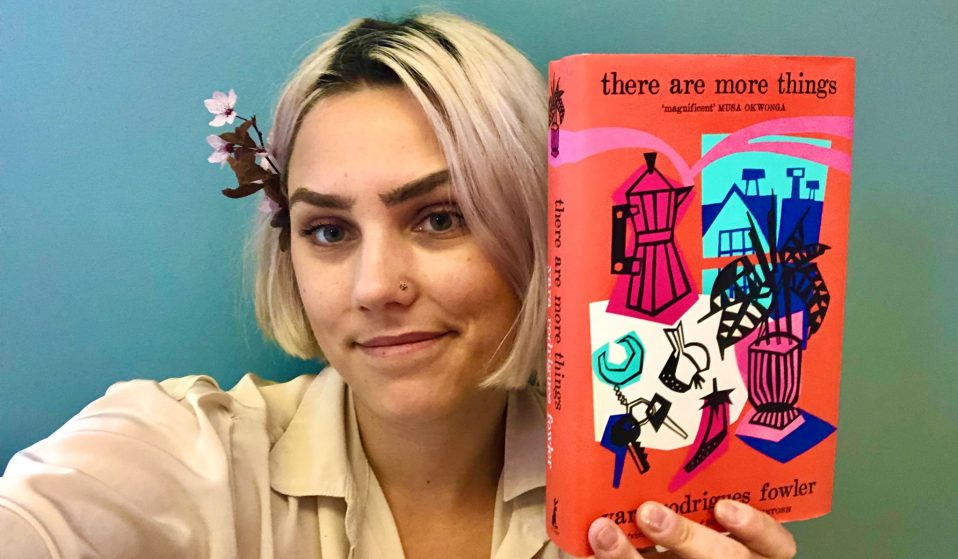 The author discusses her blistering new novel about history, revolution and queer love.

The author discusses her new novel which takes readers across continents and generations – from the London riots to Brazil's military dictatorship.

In the face of a cost of living crisis and looming recession, there’s no denying that our current political landscape is bleak. But if you look hard enough for it, hope can still be found. Whether it’s stopping the development of an oil field in Scotland, standing up against private developers or a group of young people staging a direct action against Priti Patel’s dehumanising immigration policies, stories of political resistance stand in direct contrast to the ever-growing sense of apathy and nihilism, acting as anchors for those who are fast losing hope.

But how do you write about such stories? And how do you turn them into contemporary fiction without sounding cringe or condescending? Yara Rodrigues Fowler is a Brazilian-British novelist and activist from London who manages to strike this balance in her latest novel there are more things. The 29-year-old captures the spirit of political hope and resistance by telling the story of Melissa and Catarina, two roommates with Brazilian roots living in an ex-council flat in East London.

The women meet in 2016 and slowly begin to share their lives with one another. Not only does the author tell us their stories, but she also writes of the things that came before, such as Brazil’s military dictatorship, deftly linking the past with the present. Their friendship, which blooms into a beautiful sisterhood, is the backdrop to a touching novel about history, revolution and love.

To mark the release of there are more things, I sat down with Yara to chat about the importance of intergenerational storytelling, linking international struggles and staying hopeful.

When did you first have the idea for the book and how long did it take you to write?

I first started thinking about the two characters, Melissa and Katarina, in 2016. I was interested in the idea of these two people who have different relationships to class and race and to Brazil and the UK. They’re both in London during this time, when there’s a surge in exciting left-wing activism, which I guess is the product of the 2008 crash, the migrant crisis, austerity and all these different things that come together at once.

Since 2016, I changed a lot and the world changed a lot. Dilma [Rousseff] was impeached, [Jair] Bolsonaro was elected; a lot of stuff [like Brexit] happened here, too. So what these characters were doing changed. Then I also had this idea for a historical section and that suddenly made the book a lot more exciting for me. On and off, it took about six years [to write].

The book’s main theme is one of political and radical hope. Why did this feel important for you to write about?

I guess I’ve been asking myself, what does it mean to write a revolutionary or radical novel, as opposed to one that has revolutionary politics, rather than liberal politics? I think asking those questions of form and feeling is quite tricky. However, what I felt sure about is that I didn’t want to reproduce this sort of very bourgeois, middle-class liberal way of interacting with art, where you consume something, it makes you feel sad, or whatever, it gives you this catharsis, and then you carry on with your life.

Liv Wynter did a play where one of the characters says something like: “If you’re hoping for a good cry, you should want better for yourself”. So it’s really important to me to write about politics and grief, but in a way that was agitating and exciting.

This is a political novel with a big P, what were the considerations you had when writing it?

All books and texts are products of the time that they’re made in, they just might pretend to be more naive to their politics. I wanted to lean into it and say: ‘This book does have a politics, that’s inherent and inevitable, I’m going to acknowledge it and make it my weapon.’

I tried to make sure that I was making something more expansive in the sense of time. I did remove certain polarising things in the very recent future that I thought if a reader came across them, they’d be like: ‘Oh this is a remainer book’ or ‘Oh this is a Corbynista book’. So Tony Blair is named and Dilma is named but Bolsonaro isn’t named, Trump isn’t named and neither are Corbyn or Boris Johnson.

Melissa and Catarina seem so different when we first meet them but their sisterhood develops in a very beautiful way, was this inspired by the friendships in your life?

I don’t have one person that is my Melissa or Katarina and equally, there are bits of me in both of them. It definitely came out of the relationships I was experiencing and the sense of family and home that I feel I have built with my friends. What I was really interested in was how relationships of sisterhood and family, where you’re not necessarily related, can be built. I wanted to show that identity isn’t really the basis of their friendship. It’s actually solidarity. And that’s what their sisterhood is built on – caring for each other, sharing resources and getting shit done.

You love playing with form and there are no speech marks in the text. What were the intentions behind the way you bend pages or play with words?

If the space on the page is a tool that poets can use to make the reader feel things or communicate feelings, then I think, why can’t the novel I’m writing also do that? That’s my thinking behind moving things around on the page and using prose-poetry to communicate feeling and controlling the pace and moving between timelines. I’ve been told that people who are dyslexic find it easier to move through the book and that makes sense to me, because it’s about how you scan it on the page, not just each word in sequence.

I was also influenced by growing up online with MSN – we do online punctuation with line breaks and we know that conversation doesn’t necessarily have speech marks. If you’re on Messenger and WhatsApp there are no speech marks. That probably does make it easier to read.

You ask the reader to play the songs on the page out loud and speak out loud. Why was it important that the book is a multi-sensory experience?

It’s aspirational when I asked the reader to play the songs out loud and speak out loud; I’m being really happily surprised by how many people are doing it and tagging me on Instagram being like, ‘Just read out loud from this book, kind of weird experience!’.

[By playing with the form] I want the reader to feel as conscious as possible, and that they’re not necessarily escaping into a different world. I’m not creating something cathartic that’s read and put down and then the person carries on with their life. I’m trying to create something that agitates the reader and makes them want to run out into the streets and be part of some kind of radical transformation or action.

The book flits back many years going all the way back to the ’70s and also locations (England and Brazil). Why was it important for you to write about radical hope from an intergenerational and international perspective?

I thought it was really important to address the current moment and link it to that other moment in time when revolution was really on the cards, and felt very possible – so possible, that dictatorships and whole empires were mobilised to stop it from happening. I wanted to talk about our generation as part of this fight that’s been going on for hundreds of years against capitalism, imperialism and settler colonialism. And I wanted to represent the part linkages between the generations.

So much of what you write about is rooted in love, even the way you capture grief is another form of love. What do you think is the characters’ relationship with love and how does it influence their political beliefs?

I’m a big believer in love as part of revolutionary practice. There is an Assata Shakur quote which says: “It is our duty to fight for our freedom. It is our duty to win. We must love each other and support each other. We have nothing to lose but our chains.” So in a lot of this book, the relationships of love are via blood family or chosen family.

Love is a big part of imagining a queer revolutionary way of organising our relationships with each other, in a world where we exist in community with each other, and we don’t value another person more because they’re related to us by blood or nationality. That all sounds very abstract and grandiose, but it was very important to me to show these chosen family relationships built on love.

Reading your book, I couldn’t help but think about much of the political apathy that we see today and how we can counter this by building movements that encourage people to make their voices heard, even if they are fearful. Were you hoping that for some people, the book might be a starting point in finding this strength?

I had an experience the first time I went to a protest or a meeting; I felt very embarrassed. Very embarrassed to chant. There’s a bit where Melissa is in the meeting and she’s chanting and imagining her boss watching her and how silly he would think she looks. I did want the reader to also have that experience of pushing through the cringe of feeling earnest about politics.

I didn’t want to say to people, ‘it’s really important you vote’, but I wanted to ask that we demand better than all of this. There’s so much more that we can ask for than what we’re being told we can have. I wanted to show that revolutionary desire isn’t pointless.

This interview has been edited for clarity and length.

there are more things is out now.

Linkedin
OTHER ARTICLES
Government plans to make it harder for people to go to university will only entrench inequality.
After news broke last week around an expected reversal of the 1973 landmark law that made abortion legal in the US, protestors gathered in the UK in support of American women.
Members of the collective share some of their reasons to run as part of #UnitedBySummits, a campaign that looks to uncover transformative power of the outdoors.
New legislation is set to make it more difficult to hold Israel accountable for its human rights abuses.
In the last of our dispatches from OFFF Barcelona, Rufus Deuchler and Vincent Gault discuss the future of creative process.
The government is scrapping the Human Rights Act in a move that will hit marginalised people hardest.