Art & Culture / Young people: This is your once-in-a-generation chance to change Britain 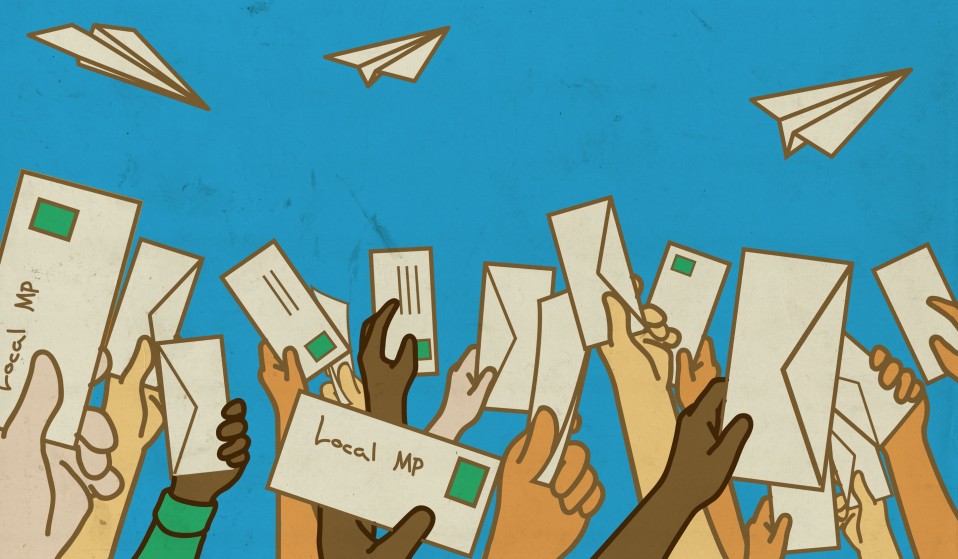 A radically different future is within our reach today. So why be disillusioned? Take a lesson from the people of Iran: get out there and vote.

A radically different future is within our reach today. So why be disillusioned? Take a lesson from the people of Iran: get out there and vote.

When I first became old enough to vote, I nearly didn’t. Living in Scotland, working part time in an Italian restaurant, and getting pissed most other days, I was more interested in £10 pingers than £10 minimum wage debates.

For most of my mates working in call centres, there was a feeling that voting wouldn’t change much. It wasn’t helped by the sense that the parties and what they were offering was all the same anyway. Voting for Labour, Lib Dem or the Conservatives was like voting for which flavour shit sprinkles you wanted on your soft scoop shit cone.

At the end of the day, if you were working in a call centre the week before an election, you’d still be working in it the week after.

Luckily my Iranian dad gave me a Skype-beatdown on the history of suffrage, and I voted. My party didn’t win but I took part. That was vital to him. It was absolutely obscene that I wouldn’t vote.

In Iran, where my dad and a boat-load of cousins, aunties and uncles still live, politics is an atrocity exhibition. Critics would say that the regime only bothered with elections for the spectacle of it all, to maintain a thinly veiled illusion of democracy to the rest of the world. Post-election protests in 2009 resulted in 36 voters being killed, and rampant stories of results being rigged arise every polling day. During the registration process for this year’s election, of the 1,636 individuals who signed up as presidential candidates 1,630 were quickly disqualified or deemed unfit by powers that be. The final two main candidates were the same leader they’ve had for 4 years – Hassan Rouhani, who has failed to deliver on most of his promises – or worse, Ebrahim Raisi, a cleric who wanted to set Iran back on a path of strict religious conservatism and isolation from the world.

So, you could forgive Iranians for feeling a little disillusioned when it came to last month’s general election. Instead, Iranians hit the polling stations like a force-12 hurricane on May 19. People queued for hours to cast their vote, and foreign correspondents spoke of crowds like they’d not seen in decades. Led by a record number of young people and women, the turnout was 73.07% (almost 10% higher than the UK). Gossip around young voters suggested a determination to make these results definitively un-riggable – you can fake a million votes, but you can’t fake 10 million.

All this is to say there is a defiant consensus among young Iranians that voting is bigger than any one person’s motivation or situation; voting is a means to exercise their historic rights, demand their presence be acknowledged, and hold the feet of power to the fire – no matter how futile they think it might be. It didn’t matter if neither candidate inspired hope, it was about stopping the situation from deteriorating any further. In the end, the moderate Rouhani won with 57% of the vote. Thanks to the youth, Iran remains open to the world, for another 4 years at least.

In Britain, we might have a poisonous mainstream media, Tory expenses scandals and rumours of nefarious psychometric persuasion techniques, but in essence we have a fully functioning democracy, with no Ayatollah who might just decide to veto the whole thing at any given moment.

Change can happen; overnight if we want it to. And yet young people are repeatedly struck by an epidemic of apathy that has made political upheaval seem utterly impossible. British turnout is almost 10% lower than in Iran, and among young voters it has dramatically decreased from 66% in 1992 to 43% in 2015. It has created a political landscape where parties no longer pander their policies to absent youth, and the result is the sad phenomenon that our children’s lives will be more crap than ours. For too long voting has felt like just another nail in our generational coffin, whichever way it went.

For the first time in decades, today is finally different. It is unique. It is a once in a generation offer; an opportunity to re-shape our country from the ground up and change our lives definitively. In Jeremy Corbyn’s Labour, we have a mainstream party offering a radically different future to the one we are set to inherit.

This isn’t Tony Blair’s Thatcher-lite or Gordon Brown’s Blair-lite. This is a future where further education does not come with an original sin style inevitability of extreme debt. One where free healthcare is celebrated and not persecuted. One where a disproportionate amount of young people aren’t forced to depression or worse by the cruelty of zero-hours contracts and job-centre sanctions. One where your wage is high enough so that you might one day be able to buy a house and a half-decent car, you know, like they did in the old days. This is something my Iranian cousins would kill for. We cannot afford to take it for granted.

Linkedin
RELATED ARTICLES
OTHER ARTICLES
Since 2007, Gideon Mendel has made 20 trips to document floods in 13 countries. The result is an alarming record of what has already been lost to the climate emergency.
A new film from Berghaus traces the story of Adam Raja, who left behind a turbulent upbringing to discover the healing power of climbing.
AI companies that develop image-generators using copyrighted artwork from the internet are coming under fire from artists who say that it amounts to theft.
A new exhibitions brings together the work of photographers who documented the deep unrest of these pivotal decades.
Following the release of his debut single, Deyaz talks battling addiction, dealing with his struggles through music, and building a budding music career from his living room.
A new law change is enabling Britain’s donor-conceived children to know the truth about their origins – but campaigners say the fertility industry must do more to protect people.