Outdoor / The adventurer trekking from Mongolia to London by camel 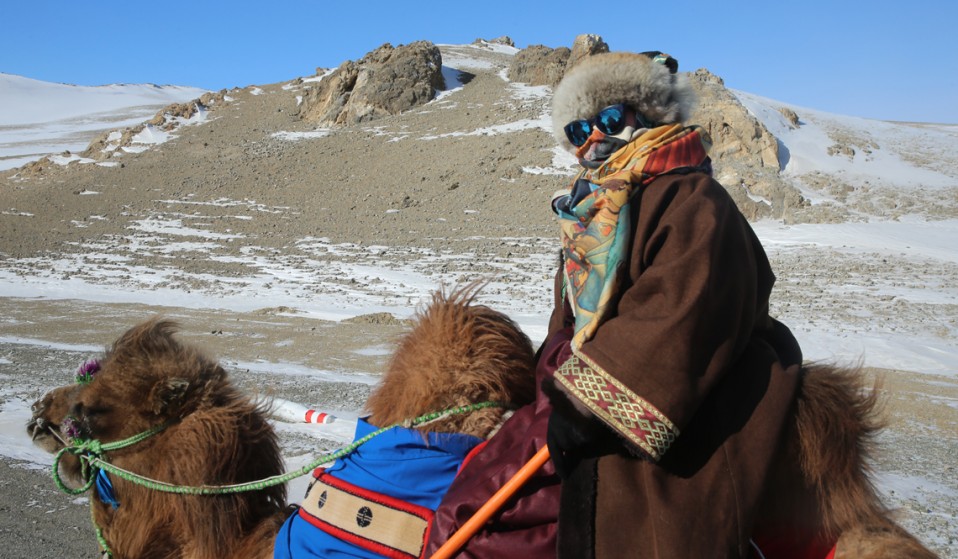 Baigalmaa Norjmaa is making a unique trip around the world. All that stands in her way is 12,000km, 14 massive countries and extreme weather conditions.

Baigalmaa Norjmaa is making an unprecedented trip around the world. All that stands in her way is 12,000km, 14 massive countries and the kind of extreme conditions that few other humans could tolerate. But this 30-year-old nomad is pressing on undeterred, determined to realise her long-held dream.

Baigalmaa Norjmaa is a 30-year-old adventurer embarking on a 12,000km trek from Ulaanbaatar, Mongolia’s capital, all the way to London. It’ll take three years, encompass 14 countries and require enduring temperatures as low as -50 degrees. “It’s not hard for me,” she says bullishly. “I’m Mongolian – I’m used to harsh weather.”

That said, Baigalmaa is only three months into the expedition and five of her original team members have already abandoned the tour – through a mixture of injury, illness or inability to cope. Baigalmaa (‘Baikal’ to her friends) has temporarily left the camp too, leaving her younger brother, a police officer and 10 camels just 480km short of the border. 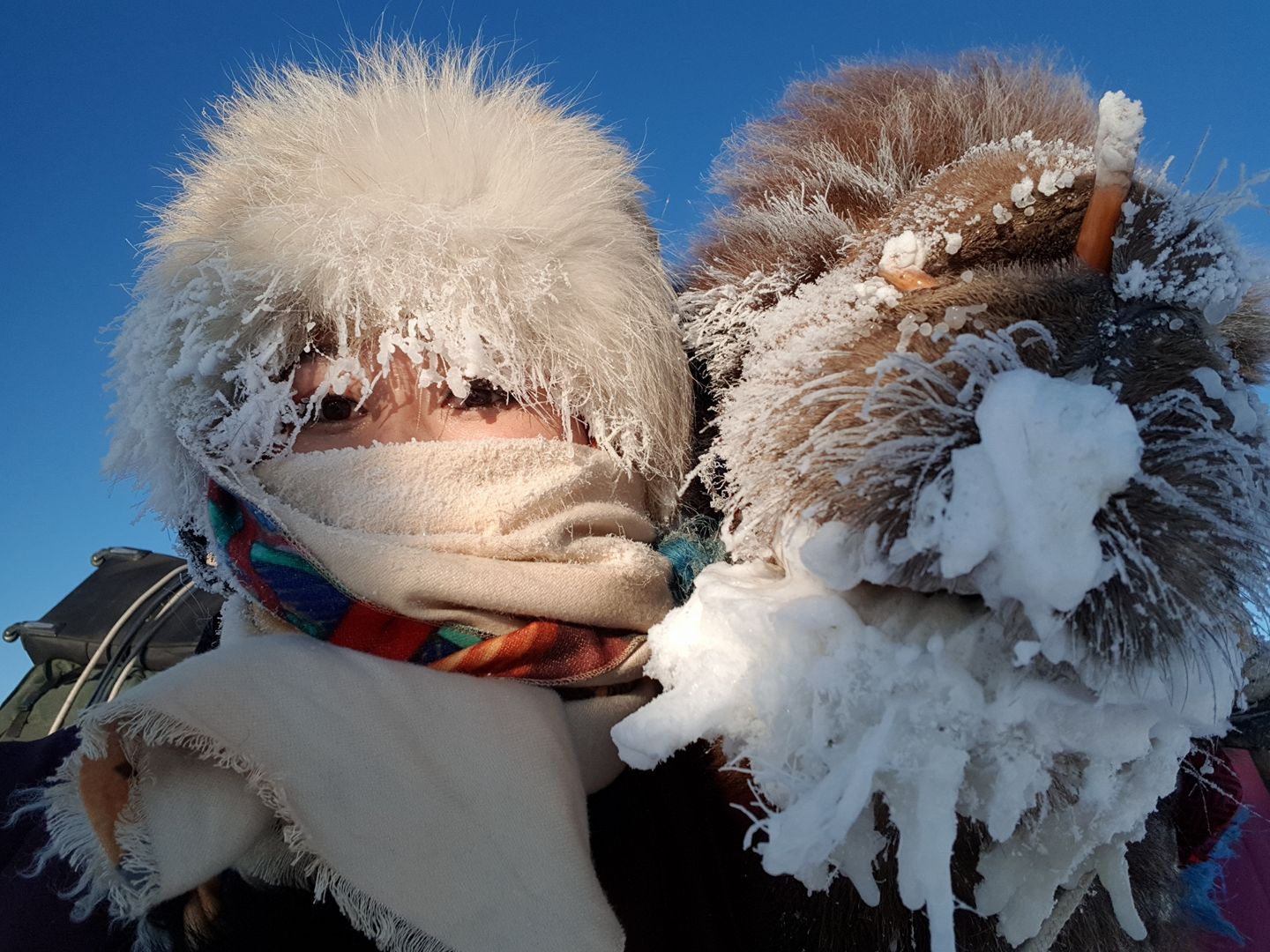 Baikal has returned to Ulaanbaatar to sort out some paperwork and meet with the Mongolian president to ease her passage along the ancient Silk Road trade route. Though the exact path is flexible, she’ll journey just as her Mongolian ancestors did: on Bactrian camels (the two-humped species native to central Asia) and wearing a Deel, a traditional Mongolian dress with ornate layers of cotton and fur – a sharp contrast to the black t-shirt she’s currently wearing.

Baikal’s sitting in her kitchen – a fairly modern set-up dotted with assorted ornaments – as a phone keeps buzzing beside her. The Mongolian national broadcaster MNB World is making a documentary about her life, spreading Baikal’s story across the nation and eliciting goodwill in the process. 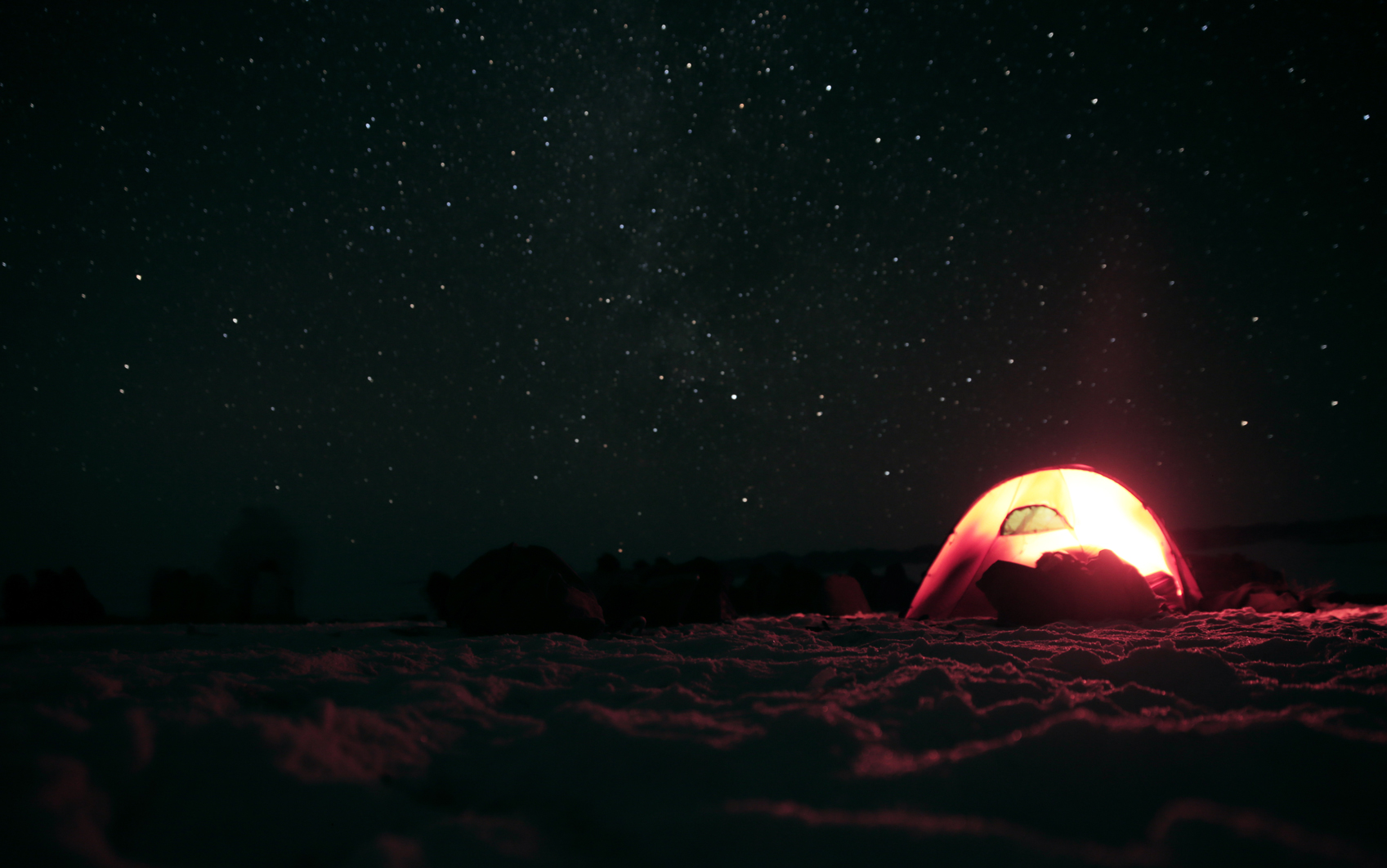 “People bring us food and let us stay with them,” she says, as her five-year-old daughter Dalai-Erdene plays with the family’s golden retriever in the background. She misses them badly out in the wilderness – along with her own bed and the use of an indoor bathroom – but takes comfort knowing that her mother looks after them.

Baikal’s parents were nomadic Mongolian herders, meaning she grew up moving from one grazing spot to another in the country’s north-west region, Ulaangom. The family cared for yaks, camels and cows, always managing to survive on the bare minimum. She left her family aged 16 to study, but it wasn’t long before she was back in the wilderness as a tour guide, thanks to her navigational skills. “I mainly started working in the tourism industry to improve my English,” she says, “but over the years I’ve grown fond of the adventure and adrenaline.” 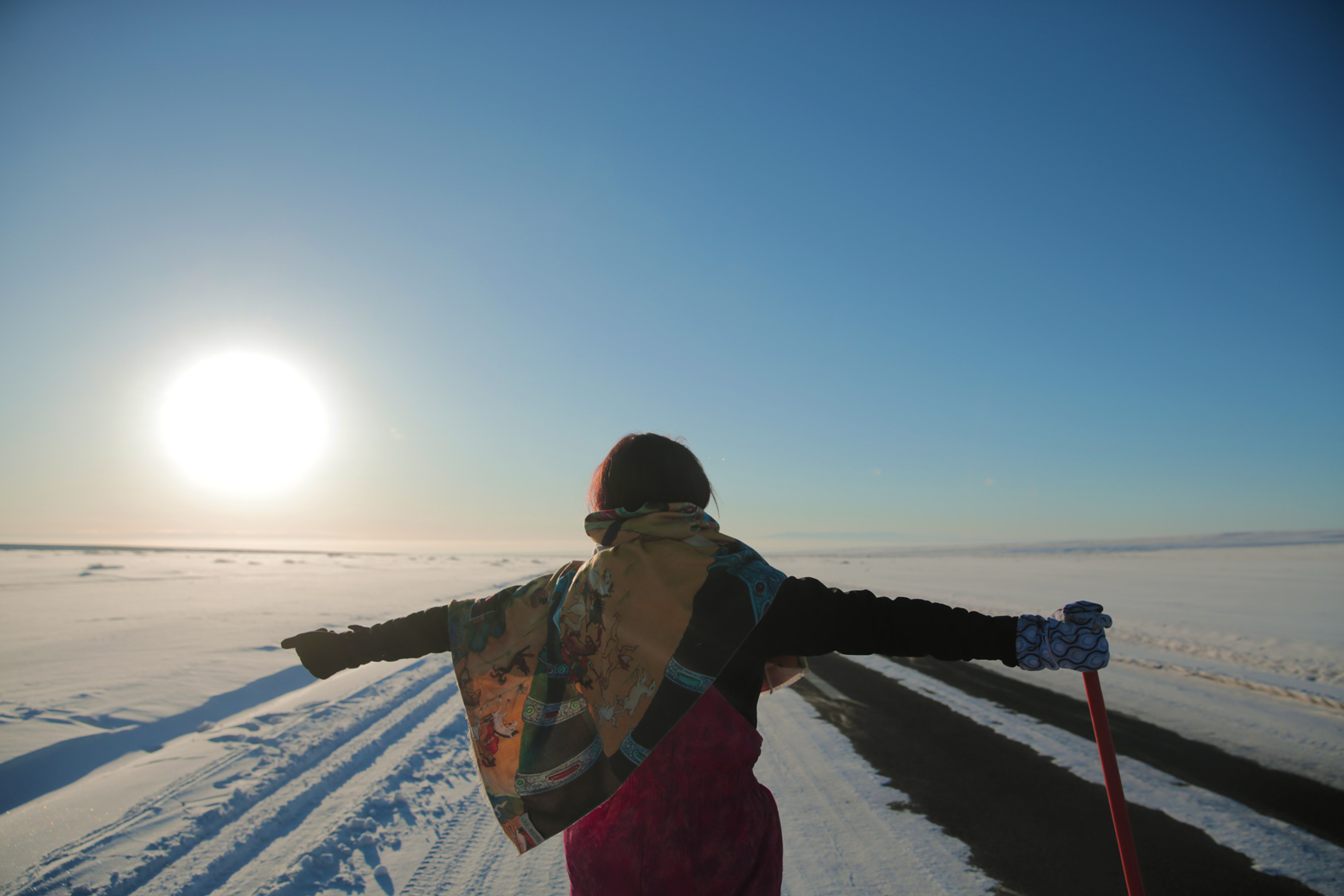 It was while leading those expedition tours that she met Australian adventurer Tim Cope, who inspired Baikal’s mammoth journey. “He travelled from Mongolia to Hungary by horse,” she says warmly. “I was jealous and thought, ‘If a foreigner can do this, then why can’t a Mongolian?’ Then I thought, ‘Well, what could be done next? Maybe a camel, like in the old days. It’s part of our history; it’s in our blood.’”

Although camels can cover more ground per hour than a horse, riding them across a quarter of the globe seemed like a fantasy. Then, in 2016, Baikal met British explorer and ex-paratrooper Karl Bushby. Karl has been walking continuously for nearly 20 years in an attempt to become the first person to circumnavigate the world on foot. Their paths crossed after he’d completed the Siberian leg of his challenge, and the pair talked expeditions over a glass of wine late one evening in the suburbs of Ulaanbaatar. 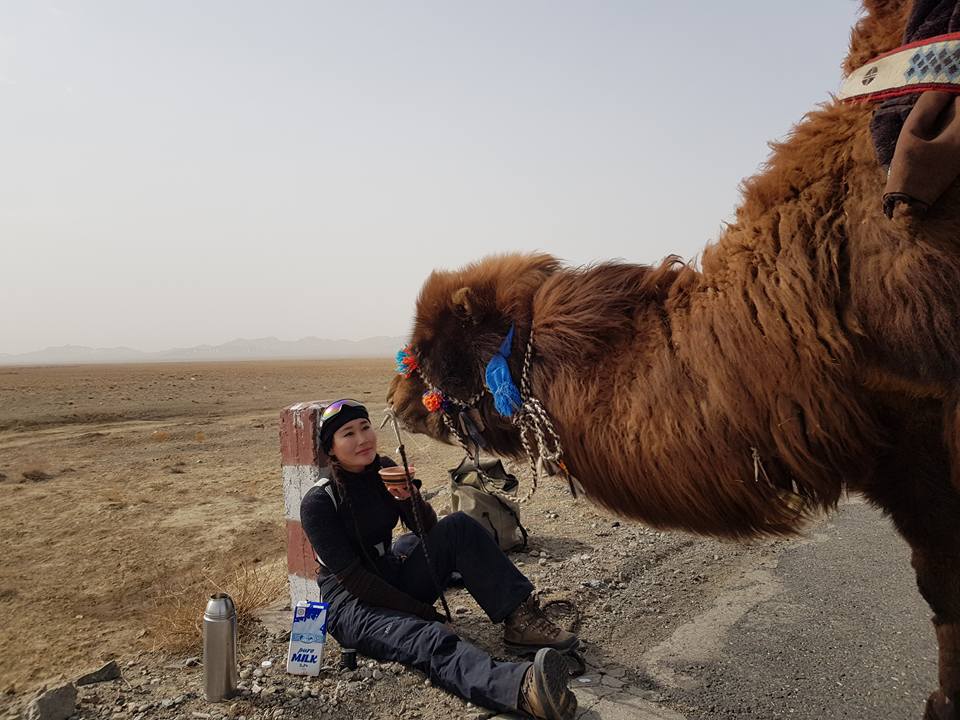 “I shared my dream with Karl, but admitted that it probably wasn’t possible,” says Baikal. “He said that many people have told him what he’s attempting is impossible, and that I should realise my dream.” That conversation sparked Steppes to the West (her name for the expedition) last July, with Karl joining the journey and helping to source team members. MNB World agreed to be a sponsor and 10 Bactrian camels were brought in from the Gobi Desert. The team set off in November, but things haven’t gone all that smoothly.

When bottled water isn’t available, the group turn to melting snow and ice, or just drink straight from the river. “It isn’t a problem for me, but others struggled,” says Baikal, who mixes unfailing positivity with a steely resolve. “Despite them having a lot of experience in solo travelling, Mongolia during winter isn’t as easy as people think.” The international team members gave up after about 400km, with vague talk of returning later on. 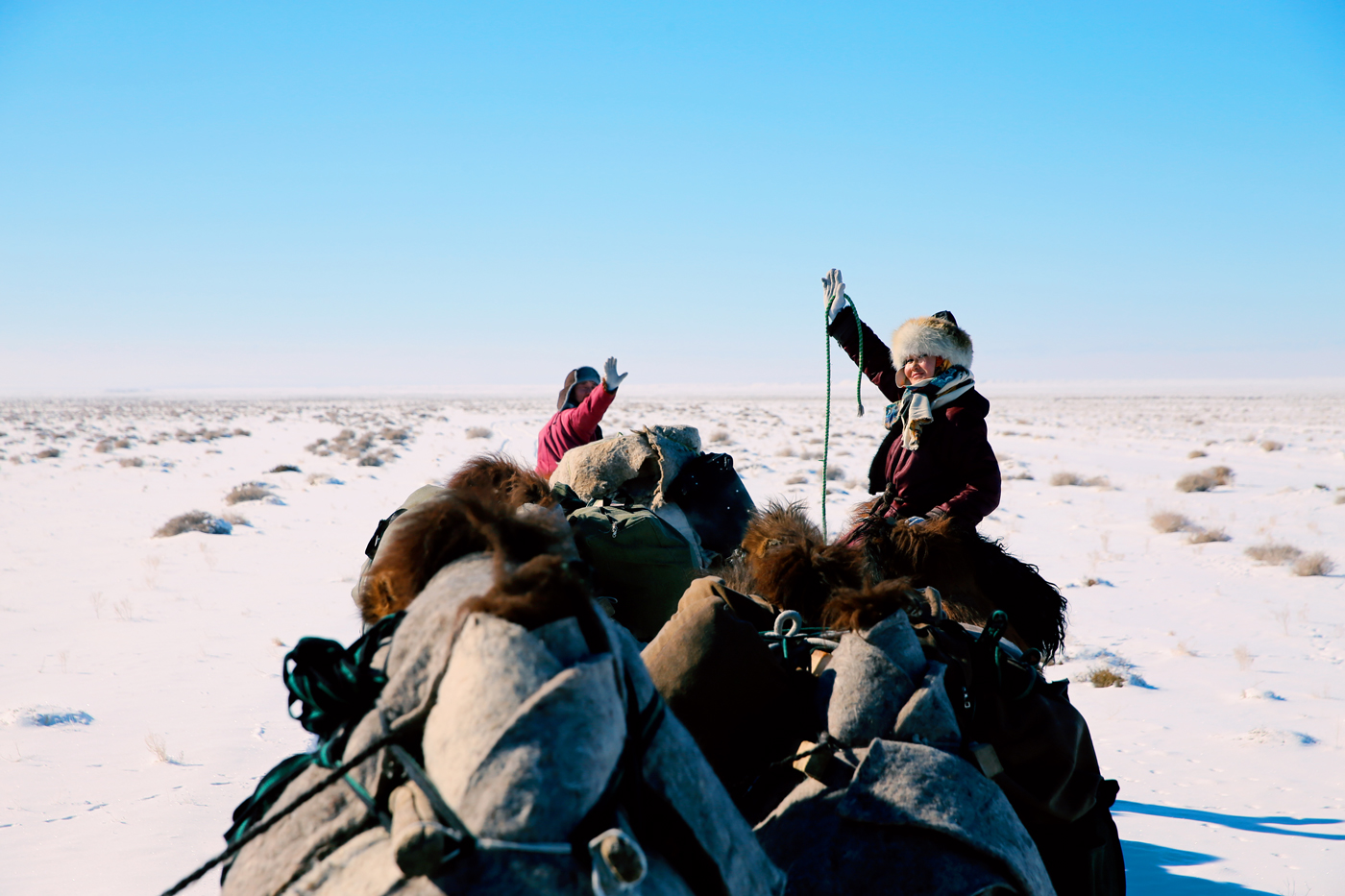 But Baikal was determined to make up for lost time, completing 600km in the space of just 17 days. “If there’s a small town or village within an achievable distance, I push to get there because I know I’ll be able to sleep in the warm, rather than out in the cold in a tent on a blow-up mattress!”

Baikal still has 480km to go before crossing the Chinese border – just four per cent of the journey – but she’s resolute about getting there within two weeks. “I’ve been inspired by my people’s history and hope to be able to show Mongolia to the world. But even though it’s a huge challenge with crazy conditions, I’m still in my comfort zone. It’ll only get really interesting once I get outside of it.”

Linkedin
RELATED ARTICLES
OTHER ARTICLES
A new report has found that the majority of Britains approach trans issues with compassion. It’s about time this was reflected by our media landscape.
Photographer Arthur Grace recalls travelling through the Soviet Bloc and finding ways to evade the surveillance of his work.
In the latest instalment of Photographers in Conversation, the chronicler of raves, protests and beyond explains why he’s drawn to such specifically visceral environments.
With inflation now at a 40-year-high of 9 per cent, demonstrations organised by TUC took place to demand action from the government.
Whether it's partygate, the climate crisis or the spiralling cost of living, the fightback begins on the picket lines writes Tommy Vickerstaff
The author discusses the all-consuming nature of heartbreak, and turning the experience into an incisive exploration of love and loss.