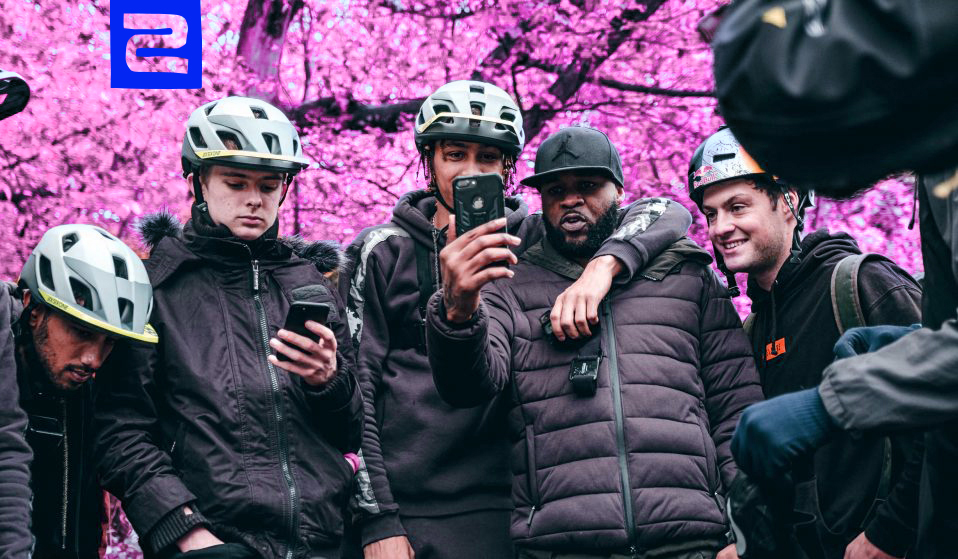 The capital’s free-riders head to Woburn in Bedfordshire, swapping the urban tarmac for the forest floor.

The capital’s free-riders head to Woburn in Bedfordshire, swapping the urban tarmac for the forest floor.

For the gentle folk of Woburn, Bedfordshire, a crew of 20 plus bikers wheelying through the centre of their quiet town isn’t a common sight. But today, wide-eyed pedestrians watch on as the young riders spin their way up the hill to the forested slope leads to Woburn Bike Park.

At their head are Red Bull freeride athlete Matt Jones and Mac Ferrari, founder of London’s BikeStormz crew. The collective is assembled from kids and young adults from across the capital, many of whom live in areas where gang violence and knife crime is a grim reality. Bikestormz offers an alternative, centred around riding bikes.

“It’s about unity, coming out and facing your fears,” says Ferrari. “Meeting people you can trust and build long-term friendships with, beating the stereotype of what people expect from you.”

The crew – the focus of Before The Storm, a 2018 Huck Doc – happen to be supported by sock brand Stance, who also sponsor Matt Jones. It’s thanks to their relationship with both that this meet-up today is happening. It’s the first time that many of the riders have been outside of London, and the first time their bikes have been ridden on anything other than tarmac, pavement or park.

Woburn is Jones’ hometown. The local trails are where he first got into the sport, and his own personal compound lies just outside of town, hidden by a line of tall trees with the top of the horrifically high start ramp just about visible. Wet, wintry weather means that it’s out of action but Woburn Bike Park – a collection of trails and dirt jumps in the woods just outside of the town – is ideal for an intro session on dirt jumping. 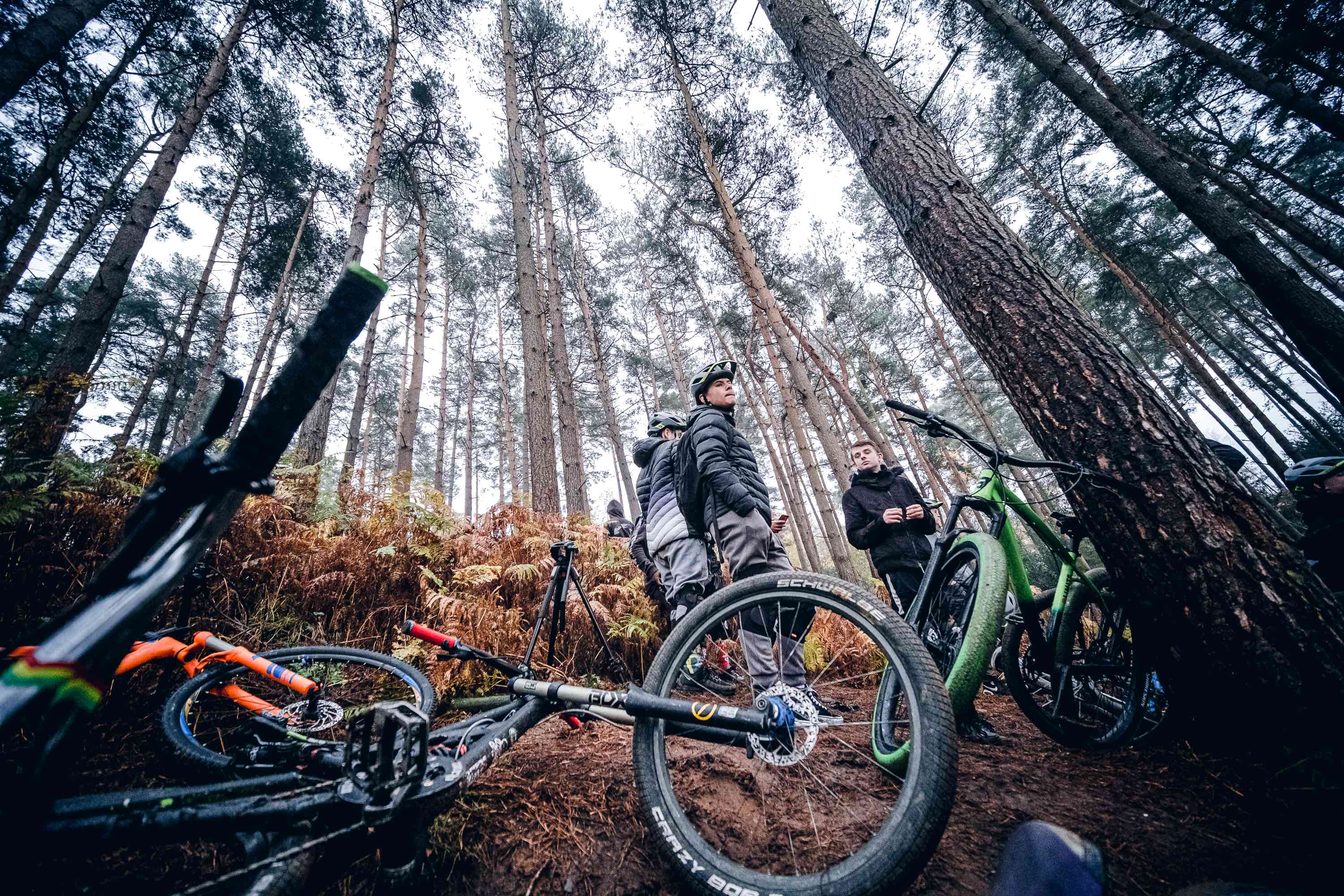 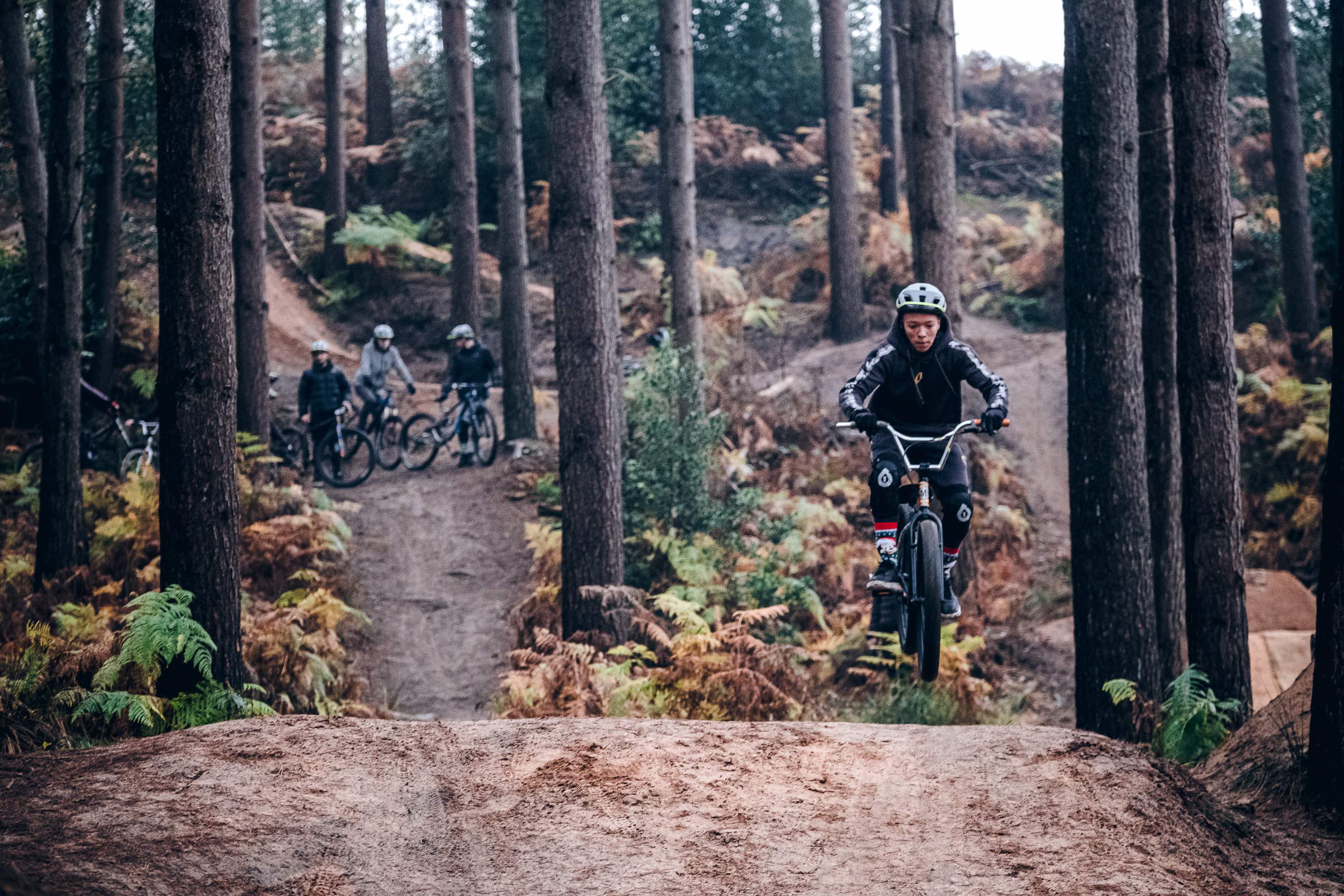 “This has always been my local stomping ground,” explains Jones, showing the crew around. “It’s where I discovered biking, where I discovered you could build jumps, hit jumps, do tricks. My whole story and everything I’ve ever achieved has all come from this place – it’s the foundation for the whole lot.”

Sandy soil, steep slopes and towering pine trees make the perfect playground for freeriders. Bermed trails snake through the trees – there are jump lines ramping up from gradual tabletops and gap jumps, through to 10-foot kickers with sheer faces that launch riders sky-ward.

Its terrain couldn’t be more different to the streets most of the crew are used to riding on. Slick tyres have little grip on muddy ground, but it’s quickly evident that while most of the crew haven’t ridden off-road before, they’re more than able to handle it.

If you ever needed proof that skills trump flash tech, the Bikestormz crew are it. Barely 30 minutes into the session and they’re railing corners, flying over a four-foot gap jump and pulling tricks with steadfast confidence.

“It’s funny, I’ve never needed to learn to wheely, and now I’m desperate to learn,” says Jones, laughing. “I’ve got the right people around to get better, that’s for sure. I’m going to come down to London – it’s going to be a role reversal! But I won’t be as good as these guys.” 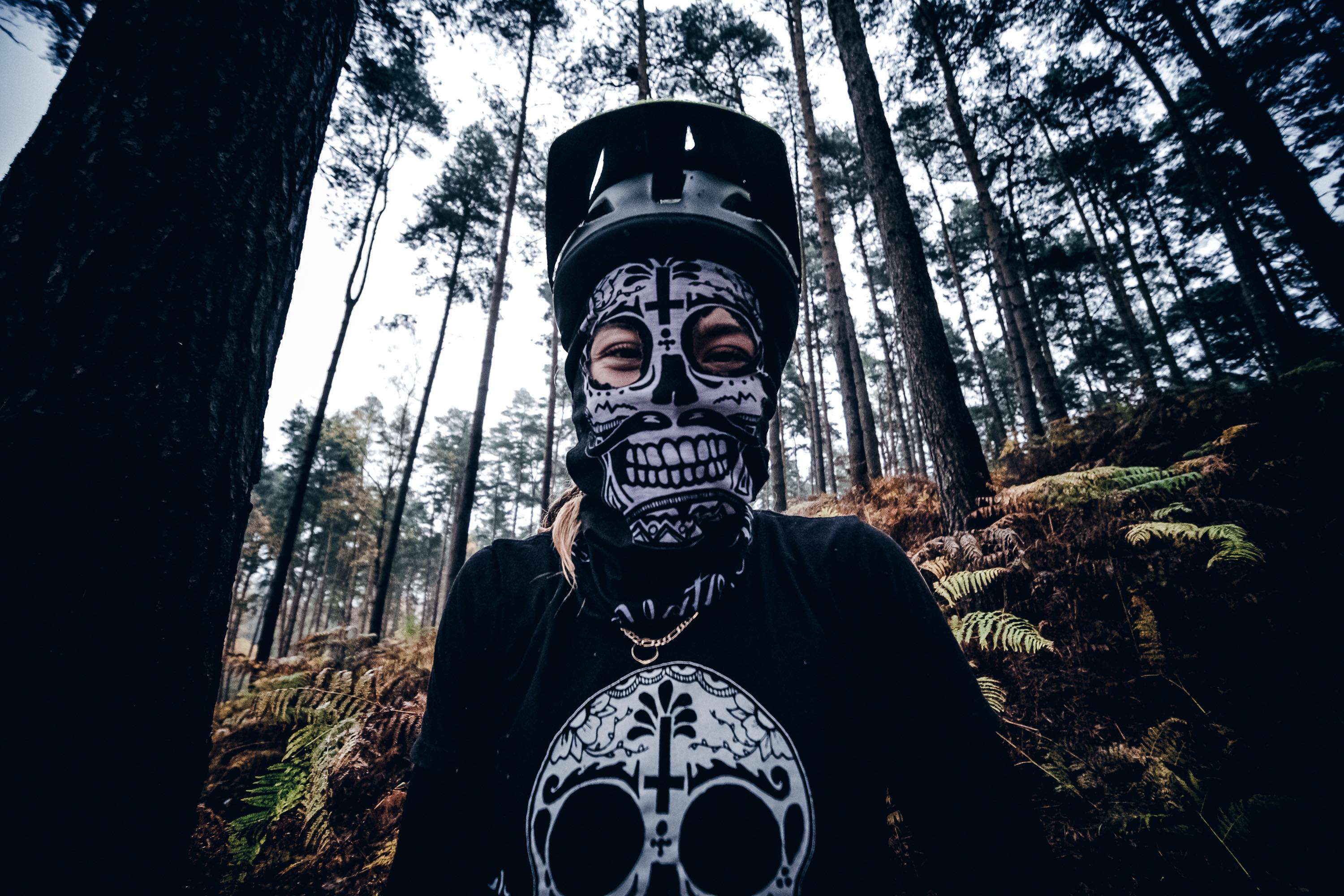 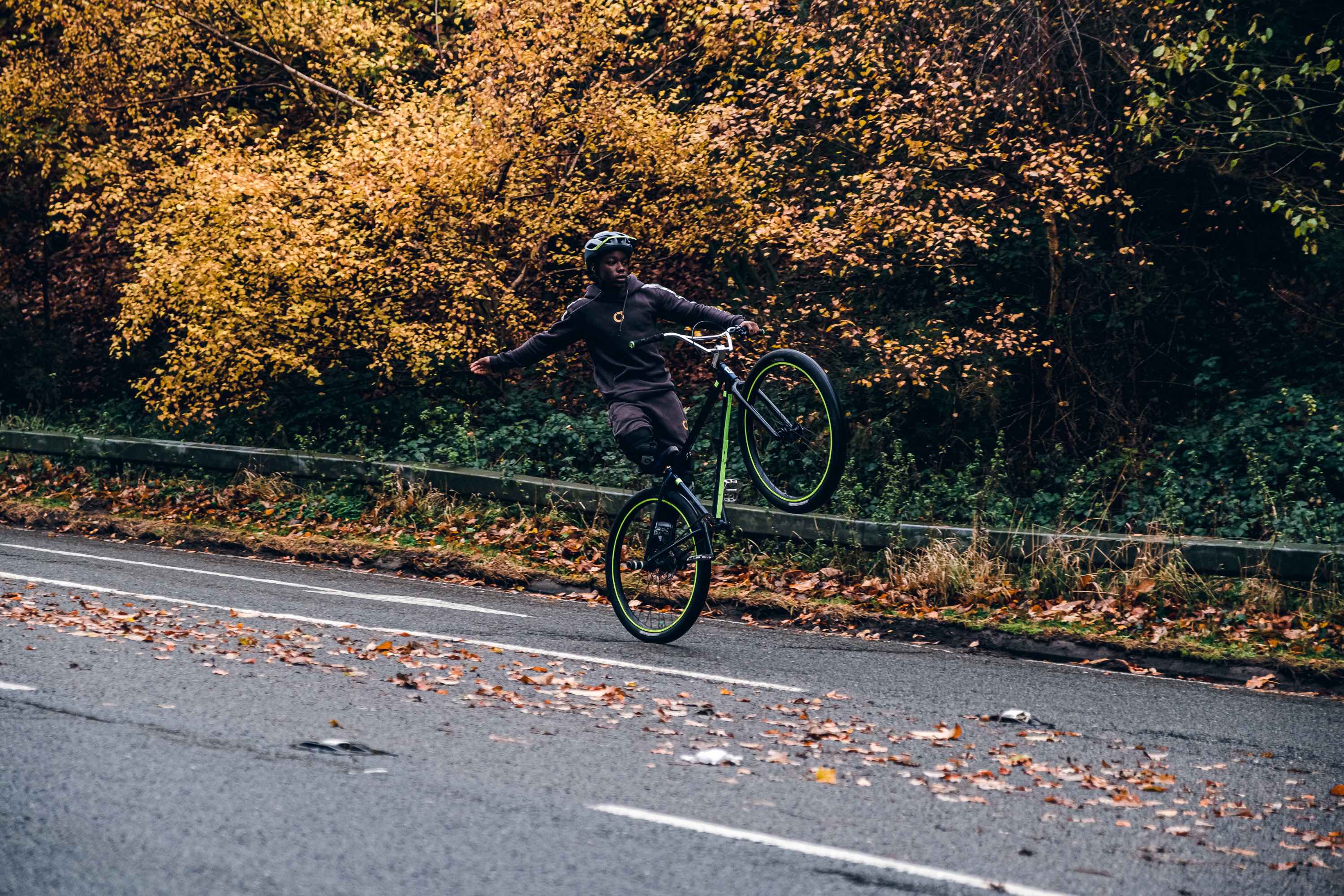 The skills and creativity honed on urban tarmac translates to an insane repertoire on the sandy soil of Woburn, made all the more impressive when you consider that most of the bikes had little or zero suspension and minimal tyre tread.

“In mountain biking, everyone’s chasing performance and times, and you end up with everyone riding similar bikes,” Jones says. “Here, there’s full suspension, there’s hardtails, rigid bikes, single speeds, gears, slick tyres, knobbly tyres – everything you could imagine. Yet the ability is really consistent. It shows it’s the individual on the bike that’s important, not the bike itself.”

“This has been a really cool opportunity, because I can’t imagine any of these guys thought they’d be as capable as they are, but they’ve got the right attitude, that level of motivation and that level of commitment and that’s really what it comes down to.”

One rider repeatedly wheelies up and over a jump, standing on the saddle on one leg and reaching his other leg through. Another grabs the ground behind him as he rides the trail on his rear wheel. A girl rider with a sugar-skull mask clears the tabletop, landing on the downslope and skidding to a stop before pushing straight back up to do it again.

“The cross-pollination of skills has been incredible,” Jones adds. “I’ve seen tricks on bikes today that I’ve never seen done ever, no matter whether you’re talking professionals or amateurs. I’ve been inspired.” 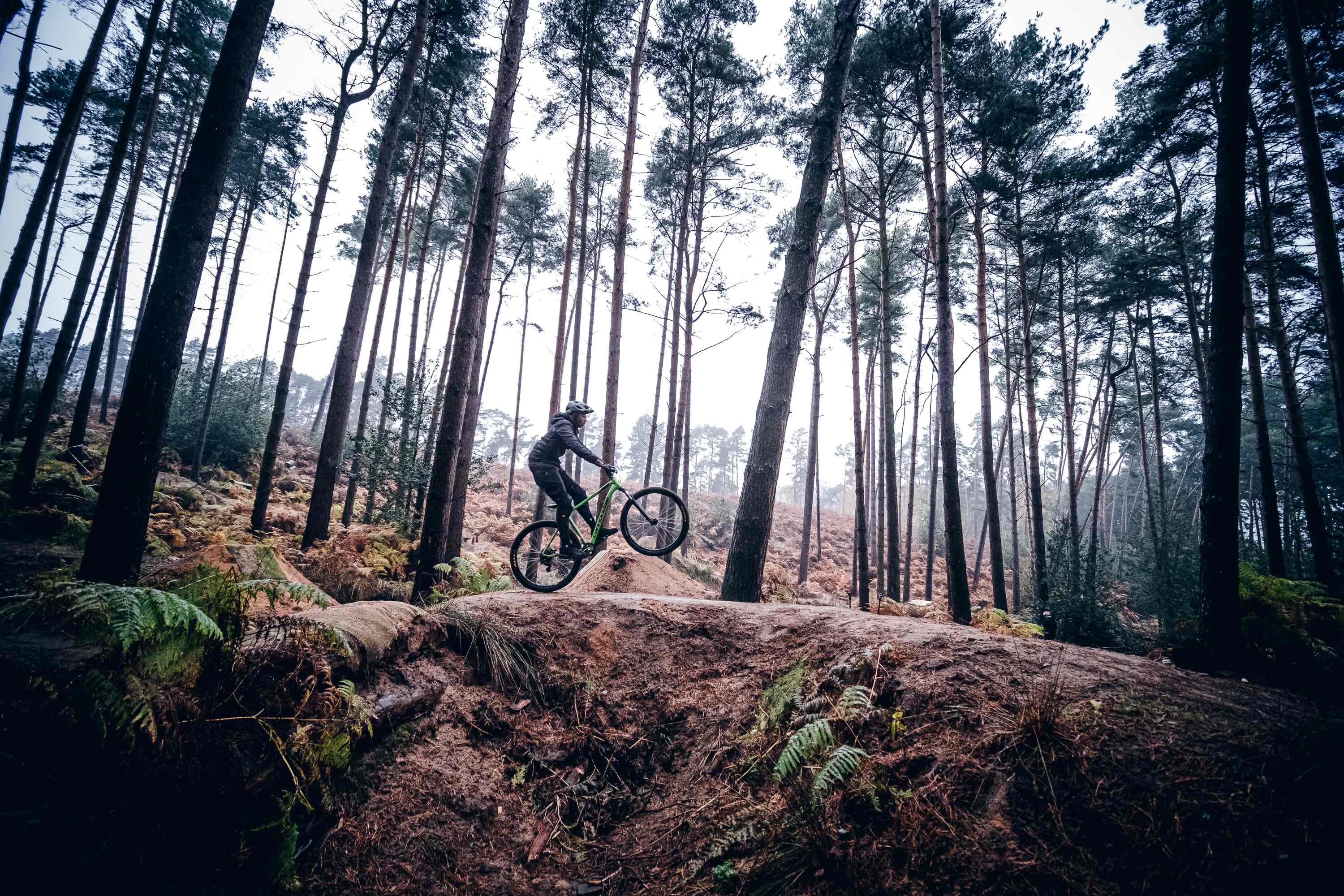 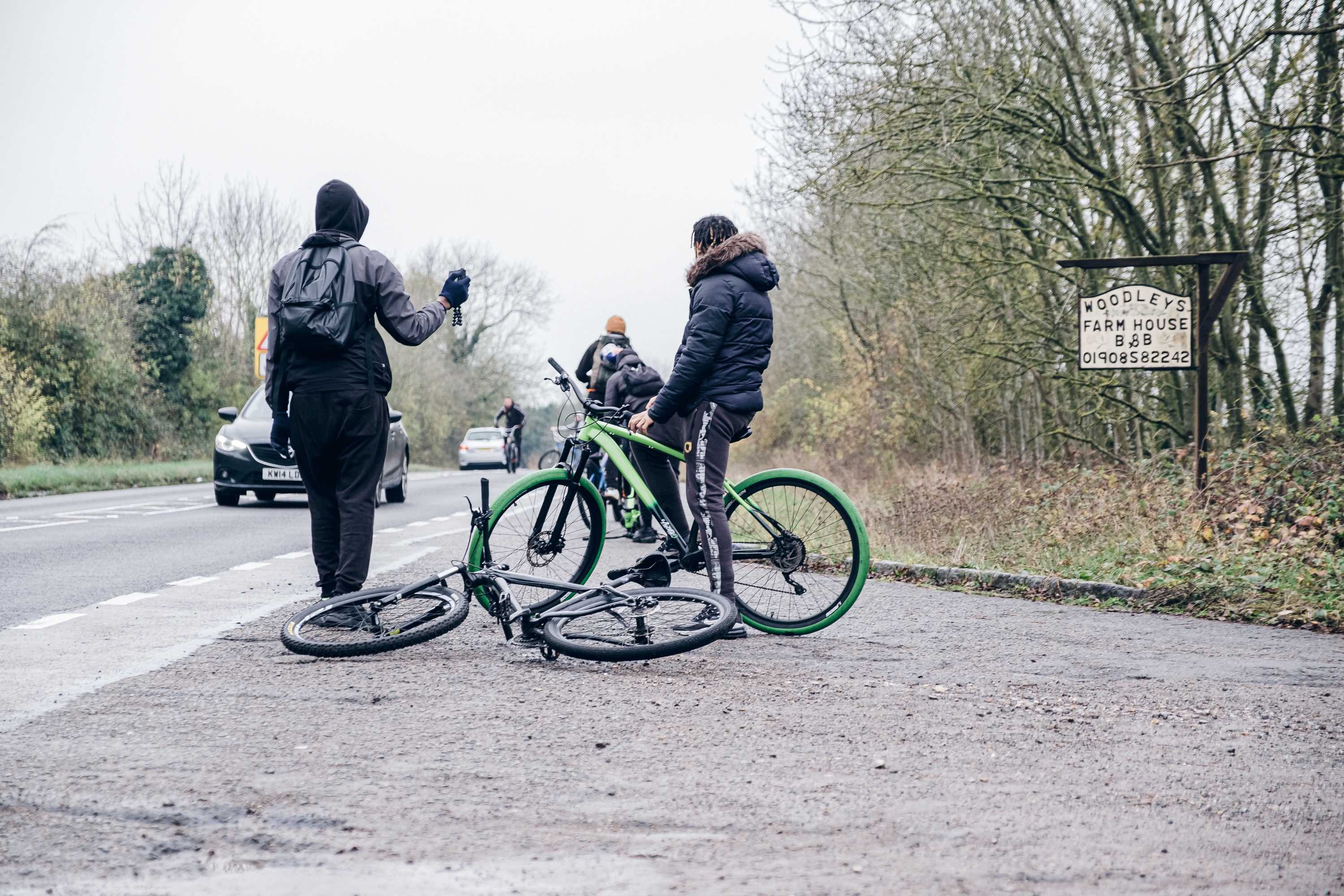 Jones, camera in hand, calls encouragement, captures the action and feels part of the crew. The air is full of chat and cheering, the vibe is supportive; this is a group of mates out riding bikes, and that’s a big part of what Mac wanted to create.

“Bikes are the common ground. It doesn’t matter if you’re a doctor and someone’s a bin cleaner, the bike levels everyone and takes away all prejudice. If you can ride, that’s our thing,” he says.

“I see boys in an environment occupying their time with something positive and fun and for me, I can’t explain the feeling, it’s almost electric. You see them smiling and you know what they could be doing. I know where they come from, a lot of them.”

On a steep downslope, some of the crew drop straight in, while a few who are more tentative are encouraged and cajoled by turns to give it a go. After a few false starts, they’re cheered down the slope and celebrate hands in the air when the line’s been run.

Capping it all off, Jones relocates everyone to the larger jumps. No one’s going to try these but him since they’re all about eight to 10-foot-high, perfectly sculpted slopes of sand, and Jones drops in time and again, pulling backflips and whips and bar turns as he goes. An older lady, wearing a padded jacket and out walking a curly-haired white dog, pauses to watch. “I wish they’d come here more often,” she says, before breaking into a smile. “They look like they’re having fun.”

Linkedin
RELATED ARTICLES
OTHER ARTICLES
As she gears up for the release of her first book, the 24-year-old climate activist talks standing up to authority and building a more inclusive movement.
Activists and campaigners are fighting back against new laws that would seriously undermine the ability to take industrial action, calling it an attack on fundamental workers' rights.
After building his reputation covering the US civil rights movement in the 1960s, the photographer went on to produce some of the most enduring images of the past century.
AI companies that develop image-generators using copyrighted artwork from the internet are coming under fire from artists who say that it amounts to theft.
After blocking the Scottish government’s gender recognition reform bill, Westminster is now devising further changes to the law to make it harder for trans people to self-identify.
Photographer Becky Tyrell went down to the fading banger and stock raceway to meet a community desperate to keep it alive.