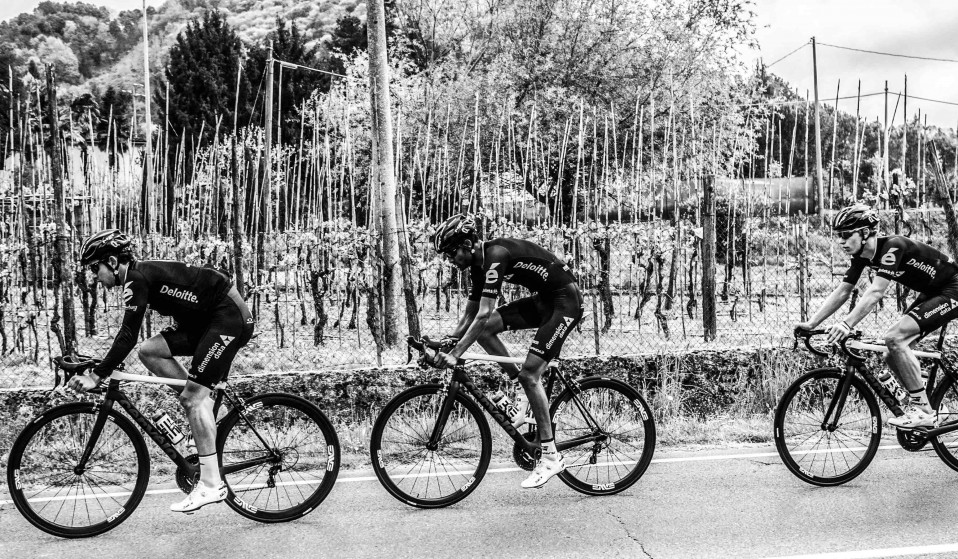 Team Dimension Data for Qhubeka are a pan-African cycling team helping to bring thousands of bikes to kids across the continent.

Team Dimension Data for Qhubeka are a pan-African cycling team helping to bring thousands of bikes to kids across the continent.

There’s a Vespa scooter hurtling down a country lane outside Lucca. Not an unusual sight in rural Italy, but this one is being pursued by four cyclists pedalling flat out. They’re strung out in a line, one behind the other, taking advantage of the scooter’s slipstream to keep the pace high. Passersby turn their heads in surprise, but it’s all just a regular training session for Team Dimesion Data for Qhubeka, an African pro-cycling team making sporting history and using cycling as a tool to transform their continent.

In 2015, the Qhubeka squad became the first African team to compete in 112 years of the Tour de France, cycling’s most iconic race and arguably the toughest sporting event in the world. This year, they made history again as the first African team to achieve World Tour status, the highest level, from cycling’s governing body, the UCI. They also fielded a squad in all three of cycling’s most prestigious grand tours: the Giro d’Italia; Vuelta a España, where they won the King of the Mountains classification; and Tour De France, in which they picked up an impressive five stages wins. 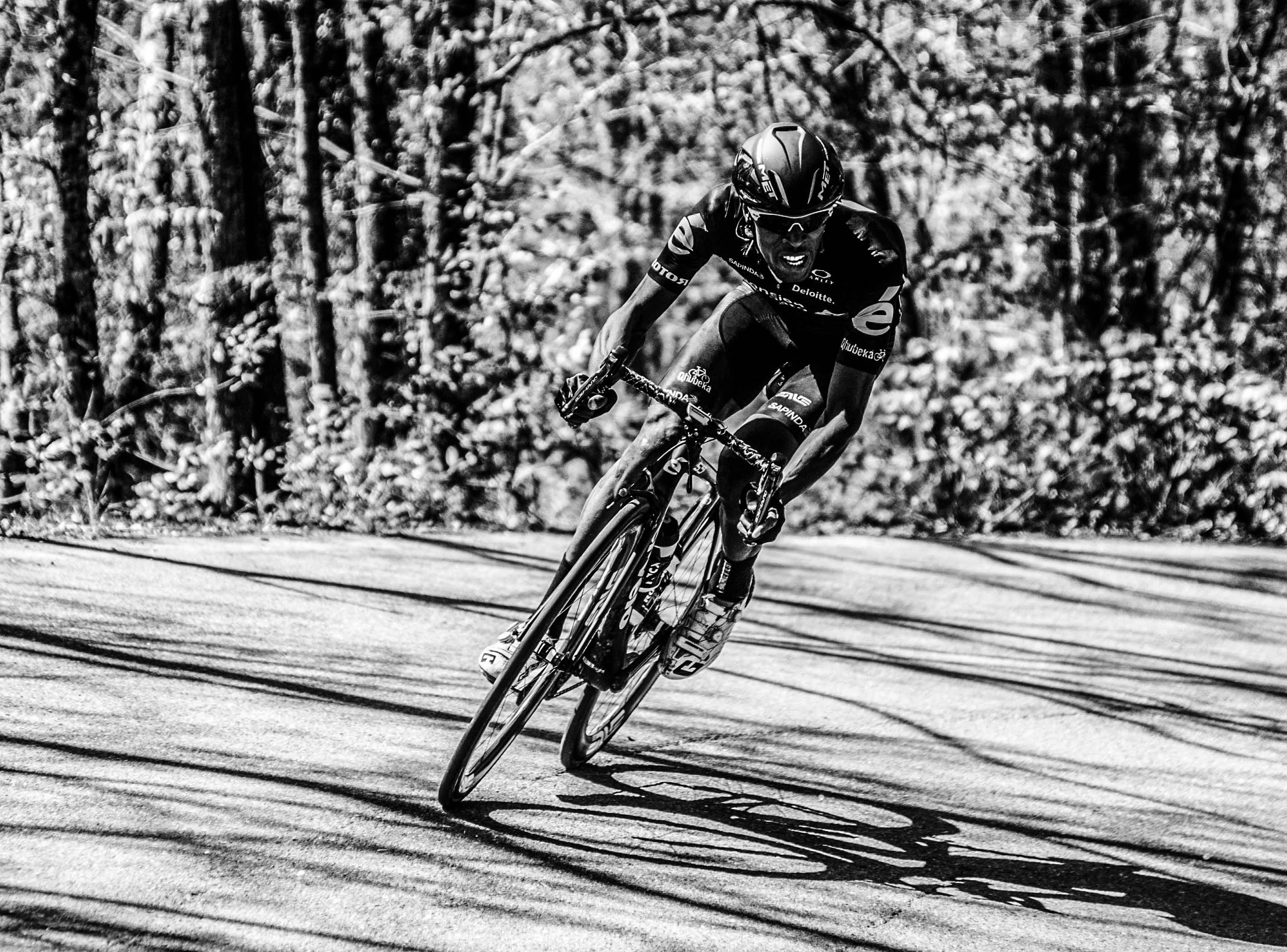 The team and its extensive development program unite Africa’s biggest cycling talents with elite riders who race together in support of Qhubeka, World Bicycle Relief’s program in South Africa.

Qhubeka believes that mobilising people with bicycles through their work-to-earn programs increases access to education, healthcare and economic opportunities. The charity has distributed over 54,000 bikes in South Africa and elsewhere since 2005, and the pro team is fully behind their drive to donate another 5,000 this year.

Every time the team pulls on their Qhubeka racing jerseys, they’re supporting the charity, and a percentage of their prize money goes directly to its work. “For me and the rest of the team, Qhubeka is really important,” explains South African rider Songezo Jim, over the phone after a gruelling stage of the Giro d’Italia. “We ride to mobilise kids in Africa.”

Songezo moved to Cape Town from rural Mthatha in South Africa’s Eastern Cape when he was 14 years old, after the death of both of his parents. Qhubeka works in marginalized communities across the country, much like the township where he grew up. “I used to walk an hour to school, too,” he remembers. “If I had a Qhubeka bike when I was younger, it definitely would have had a huge effect on me.”Bikes help cut the journey time to school, which has been shown to significantly improve kids’ grades and attendance.

Songezo only learned to ride a bicycle at 14. His journey from township to competing at the highest levels is a testament to the transformative effects cycling can have. “When I got into cycling, things got better and better,” he says. “My life is really improving now.” He’s determined to share the same opportunities with others through Qhubeka and to support the Cape Town cycling club that gave him his start. 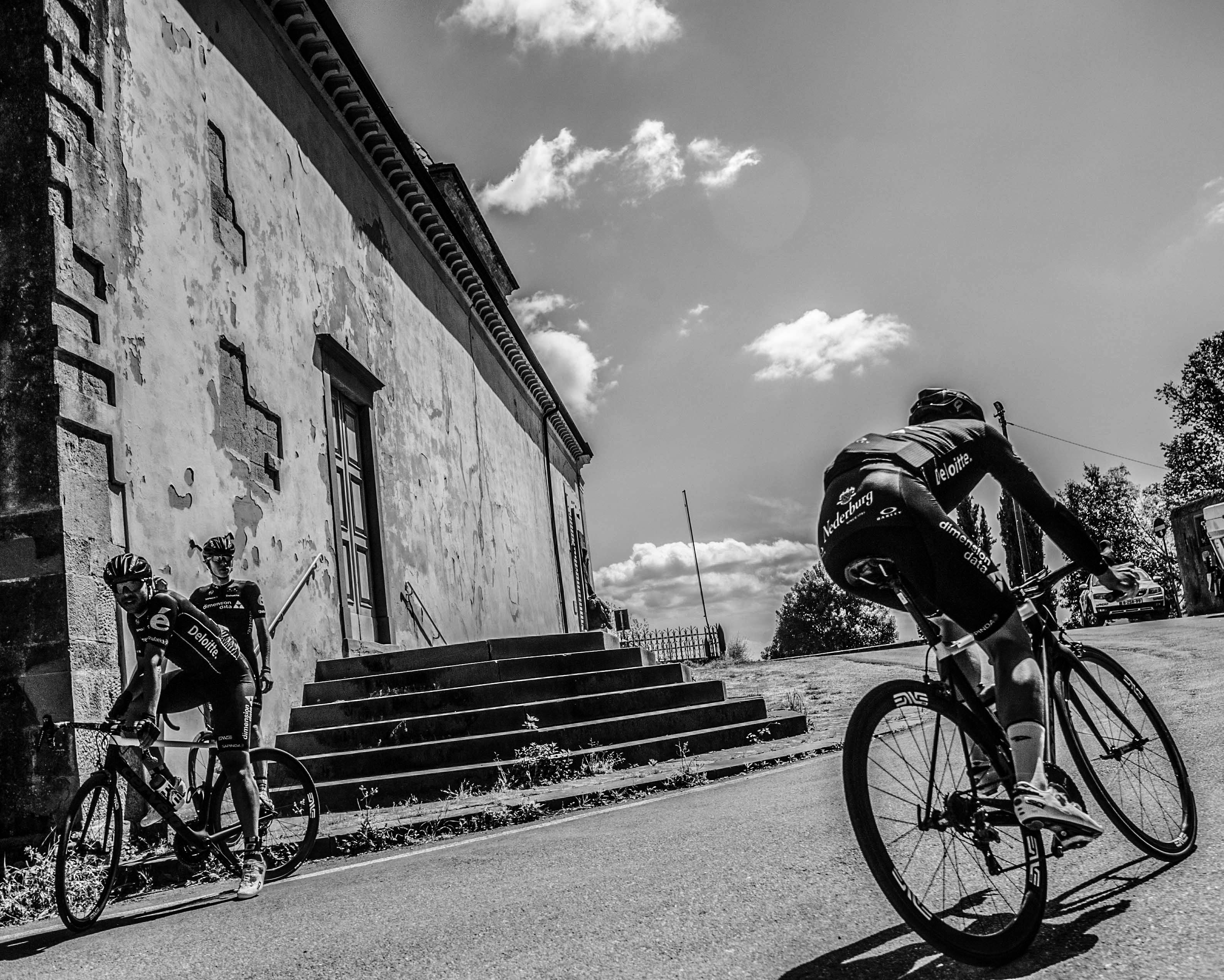 The determination to give back is shared by his teammate Adrien Niyonshuti, who speaks to me from the team’s training base in Lucca. Adrien survived Rwanda’s 1994 genocide by hiding under a mattress as family members were killed. He went on to place third in the Tour of Rwanda at age 16 on a borrowed bike and represented his country at the 2012 Olympic Games. “I always ride my bike because of my past,” he says. “Just look forward and focus on the ride. If you think of other things, you will cry.”

Adrien has used his success to found an academy that’s training 25 promising young Rwandan cyclists, including the country’s first female pro. Working with Qhubeka to distribute bikes, he’s seen how they’ve helped people open small businesses and allowed healthcare workers to more than double daily home visits to patients. “I have seen the difference Qhubeka bikes have made in Rwanda,” he says. “I love this charity so much because it’s helping people across Africa. Qhubeka’s message that a bicycle can change your life really is true.”

Linkedin
RELATED ARTICLES
OTHER ARTICLES
Filmmaker Laura Poitras discusses her new documentary which traces the remarkable life of the artist-activist and the impact of her battle against the US opioid crisis.
At his West Bank restaurant, Fadi Kattan established himself as the voice of modern Palestinian cuisine. Now, he’s bringing his innovative, bold flavours to the UK’s capital.
A new law change is enabling Britain’s donor-conceived children to know the truth about their origins – but campaigners say the fertility industry must do more to protect people.
David 'Dee' Delgado’s photo project is about honouring and uplifting the city of his youth, and a world rapidly disappearing under the relentless onslaught of gentrification.
Activists and campaigners are fighting back against new laws that would seriously undermine the ability to take industrial action, calling it an attack on fundamental workers' rights.
As she gears up for the release of her first book, the 24-year-old climate activist talks standing up to authority and building a more inclusive movement.