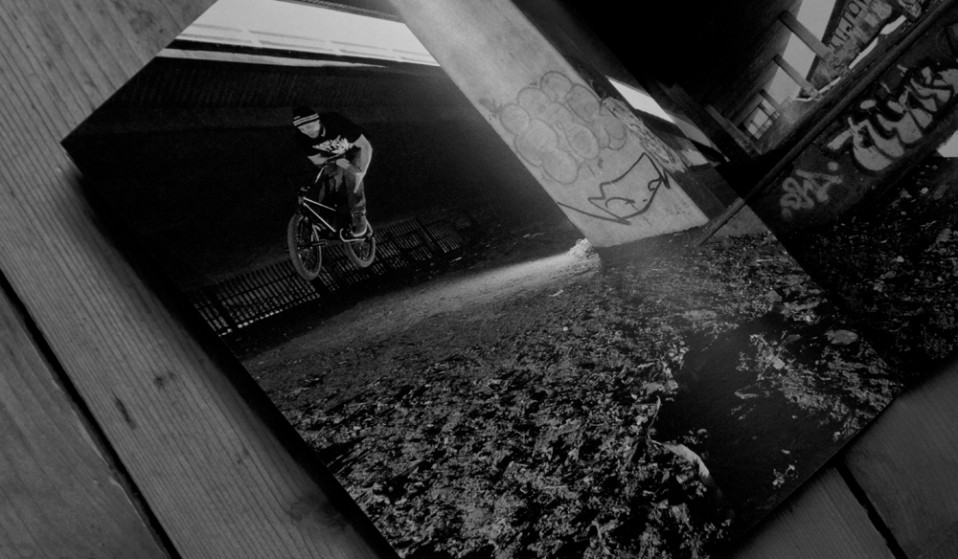 Not like it’s a competition or anything, but BMX zines have been trailing way behind their skate zine brethren for years.

But that could slowly be changing, as more and more BMX photographers are taking on the challenge and raising the bar – in quality, variety and output.

Joe Williams, a photographer based in Exeter, UK, has thrown BlackBlock into the mix, a BMX zine-come-travelogue that connects riders in the South West with Latvia’s growing scene.

Divided into three chapters on Bristol, Smere in Latvia and Exeter, the striking black and white photography mixes travel snaps with some serious riding prowess – all artfully composed.

We reached out to Joe to find out more. 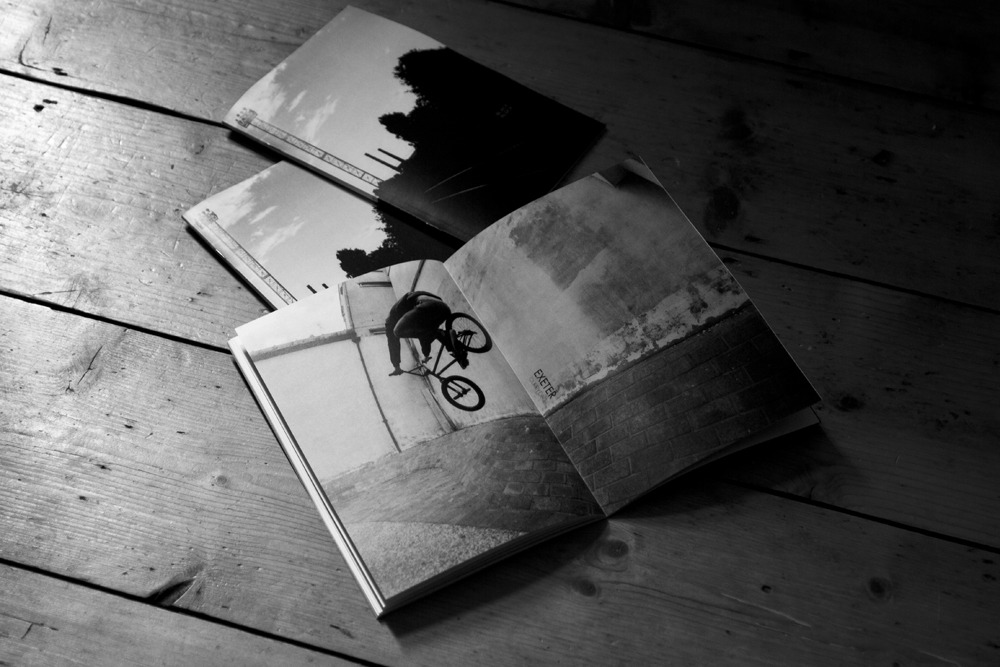 What’s BlackBlock all about?
Issue #1 is basically a collection of 35mm and digital photographs I have been shooting since last summer. After years of adamantly shooting film and trying my hardest to focus my photography away from BMX, I finally realised it was time to capture my crew. I actually put together the initial design for this zine in September 2015 then my hard drive suffered from a break down and I lost everything.

The final zine, although a little later than expected is the result of a handful of low-res images pulled from the internet, unprintable in anything but a zine, a bunch of re-scanned 35mm shot in Latvia during the summer and a collection of images shot in Exeter this year.

I moved from Bristol to Exeter in October so there are three logical chapters: Bristol – Latvia – Exeter. Ultimately the crashed hard drive was a nice little reminder about the weakness of digital memory and a lesson I should get things backed up. It has definitely also provided the impetus to keep printing and preserving my archive. 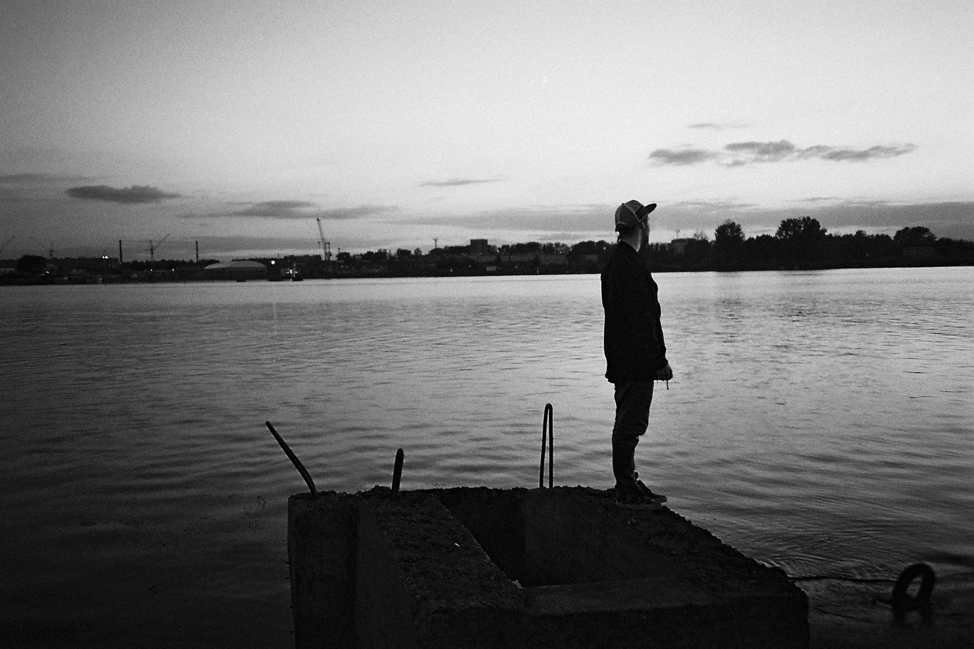 How do you go about creating each issue and how do you chose the stories and artwork?
Issue #1 is was just a matter of collating a bunch of images that only existed online and creating an output for otherwise unseen images. Now I’ve got the ball rolling, I aim to keep them coming. It would be nice to bring out a fresh issue every few months in a similar vein featuring trips alongside heavier riding shots. Next time with the addition of more text, more graphics and more collaboration. #1 was printed black and white on a low budget, but as long as there is a demand I hope to slowly ramp up the quality for each issue. 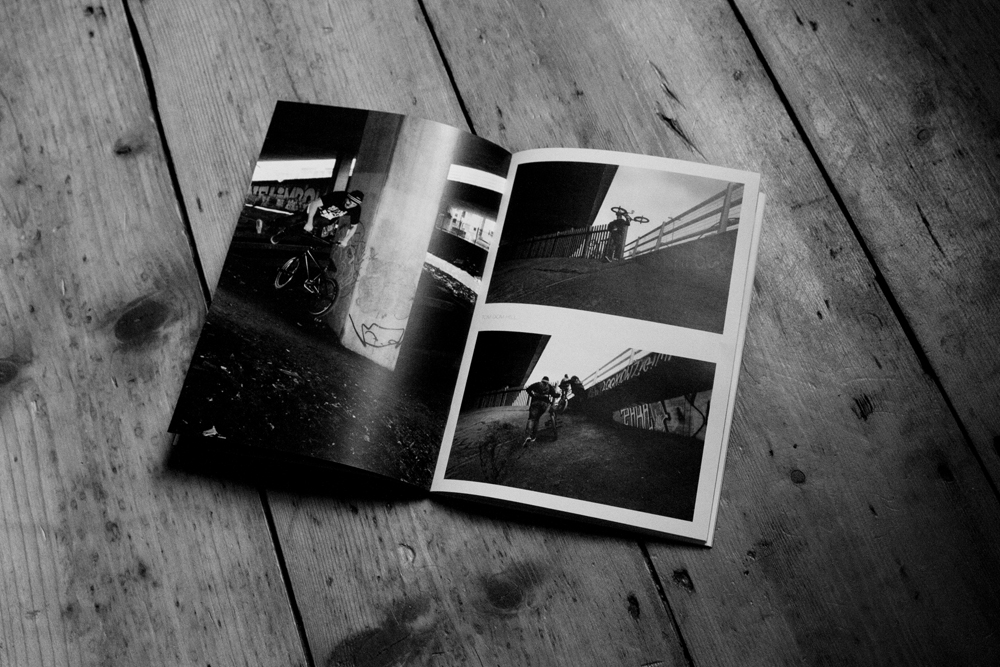 When and why did you start making zines?
In 2005 I started studying photography; the old fashion way. Print was just part of the process. I guess from there the aspiration was always to shoot for the magazines. In my first few years of college there was a big hype for web-zines; I dabbled with Geocities and the web thing when it all seemed new but there has always been that pull of printed matter.

In 2010 I eventually made it up to uni in Bristol and zines/DIY projects were a good outlet to escape the regular photography syllabus. I eventually ended up getting back on the internet and making a little (now defunct) website, OneGiantArm.com or ‘OGA’, with my pal Tommy Sussex. 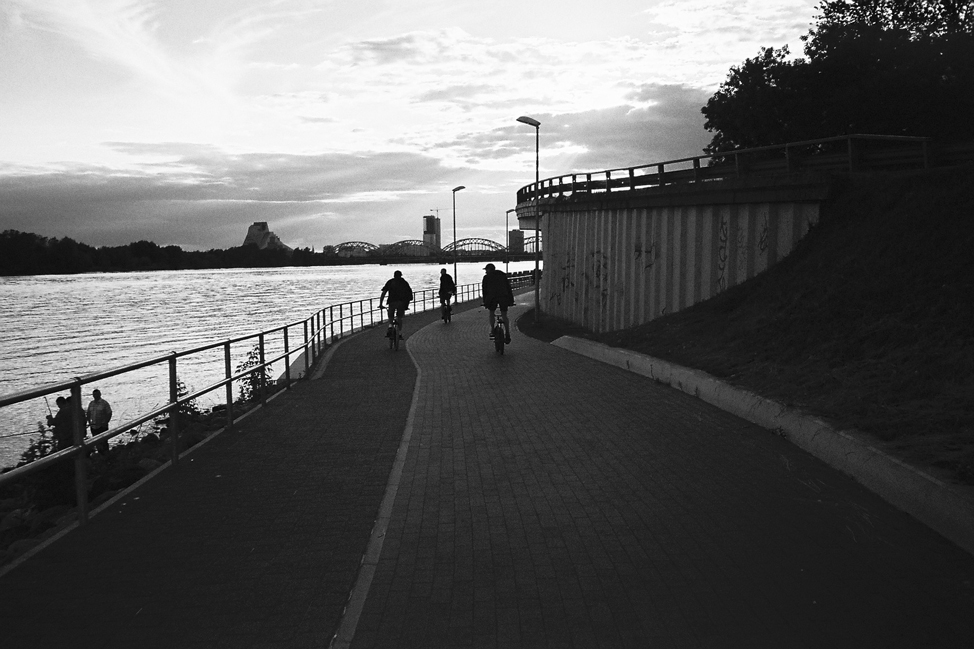 We used the site to publish our own work alongside anyone else that wanted to get involved. I guess we got it all rolling at the right time and things snowballed; we ended up featuring hundreds of photographers work and amassed a pretty vast archive of zines and self-published projects.

Around 2014, after producing a handful of zines through ‘OGA’ our dedication to the site slowly dwindled. Nonetheless, zines and self publishing have remained part of our photographic process. There’s nothing better than wrapping up a collection of images within a physical piece. 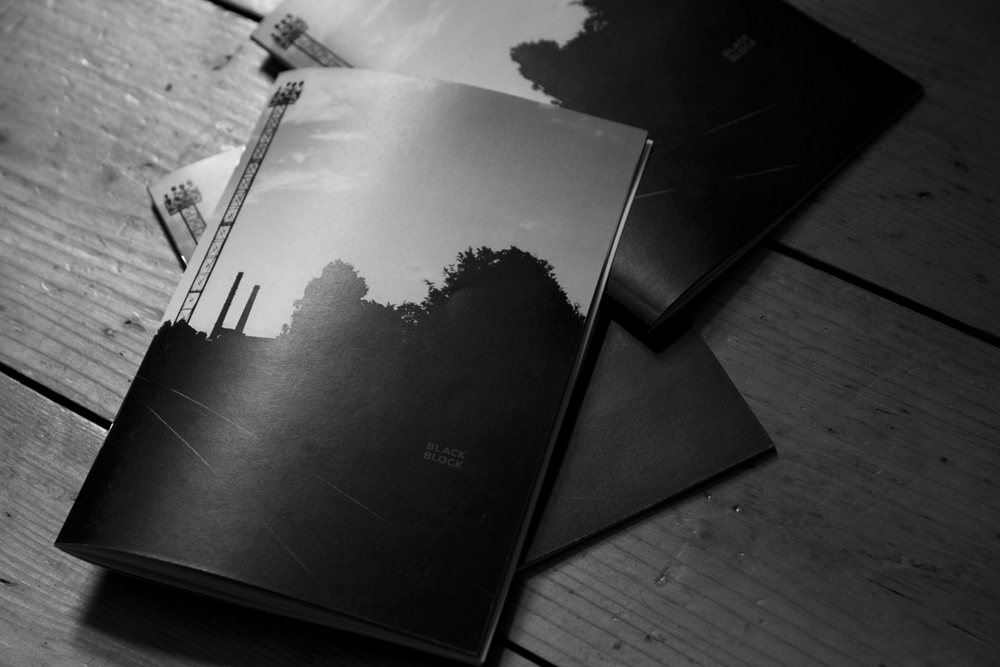 What do you like about the medium?
The exciting thing about zines is how accessible they are. In their most basic form you can produce something with a few sheets of paper, images and a bit of string but somehow it becomes a common language that people can understand and share. This all seems particularly important with the rise of the internet/Instagram and the slow demise of magazines.

I also struggle to share my own work online. There’s something about the vertical/horizontal one-size feeds that bugs me. Through print, it’s much easier to prescribe the rhythm of the images and prioritise certain images through the layout. The viewing experience on the whole is much more enjoyable and nothing beats the tactility of leafing through fresh pages. 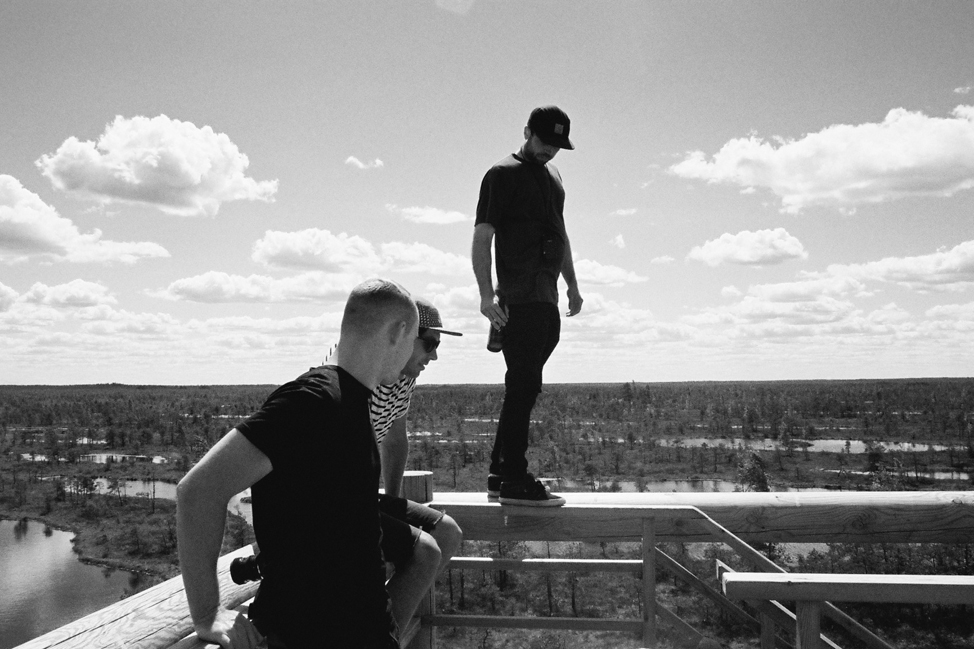 What do you do for a living and how does zinemaking fit into your life?
I spent the last few years in Bristol building bespoke bike sheds but since moving to Exeter I’ve been bouncing around a few odd jobs and spending as much time as possible riding my bike and taking photos.

Right now, it’s been the first time since graduating in 2012 that I have actually been able to get things done and tick a few things off the list. I spent some of the wetter days this winter building a primitive large format camera. Obviously, at some point something’s got to give, but for now, making zines and getting out with the camera has just been another daily activity. 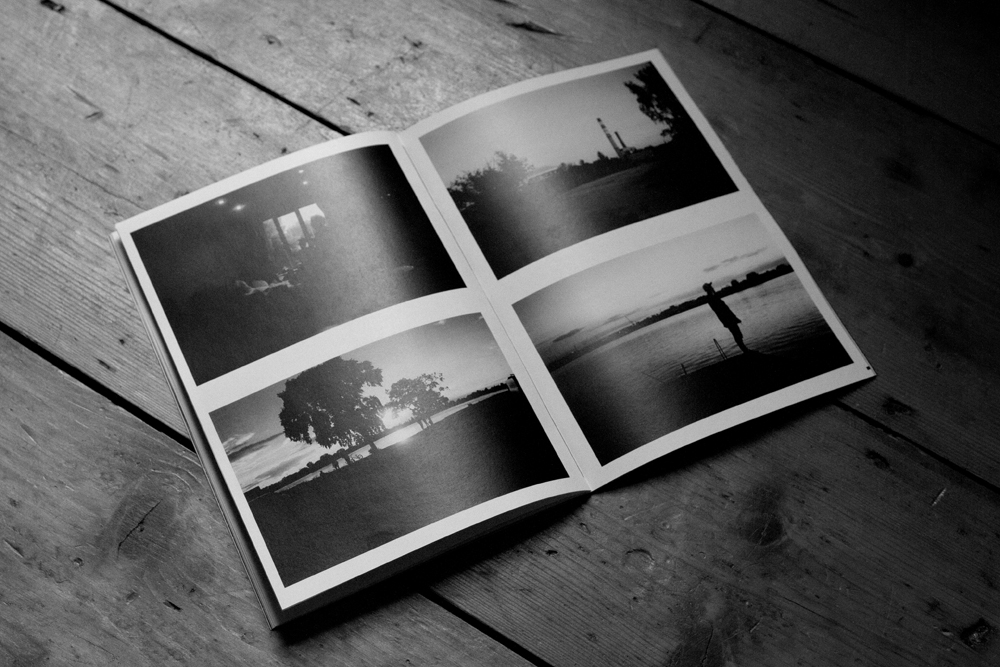 Have you swapped BlackBlock for any other good zines?
So far, not so many swaps. I got a little something going on with Mason Gray over at Badv3ntures but I’ve mainly been selling online.

I’m always down for a swap, so if anyone is interested give me a shout! If you know me, I’ve got a handful left and I’ll happily accept beer.

What are your favourite zines?
It’s hard to keep up nowadays but it’s been good to see a few more zines hitting the BMX scene. There are so many people pushing self-publishing at the moment theres something for everyone. Back in the ‘OGA’ heydays, prolific zinemaker Sergej Vutuc stayed on our Sofa, he smashes it!

Favorite zines is a hard one to answer, but anyone that is out there and doing it themselves is good in my book…

Find out more about Joe Williams’ work and get your hands on a copy of BlackBlock Issue #1.

Linkedin
RELATED ARTICLES
OTHER ARTICLES
Theo McInnes’s photos of the annual event provide an intriguing snapshot of contemporary Britain.
A new podcast is opening up the conversation between trans women and trans amorous men in the hope of building coalitions.
Filmmaker Laura Poitras discusses her new documentary which traces the remarkable life of the artist-activist and the impact of her battle against the US opioid crisis.
After building his reputation covering the US civil rights movement in the 1960s, the photographer went on to produce some of the most enduring images of the past century.
Photographer Becky Tyrell went down to the fading banger and stock raceway to meet a community desperate to keep it alive.
A recent High Court ruling against the right to wild camp in Dartmoor National Park sparked the largest land protest in history – and campaigners say their fight is not over yet.