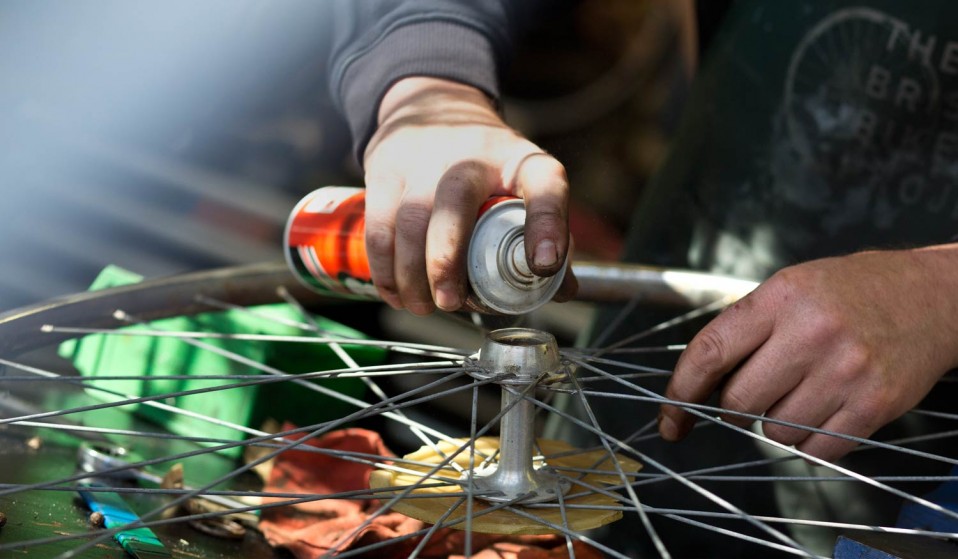 A non-profit mechanic’s workshop in Bristol is giving refugees and other marginalised people the freedom to get around their city, in our latest story from The Commuter Journal – a cycling paper made by Huck and Levi’s® Commuter™.

A non-profit mechanic’s workshop in Bristol is giving refugees and other marginalised people the freedom to get around their city, in our latest story from The Commuter Journal – a cycling paper made by Huck and Levi’s® Commuter™.

Back in 2008, friends and Bristol Refugee Rights volunteers James Lucas and Colin Fan noticed a need for disadvantaged and marginalised people to be independently mobile within the city. Usually forced to live miles away from important appointments, the city’s ever-increasing bus prices meant many of these refugees had to walk for hours every day with heavy bags to better improve their chances of finding work and a stable home; Lucas and Fan saw cycling as the saviour. 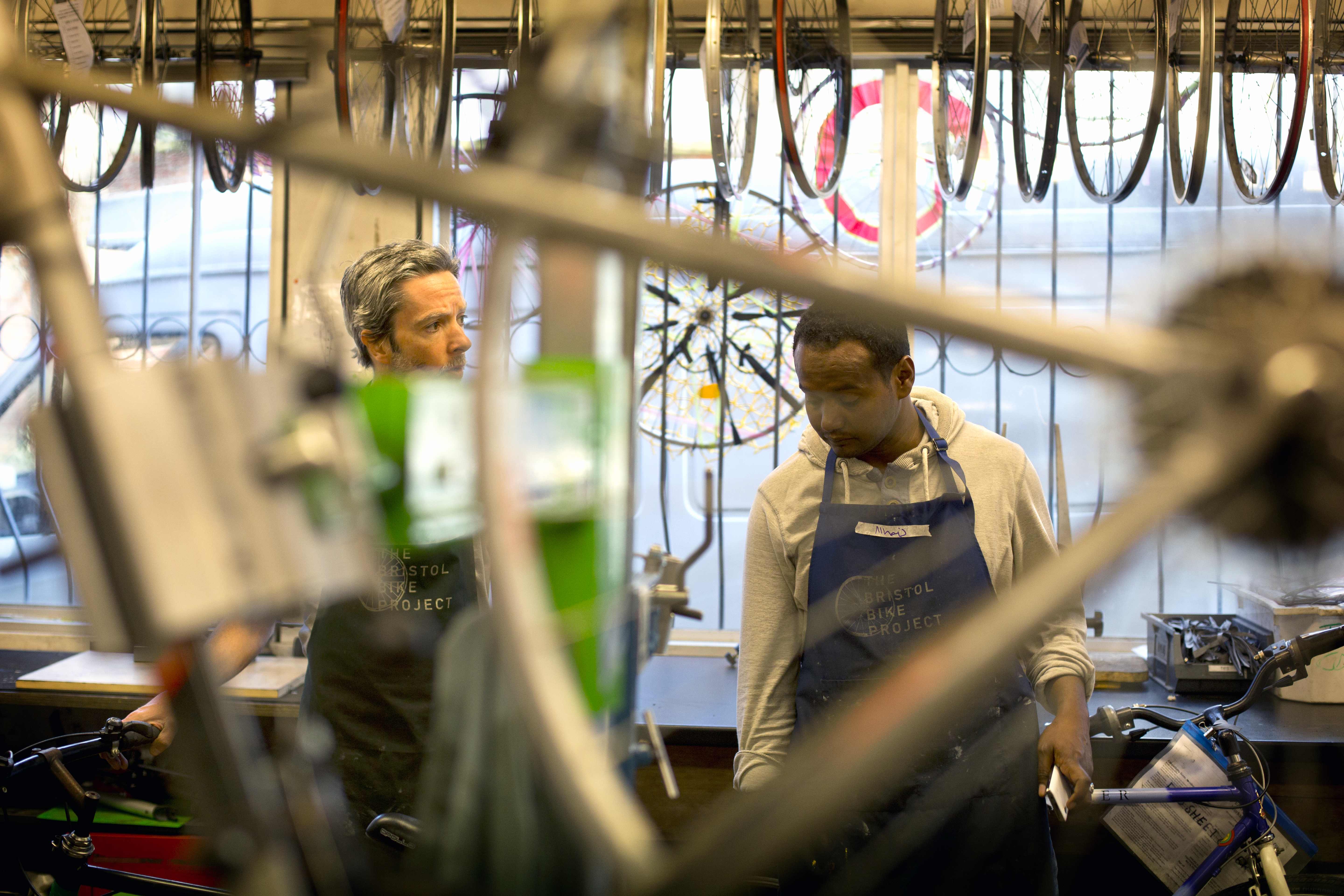 Putting up posters around the city, the pair called for donated bikes and much to their surprise, they quickly outgrew their simple workshop due to the overwhelming response. Now based in Hamilton House in the Stokes Croft area, the workshop has dramatically changed from its humble beginnings. “It’s gone from being a bunch of bikes in James’ front room into a really big workshop with a shop, so that we’re self-sustainable and somewhat self-funded,” explains co-director Pi Manson, who has been working at the Bristol Bike Project since 2011, when he moved from Glasgow and started volunteering. “In that time, we’ve given out hundreds and hundreds of bikes to people in the local area who couldn’t otherwise afford to get around at all,” he continues. 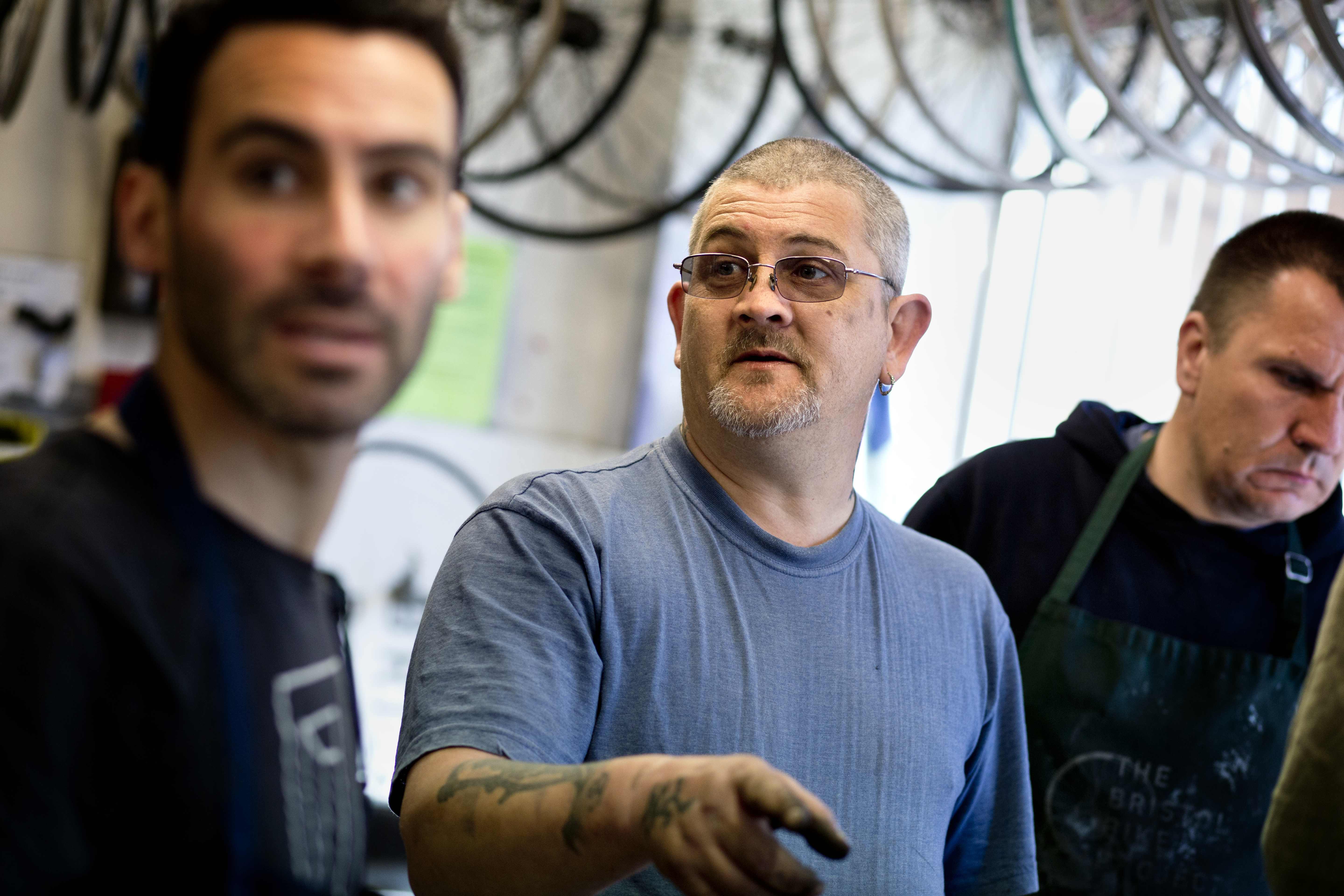 With workshops ranging from the ‘Earn-a-Bike Scheme’ which sees the team give a three-hour, one-to-one service, teaching individuals basic mechanic skills, to their ‘Women’s Nights’ which attempt to break the male-dominated demographics which are so often associated with bicycle mechanics. And also the ‘Young People’s Bike Programme’, ‘Open Repair Days’ and workshop sessions for supported volunteers. “We’re a members co-operative, so anyone can become a member who either volunteers or is in any other way affiliated with the bike project,” enthuses Manson. “We have a sort of horizontal structure – there’s no leaders and everyone can make decisions about how we use the space and what sort of activities we do and what we spend our money on.” 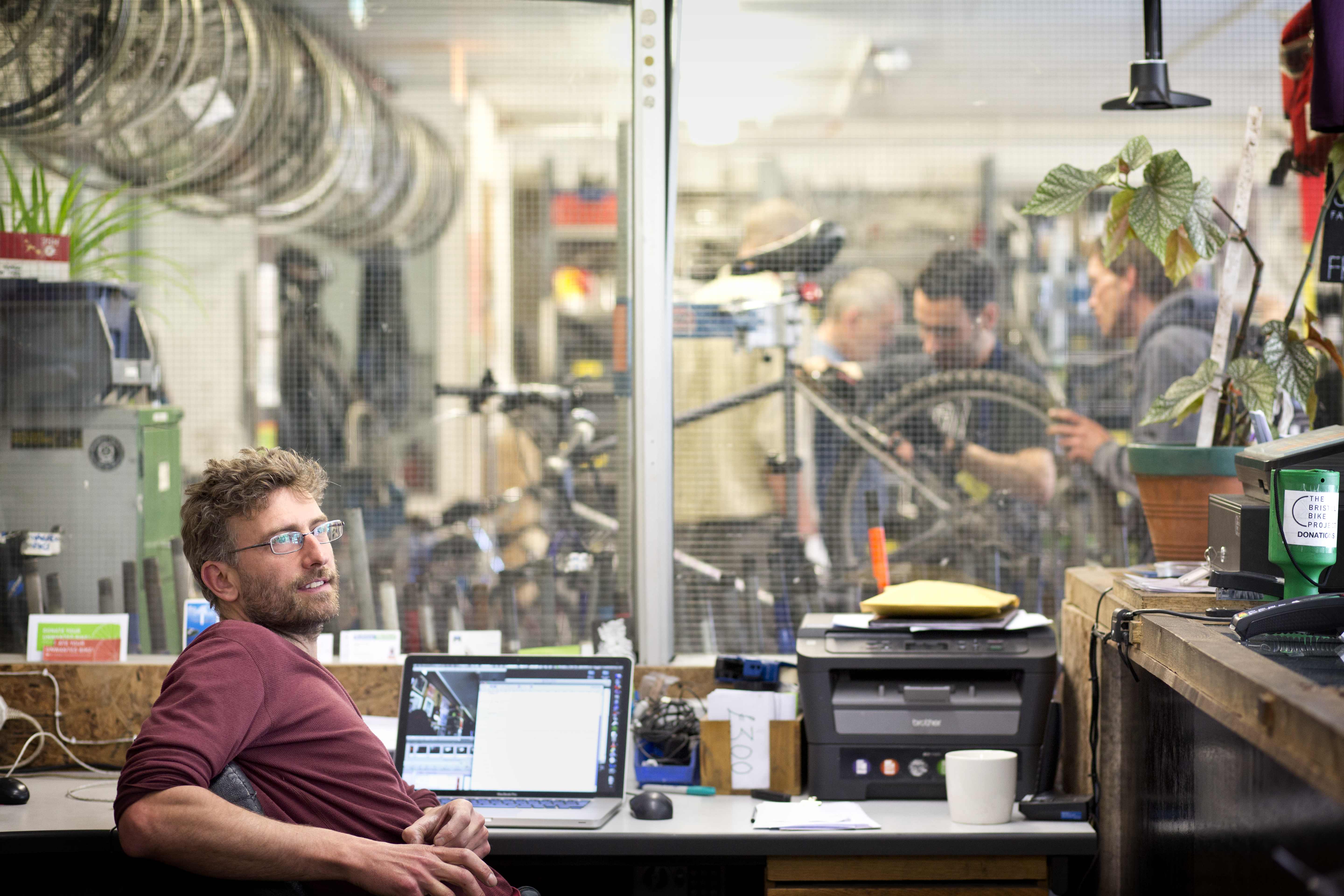 Open six days a week, the workshop’s employees and volunteers are quick to welcome in any one in need of transport. “I met a guy who used to be a car mechanic in Damascus before coming over to the UK,” Manson remembers. “It’s wonderful process to give your time to work one-to-one with somebody who then goes away on a bike and they can then know how to fix it and can come in any time. The kettles always on, y’know, for people to pop in and have a chat.” 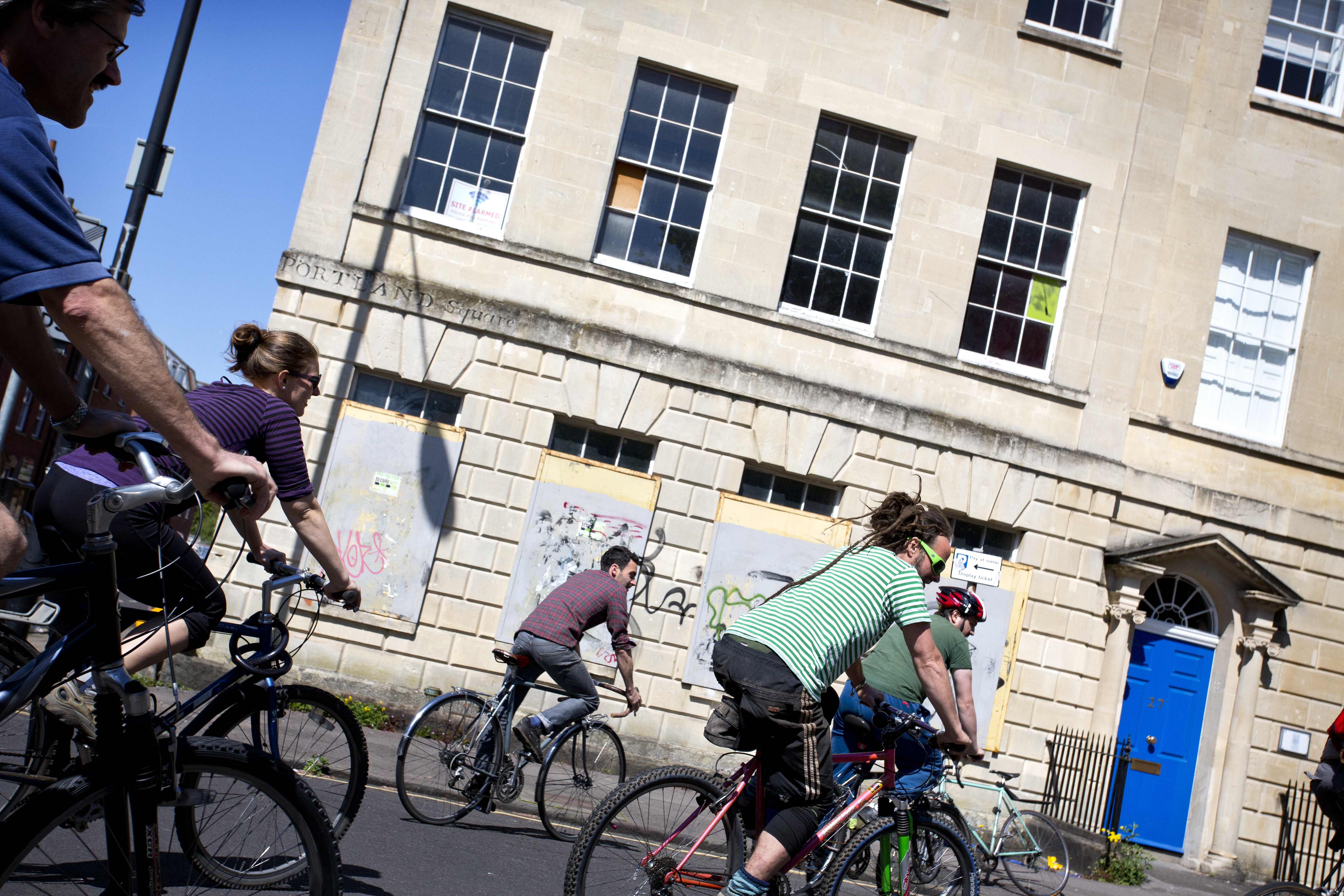 As successful as the Bristol Bike Project has become, it’s another reminder of the transformative benefits of cycling within the city. “I’ve seen firsthand how somebody who doesn’t have any transport – who can’t get around – how getting a bike has changed their life for the better. I know that that makes a real difference to their quality of life,” Manson continues. “On a personal level, I’ve been able to tap into the community that’s built around cycling in the city, meet friends and bag myself a job. I’ve been able to build a life in this city because of bicycles.”

Linkedin
RELATED ARTICLES
OTHER ARTICLES
How the sounds of nature, air force bases, walking across the country, Windrush and synthesisers have influenced one woman’s journey through music and life.
Photographer Nico Froehlich’s series documents South London’s diverse communities, while also reflecting on their fragility amid rapid gentrification.
Through stills, anecdotes and film criticism, a new book examines the portrayal of women’s destructive emotions, reframing it as a challenge to patriarchal structures.
A campaign seeking to prevent future injustices where there is state involvement is gaining momentum, with Labour recently pledging its support.
Hackney Bumps is a DIY sanctuary in the heart of East London, home to a thriving diverse community of skateboarders – and beyond.
Max Miechowski reflects on documenting land that is being lost to the sea – and the people who live life on the edge.