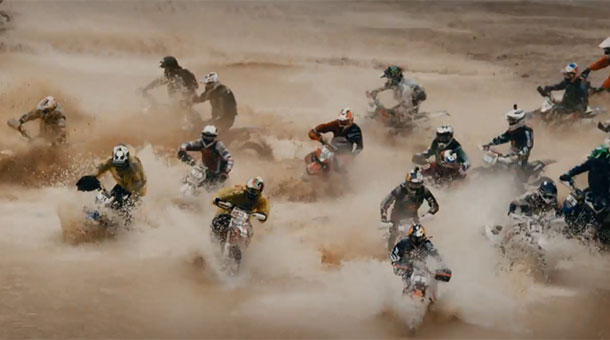 Dana Brown's high-octane sequel to his father's rootsy motorcycle movie On Any Sunday premieres in San Sebastian tomorrow, September 26. But how has bike culture evolved in the interim?

Dana Brown's high-octane sequel to his father's rootsy motorcycle movie On Any Sunday premieres in San Sebastian tomorrow, September 26. But how has bike culture evolved in the interim?

In 1971 Bruce Brown, who in 1965 had directed epoch-making surf film The Endless Summer, released On Any Sunday – a movie that became the foundation myth of motorcycling as purveyor of the freedom principle. Tomorrow, September 26, Brown’s son Dana’s long anticipated sequel to the near mythical moto movie screens as part of the Savage Cinema thread at the San Sebastian Film Festival.

There is a real symmetry to the timing of the release of On Any Sunday: The Next Chapter. Unless you have been living under a rock in a culture-free corner of the planet – you can’t have missed that motorbike culture has not only exploded amongst a new generation – it has taken on many of the aspects of the surf and skate culture that had been so greatly influenced by Bruce Brown’s original tale. The Endless Summer, which featured two young Californians hitting the road to chase the sunny season, pioneered surf spots from Liberia to The Cape and from Queensland to Tahiti and beyond. It set in celluloid surf culture’s romantic idea of itself – and inspired subsequent generations to explore the far reaches of the world in search of empty waves.

Dana Brown’s film, underwritten with a gargantuan budget and all the cutting-edge technology that you would expect from the Red Bull Media House – is far different in tone and feeling from his dad’s magnum opus. On Any Sunday’s languid 16mm texture – shot through with kooky humour, saturated sunsets and gee-whizz Bruce Brown voiceover – is replaced here with what feels akin to a hi-def natural history project whose lens is trained on that strange breed of human that lives to sit astride a bike with an engine.

Like On Any Sunday – the sequel employs a free-flowing, globe-trotting aesthetic that follows the panoply of motorcycle sport – and also, like its progenitor, it is infused with the sort of innocence that characterised both of Bruce Brown’s best known productions. What’s different though – is that Bruce was doing his thing with a rag-tag, dirtbag crew whose love of motorcycling was the primary motivator. You can’t help feeling that the intervention of a big budget and a global drinks brand can only somehow detract from the pioneering feel of the original.

No matter. The world turns. And if the new film turns a fraction of the audience on to the aesthetic beauty of riding a motorcycle, then the film will have been a success.

Find out more by heading to the San Sebastian Film Festival website.

Linkedin
RELATED ARTICLES
OTHER ARTICLES
A new podcast is opening up the conversation between trans women and trans amorous men in the hope of building coalitions.
David 'Dee' Delgado’s photo project is about honouring and uplifting the city of his youth, and a world rapidly disappearing under the relentless onslaught of gentrification.
Yohon Tatum, aka Legendary Father of the House of Tisci, reflects on nurturing a new generation of talent.
The pro skateboarder withdrew from the 2020 Olympic Games so he could come out as trans. Now, he’s hoping to encourage others to live as their authentic selves – within the sport and beyond.
Activists and campaigners are fighting back against new laws that would seriously undermine the ability to take industrial action, calling it an attack on fundamental workers' rights.
Taking us through one of the most dynamic years in recent history, Laylah Amatullah Barrayn new photo book contains tender yet confrontational portraits.