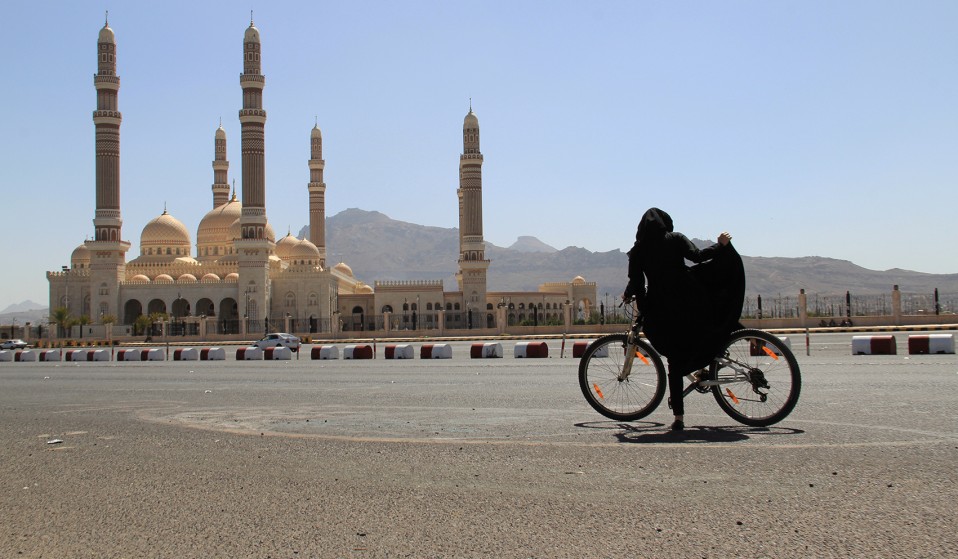 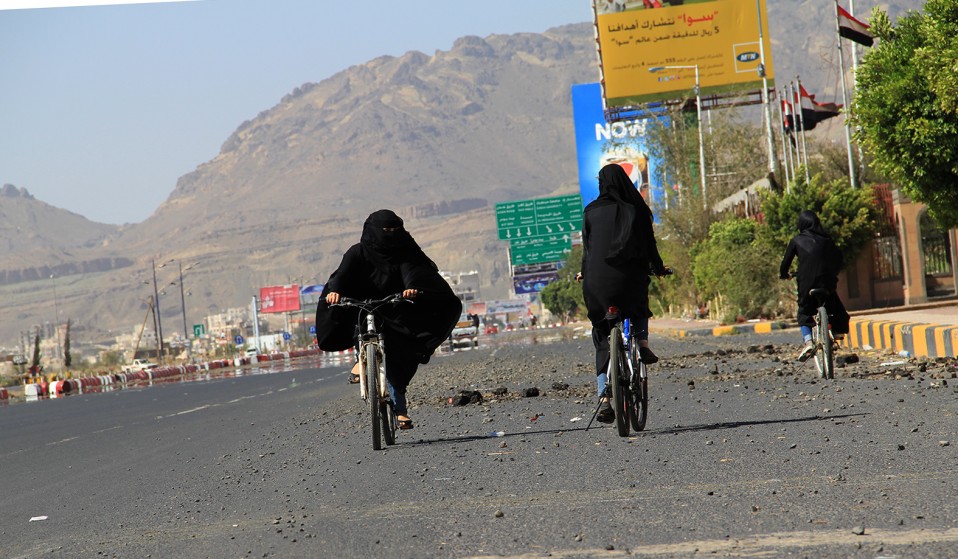 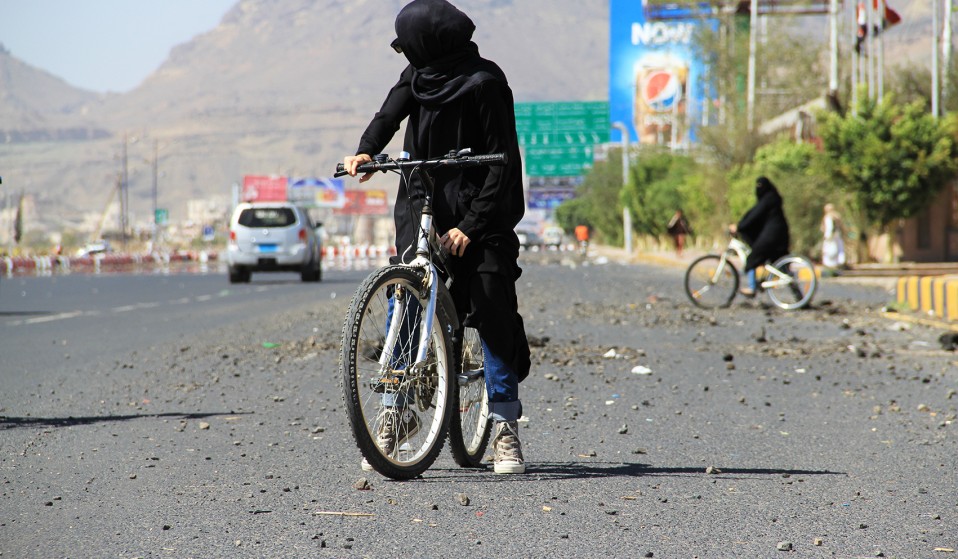 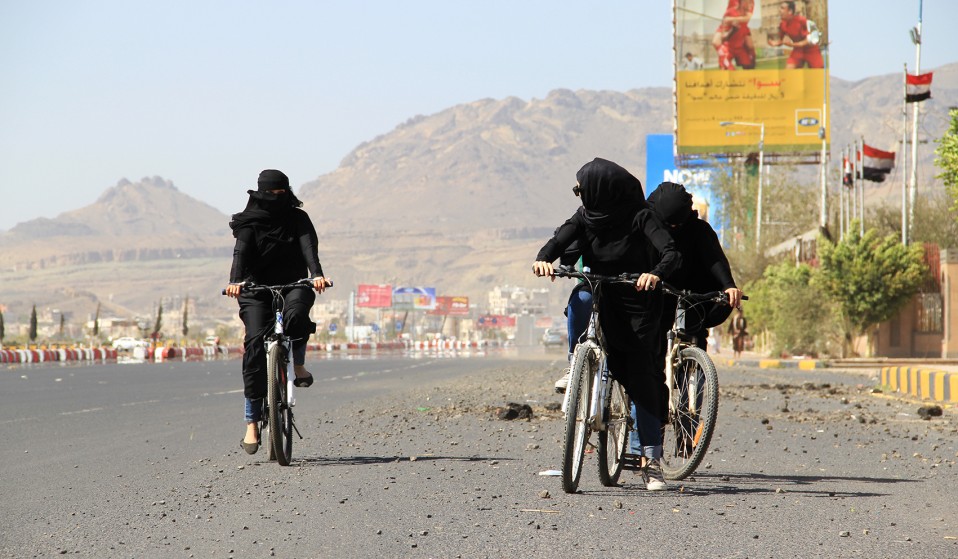 Bushra Al-Fusail is a Yemeni artist and women's rights activist leading a two-wheel revolution in Yemen by challenging gender stereotypes one revolution at a time.

Bushra Al-Fusail is a Yemeni artist and women's rights activist leading a two-wheel revolution in Yemen by challenging gender stereotypes one revolution at a time.

“What did I do? I didn’t go out and strip naked, I just went cycling,” says Yemeni-born photographer and activist Bushra Al-Fusail laughing, while explaining the over-reaction from more conservative elements to her recent women-only cycle ride in Sanaa.

“With the war and the petrol crisis we couldn’t move about easily,” she says. “Men were getting on bikes but women had no alternatives because cycling is not culturally accepted in Yemen. It’s not illegal though, so the idea was very simple. I wanted to show women an alternative way of travelling and at the same time challenge the mentality and beliefs of the men in our culture, show them that we have a right to ride the bike.”

Starting the Yemeni Women Bike Group on Facebook, Bushra’s idea quickly attracted a lot of local interest, mainly she says from women who wanted to show solidarity with her feminist stance. “It was very scary to begin with, we didn’t know what the reaction would be from anyone, but it was very positive, lots of people wanted to show their support.” Using this momentum and encouragement, she then started looking for an opportunity to stage the first ride, which came in the form of a humanitarian ceasefire.

“It was the perfect opportunity, we borrowed bikes and went in the early morning to a main road in Sana’a which was wide and almost empty. There were 14 of us, 10 of whom had never ridden before, and we all started riding up and down the street,” she explains. “It was so much fun, people were stopping to watch us, taking photos and videos, it was great.”

It wasn’t until the later in the day, when she posted pictures on social media, that she realised the impact her ride would have. “When I published the pictures, after just one hour all the local media was talking about it and everybody forgot about the war,” she explains. “People started to message me like crazy, and the phone started ringing. My friends and colleagues were supportive of course, but they were like what the hell on earth did you do, it’s not the time for this because we’re in a war. But I told them it was the opposite, if we want to change the community this is the time.”

Despite the peaceful nature of the ride, the event attracted a lot of negative reactions, mainly from men who were opposed to the idea of women cyclists. “I had comments saying things like, ‘These are not women, these are men dressed as women,’ and, ‘If I ever see you on the bike just believe that I will hit you so bad.’ Despite the attitudes of men here it was shocking for me, I didn’t imagine that there is still people that would think like that. But every time I see these messages I get more stubborn.”

With the campaign gaining a lot of international attention, resulting in solidarity rides taking place in New York, London and Cairo, Bushra said she is already planning further outings.

“We’ve already had a lot more women asking to join us, so it’s definitely going to be a bigger group next time,” she says. “After the second day that I published the pictures there were women that started to bike. I’m so happy with them and now it’s just a matter of how the Yemeni men are going to adapt to this idea. Sooner or later they’re going to see it as something normal.”

Linkedin
RELATED ARTICLES
OTHER ARTICLES
Sideburn Magazine editor Gary Inman on his raucous Dirt Quake event, which descends on Kings Lynn for a weekend of two-wheeled madness at the Adrian Flux arena, July 17-18.
The living wage debate rages on as protestors gathered at the CitySprint courier service headquarters in Shoreditch demand fair pay.
A childhood in ballet, surprise later life decisions and injury have all helped cycle racer Kelli Samuelson push women's cycling to the next level.