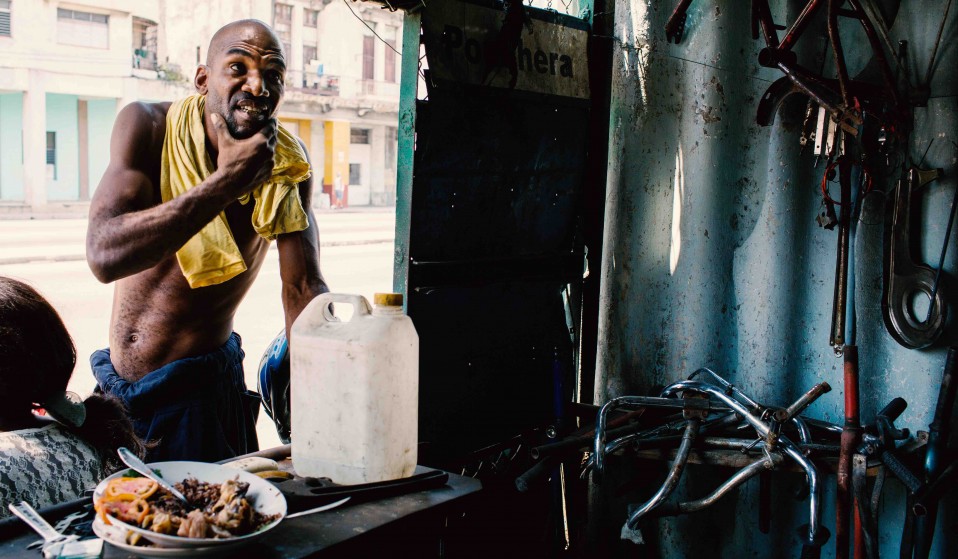 In our first story from The Commuter Journal – a cycling paper made by Huck and Levi’s® Commuter™ – we explore the booming bike revolution in Cuba, a country in the throes of change.

In our first story from The Commuter Journal – a cycling paper made by Huck and Levi’s® Commuter™ – we explore the booming bike revolution in Cuba, a country in the throes of change.

In Central Havana, privacy is an abstract concept. Conversations between neighbors on third-floor balconies take place at full volume, gesticulating aggressively across the gaps between buildings. A few metres below, young shirtless men push produce carts with rusty wheels, advertising tomatoes and onions covered with a day’s worth of city grime. Traffic is held at a casual standstill while kids play soccer and baseball on the potholed tarmac. The smell of diesel, sea air, pork stew, and overflowing garbage bins compete for real estate in the humid atmosphere.

In a world where so much is visible, hiding in plain sight becomes easy. Ernesto Peña is one of the few bike mechanics who still work in Central Havana, practicing his trade from whatever small space he can eek out. For the past few years, he’s been working from his living room and the narrow walkway that leads to his front door – with no advertising and no sign out front. “People find me by word of mouth,” Ernesto explains. “I’ve been working on these things for twenty years so the clients know me.” He simply can’t afford a bigger workspace, he says. 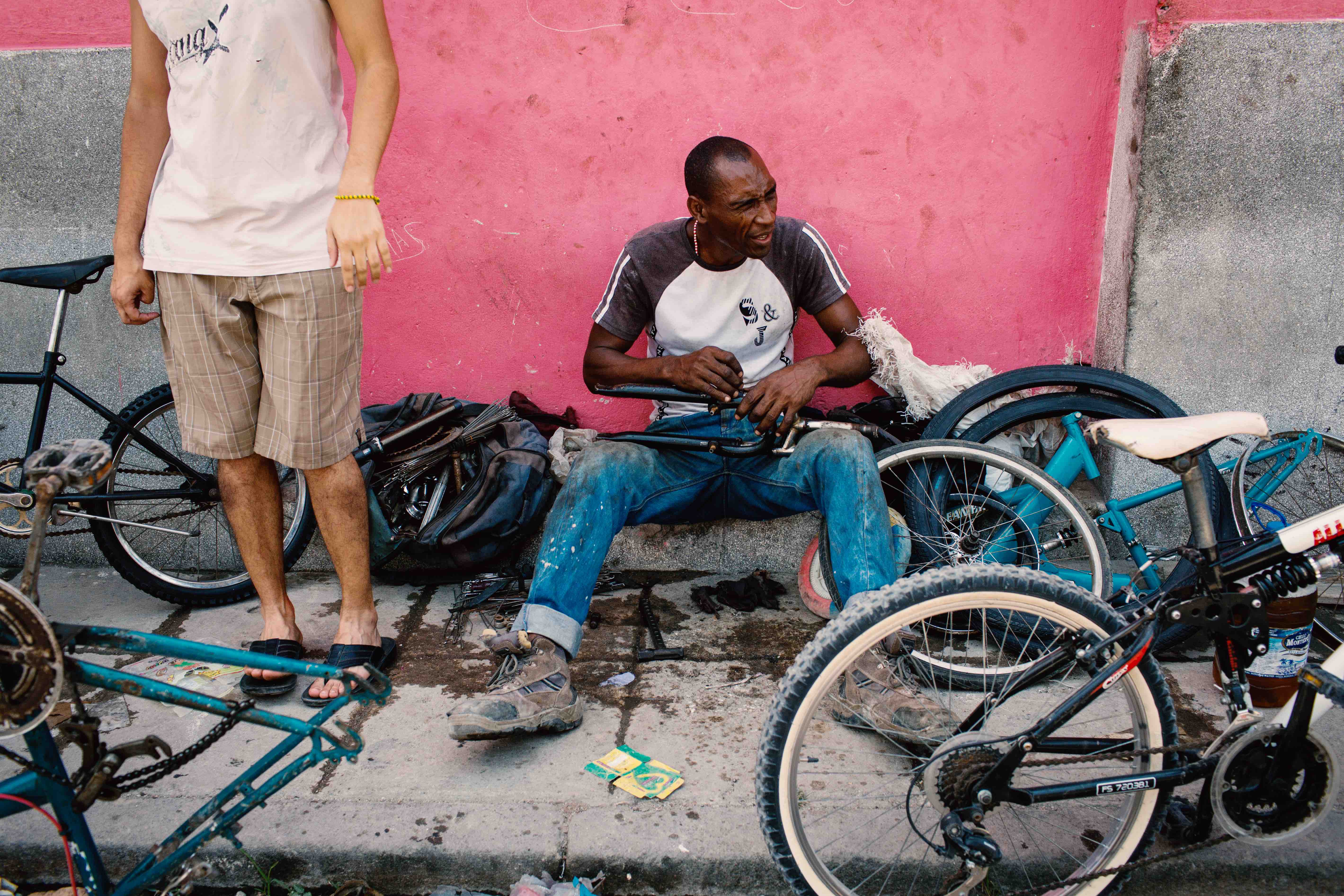 “Every neighborhood used to have several mechanics’ workshops,” Ernesto explains. “Everyone who went through the Special Period knows at least something about bikes.” ‘The Special Period’ is the time after the fall of the Soviet Union in 1991, when petroleum and other subsidies dried up, bringing cars and public transport grinding to a stand-still across the island. To keep Cubans moving through years of extreme austerity, the government imported a million Chinese bikes and kicked off an unexpected cycling boom.

It was easy being a cyclist in Havana during the early 1990s: centralized planning meant bike lanes, spare parts shops, guarded parking and neighborhood mechanics were ubiquitous. Soon lawyers, doctors, and even central government workers were fixing flats, straightening wheels and replacing spokes with their neighborhood mechanic. The state-owned bicycle workshops specialized in beastly, fifty-plus pound imported commuter bikes such as the Phoenix, Flying Pigeon, and the Forever. The Cubans even started manufacturing their own bikes at a retooled bus factory. 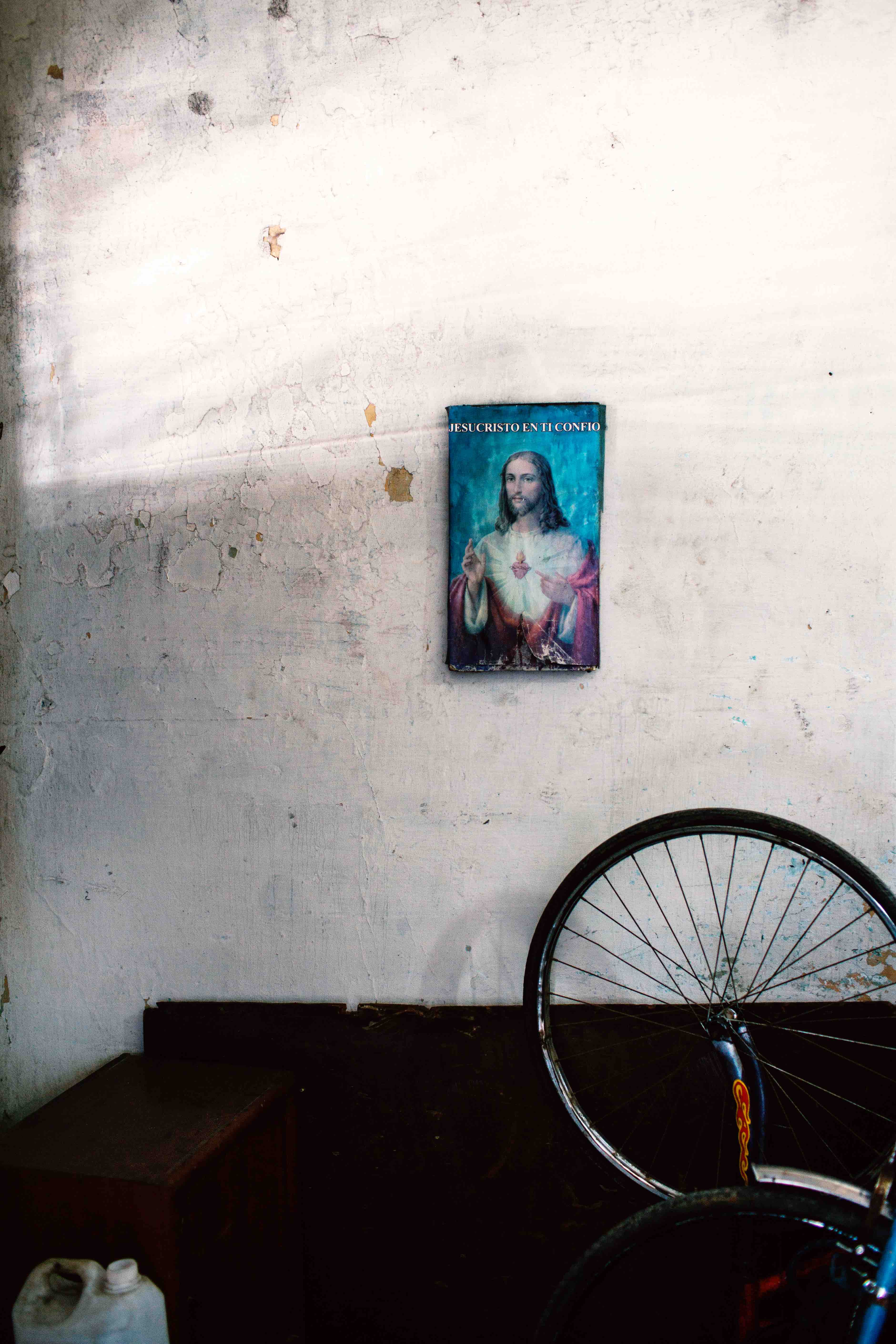 But barely a decade into the bicycle revolution, ships carrying Venezuelan petroleum sailed into Havana harbour, courtesy of late President Hugo Chávez. He offered interest-free loans to help the Cuban economy out of crisis and traded oil for Cuban doctors. Putting the bike at the center of transport policy eventually fell out of favour. “When the workshops were state-owned, we didn’t make enough money as workers,” Ernesto explains. “Then the parts ran out, so eventually they were closed.” Subsidies for cycling dried up and what was once a total necessity became a niche pursuit once again.

When tourists explore Old Havana, they rarely set foot in the four blocks of Calle Cristina between Fernandina and Matadero. The sun-baked ruins, and the people who call them home, are submerged in the sticky humidity of Caribbean poverty. Calle Cristina spurs little intrigue for exploration – unless you’re a cyclist. Here, cruising down the street on a half-decent bike provokes hoots and hollers from sidewalk vendors vying for your attention. They want to know if you are buying, selling, or trading. Calle Cristina is the epicentre of economic activity involving bicycles, and Habaneros will tell you that if your bike gets stolen you can come here to buy it back – one piece at a time. 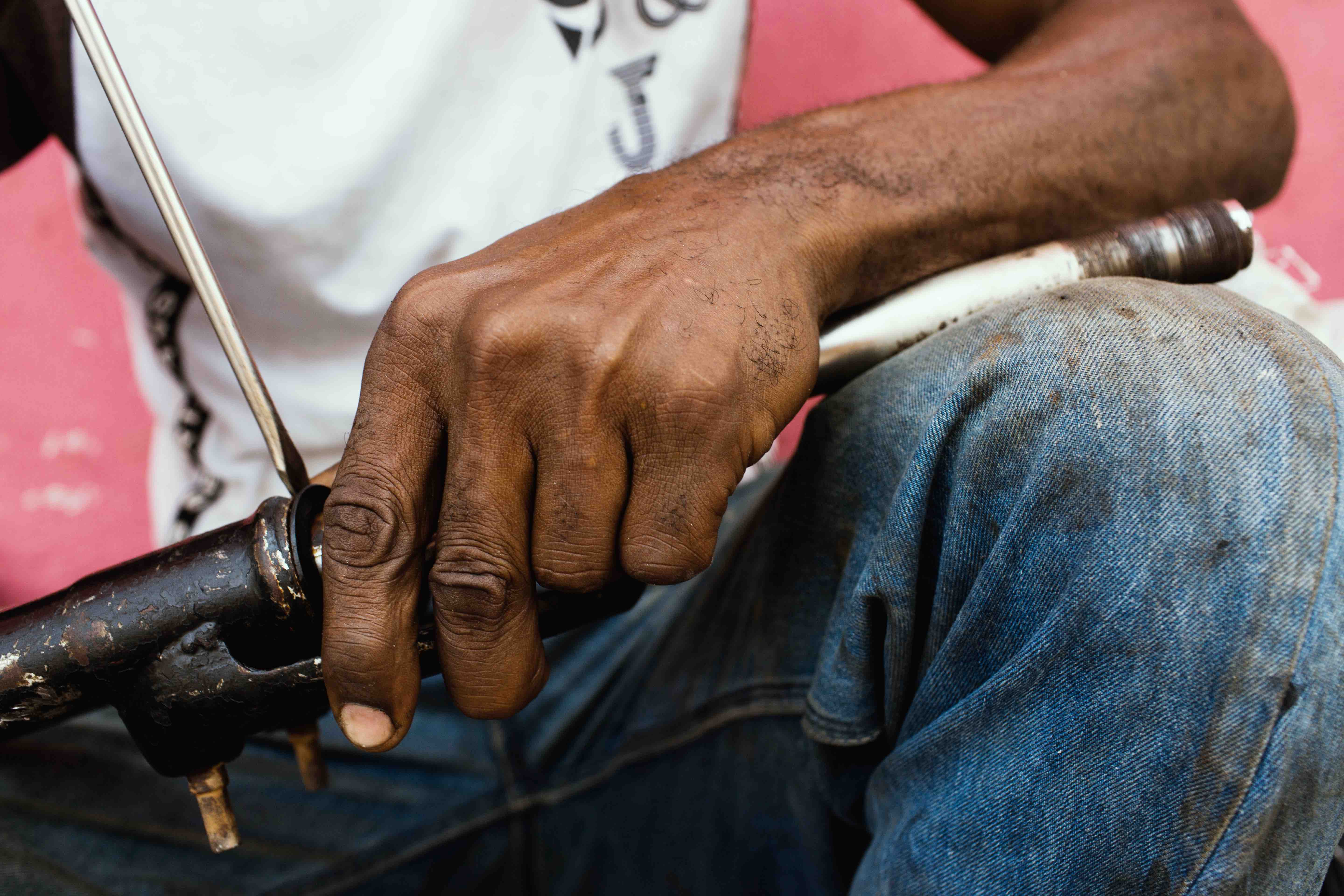 “If you use a bicycle in Havana now it’s because you want to,” Amit Fernandez explains in front of his postage stamp-sized workshop, just a kilometre from where the Chinese bikes were first wheeled out onto the island. Amit’s shop is a sun-seared tin box, with frames and a rag-tag collection of bike parts in varying states of disrepair. Today’s sale item (price: 150 pesos, negotiable) is a lonely, folding travel bike.

The few mechanics who have stuck to their trade carry the responsibility of keeping Havana’s bikes on the road. “If you need a part for a bike and you can’t find it in Cristina then don’t bother looking anywhere else,” Amit affirms. But he isn’t so upbeat these days. “Ever since they changed the customs regulations for bringing in spare parts, I’ve had almost nothing to sell.” People used to come back from Miami, Madrid or Quito with their bags packed full of clothes, electronics, spare parts and other items scarce or absent in state-run shops. But in late 2014, customs regulations changed to limit Cubans to bringing back just one of any item when they returned to the island.

“Choosing to cycle in Cuba still requires desire and dedication, you have to be innovative.”

The once ubiquitous Chinese bicycles have disappeared rapidly from the streets of Havana, mostly bought up by Cubans from the provinces, where public transportation still leaves a lot to be desired. “Most people in the city don’t want to use a bike,” Amit explains. “Besides, we can’t always get spare parts when they break.” Before I leave, he makes one final offer and lowers the price of the folding bike to 125 pesos.

A few kilometres away, in the more cosmopolitan Vedado neighborhood, Nayvis Dìaz has a markedly more upbeat view of her bicycle enterprise. In September 2014, Nayvis opened Taller Vélo (Vélo Workshop) behind the famous Coppelia ice cream parlor. The heart of the hotel district, Vedado is home to green parks with plenty of shade and retains a sense of planned urban development, with its wide streets carrying names like ‘Victor Hugo’ and ‘John Lennon’. 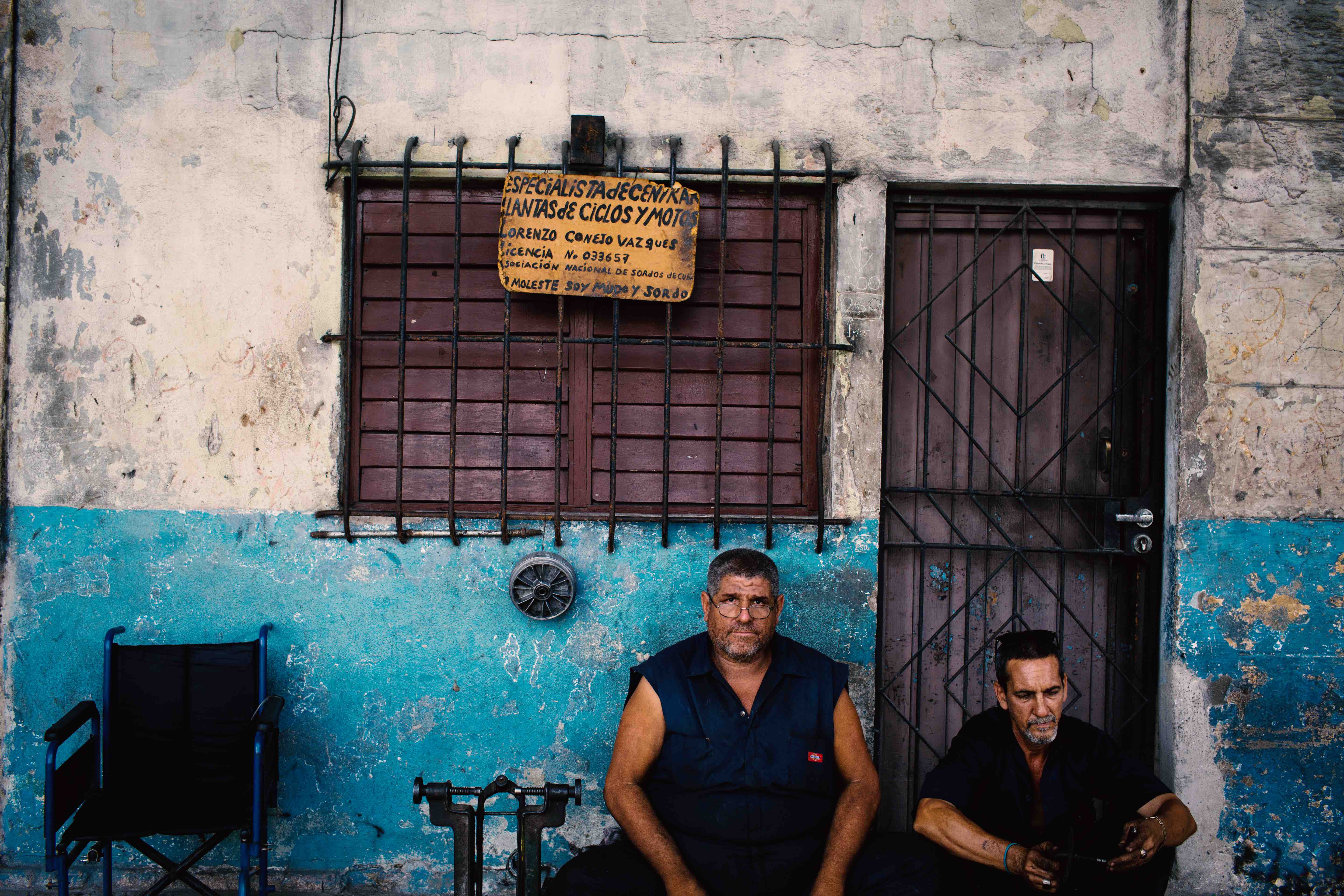 Unlike Ernesto’s crowded shop, Taller Vélo is more spacious, with bike racks and a well-stocked workspace. “I happen to have the best mechanic in Havana,” Nayvis explains, referring to the workshop’s chief mechanic: Daylin Carbó. “After studying the area, we concluded this location was the best because we have access to the local Cuban market as well as the growing tourist industry.”

Taller Vélo captures attention not just because its orderliness stands out in Havana’s chaotic urban jungle, but because both its owner and chief mechanic are women. “People aren’t used to seeing women do this type of work,” Nayvis explains, laughing. “Some are surprised but everyone is supportive. I remind them that both sexes had to learn how to tinker with bikes during the Special Period.” 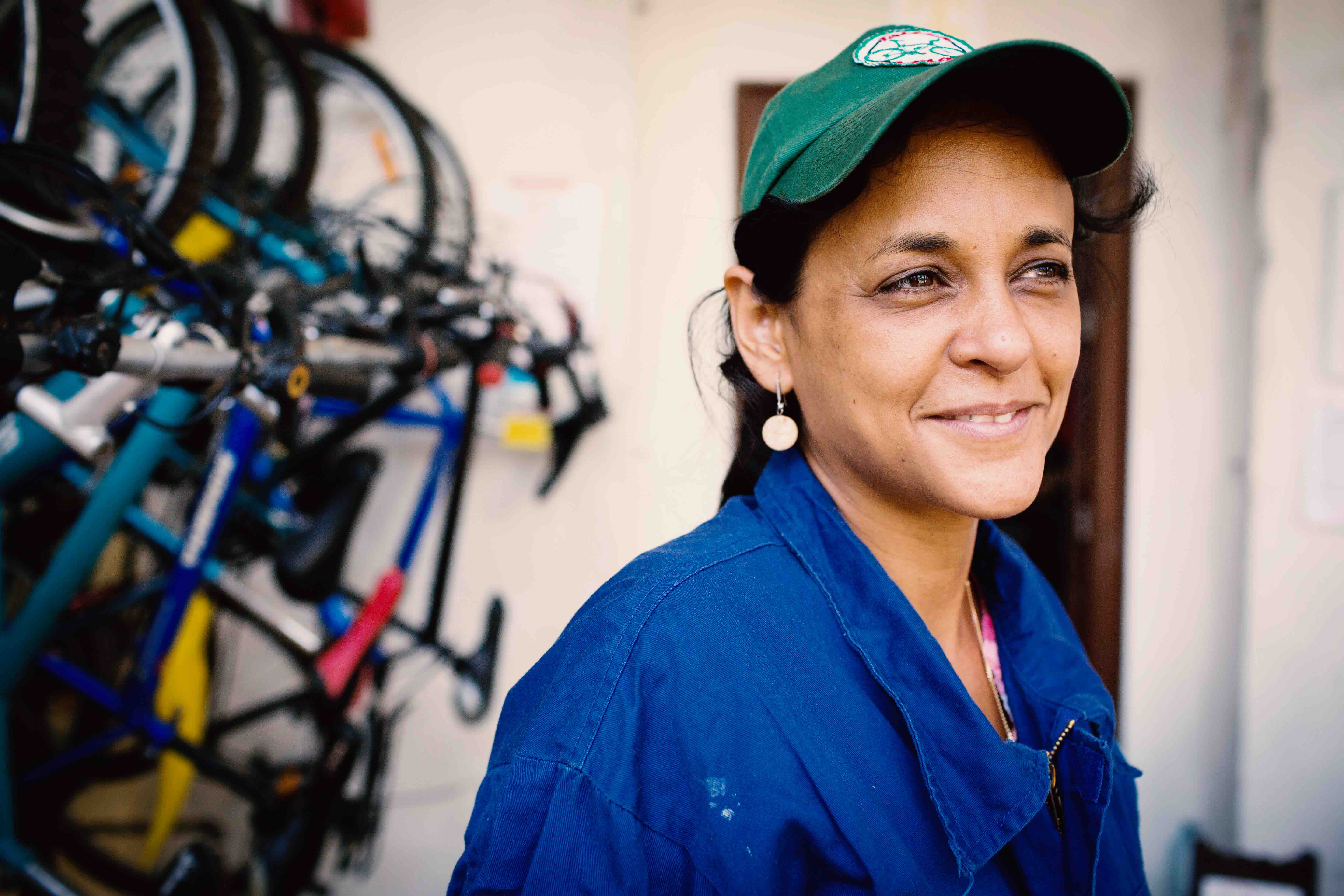 Nayvis has her eyes on the future and is closely watching the evolution of Cuban cycling culture. “Havana residents are still riding bikes, but not the old Chinese commuters,” she explains. “They’re riding new mountain bikes or road bikes so we’re specializing in servicing newer models.” Since 2011, the government has allowed citizens to open privately-owned small businesses such as Taller Vélo. Nayvis is taking full advantage: attracting new customers through advertising, giving out smart business cards (even ambushing cyclists as they ride past on the street to hand them over) and is building a web and social media presence.

Nayvis welcomes the improved relations between Cuba and the United States. The historic December 17, 2014, agreement paved way for growing cooperation and the loosening of restrictions for international banking, trade and travel. Nayvis anticipates growing tourist numbers and has invested accordingly: she has bikes for rent and offers tour packages through a travel agent to allow visitors to explore the island by pedal power. 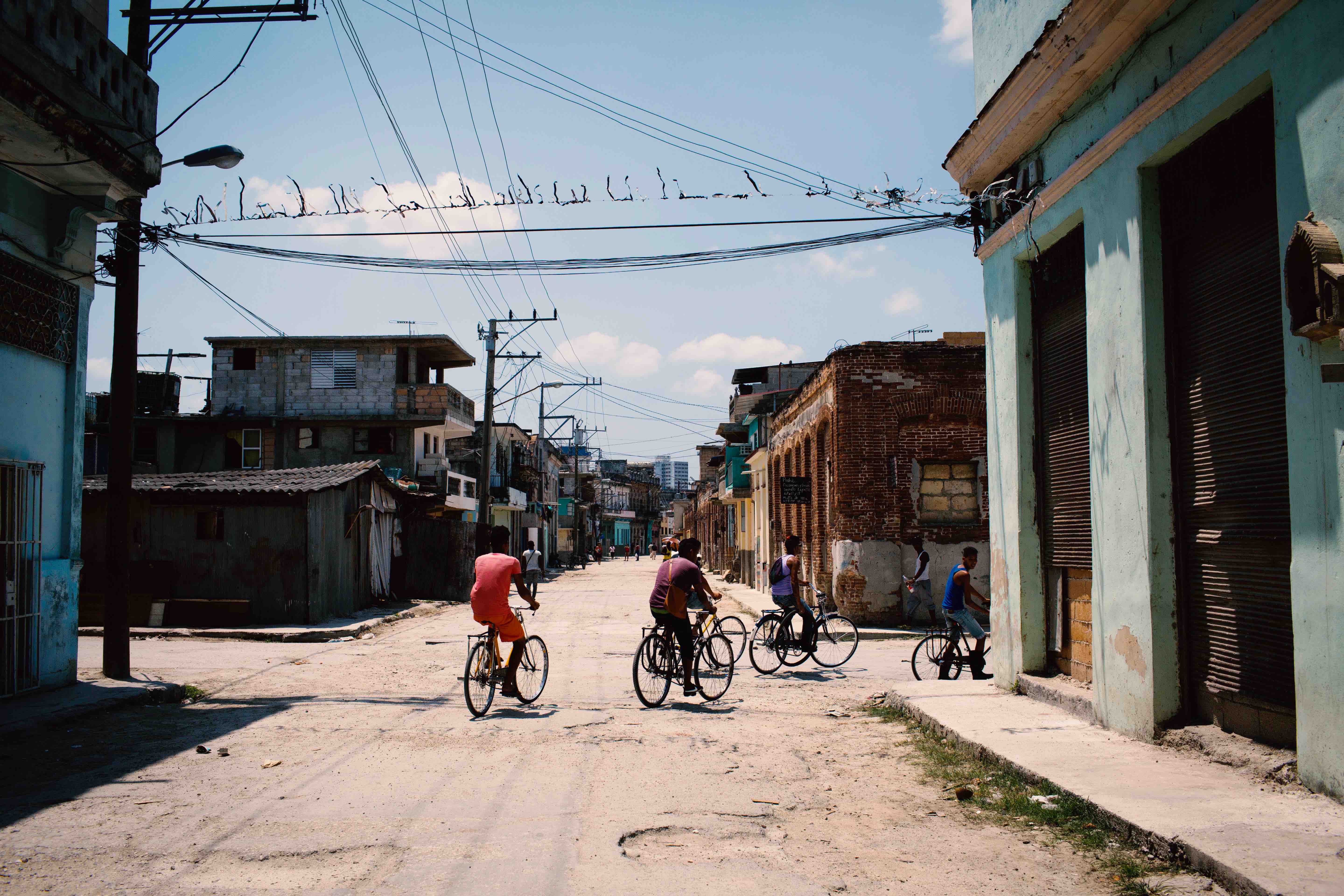 Cuba stands to gain from the détente with the US through an end to the five-decade-long embargo and an expansion of its tourism market. Lifting the economic blockade would make the mechanics’ search for spare parts a whole load easier and the arrival of American sightseers would boost demand for more shops like Taller Vélo. Cuba’s up-and-down love affair with the bicycle looks set to get a new lease of life, but the benefits could take a while to filter through.“ Bicycles were imposed on us as a solution to our transportation crisis, now those of us that continue riding do it out of choice,” Nayvis explains. “Choosing to cycle in Cuba still requires desire and dedication, you have to be innovative.”

Linkedin
RELATED ARTICLES
OTHER ARTICLES
Members of the collective share some of their reasons to run as part of #UnitedBySummits, a campaign that looks to uncover transformative power of the outdoors.
After news broke last week around an expected reversal of the 1973 landmark law that made abortion legal in the US, protestors gathered in the UK in support of American women.
The situation in Afghanistan remains dire, with many groups facing persecution at the hands of the Taliban.
In the latest OFFF Dispatch, the enigmatic designer dives into his process, connecting the dots between his unique and varied creative output.
The author discusses her blistering new novel about history, revolution and queer love.
In the last of our dispatches from OFFF Barcelona, Rufus Deuchler and Vincent Gault discuss the future of creative process.