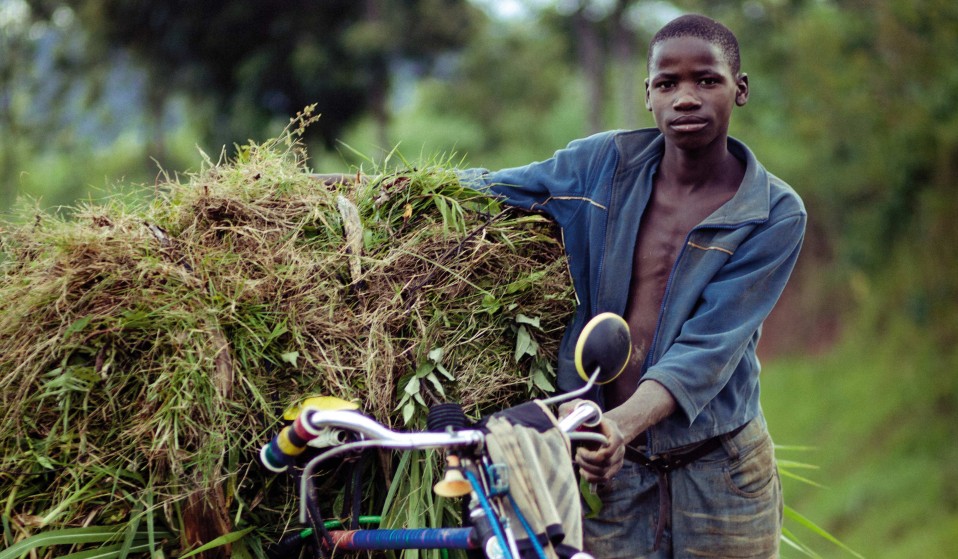 In Rwanda, the land of a thousand hills, the bike is empowering all who ride.

In Rwanda, the land of a thousand hills, the bike is empowering all who ride.

In a country where just two in every thousand own a motorised vehicle, the bicycle is a coveted object for the denizens of Rwanda. If people haven’t got enough money to buy one, they’ll pay to take a ride on someone else’s or set about constructing their own out of bits of old wood and found wheels.

Known as the land of a thousand hills, Rwanda isn’t kind to the cyclist. But take a ride across Rwanda’s verdant, fertile land and you’ll see bicycles being used to transport mountainous sacks of potatoes, mounds of cassava leaves so large they mask the rider completely, gallons of water in yellow plastic containers, stacks of charcoal or coffee and, of course, people perched on seats over the back wheel.

Look closer and, every now and then, you’ll also see a man in lycra zooming by on a state-of-the-art racer. These select professionals make up Team Rwanda, the country’s first national cycling team. As well as training for the Olympics, the team also take part in Rwanda’s own annual tour each November, organised by American five-time Tour de France racer Jonathan ‘Jock’ Boyer.

“For two years it has been an international race, sanctioned by the UCI, the governing body for cycling,” says Boyer. “Each year it has had over three million spectators, and it is now the largest event in Rwandan history. It has become a showpiece for African cycling. It is one of the top events in cycling in Africa right now.”

Trained on the tough Rwandan terrain, the Team Rwanda cyclists are performing well in races across the continent, and this year Adrien Niyonshuti became the first Rwandan mountain biker to qualify for the Olympics. Having lost seven brothers in the 1994 genocide that killed 800,000 people, his performance is proving to the world that Rwanda is pushing ahead towards a brighter future and the bicycle – whether it’s carting coffee or letting a kid freewheel down a dusty hill – is emerging as a symbol of hope. 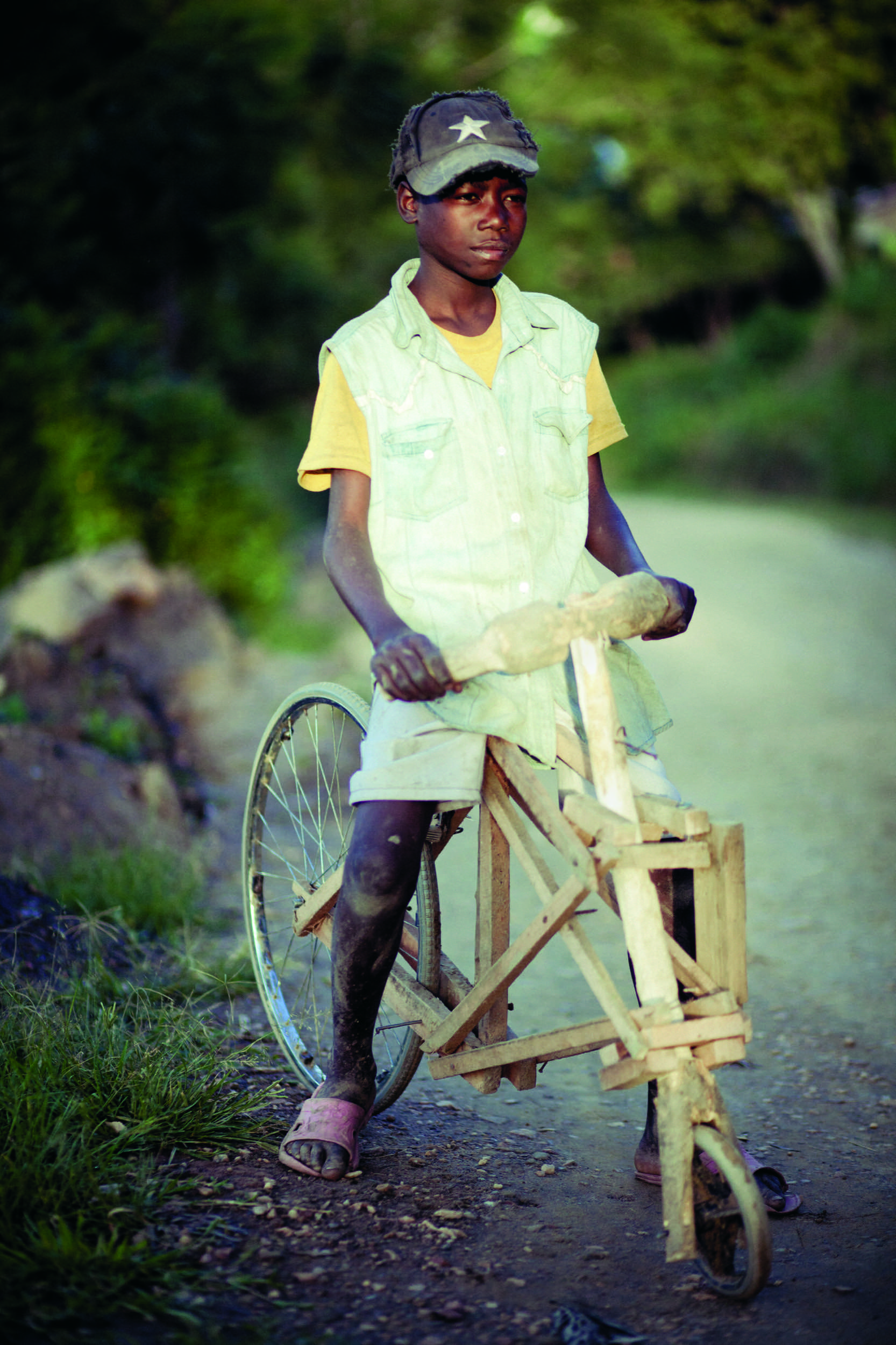 Twelve-year-old Theogen Rukundo made this bike himself just one month ago and he is very proud of it. “My friends always want to have a go,” he says. Until very recently wooden bicycles were the mainstay of the Rwandan rural community and were used to transport heavy loads to market.

But the lack of brakes made them dangerous, particularly downhill, and the government made them illegal for road use a couple of years ago. Now, you will mainly see children like Theogen creating wooden bikes to play on, though they are still used for transport among the tea fields, rice paddies and coffee plantations. 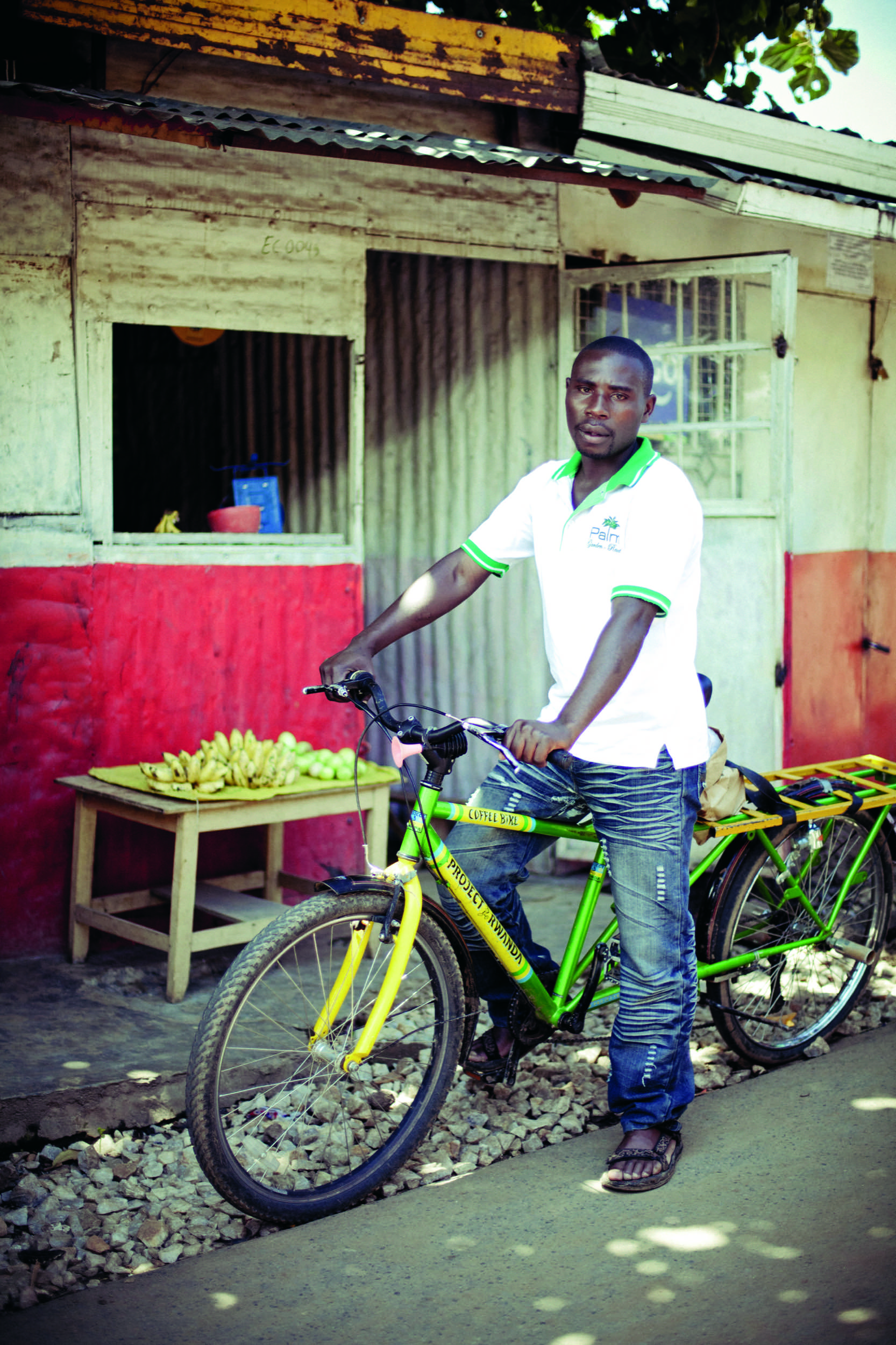 John Bosco Turimumahoro, thirty, has had this coffee bike for six months. He saved up 120,000 francs (about £130) to buy it, because it can carry loads faster than a regular bike, increasing his productivity and income. “Everyone is jealous,” says John. “If everyone could afford one, then I’m sure we would all have them.”

The bikes are designed by Ritchey Design in collaboration with Project Rwanda – a volunteer-driven organisation that oversees the training of Team Rwanda – and were originally intended to help coffee growers carry loads of cherries to the washing station quicker, thereby increasing the quality and price of their coffee. But word has spread, and now Rwandans from all livelihoods covet these bikes for the transport of goods. 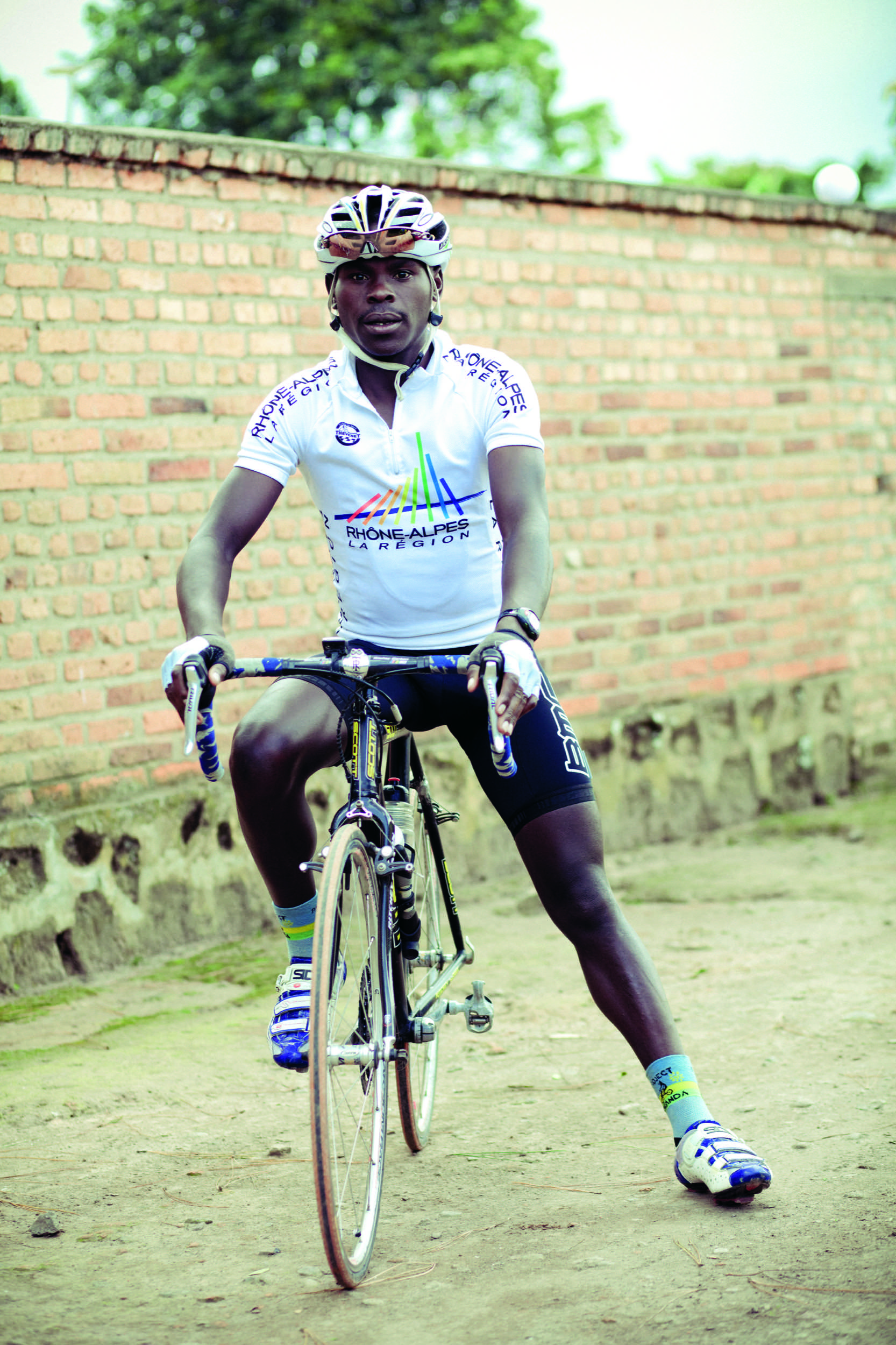 Gasore Hategeka was orphaned during the genocide when he was just seven years old. Without having had a day in school and unable to even write his name, he was eking out an existence working at markets, earning just enough to buy potatoes, until finally he saved up enough money to buy a bike.

Every time he saw a Team Rwanda cyclist go past he would chase them and time himself to see how long he could keep up. Two years ago, Jock Boyer tested him. He did so well, Jock gave him a racing bike that same day, and invited him to train for the team. Now he travels all over the world and was Team Rwanda’s first rider to win an international race when he claimed top spot on the Tour of Cameroon in 2010. 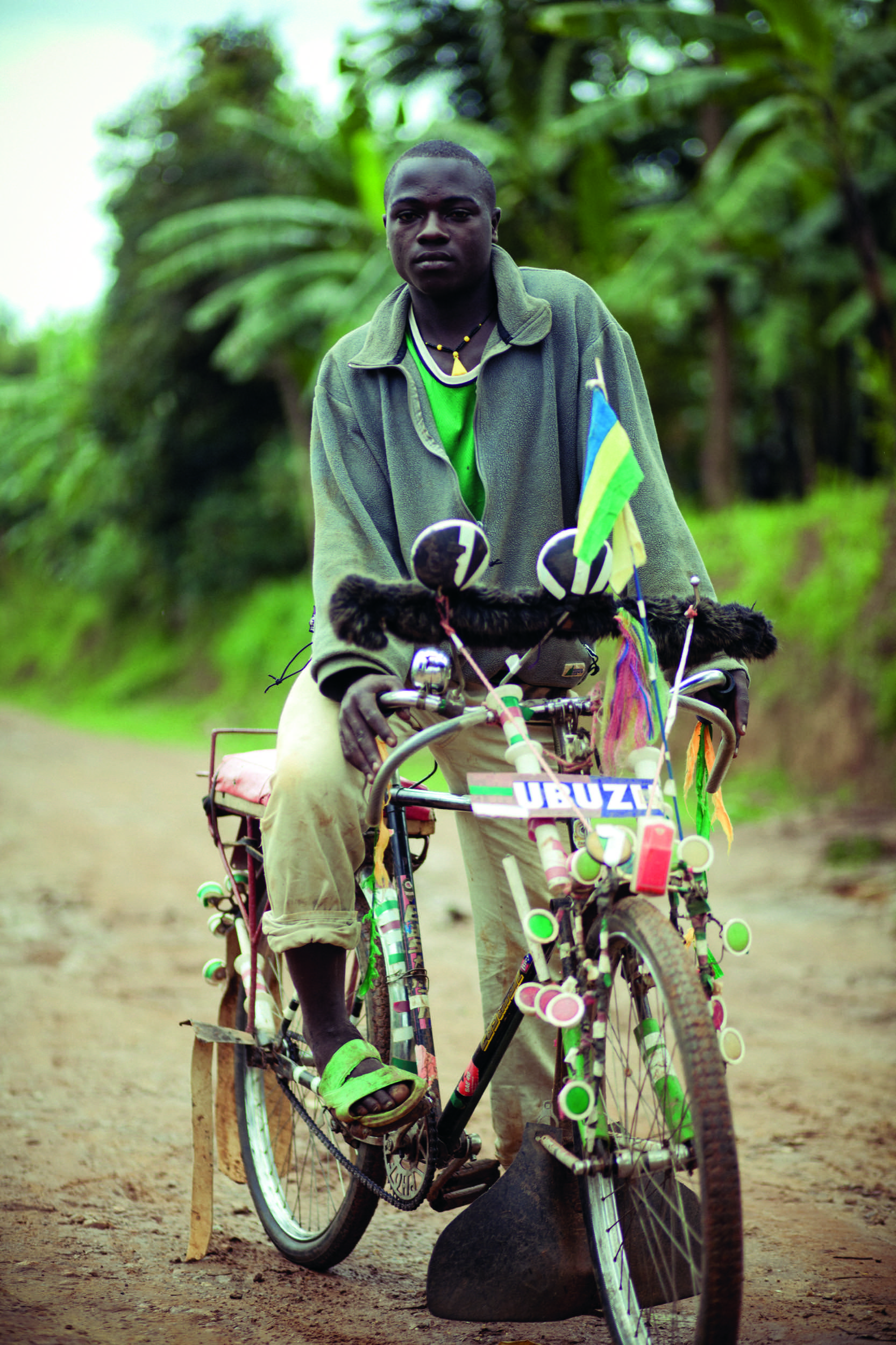 John Minawi was fourteen when he began riding taxis. Now nineteen years old, he has owned his own bicycle for three years. Before that, he was working on a bike that belonged to someone else, and made less money due to rent. On a good day he can earn up to 3,000 francs (£3.20) giving people rides, but on a bad day it can be as little as 500 francs (60p).

He is very proud of his pimped-out wheels and thinks the touches he’s added drive more business. “I think the more stuff I have on the bike makes it feel heavier on the road, which I prefer,” says John. “It also increases the price of the bicycle when I want to sell it on to someone else.” On the front of John’s bike, there is a sign that reads ubuzima – meaning life/health in Kinyarwanda.

This article originally appeared in Huck 26 – The Weezer Issue, from Summer 2011. Subscribe to Huck today to make sure you never miss another issue.

Linkedin
RELATED ARTICLES
OTHER ARTICLES
Author Edward Banches dicusses his new book, which examines the hard rock and metal scenes in five African countries: Botswana, Togo, South Africa, Kenya and Ghana.
Activists and campaigners are fighting back against new laws that would seriously undermine the ability to take industrial action, calling it an attack on fundamental workers' rights.
At his West Bank restaurant, Fadi Kattan established himself as the voice of modern Palestinian cuisine. Now, he’s bringing his innovative, bold flavours to the UK’s capital.
A new film from Berghaus traces the story of Adam Raja, who left behind a turbulent upbringing to discover the healing power of climbing.
After building his reputation covering the US civil rights movement in the 1960s, the photographer went on to produce some of the most enduring images of the past century.
A recent High Court ruling against the right to wild camp in Dartmoor National Park sparked the largest land protest in history – and campaigners say their fight is not over yet.