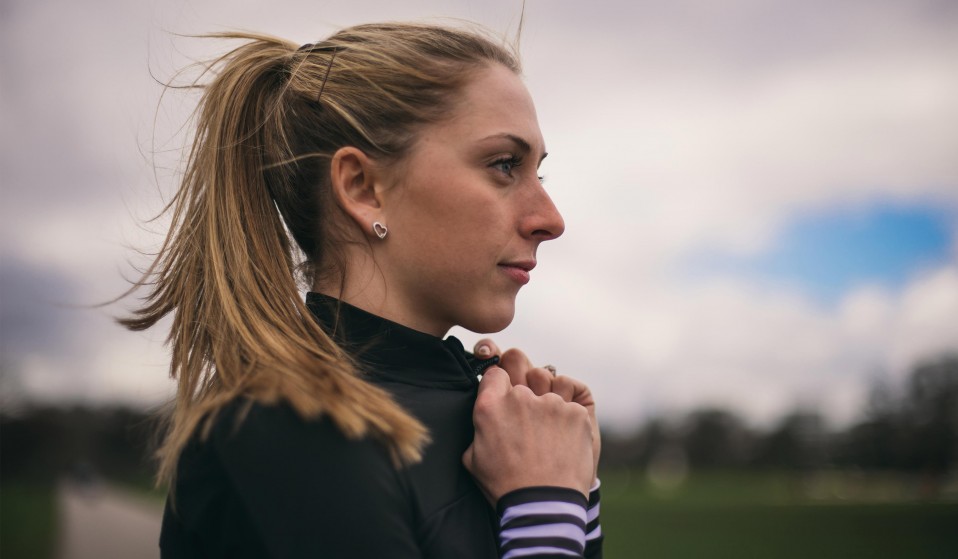 From cycling with her mum to the Olympic podium at London 2012, Laura Trott hasn’t lost sight of what matters most.

From cycling with her mum to the Olympic podium at London 2012, Laura Trott hasn’t lost sight of what matters most. After storming to two gold medals at Sunday’s world championships in London, she’s on course for another medal haul at Rio 2016.

Double Olympic gold medalist Laura Trott’s cycling career didn’t get off to a great start. “I can remember the first day I rode without stabilisers because it’s the day my sister broke her leg,” she says. “My dad and I were on a patch of grass over on the field near home. He was just pushing me off and I’d fall over, then he’d push me off and I’d fall over again. My sister was going down some little dirt track and she just lost control. We heard her scream and she’d broken her leg. That’s how I learned to ride, because my dad had no choice but to keep pushing me along on my handlebars and hope I would eventually get it.”

Laura was born in Essex, a month prematurely with a collapsed lung and asthma. To keep on top of her condition, doctors recommended sport, but it was her mum who encouraged her to take cycling seriously. After being unable to fit in a cable car during a family holiday to America, her mum became determined to lose weight and threw herself into cycling. “She was just obsessed,” Laura remembers. “[After mountain biking], she chose road cycling and then that was it, we took it up. We just did it as a family.”

Laura didn’t have to wait long for her first victory: a handicap race aged eight at Welwyn outdoor track. “I didn’t even have to do a lap, it was something like a quarter of a lap and all of the big guys had to try and catch me, which was never going to happen,” she recalls, grinning. “I remember that feeling. I won 50p as well, which at the time for a little eight-year-old was massive.” Laura was hooked. 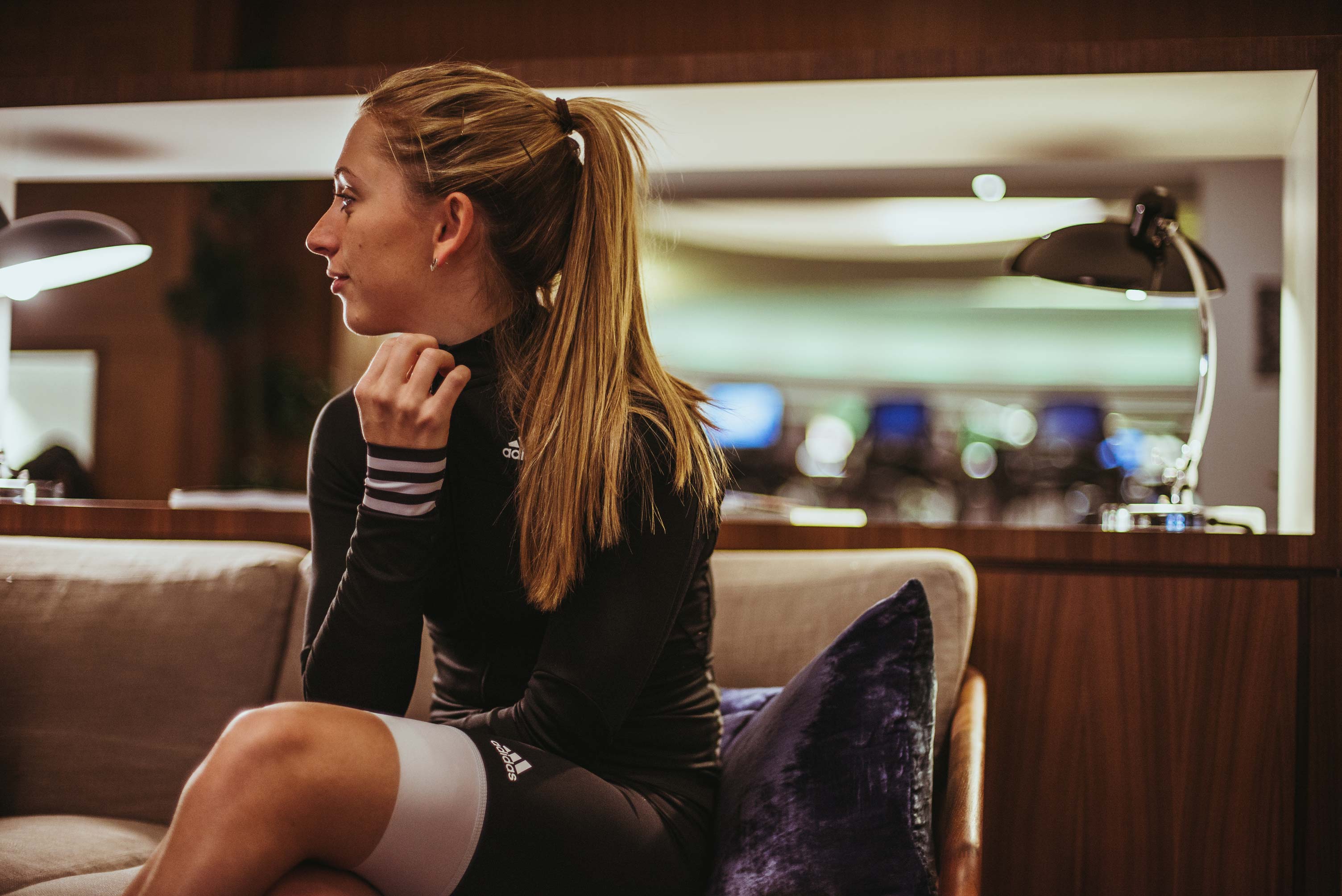 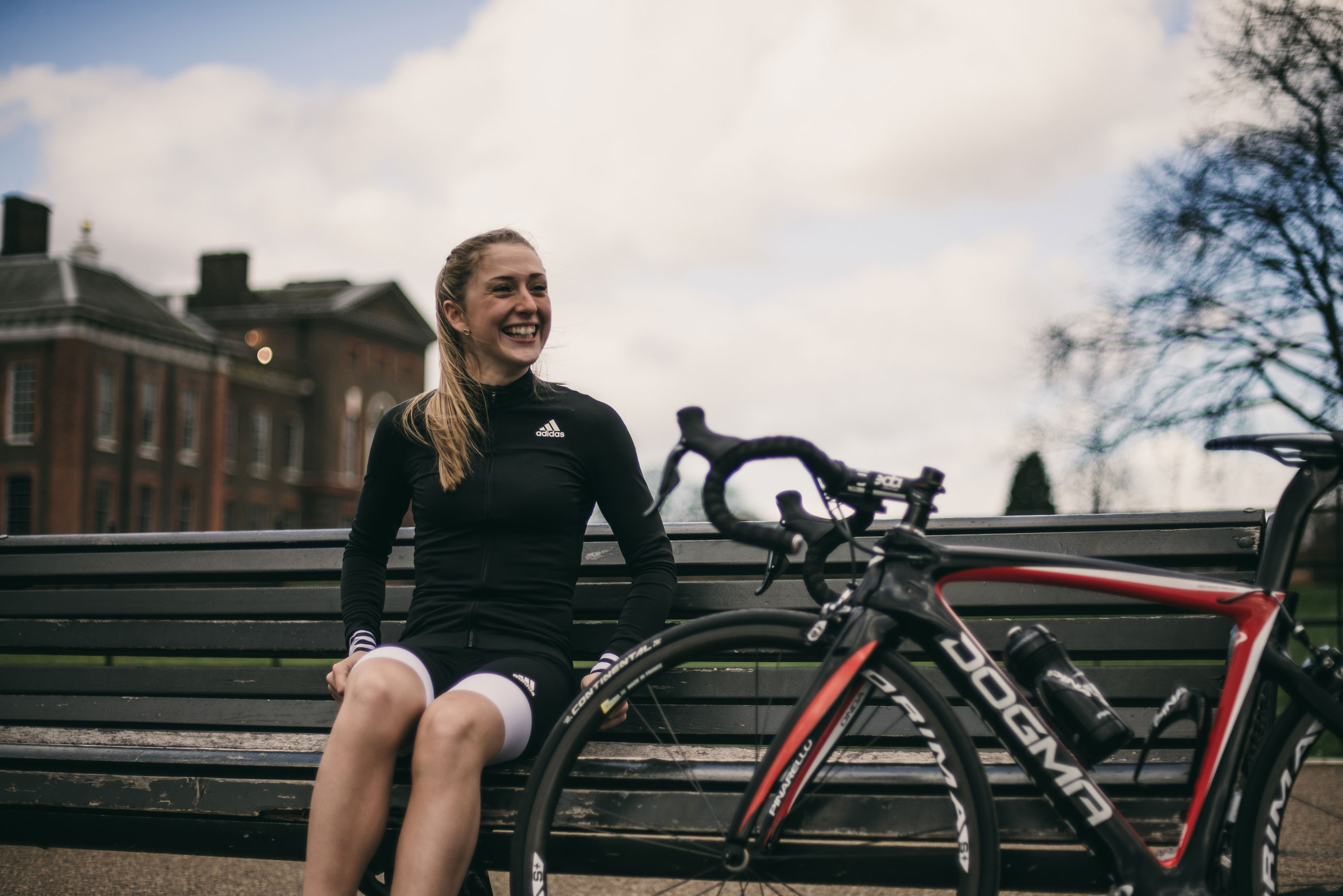 Her family supported her throughout her long and tough journey to London 2012, where she picked up two gold medals at her first Olympics. She set a world record in the women’s pursuit team, alongside Joanna Rowsell and Dani King, and dominated the omnium, a technically challenging multi-discipline event – track cycling’s answer to the decathlon.

At just twenty-two, Laura has become an ambassador for cycling, carrying a huge weight of expectation and the responsibility of inspiring the next generation. She fondly remembers watching Britain’s most successful female cyclist Victoria Pendleton race as a teenager, and is determined to encourage more women to take up cycling. To that end, she recently launched Adistar, a range of Adidas gear to appeal to those put off by Lycra, and is pushing hard for more schools to offer cycling.

The weekend before we talk, Laura placed silver in the omnium and the team pursuit at the World Championships in Paris, which were seen as a crucial display of form before the 2016 Olympics in Rio just eighteen months later. After the incredible haul of gold medals at Beijing in 2008 and London 2012, cycling fans have grown to expect British dominance on the track and the team came in for some strong criticism.

As the pressure to perform grows, the mental aspect of racing has become increasingly important. “It could have happened any time in my career, but it didn’t happen to me until I won in 2012,” Laura explains. “People start expecting you to win. With me, that’s when I sort of had to get control of it because it does start ruining races. If you go on the start-line feeling like the whole world is on your back, all that pressure on you, it’s only ever going to go one way.” 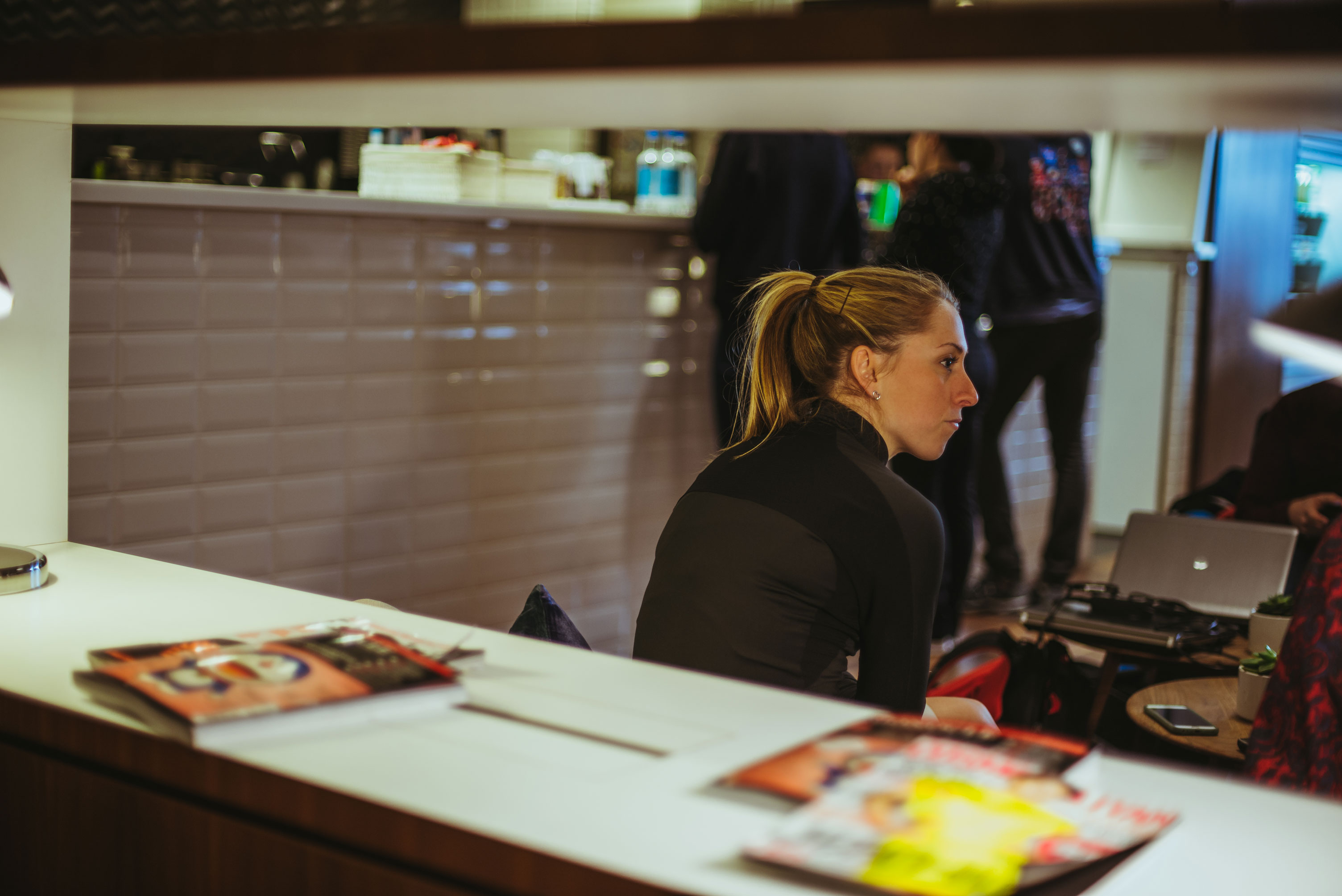 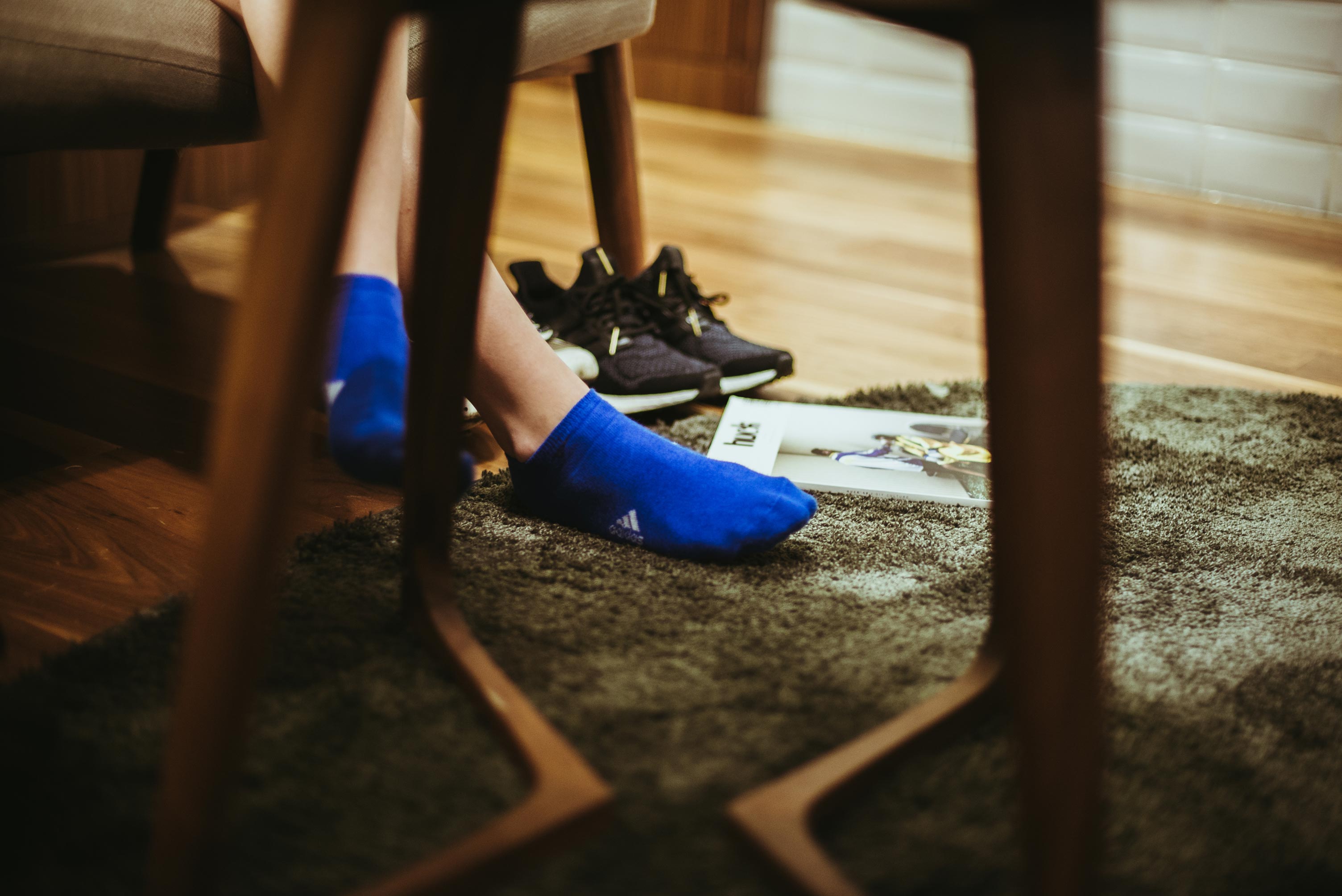 Over the last few years, the Great Britain Cycling Team have had a secret weapon: the chimp. Influential sports psychologist Steve Peters used the image of the chimp to help riders get to grips with their mind, to push out distracting, negative thoughts and achieve their full potential. “If you’re a chimp and you’re under that amount of pressure, it thinks it’s going to go out and fight,” Laura explains. “It’s about just saying to yourself that you’re not going to war. It’s literally a bike race. [Steve] used to say, ‘Get a life’, because you are just riding around in circles. And it’s true! You get so wrapped up and so stressed about it. People aren’t going to hate me because I’ve lost a race. But at the time that’s what it feels like.”

Peters left British Cycling after the 2012 Olympics, but has been credited with contributing to the team’s success. Support from team-mates and coaches helps, but for Laura, her family have always kept her riding at her stunning best. “The most important thing is the people around me,” she explains. “My parents are always there. I’m with my dad throughout the competition. My mum gets cycling in a way, but she doesn’t get the tactics and stuff, so it’s nice to have her there because it’s almost like an outsider. She sees it for what it is. They just make you feel normal, they make me realise that losing the Worlds or losing a race isn’t the end of the world. There’s always another race.”

Linkedin
RELATED ARTICLES
OTHER ARTICLES
To mark the anniversary of the mass trespass of Kinder Scout, a group of hikers came together with the intent of creating a new, fully inclusive culture for rural spaces.
Following the release of his newly republished 1991 book, Redheads, the American photographer reflects on his celebration of ginger people and their magnetic power.
Photographer Phyllis Christopher recalls capturing sex and protest at a time when the city had become a haven for the queer community.
In the latest OFFF Dispatch, the enigmatic designer dives into his process, connecting the dots between his unique and varied creative output.
Members of the collective share some of their reasons to run as part of #UnitedBySummits, a campaign that looks to uncover transformative power of the outdoors.
Photographer Robin Graubard’s debut book offers an unflinching record of turbulence and change across the Balkans.