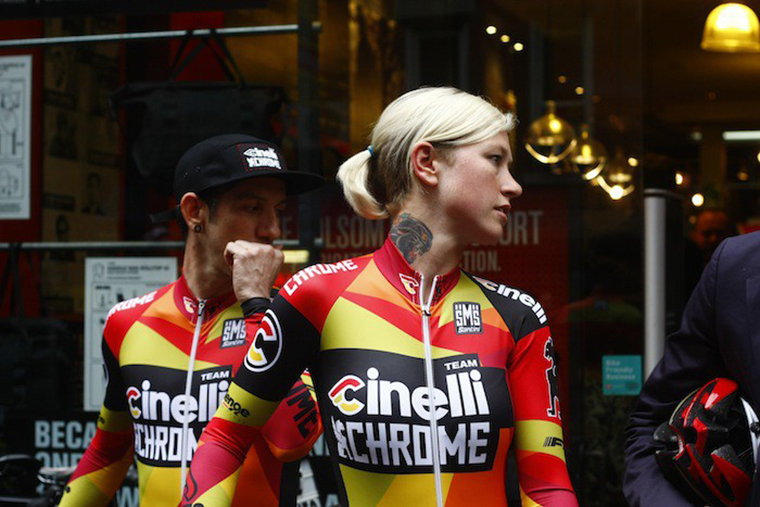 A childhood in ballet, surprise later life decisions and injury have all helped cycle racer Kelli Samuelson push women's cycling to the next level.

A childhood in ballet, surprise later life decisions and injury have all helped cycle racer Kelli Samuelson push women's cycling to the next level.

“For a long time I was showing up to races and everyone was like ‘who’s that weird tattoo girl?” says Kelli Samuelson who’s discussing the large collection of ink that, by her own estimations, covers around 60 percent of her body. “I’ve always been super creative and they’re another form of expression for me, but they’ve taken a back seat for the moment. You don’t want to get anything done and then have to go sweat on a bike the next day, it doesn’t feel good!”

Talking to Kelli for a matter of minutes it’s obvious that her unique approach to cycle racing goes further than her look. Her commitment to the sport, most recently as founder of LA Sweat, a road team she created to challenge the traditional model of how professional teams work, has placed Kelli firmly at the heart of the Californian scene. “I was finding a lot of teams, especially locally, were run by men and were male dominant, and the women’s teams were getting the leftovers, in terms of sponsorship and support,” she explains. “I wanted to create a new avenue for women to race, and having had some success with my old team I really wanted to support my friends and fellow riders who wanted to do more. So I started my own team.”

After securing a number of sponsors and putting together a team of like-minded, dedicated riders, Kelli implemented her idea, albeit with a steep introduction to the realities of being team manager and rider. “Luckily I’m kind of weird in that I really like organising things so running the team works for me,” she jokes. “It’s definitely taken on a lot more of my time, when we began everything was very loose and on a handshake, now it’s all on paper. Its totally more serious, but we don’t like to take ourselves so seriously.”

The surprising thing is that Kelli only started riding competitively a relatively short time ago. After growing up in Boise, Idaho as a ballet dancer, a vocation that she gave careful consideration too throughout high-school, a chance alleycat race at college sparked her passion. “Going to college in Seattle I figured I didn’t need a car to get around so I sold it and bought a bicycle,” she says. “In the beginning I had no desire to race whatsoever, but my friends started talking about doing this street race which sounded fun, so I entered it and ended up doing fairly well. That was my lightbulb moment, I decided that I wanted to race my bike all the time. So the next week I bought a road bike, got a coach, and about seven months later I quit everything to ride full-time. I made huge life decisions really early and went with it.”

Following this decision, which her parents initially thought was crazy – “They totally get it now though” – Kelli progressed quickly through the racing ranks, eventually signing to Team Cinelli Chrome and becoming a key member of the Ritte Women road team. Things were moving so well that she was eying trials for the Rio Olympics until finding herself on the wrong side of a chronic leg injury. “I was riding with this pain and it got to the point where it felt like scorching hot saw blades cutting my legs,” she says. “Then I was racing in Barcelona and there was a moment with about three laps to go I went into a hairpin turn at full speed and my hip just popped. I finished the race but I knew I was done for the season.”

A battery of tests and a batch of X-rays later the doctors found that the ball of her femur had to be reshaped, which necessitated reconstructive surgery and an eight-month layoff. “It’s been pretty frustrating at times,” she acknowledges. “I’ve buried myself into running LA Sweat, but you know how athletes are, we want to ride and we want everything to go 10 times faster than it actually does.”

With the rehab nearing its gruelling end, Kelli is working her way back with rides on the Red Hook Crit tour, and stages on the US Domestic circuit. And with a renewed focus on cycling and a run at the 2020 Olympics beckoning, Kelli wraps up our interview with a reflection on the journey that got her to this point. “Its tough, but I enjoy the personal battle,” she says. “I always think if you’re not having fun don’t do it. I mean what’s the point, we’re all capable of making decisions, so why not make a decision to do something you will enjoy.”

Linkedin
RELATED ARTICLES
OTHER ARTICLES
Welcome to a world where anyone brave — or foolish — enough can race any motorcycle on an internationally-renowned dirt track.
The Morvélo Battle Royale sees a derelict market in Brighton become a Mad Max-style battleground of indoor oval track bike racing.
Thoughts on creativity from LA artist Geoff McFetridge as he builds his own “Human Powered Surf Exploration Vehicle.”