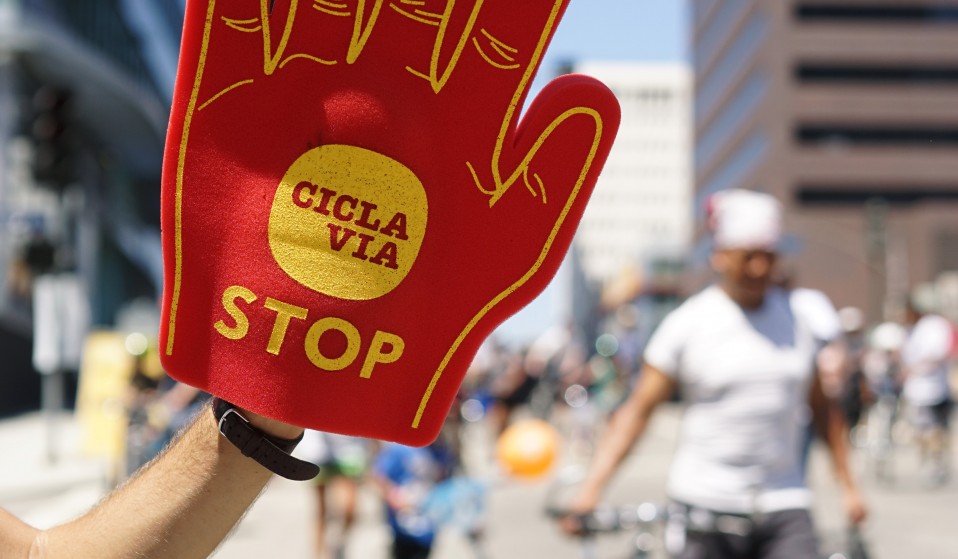 Taking to the streets has long been a mode of resistance around the world, and in Los Angeles it's not different. William Warrener traces collisions between transport, status and race at CicLAvia, LA’s biggest bicycle event.

Taking to the streets has long been a mode of resistance around the world, and in Los Angeles it's not different. William Warrener traces collisions between transport, status and race at CicLAvia, Los Angeles’s biggest bicycle event.

I’m standing on Wilshire Boulevard, one of downtown Los Angeles’s vital, iconic arteries, its battered concrete shimmering in the mid-August heat. A sixteen-mile stretch of history that includes bustling Koreatown at its eastern end, and the leafy seclusion of Beverly Hills to the west. Wilshire has borne witness to all walks of life, and some death too (think Biggie Smalls). 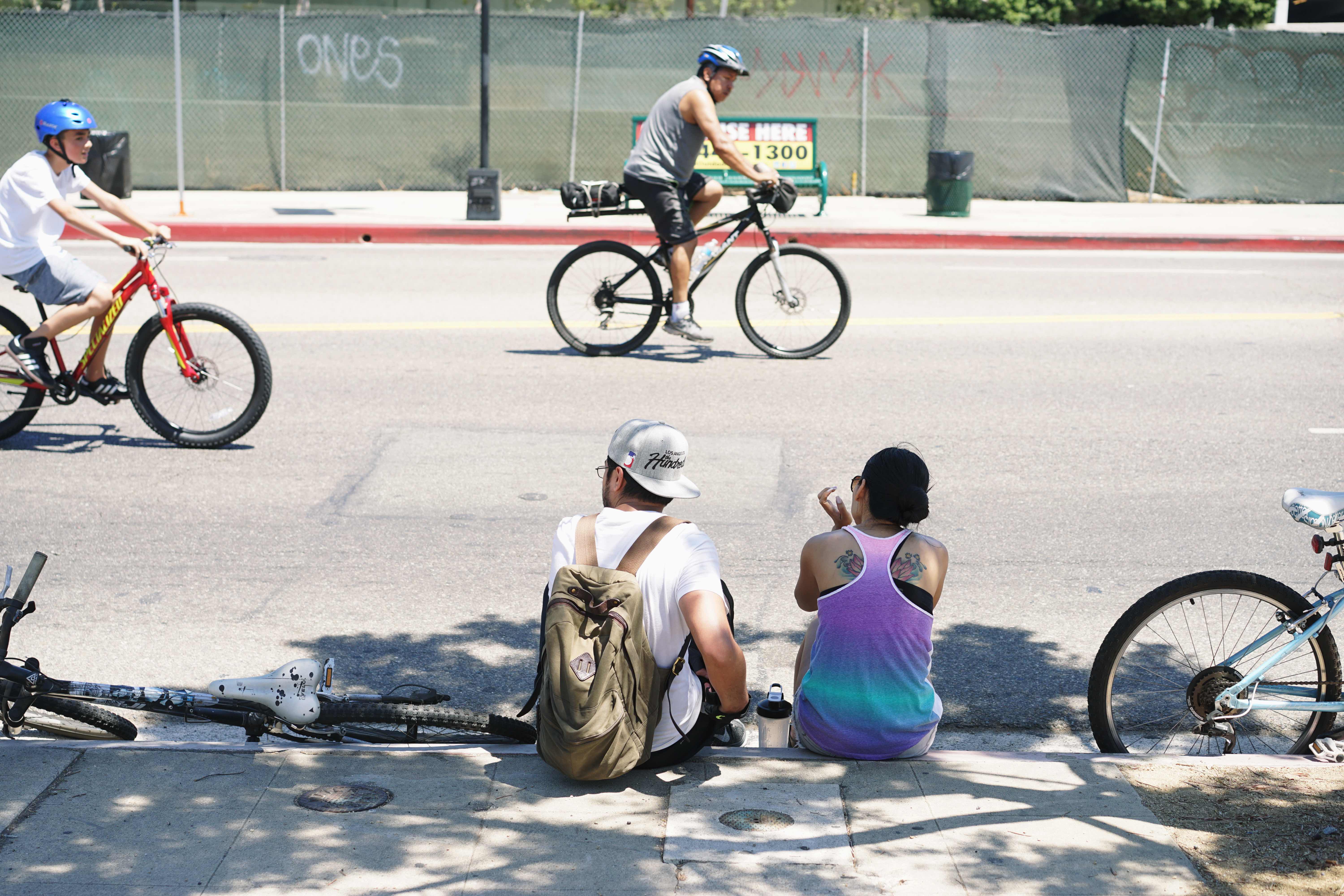 ‘Walks of life’ is an ill-chosen phrase. The boulevard, like LA as a whole, isn’t exactly famed for having a sea of pedestrians. On any other sweltering afternoon this four-lane gauntlet would be enacting its typical motorised assault: grunting engines, exhaust fumes, and the occasional snarling argument made more vicious by the presence of windshields to hide behind. A friend recently described LA drivers as the prototypes for online trolls.

Today though, the scene is radically, almost eerily different, thanks to a growing LA phenomenon called CicLAvia. Without a Chevy in sight, thousands of cyclists are streaming in each direction along a 3.5 mile portion of the boulevard that’s been closed to cars for the day. The premise is simple: turn up with your bike, get on it, ride around a bit. 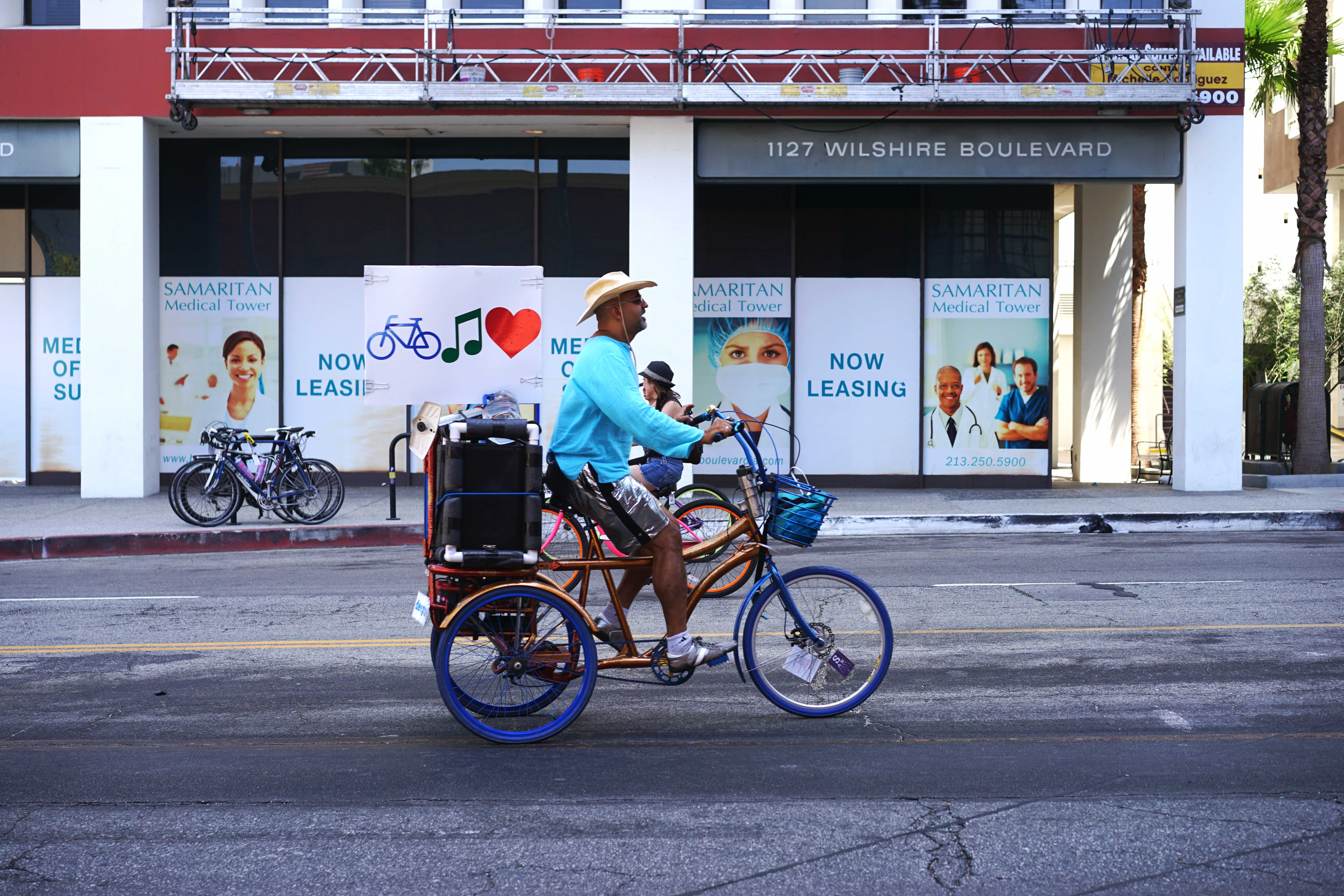 People warned me that it would be crowded. The irony is that, even with this many participants, removing cars from the equation means that it’s anything but. Quieter sections of the wide road feel a bit like a family-friendly version of 28 Days Later. It’s a stark reminder of the sheer amount of space that Los Angeles sacrifices for its worship of the automobile.

There have been 18 CicLAvias since 2010, taking place in districts all over LA. They take their inspiration from Bogota’s ‘ciclovias’ (meaning cycleway, ya geddit now?), road-closure events that attract millions of Columbians every week. Here on Wilshire there’s a diverse, happy crowd; I talk to Chicano families out in force, their children towed along in those private buggies that you wish were available when you were a kid; flat-peaked caps with sound systems attached to their handlebars; hipsters from Silverlake; a self-styled preacher from Long Beach spreading God’s word by way of a placard attached to the saddle, wincing at the barrage of ‘Uptown Funk’ that hits him from a passing pennyfarthing. 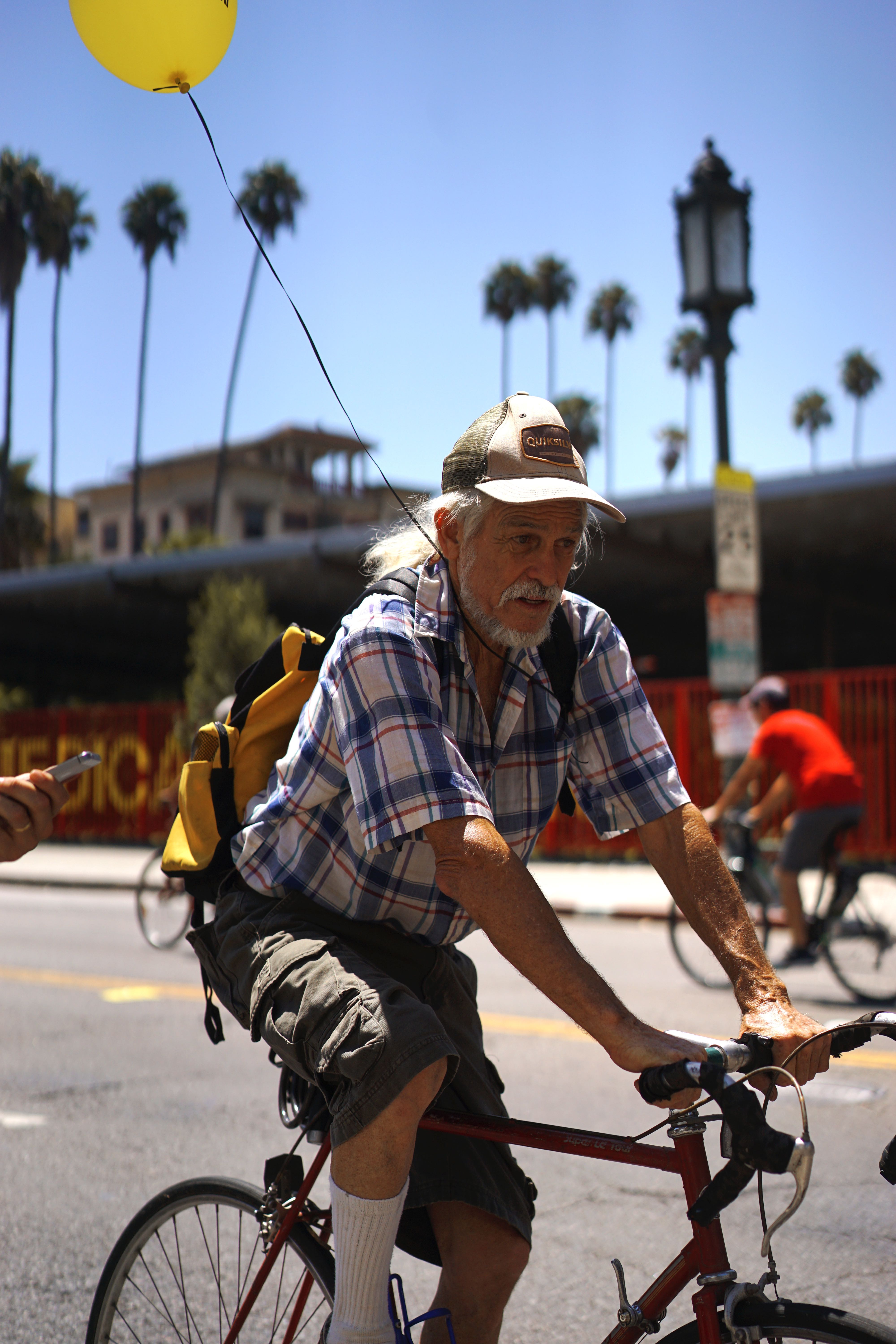 Wilshire may be iconic but it’s by no means beautiful, and to non-Angelinos the idea of riding your bike three miles along a concrete highway in searing heat alongside thousands of other cyclists, before turning around and riding back the other way, may seem a little odd. Here, however, it represents something far more profound.

LA’s bicycle movement, which clicked into gear some twenty years ago, has from the outset possessed a deeply political and urgent edge. Critical Mass was first staged here in 1997. Three years later it directed itself at the Democratic National Convention, leading to the arrest, mistreatment and alleged sexual assault of 71 riders at the hands of the LAPD. In 2004 Midnight Ridazz was founded, a monthly late-night excursion between a small group of friends that’s grown to include hundreds. By promoting an alternate transport vision, countercultural initiatives like these have made possible the development of an accessible event like CicLAvia. 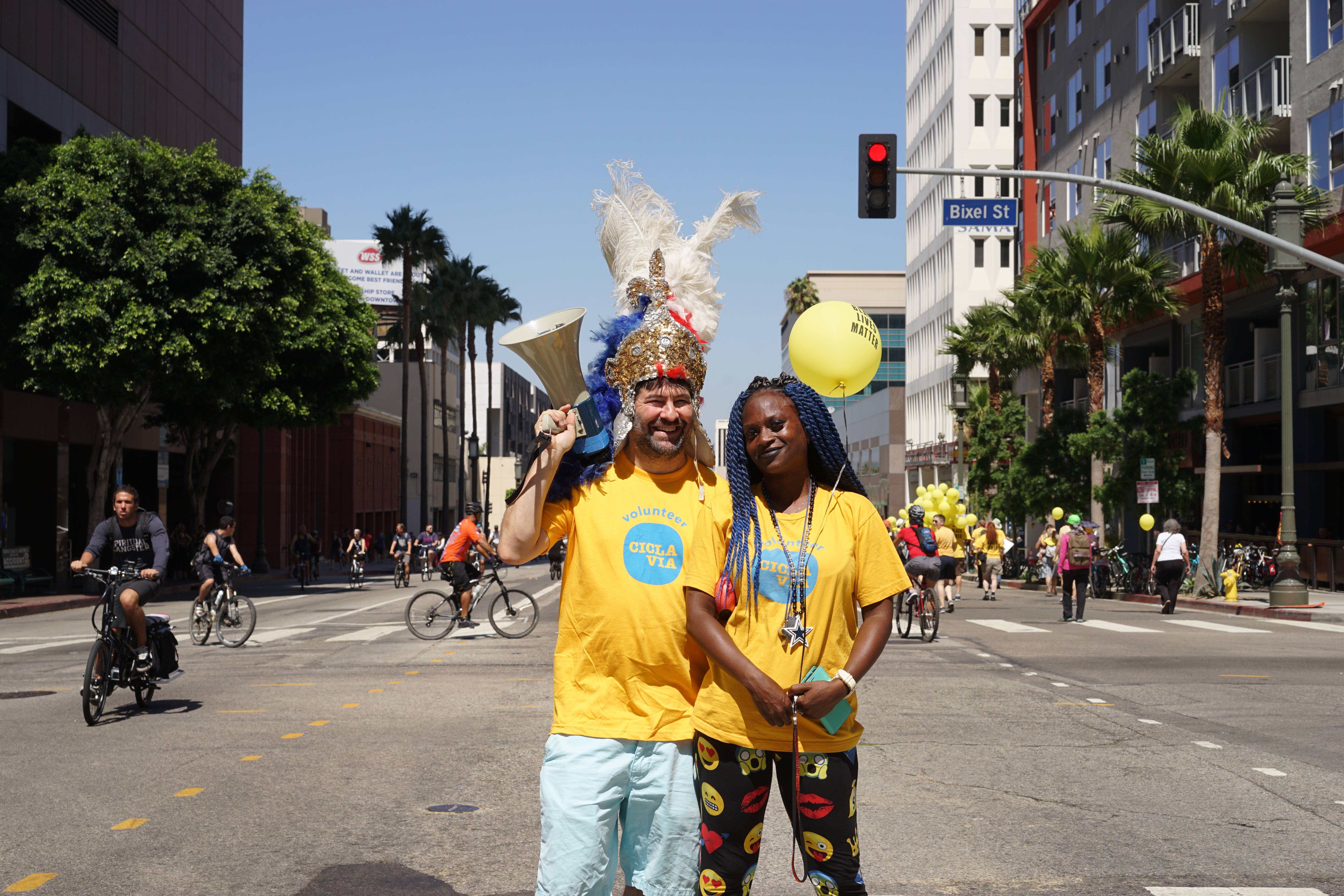 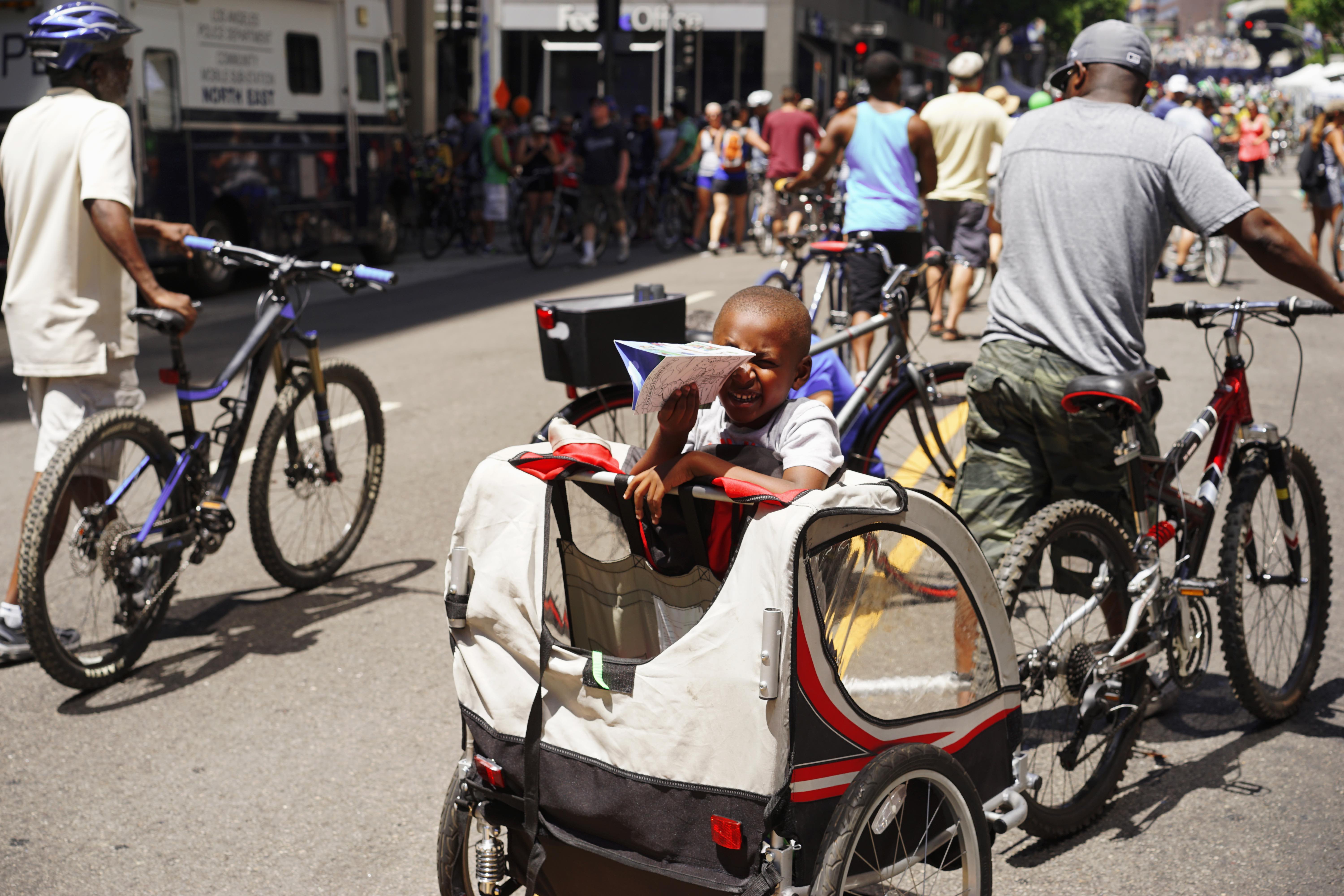 The city’s bicycle movement is about more than transport, however. In a land of four-laned high streets, where each strip mall requires its own parking lot that pushes it back even further from the avenue’s opposite side, the historic ‘social’ function of the street is largely lost. Adonia Lugo, one of CicLAvia’s co-founders and an LA street anthropologist, tells me about what takes its place. “Transportation in this region”, she says, “is a very performative space, where you show people whether you’re successful or not. If you’re not driving a car it seems like there must be something wrong, most likely that you’re living in poverty.”

CicLAvia, she explains, started as an attempt to help “restructure social relations”, away from drivers performing their status and towards humans interacting with each other in the street. 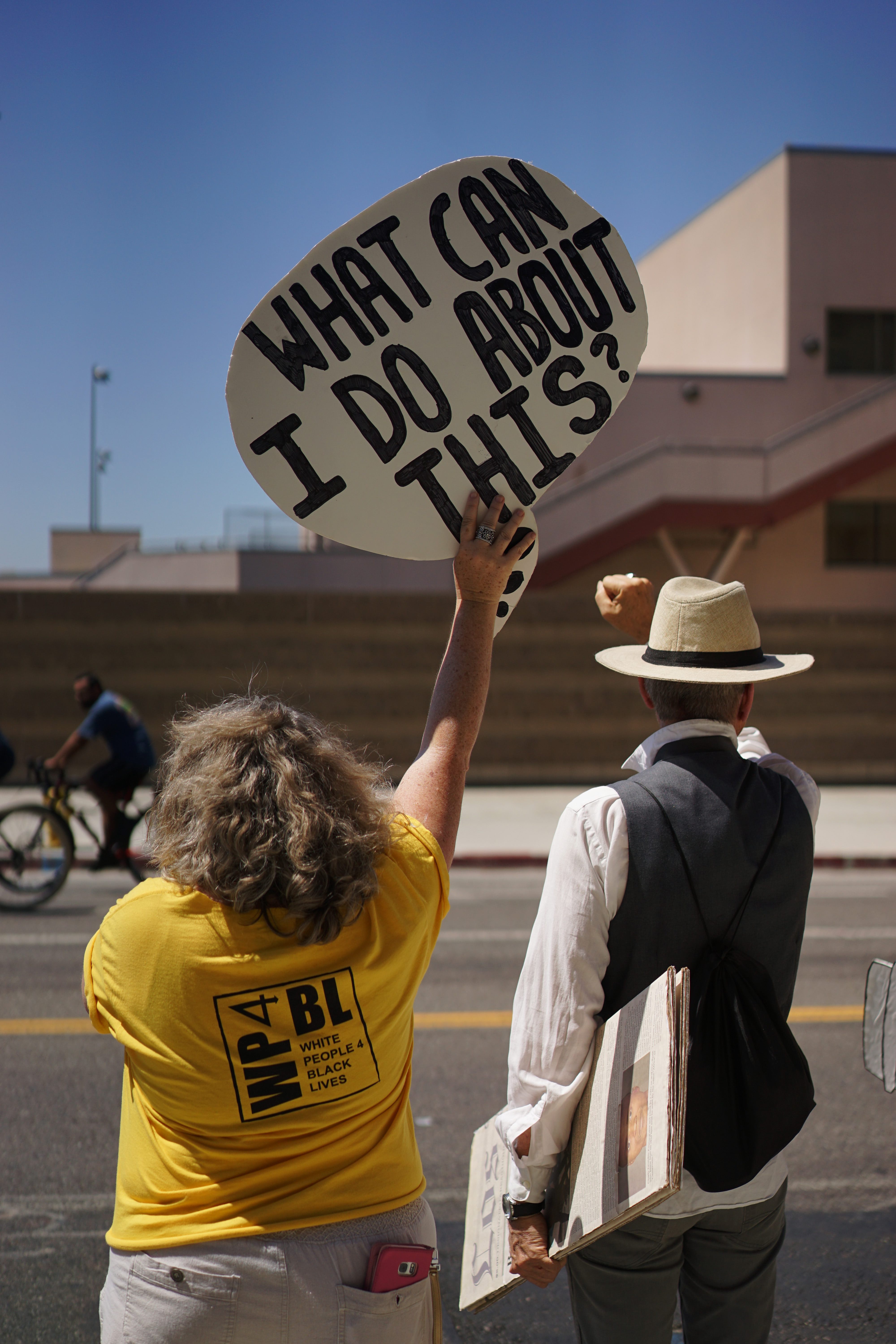 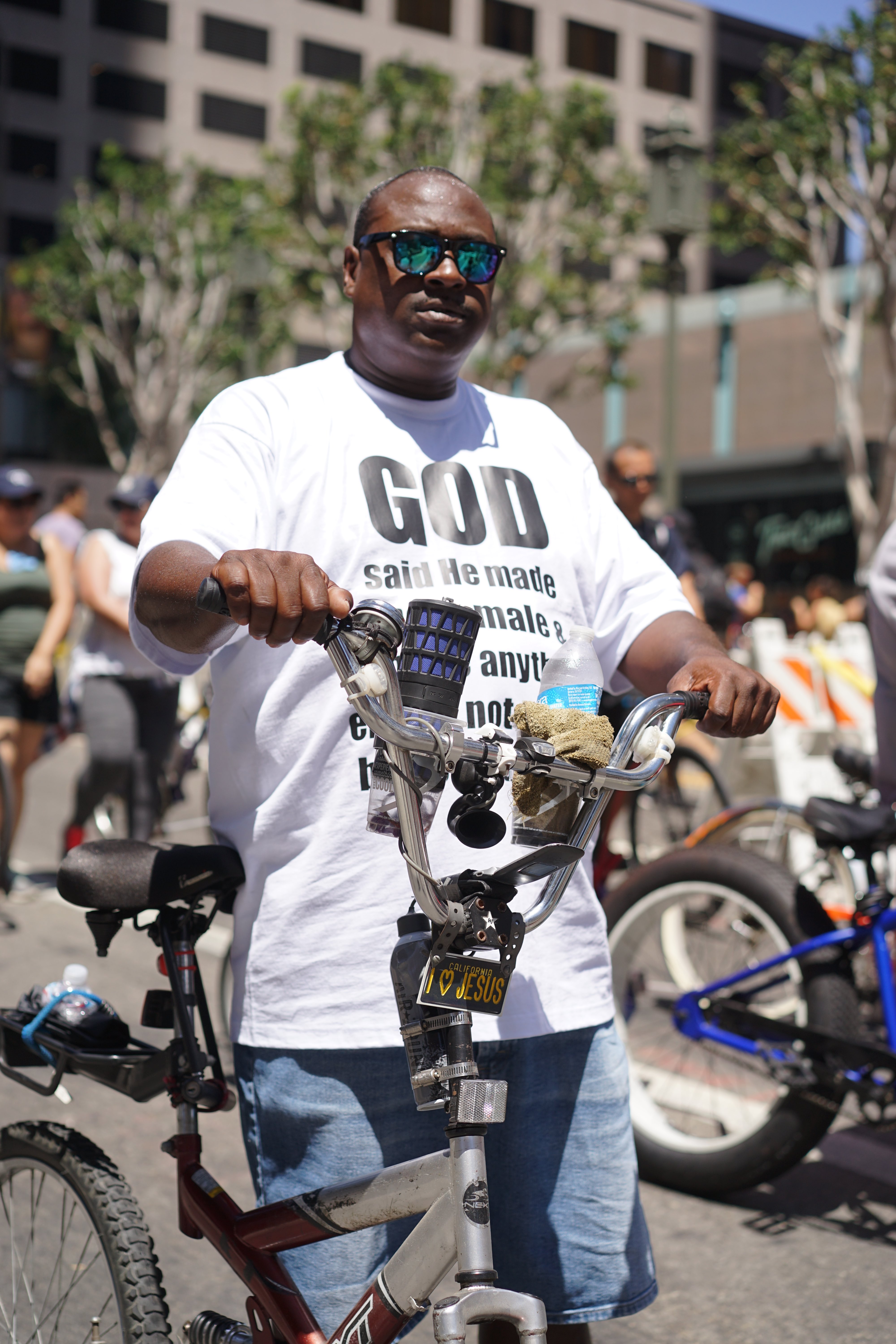 Being so rare within LA, this effect makes CicLAvia a valuable temporary zone for other forms of public expression that are ostensibly unrelated to cycling. Back on Wilshire, a giant mass of yellow is noisily making its way up the hill. No bikes, but balloons, banners and street performers calling out the names of black US citizens recently killed by police. 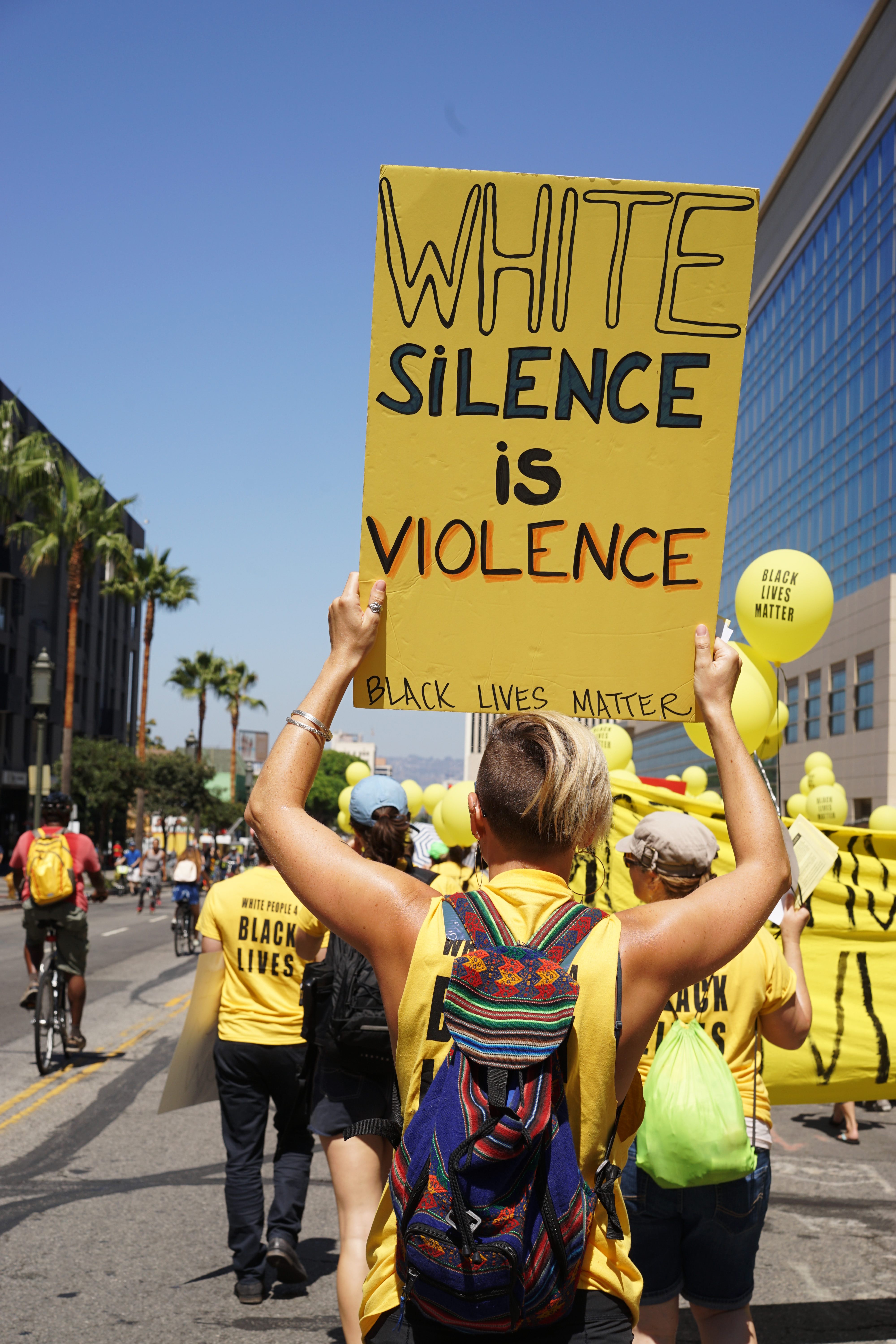 It’s a protest organised by White People 4 Black Lives, a movement that‘s working to build support for racial justice amongst the white community. Its organiser Jason David tells me that “CicLAvia is a progressive vision of a day in Los Angeles, an implicit political movement. Tens of thousands of people show up in a good mood, and we want to participate in a way that compliments that greater vision of a Los Angeles that’s not so racially segregated, where people live in their bubbles and don’t interact with one another.”

Despite today’s presence, this idea of a broader festival of protest is something that Lugo hoped CicLAvia would bring about, but which she thinks has largely been anaesthetised. The event is certainly no grassroots party: Nike and the controversial LA Department of Water and Power are listed as sponsors, the City of Los Angeles as a main partner. “CicLAvia’s now so caught up in political capital that it can’t be oppositional”, Lugo suggests. “It’s so popular that politicians really want to be associated with it, and those interests certainly don’t want to see protests happening in CicLAvia spaces.”

Perhaps, in a society as commercially totalitarian as LA, such alliances are vital to the success of the event. And yet the more uncomfortable, less acknowledged reasons propelling the continued dominance of car culture in LA make CicLAvia an entirely fitting stage upon which to protest racial injustice. 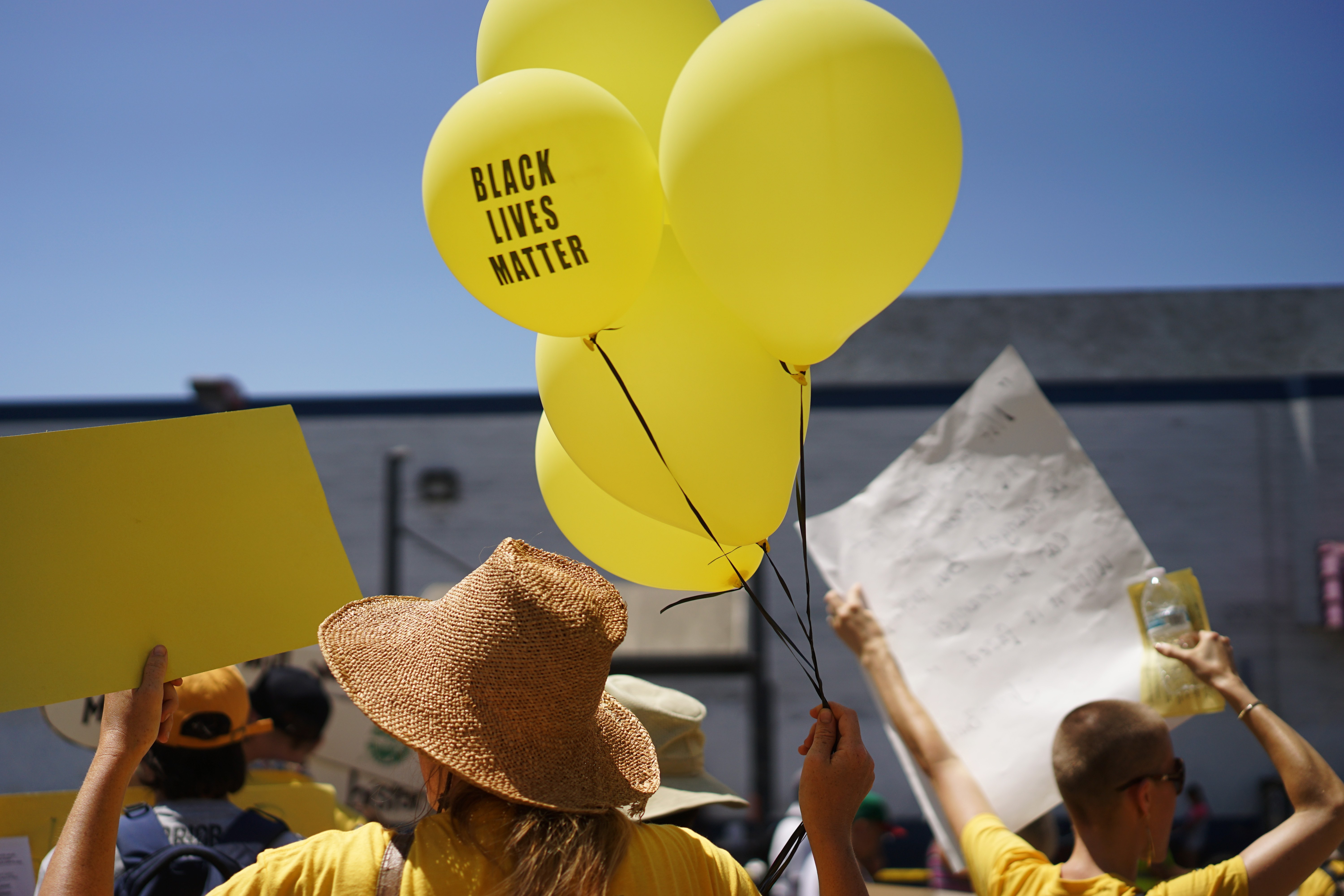 Worse than conveying status, worse than perpetuating vast commuting distances as the norm, cars are used as protection from the outside world. They’re a symptom, Lugo thinks, of poor racial integration and social cohesion.

In black communities in particular, where people are subjected to excessive police attention, cars bring a degree of invisibility in comparison with the nakedness of the street. “The shitty way that people interact with each other in streets is actually rooted to deeper legacies of race and class inequality”, Lugo says. “Until we start addressing that more directly it’s unlikely that people will give up the security of the car, because that’s often the only security that they have.”

This tension places CicLAvia on a spectrum in terms of what the bicycle movement represents in LA. For some – the dominant swathe – it means better physical infrastructure, bike-friendly streets and greater funding from City Hall for sustainable transport. For Lugo and others that I’ve met, it means something deeper, rooted in identity; bicycling stands for social justice, a disruptor of hierarchies and both a tool and symbol for the rejection of fear. Interventions like CicLAvia can be the most powerful way to express that, but in the process of being co-opted by already dominant voices they risk being muzzled.

On Wilshire, I make a beeline towards some shade on the cracked sidewalk. ‘Uptown Funk’ returns, clashing horribly with a BMX rider pumping out Nate Dogg. It strikes me that this is precisely what we all came for.

Linkedin
RELATED ARTICLES
OTHER ARTICLES
Activists and campaigners are fighting back against new laws that would seriously undermine the ability to take industrial action, calling it an attack on fundamental workers' rights.
Tristan O’Neill’s shots of dancers caught in moments of reverie at the height of rave’s golden age are a testament to the UK’s legendary club culture.
At his West Bank restaurant, Fadi Kattan established himself as the voice of modern Palestinian cuisine. Now, he’s bringing his innovative, bold flavours to the UK’s capital.
A new exhibitions brings together the work of photographers who documented the deep unrest of these pivotal decades.
A recent High Court ruling against the right to wild camp in Dartmoor National Park sparked the largest land protest in history – and campaigners say their fight is not over yet.
Photographer Sean Maung reflects on documenting a small town in Pennsylvania afflicted by high levels of unemployment, poverty, violence, crime, and addiction.