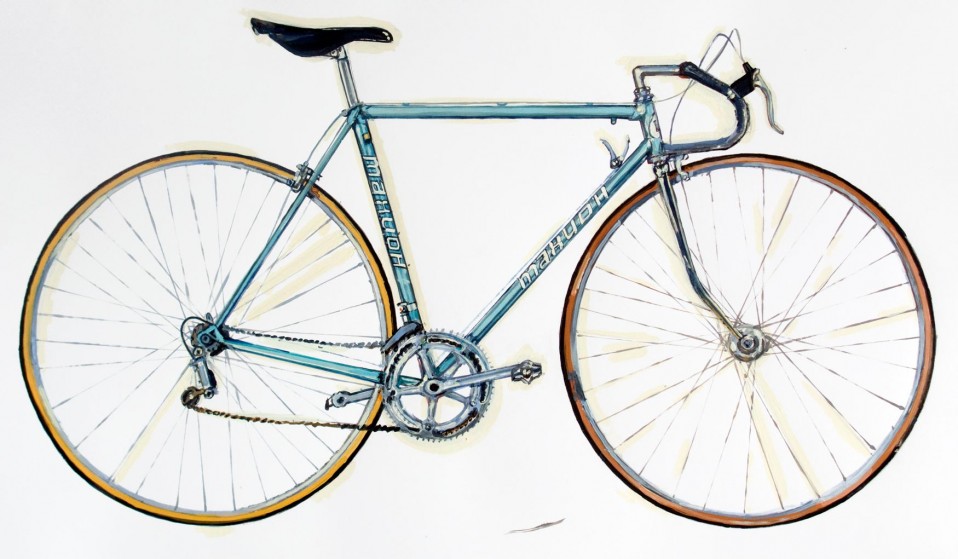 Brooklyn-based artist Taliah Lempert’s colourful bike paintings are inspired by the beautiful machines she spots across NYC. She explains all in our latest story from The Commuter Journal – a cycling paper made by Huck and Levi’s® Commuter™

Brooklyn-based artist Taliah Lempert’s colourful bike paintings are inspired by the beautiful machines she spots across NYC. She explains all in our latest story from The Commuter Journal – a cycling paper made by Huck and Levi’s® Commuter™

I grew up in Ithaca, upstate New York, and my dad was really into cycling. We did it a lot as a family so I grew up with it but when I left home to go to school in Boston I didn’t cycle for almost ten years. Then, one day in New York, where I was studying at the New York Academy of Art, I passed a bike shop and there was this bike that just caught my eye. For some reason it was super appealing to me, and it cost just eighty bucks, so I bought it, asked the guy for directions to the Brooklyn Bridge, and just began riding everywhere in New York. 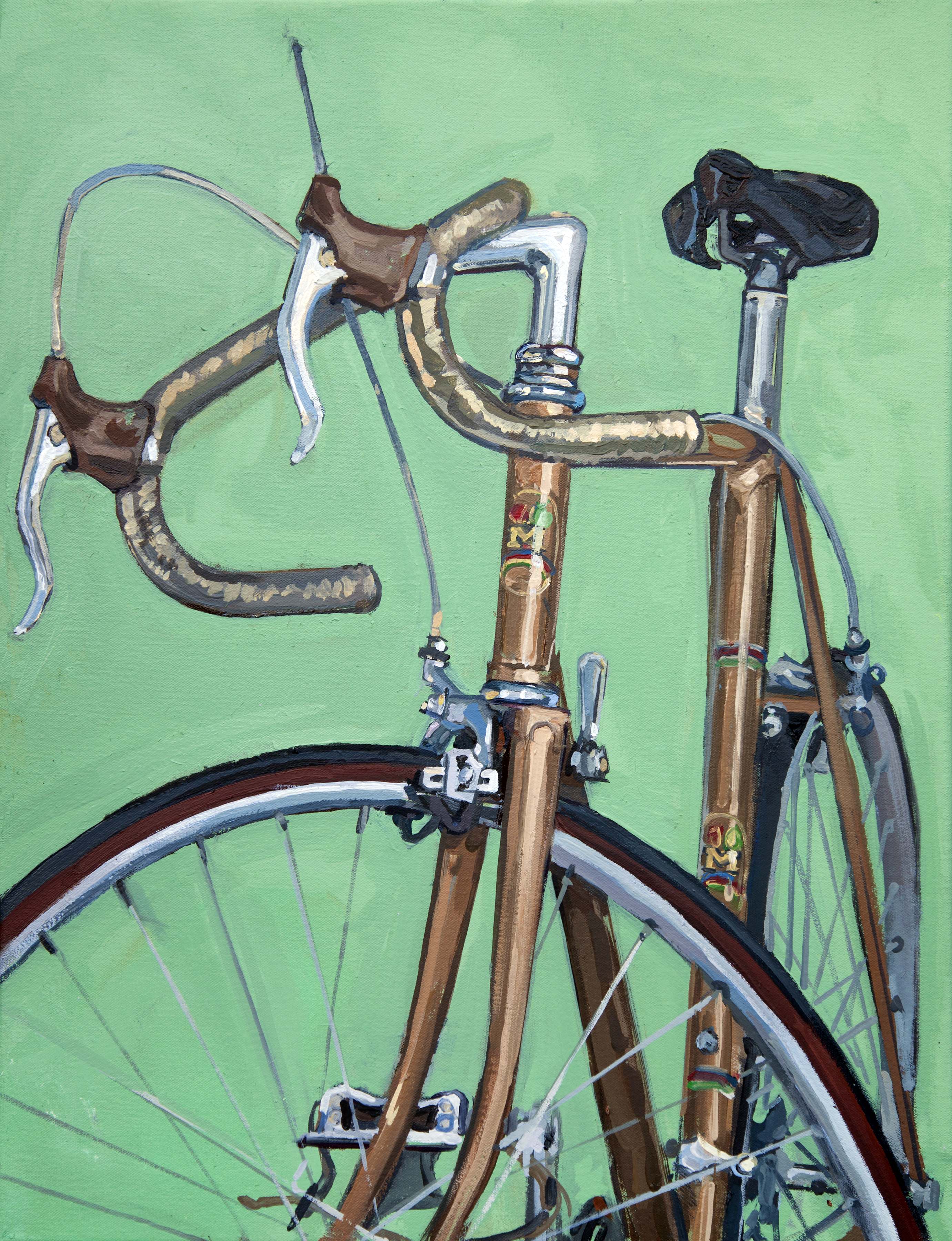 It changed the way I was in the city. Before the bike I always took the subway and I knew the city around certain subway spots. But suddenly with the bike I was going over the bridges, and going through the different neighbourhoods, and seeing the whole city and getting a feel for how it was laid out. And then whenever I would come back to my bicycle it would just be so fabulous and beautiful and so I started painting it. 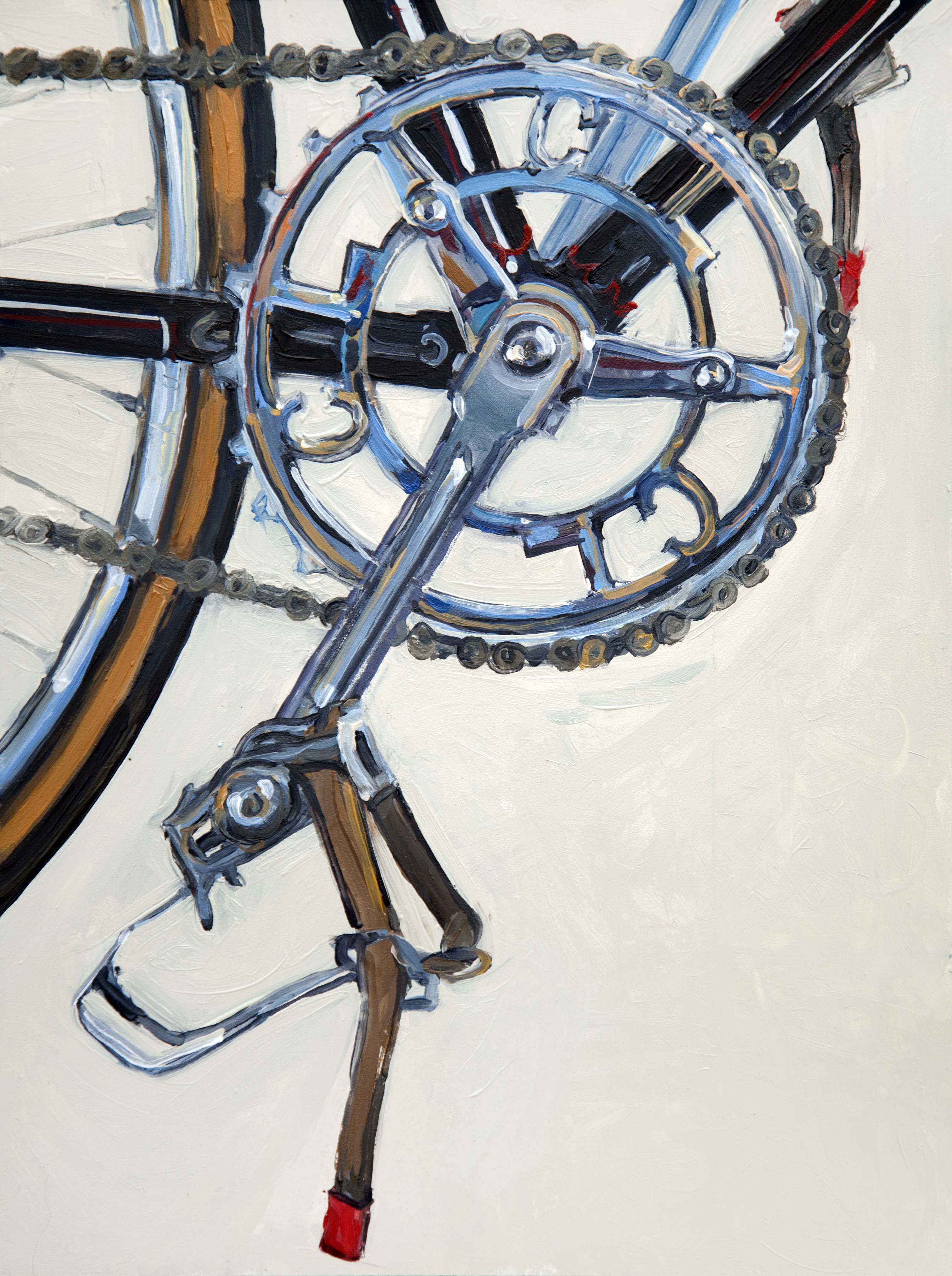 There are a bunch of reasons why bikes are awesome to paint. Bikes are made to carry figures and so I think there’s a certain structure and geometry to them that is really figurative. The way the shape of a bike abstractly breaks up space and makes a composition and gesture is beautiful. A bicycle is a very positive thing; you’re going somewhere, you’re moving forward, you’re harnessing your own power. And it makes a person, it makes me, more powerful and faster and able to do so much more. And that’s a very powerful and positive symbol. 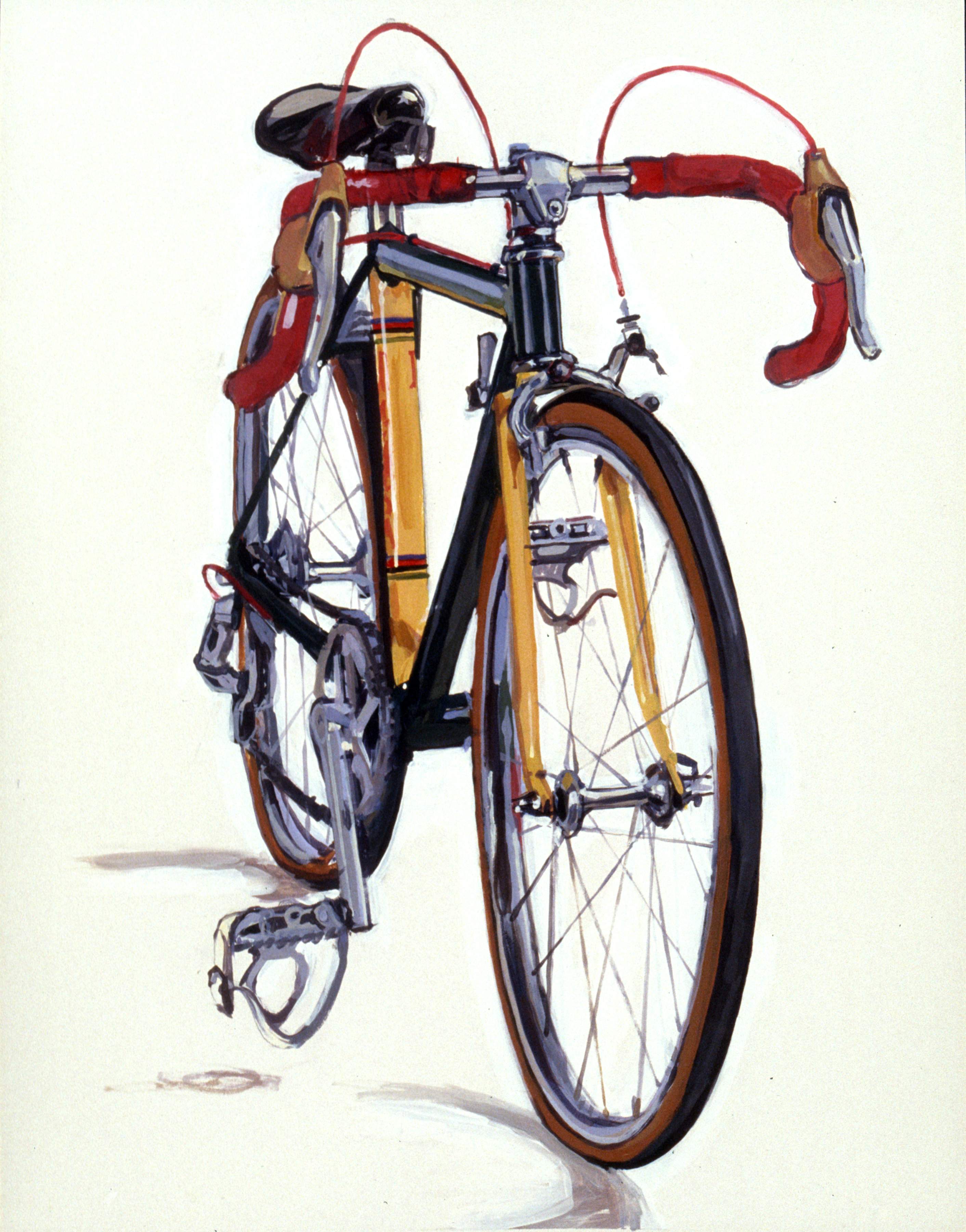 I spend a lot of time out and about in New York looking at locked-up bikes – the way the bars are, how they’re taped, the paint job. Sometimes the classically beautiful bikes catch my eye – new racers, the way they’re designed – but sometimes it’s the beaters, in bright colours and beautifully worn, that are wonderful. There have been a couple of times that I’ve made new friends by stopping people on the street to ask if I could borrow their bike to paint. 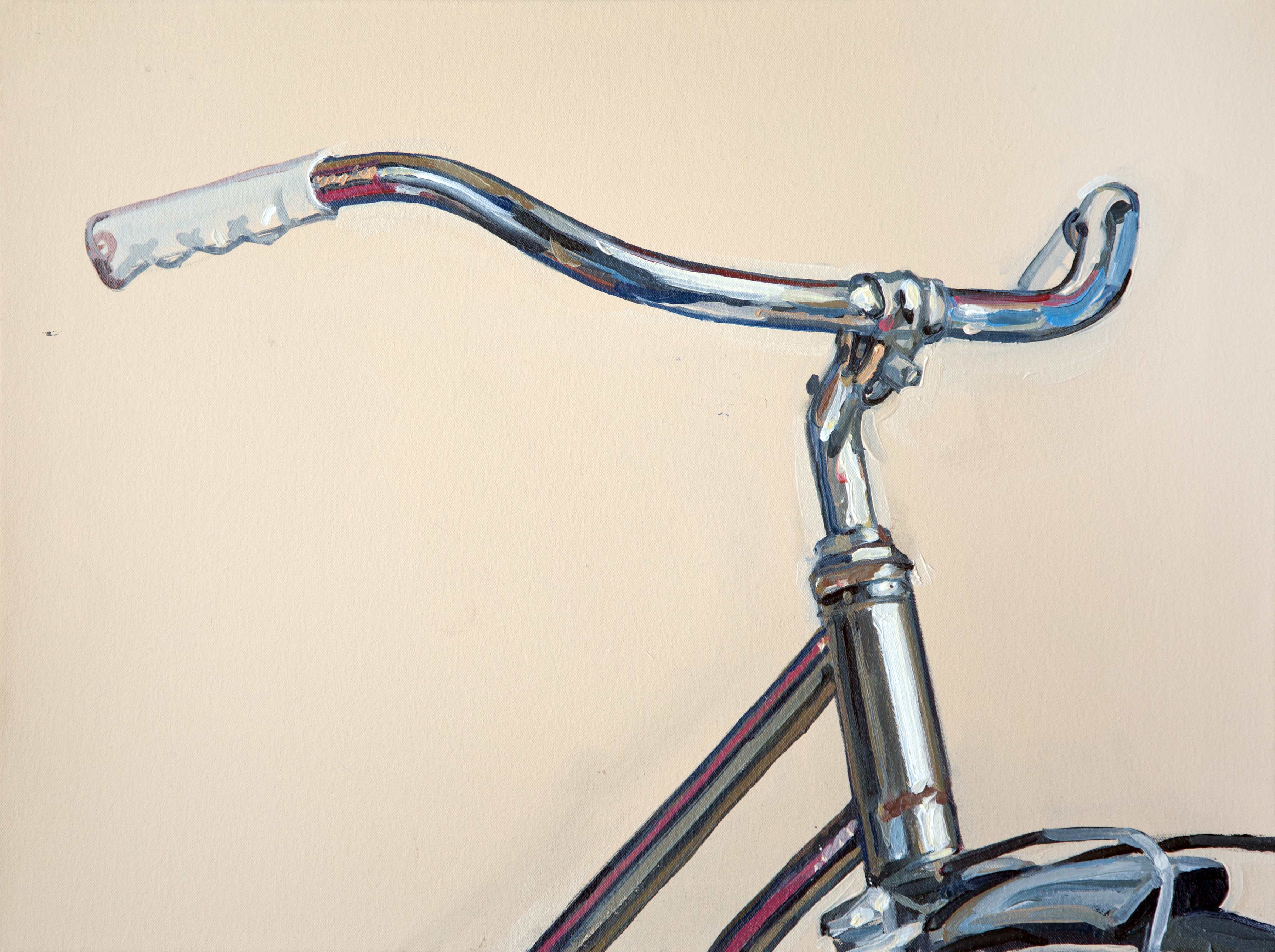 Working with a limited palette allows you to be more creative. If some things are a given, like my interest in bikes, then you wake up every day with a certain amount of focus. Most artists have certain things that they work with. I love bikes but I also love all the people I meet through them. The community is pretty great.

I’m lucky living in a city where you can cycle everywhere. The other week I took a different bridge and it was a whole new experience. It was one of these beautiful days, the sun was shining, the views were spectacular, and all the noises of the traffic and construction was coming together to be music. And I would never have seen that if I hadn’t have been riding my bike. Without it, I feel stranded.

Linkedin
RELATED ARTICLES
OTHER ARTICLES
A new edition of a seminal book brings together iconic images of the band onstage in their full glory and backstage in moments of unguarded camaraderie.
Proposals to introduce a minimum GCSE threshold for student loans will disproportionately affect those from marginalised backgrounds.
The author discusses the all-consuming nature of heartbreak, and turning the experience into an incisive exploration of love and loss.
The last few years have seen an increase in LGBTQ-led initiatives to feed the hungry, with many finding ways to stay afloat despite the challenges.
Photographer David Hoffman recalls documenting the extreme wealth inequality around Tower Hamlets and Hackney int the 1980s.
Photographer Matthew Brookes recalls following a group of young people in Venice Beach living in search of the perfect wave.