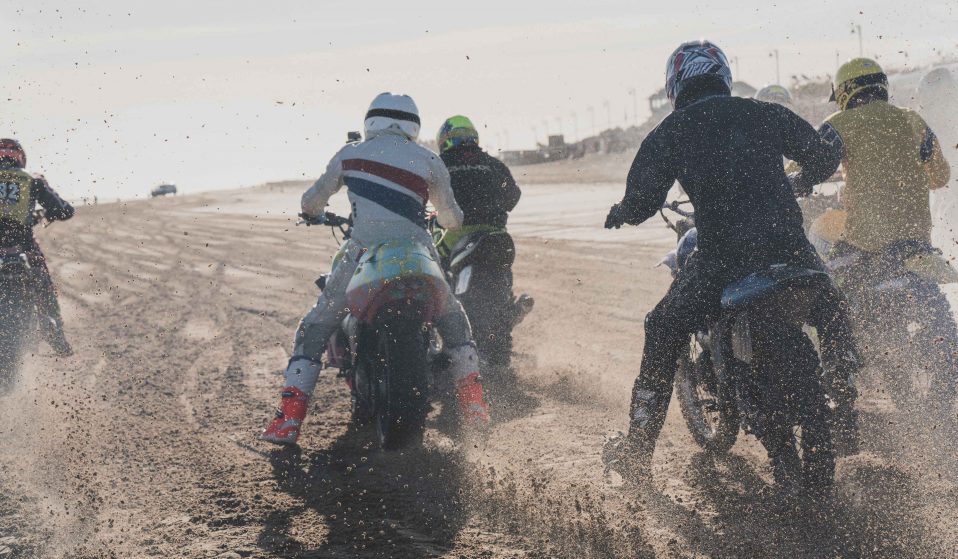 Founded by a group of hard-nosed riders back in the ’70s, the contest is a unique off-road event where getting messy is part of the game.

Founded by a group of hard-nosed riders back in the ’70s, the contest is a unique off-road event where one thing is guaranteed: if you’re not getting messy, then you’re not trying hard enough.

Every other Sunday from October to March, a sandy stretch of Lincolnshire coast plays host to one of the most unique racing events in the country. On these select winter mornings, Mablethorpe Beach transforms into a hotbed of activity as people and their motorbikes begin to filter onto the sand.

Against the backdrop of a forgotten seaside resort, the air explodes with the roar of engines as riders make their way to the start line. Overhead, storm clouds hover, threatening rain — but no one seems to bat an eyelid. At the marshal’s signal, the rope drops and the bikes lurch forward, kicking up a wave of sand as they shoot into the distance.

Mablethorpe Sand Race began in 1970 after a group of friends came up with the idea one night in the pub. “We wanted an activity during winter so we had the idea of a beach race,” says Chairman Neil Tuxworth, one of the club’s founders. “Seventeen people attended the first meeting, but as word began to spread, the event grew. By the mid ’70s, there were almost 200 riders. While there are now between 70-80 [regular] riders, on a good day there can be up to 3,000 spectators.” 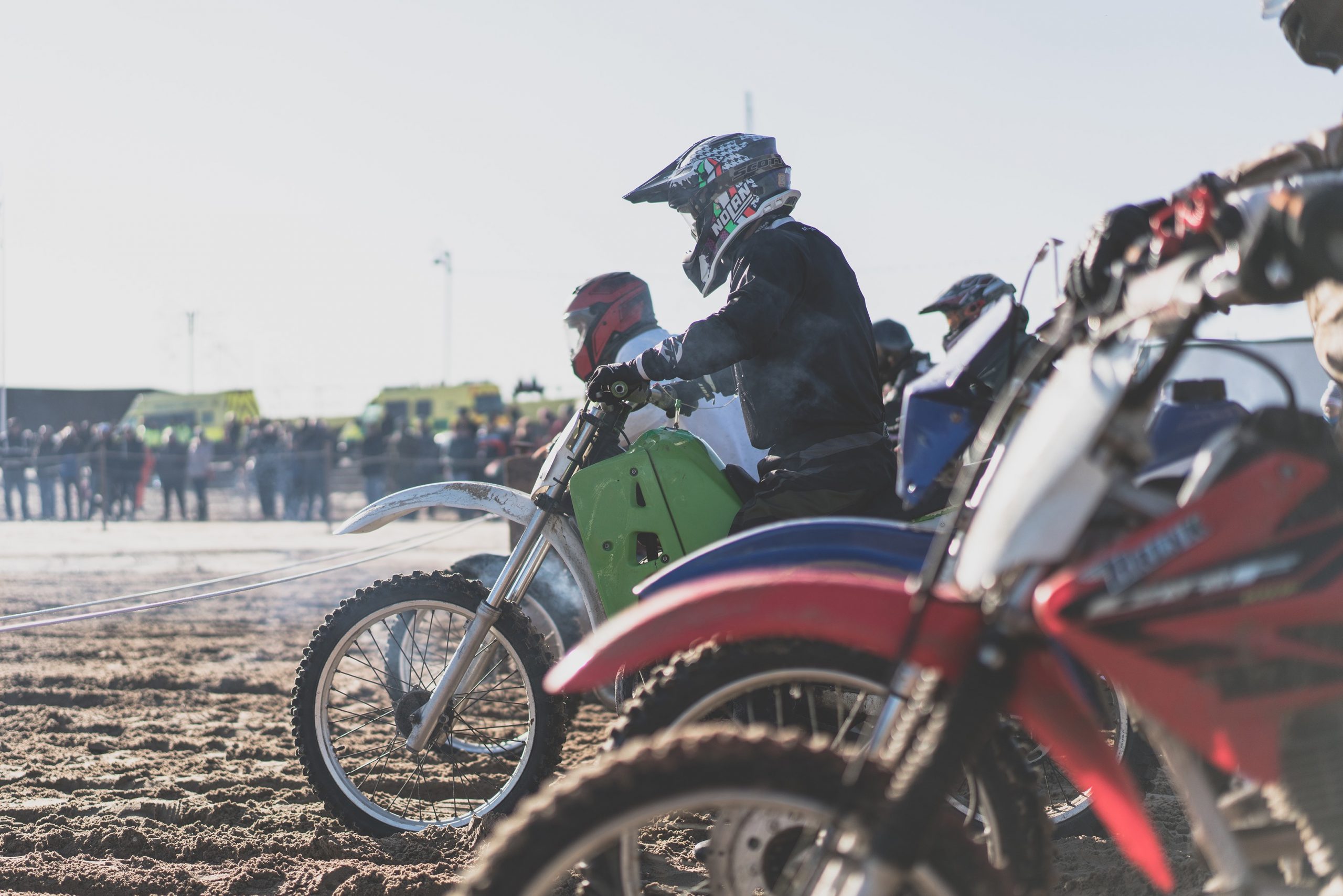 Now entering its 50th season, it draws people from the county of Lincolnshire and beyond — sometimes from places as far afield as Guernsey, over 300 miles away – to ride all kinds of motorbikes around a 600-metre track by the sea. Race times depend on the tide and the track itself is constantly changing. While it may be a beach event, it’s hardly sun-kissed and glamorous — but that’s the beauty of it.

Mablethorpe is special because of the freedom granted to the riders. No license is required to ride; everyone is welcome, regardless of age, ability, gender or riding experience. The bikes, meanwhile, range from homemade contraptions to high-end models purchased brand new.

For many, it’s not just the thrill of racing that brings them here, but the camaraderie. Older riders often step in to help younger riders, whether that’s lending them a spare part for their bike or giving them friendly pointers for when they’re on the track. If someone falls off, they’re quickly picked back up. When a new rider joins, they’re swiftly embraced by the community. “The people you meet through riding are amazing,” says 16-year-old racer Lizzie. “It’s become a way of life to me.”

By the time afternoon comes, the beach will, once again, find itself deserted. With riders and spectators gone, the tyre tracks left behind in the sand are the only proof that they were ever there. Soon, even they will be erased by the incoming tide. At least until the next meeting.

On a crisp Sunday morning, back in March of this year, Huck visited Mablethorpe Sand Race to find out more about the race from the people involved. 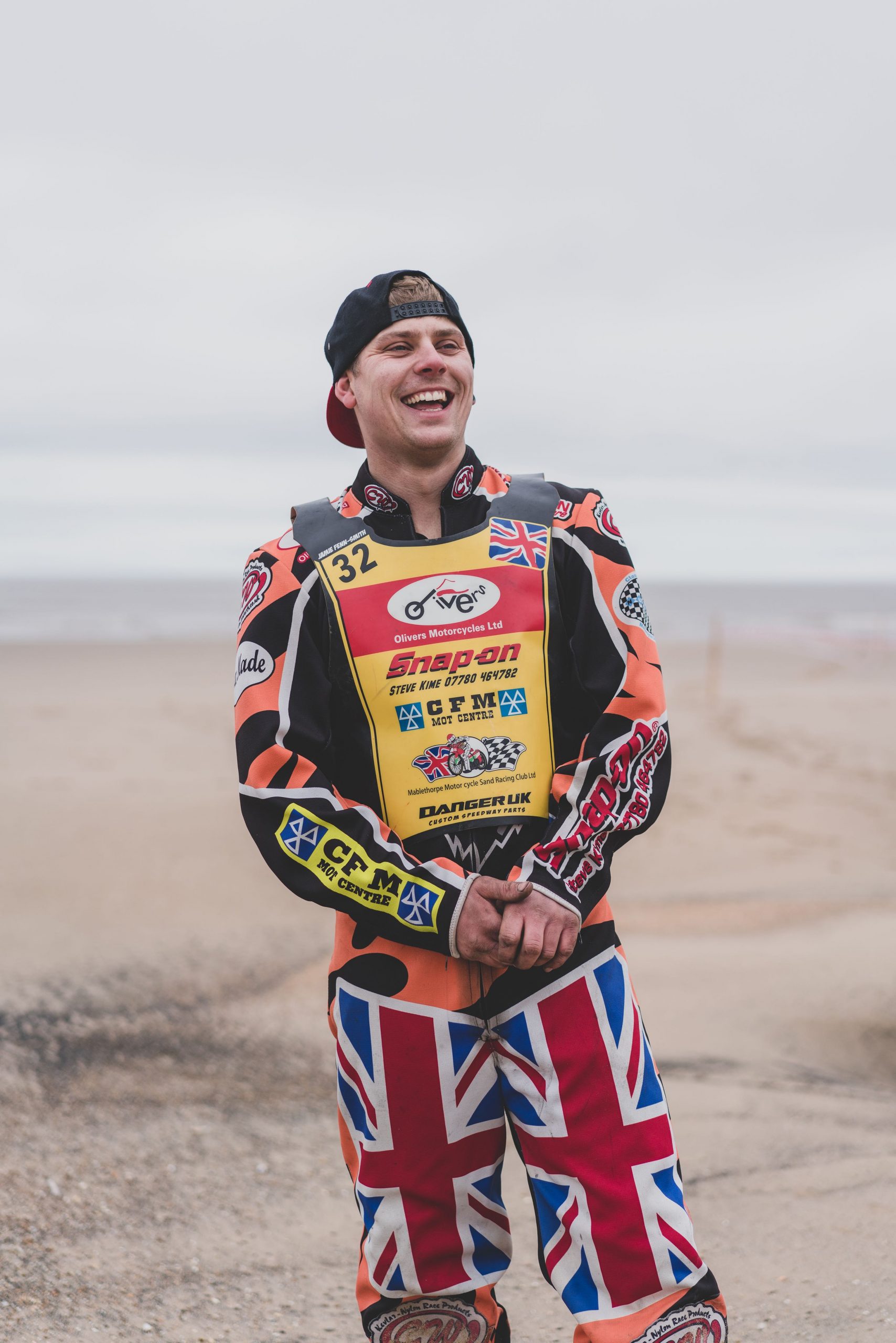 “It all started with my old man,” says Jamie, who used to watch his dad race at Mablethorpe when he was a kid.

After his father suffered a big accident, Jamie and his brother “took over” and began racing themselves. Now, as well as racing, he’s a committee member too: before each race, he checks the bikes over to ensure they’re safe.

Mablethorpe Sand Race isn’t part of the Auto-Cycle Union [ACU], so competitors don’t need a license. As long as their bikes don’t pose a danger, anyone can just turn up and ride. For Jamie, it’s this kind of free-spirited attitude that best defines the event.

“It’s more about going home with a smile on your face. I know you’re here to win and all that, but everyone’s friendly. We always have a laugh.”

When asked what he believes the race contributes to Mablethorpe’s identity, Jamie – who is from Sleaford, also in Lincolnshire – grins.

“It seems to be busier during the winter than it is in summer!” he says. “I mean, how many other beaches do you see in the winter with crowds watching people go round on a motorbike?!” 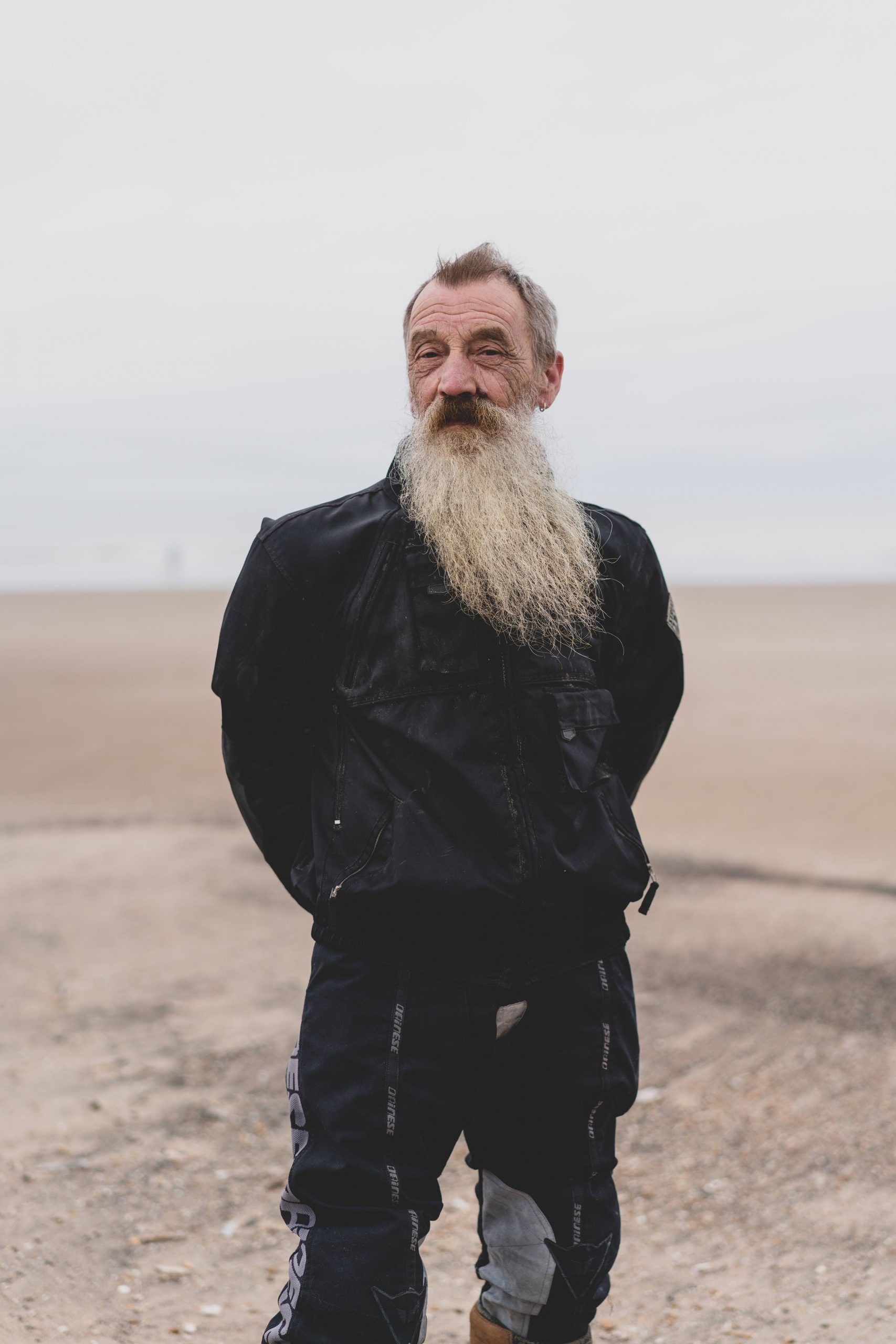 “If you don’t [fall off] you’re not trying hard enough, are you? You’ve gotta push yourself to the limit in any extreme sport. That’s what you’re there for.”

Michael Shook – known to his friends as ‘Pip’ – has been racing for around 40 years. Having been to many events across the UK, he believes it’s the atmosphere that makes Mablethorpe unique.

“It’s relaxed. It’s fun. You’re under no pressure, there’s less people [involved]. Other races I’ve been to, people didn’t speak to you, they wouldn’t lend you a part for your bike if you needed it. But here it’s different – everyone’s friendly, that’s what we like about it.”

Pip discovered the sand race 15 years ago, when, having attended a bike rally nearby, he called in at Mablethorpe on the way home and happened to stumble upon the beach event. He’s been coming ever since, commuting from his home in Cambridge.

“It’s something to do on a winter’s day on a Sunday,” he adds. “Unfortunately, the timing of the lockdown meant that the Mablethorpe season was unable to come to a proper end. I’m really hopeful we will be able to race again in October, significantly as it was the 50th year last season and would be great to keep it going.

“It keeps me active, plus I do it with my son – so it keeps the family close.” 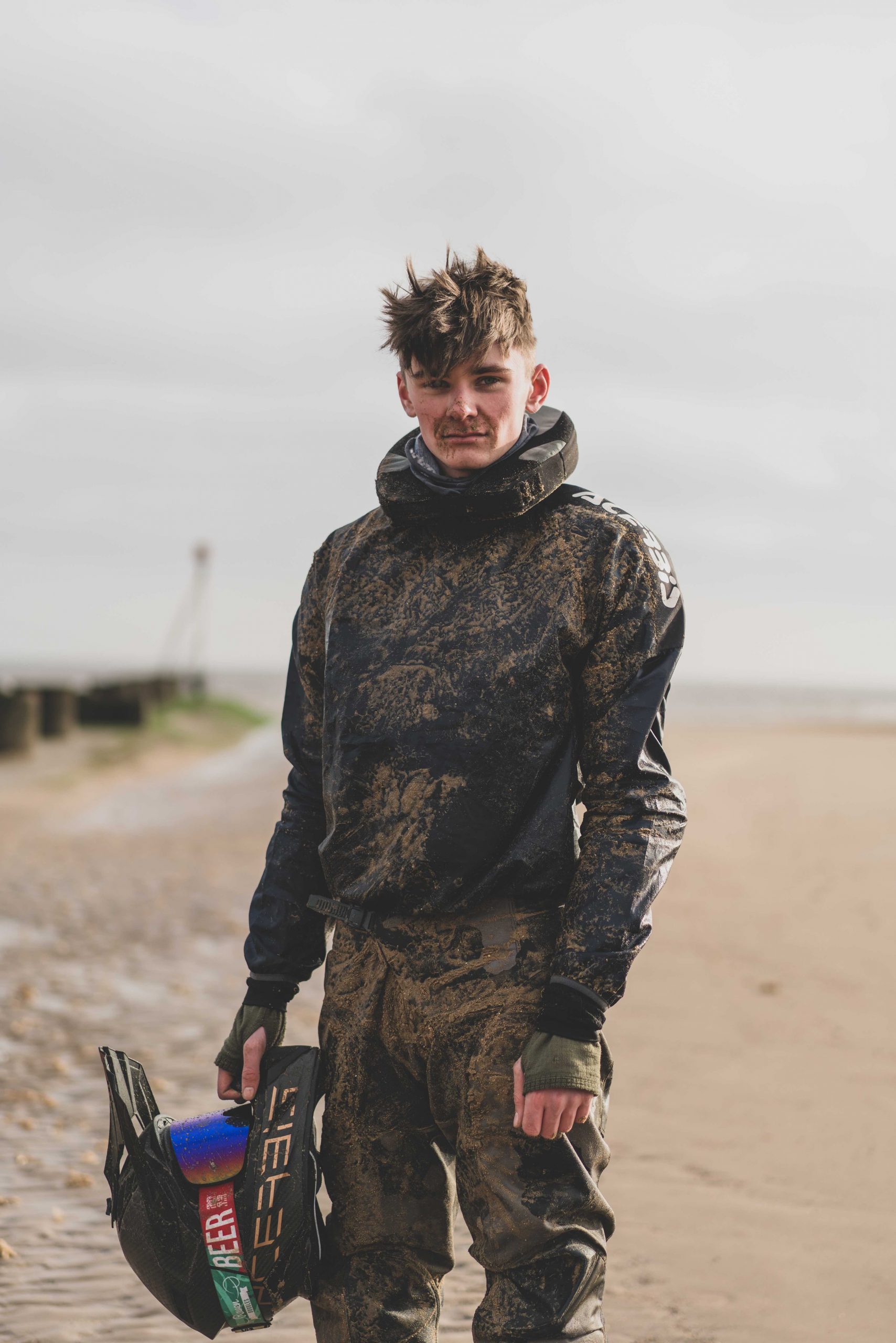 Dylan’s been riding bikes for as long as he can remember. But he first got into sand racing after coming to watch his dad, Andy, race at Mablethorpe.

“One thing that makes it different is the fact that, because it’s on a beach and obviously the sea comes in and out, it’s constantly changing,” he says.

“After every single race, the track is changed – because the sand is malleable. My dad always told me, ‘It’s like nothing you’ve ever ridden before.’ I was like, ‘Sure, whatever.’ But no, the sand – you can’t quite describe it.”

Dylan, who rides his dad’s old Kawasaki 1996 KLX250 – and modified it to make it lighter – believes the event’s relaxed approach is a reason for its tight-knit community.

“Mablethorpe is unbelievably cheap. It’s £35 [to] sign- on and my bike is probably, at most, worth £300. It’s a bit of crap bolted together! Some people do spend ridiculous money, but there’s no regulation at all. It’s about literally just buying a crap bike, riding it on the beach, having fun.” 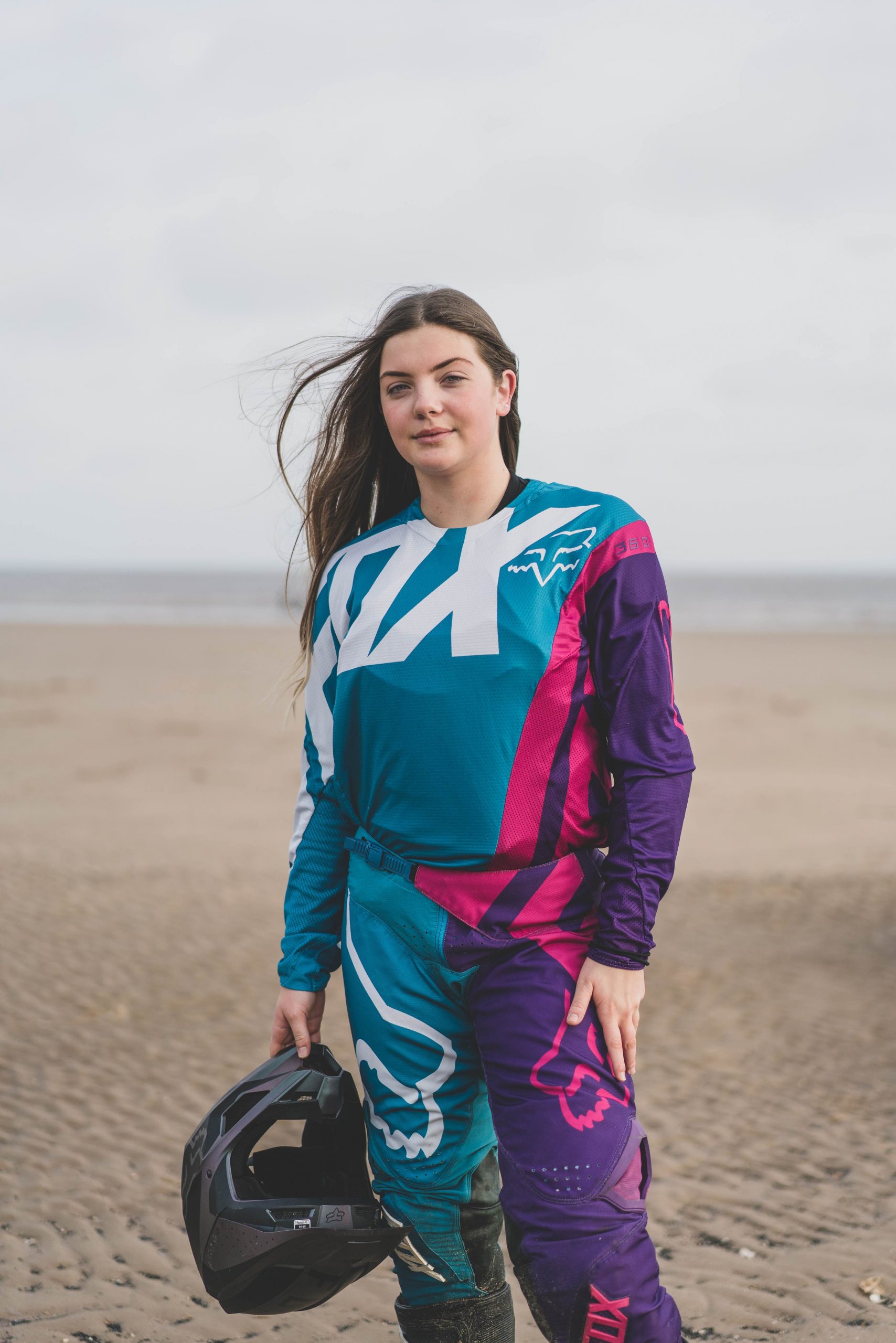 Lizzie, who hails from Cranleigh, a small village in Surrey, has always had an interest in anything with an engine. Although this is only her second year racing, she’s attended every event possible since she started.

“Racing means a lot to me because it’s not just me, it’s a big family thing and everyone has a part to play. It brings us all together and we get to spend time doing what we love.”

Lizzie enjoys beach racing because it’s different to any type of competition she’s done before. While she was suitably nervous ahead of her first time – “What if I went out too wide, or rode off into the sea?!” – all of her worries vanished the moment she set off.

“Although women aren’t the majority in the sport, they aren’t taking it any less seriously than the men are,” she emphasises. “All the lads are always ready to give me a hand with anything, they’re always giving me pointers. I’ve never had any trouble racing alongside them – just enjoyment.” 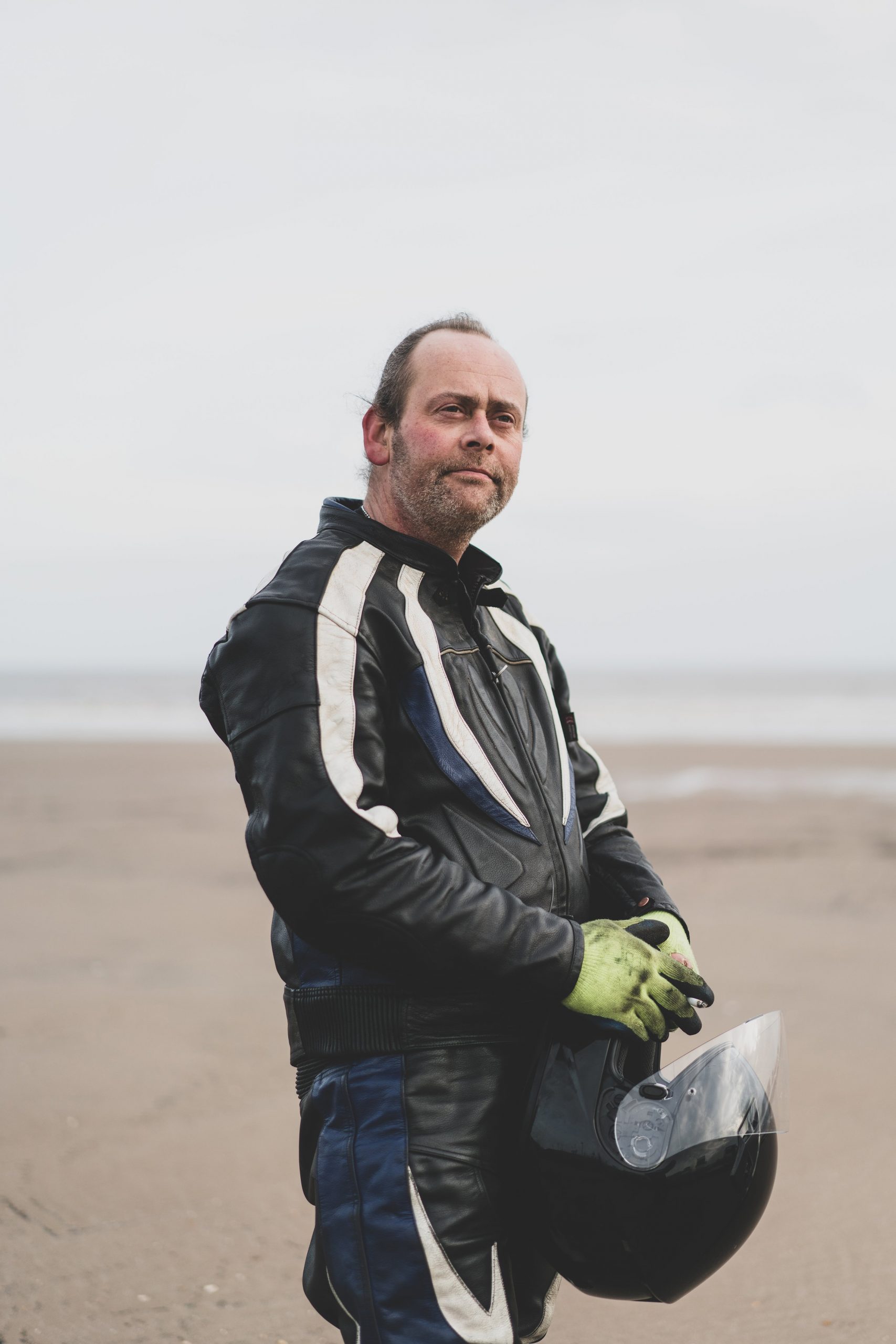 “Around the local area, people all know about the sand racing – it’s part of the furniture,” says Dave.

Dave grew up nearby and started racing when he was 15. He has been attending on and off ever since. “I did a load when I was a teenager. Had a good number of years off, but I’m back again now!”

The Sand Race community is an eclectic one, and that’s what Dave loves about it. People of all ages turn up – from pre-teens to people in their 70s – and ride a host of different machines. “No matter what you’ve got, as long as it’s on two – or three – wheels, you can ride it.”

Everyone is welcome, whether they’ve been coming for years or it’s their first time. While competitors have different reasons for turning up on the day, Dave believes they all get the same thing out of it at the end: escape.

“More than anything, it’s a complete and utter break. Literally on the start line, everything kind of goes away. In a roundabout way, it’s almost like meditation. You can clear your head and that’s it – you just go.” 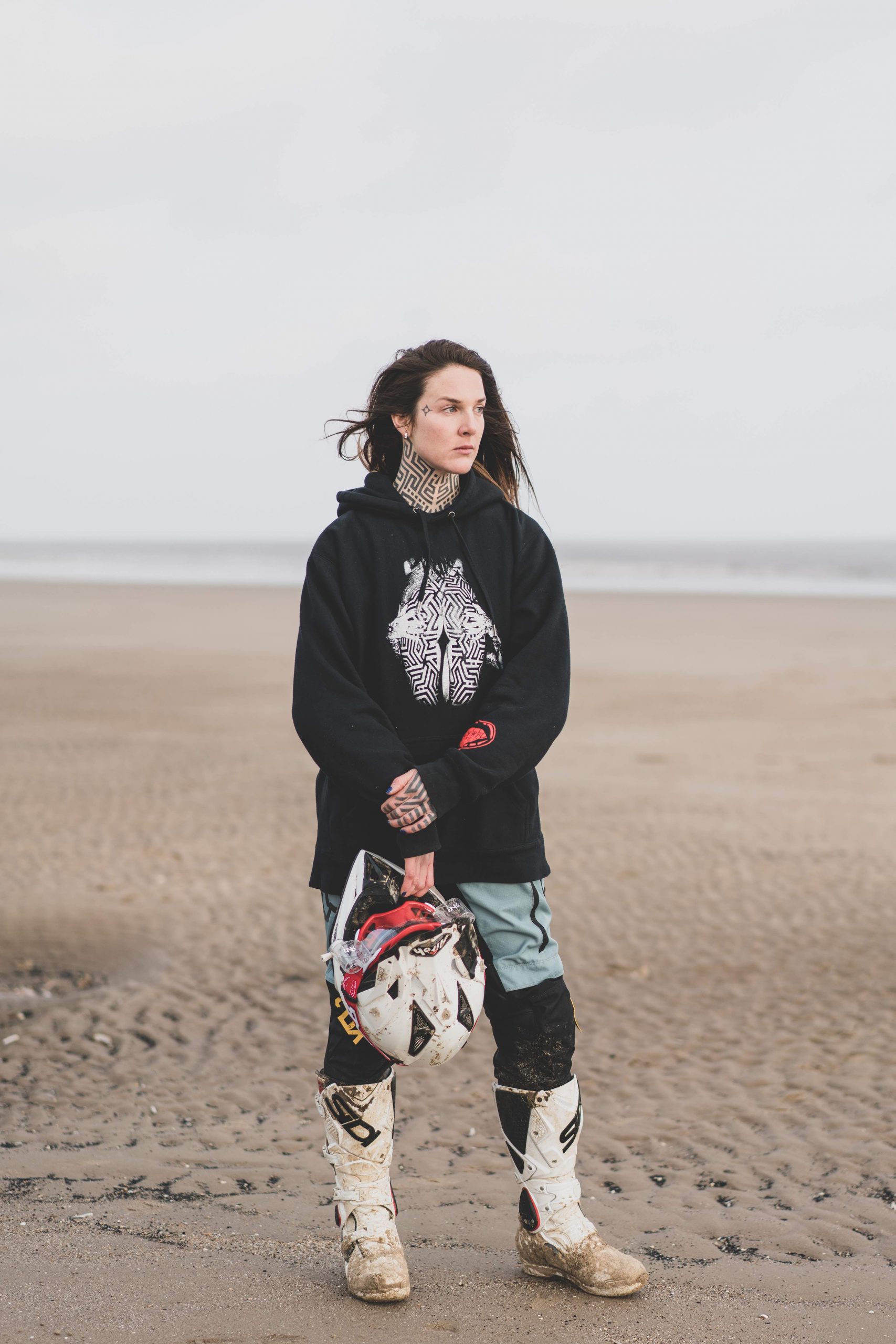 “Sand racing is different in the sense of the freedom and grassroots nature of it,” says Stephanie, who learned to ride three years ago.

“There are no Instagram influencers, no publicity, no sponsorship, it’s just back-to-back racing. You are on your bike every 10 minutes, going full throttle on a beautiful beach.”

Although she feels competitive when she’s there in the moment, Stephanie says she is never racing to win. Rather, it’s an opportunity to be part of something with a wider network of people.

“I don’t really care where I come as long as I know I am pushing myself and having fun.”

Linkedin
RELATED ARTICLES
OTHER ARTICLES
Theo McInnes’s photos of the annual event provide an intriguing snapshot of contemporary Britain.
AI companies that develop image-generators using copyrighted artwork from the internet are coming under fire from artists who say that it amounts to theft.
Filmmaker Laura Poitras discusses her new documentary which traces the remarkable life of the artist-activist and the impact of her battle against the US opioid crisis.
Following the release of his debut single, Deyaz talks battling addiction, dealing with his struggles through music, and building a budding music career from his living room.
After fleeing the war in Ukraine, people are finding it impossible to secure affordable and decent housing in the UK.
At his West Bank restaurant, Fadi Kattan established himself as the voice of modern Palestinian cuisine. Now, he’s bringing his innovative, bold flavours to the UK’s capital.